The use of religion to buttress political ambition is nothing new. But research suggests recent years have seen religion being used as political capital in a distinct way among populists. 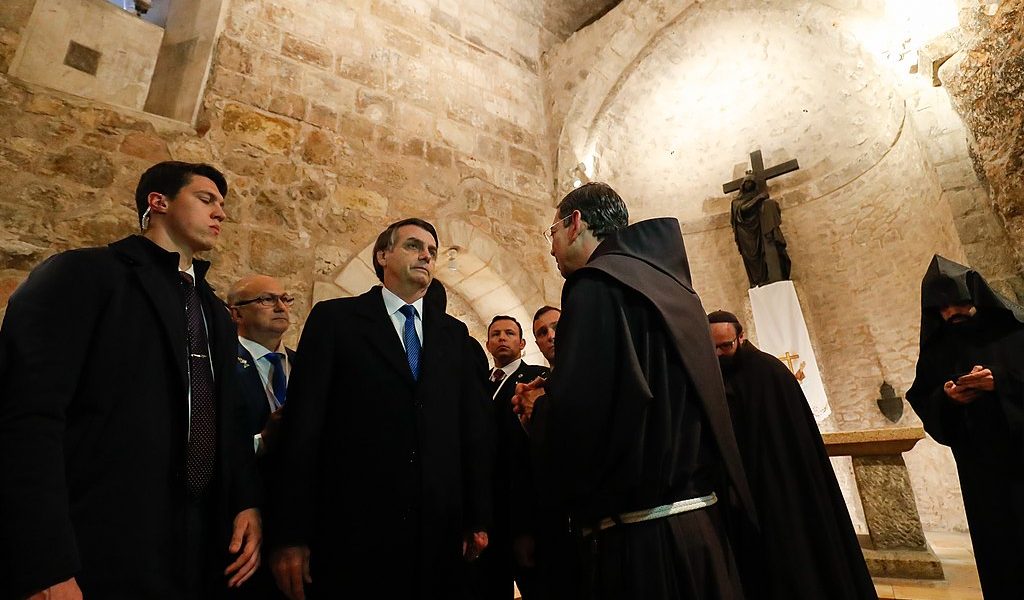 Jair Bolsonaro visits the church of the Holy Sepulchre while on a trip to Israel on April 1, 2019. Photo: Wikimedia Commons/ Palácio do Planalto CC BY 2.0.

This autumn’s Brazilian presidential election offers a glimpse of how 21st century populist leaders are using religion to enthuse their support base. The incumbent, right-wing firebrand Jair Bolsonaro, rose to power in 2018 with support from evangelical Christian voters who warmed to his social conservatism.

And while some polls suggest this support may have eroded since, Bolsonaro continues to court evangelical support. He has framed the election as a battle between God-fearing “good” and opposition “evil”.

On August 13, 2022, he was being prayed over at the March for Jesus rally in Rio de Janeiro among thousands of his evangelical supporters. Opposition candidate and former president Luiz Inácio Lula da Silva is attempting to win those votes back by invoking religious language, reflecting how Bolsonaro has re-shaped the political landscape.

This is partly a matter of numbers – evangelical Protestants make up around a third of Brazil’s population (estimated at around 70 million people) – but it’s also a matter of political style.

Bolsonaro reaches out to the conservative evangelical voter because he needs their vote, but also because their language and values align well with his populist message. Central to Bolsonaro’s politics is a conservative pro-family agenda that includes negative views of homosexuality and abortion.

Populist politicians adopt a distinct style. They are predominantly nationalist, claiming to represent the true will of the people, and yet do so by dividing society into binary camps: who belongs and who does not.

But this alignment of right-wing populism to a Christian base is not just restricted to Brazil. We see it in the bullish authoritarianism of leaders such as former US president Donald Trump, French far right leader Marine Le Pen and Hungarian prime minister Viktor Orbán.

According to sociologists Andrew Whitehead and Samuel Perry, Trump’s rise to power coincided with an upsurge in Christian nationalism. They describe Christian nationalism as a “cultural framework – a collection of myths, traditions, symbols, narratives, and value systems – that idealizes and advocates a fusion of Christianity with American civic life”.

In their research, Whitehead and Perry find that those US citizens who were most supportive of Christian nationalism are more likely to support authoritarian kinds of leadership, “traditional” models of the family and an understanding of American identity that privileges those who are Christian, white and native-born. They were also most likely to vote for Trump in 2016.

Bolsonaro, known by some as the “Trump of the Tropics”, is an open admirer of the former US president. Narendra Modi has remained a strong supporter of Hindu nationalism during his tenure as prime minister of India.

In Turkey, Recep Tayyip Erdoğan, president or prime minister for most of the past 20 years, has rallied an Islamic populism. Erdoğan’s Justice and Development Party claims to defend the values of Turkey’s Muslim majority against its secular elite.

The link between religion and populism is, in part, a matter of rhetoric. Populism favours the language of binary distinctions – truth and falsehood, right and wrong, us and them, citizen and immigrant. Certain forms of religion organise the world into similarly dualistic categories, grounded in a belief that the universe is divinely ordained to be this way.

Populists also claim to appeal directly to the will of the people, rejecting the authority of “elites”, attacking the media, the political establishment, universities, the intelligentsia, or big business.

Populism is not always associated with religion and nor do populists always use religious language. But the connection is strong, even if it is not always simple. For example, religion is not universally adopted by populists as an ally.

Across Europe, anti-Islamic sentiment has long been invoked by right-wing nationalist movements. Marine Le Pen’s National Rally party (formerly the Front National) now campaigns for the “de-Islamisation” of France, presenting Muslims as both a security threat and an alien cultural presence. Religion serves as a marker of who does not belong.

Coalitions of religious-populist movements have found common cause in their opposition to what is presented as a liberal, “woke” agenda. Orbán’s recent appearance at the Conservative Political Action Conference (CPAC) in Texas provides a striking illustration. CPAC has become a major rallying point for Christian nationalists in the US, and this year’s gathering culminated in a closing speech by Trump.

Also read: When You Don’t Address the Deep Roots of Racism, You Get Orban’s Hungary

Like Trump, Orbán characterises his political ambitions as a fight against the “enemies of freedom”, a “culture war” with the forces of “woke” liberalism. Addressing CPAC delegates, he described Hungary as “an old, proud, but David-sized nation standing alone against the globalist Goliath”.

Use of religious images

Orbán’s use of biblical imagery is not unique among populist politicians. Trump has been compared by some supporters to King David: an imperfect but anointed leader.

Trump has advanced the evangelical Christian cause through his decisions as President. He used his executive power to court the conservative Christian vote, with monumental consequences for the American people.

During his four years in office, he appointed three justices to the US Supreme Court, tipping its balance in a conservative direction and reinforcing his standing with the Christian right. This led to the controversial overturning of Roe versus Wade, the ruling that had protected the right of American women to have access to abortions since 1973.

Also read: The Last Barrier Against Communalism in India

The use of religion to buttress political ambition is nothing new. But my research suggests recent years have seen religion being used as political capital in a distinct way among populists.

We are witnessing the strategic, cynical use of religion as a means of furthering nationalist, conservative agendas. It achieves momentum precisely because of the ideological similarities between populism and certain forms of religion that aspire to transform the social order.

How these changes influence religious communities at the grassroots level is not yet clear. But where alignments with religious traditions bear political fruit – as in Brazil, the US and Turkey – we can expect those seeking power to carry on trying to use it for their own ends.

Mathew Guest, Professor in the Sociology of Religion, Durham University