Internal politics has ensured that Dominic Cummings and Lee Cain are ousted as the British prime minister aims for a more positive image. Britain is in crisis over Brexit and the coronavirus so one would expect the prime minister of this epitome of a stable democracy to be hard at work running his government, negotiating with the European Union and overseeing anti-pandemic measures.

Instead 10, Downing Street, the heart of the British government and the prime minister’s home, has had its own escalating crisis for the past week, which led on Friday the 13th afternoon to Boris Johnson throwing out his two main advisers, Dominic Cummings and Lee Cain. As has been widely reported, he told these old allies from the Brexit campaign to leave and not return, though they would be paid till the end of December.

The style with which Cummings, who was Boris Johnson’s chief advisor, walked out of the front door of Downing Street illustrated his ego and disdain for authority. He provided virtually every British newspaper with a front-page picture of him leaving carrying a cardboard box of his belongings – including, some reports suggested, Johnson’s and other secrets he would now leak. Cummings knew there would be photographers waiting on the pavement opposite, and he was later pictured going to his London home carrying a bottle of champagne in a plastic bag.

His departure has been discussed since he undermined the government’s coronavirus lockdown by driving 250 miles to his north England home in May when he should have been isolating at home.

He has survived till now because Johnson relied on him for policy and direction, allowing him to wield power over the choice (and dismissal) of cabinet ministers and their aides, plus influence even over pandemic scientists, and maybe even over contract awards – there are reports of pandemic projects being awarded to firms to which he had links. Cummings’ central ambition was to dramatically transform the machinery of government, making it more centralised and efficient, which he has failed to achieve.

The defeat of US President Donald Trump, who has been Johnson’s role model, means that the prime minister has in the past week lost the three men who have sustained him since he took office last year. Encouraged no doubt by Cummings, he liked Trump’s style and welcomed his support for Brexit. He is also said to have admired – and aped – the president’s disregard for truth and convention, his disdain for opponents, and his style of riding roughshod over officials and critics. 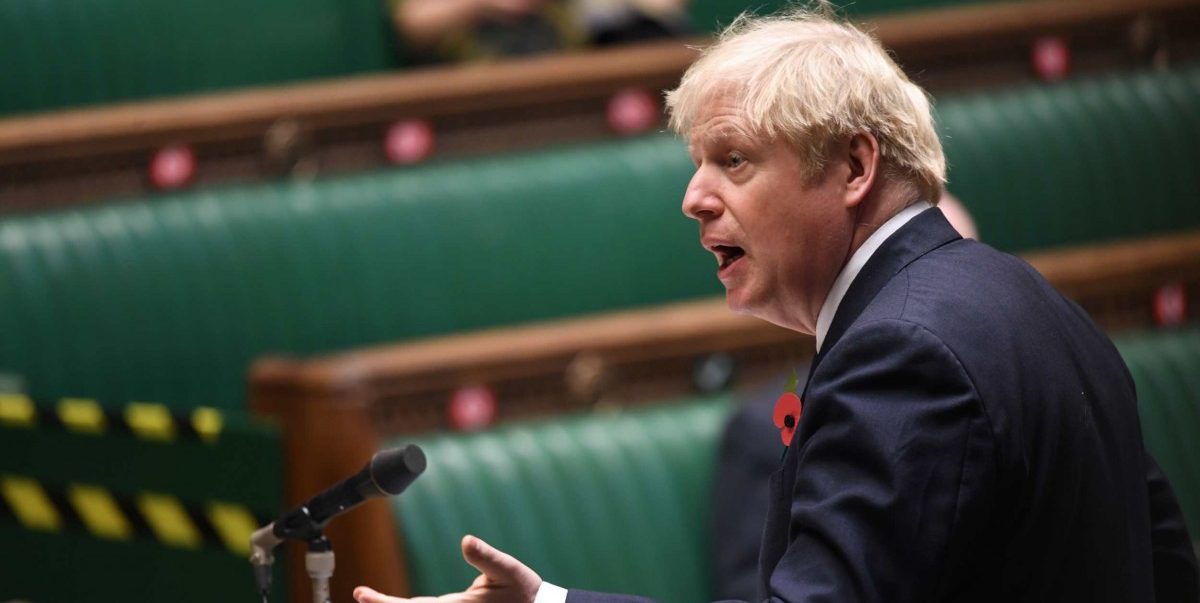 There have been some suggestions that the imminent passing of the Trump era led Johnson to hasten Cummings’ exit, which was already being discussed, maybe to happen early in January after Britain seals its departure from the European Union (EU).

Joe Biden deplores Brexit and wants Johnson to strike an exit trade deal with the EU. He has warned that negotiations on a US-UK trade agreement would hit problems if Johnson’s option of a no-deal Brexit on December 31 led to trade barriers that endangered peace in Northern Ireland.

Johnson was among the first foreign leaders Biden spoke to this week, which bodes well. But it would be difficult for Johnson to draw close to the new president with Cummings, and the other departing adviser, Lee Cain, the head of communications, sniping in the corridors of Downing Street and leaking to the media.

The immediate reason for yesterday’s drama appears however not to have been such important policy and diplomacy issues but evidence that Cummings and Cain had been feeding the media with stories not just about Johnson, coronavirus lockdowns and Brexit, but about his fiancé, Carrie Symonds, who lives “above the shop” in Downing Street with their six-month-old baby son, Wilfred.

Johnson ordered a leak inquiry after The Times and Sky News reported late on October 30 that England’s second nationwide shutdown – which he had been resolutely resisting – would be ordered for the following week to stem escalating coronavirus cases and the risk of mass deaths. This had been discussed at a Downing Street meeting that day but Johnson, who preferred regional restrictions, wanted more time to make a decision. The leaks however bounced him into announcing the shutdown on October 31. He was reportedly furious, and the inquiry is believed to have indicated that Cummings and Cain had instigated the leaking to force his hand.

There have been other leaks in recent weeks alleging Johnson had not fully recovered from his serious COVID-19 attack and hospitalisation in April, that he could not concentrate for long, and was not up to the job. There were also reports in the past two days that Cummings’ allies complained about Johnson “dithering”, saying they had to go for decisions to Michael Gove, the cabinet office minister, with wide-ranging duties that include Brexit.

Johnson’s fiancé Symonds, the leaks said, “bombards him with texts setting out her opinions on policy up to 25 times per hour”. It was also reported that Cummings loyalists’ nicknames for her included “Princess nut nuts”.

“A source said she was labelled a ‘princess’ for allegedly being high maintenance and acting regally,” reported the normally pro-Conservative Daily Telegraph. “The first ‘nut’, according to the source, alluded to her being ‘crazy’ – there is no evidence for that – while the second ‘nuts’ reference comes from a belief among the ‘Brexit Boys’ clique that she bears some facial similarity to a squirrel.”

Symonds has kept a very low profile since her son was born, so it is not surprising that Johnson was furious when her name appeared in newspaper stories – in some cases with such similar wording that it looked as if there had been a single source.

There were reports that Symonds, who has a background in public relations and headed the Conservative Party’s press office for a year before joining up with Johnson, led objections in the past week to Cain being made the prime minister’s chief of staff – a post which is vacant and was till yesterday informally filled by Cummings.

Cain wanted the job when he saw his power being eroded by Johnson’s appointment of a former journalist and television reporter, Allegra Stratton, to be his new press secretary. Stratton left journalism earlier this year to work for Rishi Sunak, the Chancellor of the Exchequer (finance minister), and Johnson was impressed with the positive image that she successfully produced for him and his work.

Starting in January, Stratton will give daily government press conferences in the style of the US president’s spokespeople. This has never happened before in the UK and would make her the effective mouthpiece for the whole government, strengthening Johnson’s (and Cummings’) aim to centralise power in Downing Street. Her appointment was therefore controversial beyond Downing Street’s power squabbles. Cain’s bid faced the combined opposition of Symonds and Stratton plus, according to some reports, Priti Patel, the home secretary, and Munira Mirza, Johnson’s low profile but very influential director of the Number Ten Policy Unit, who earlier worked for him when he was mayor of London. Together, they are said to have objected to Cain’s brutal style and to the “laddish culture” that he and Cummings led, though Symonds’ part here is controversial since she has no official role.

Lurking in the background is the ominous figure of Michael Gove, who scuppered Johnson’s first bid for leadership of the Conservative Party in 2016 after the Brexit referendum and stood himself, unsuccessfully. They had been allies, but Gove said Johnson could “not provide the leadership or build the team for the task ahead”. Gove stood against Johnson in 2018 and was again defeated, but was given a central job in the Cabinet Office.

Cummings worked for Gove earlier at the education ministry and the two men are known to be close, whereas there has not been a similar allegiance with Johnson, even though they all worked together on the Brexit campaign. It seems hard to believe therefore that Cummings – and Cain – could have been doing the media leaks without at least tacit approval from Gove, and that leads into a myriad of conspiracy theories about Gove’s ultimate aims and survival tactics. He is now somewhat isolated at the centre of the government and, some reports suggest, will be moved.

Stratton intends to have a more open and cordial approach to the media, reversing Cain’s and Cummings’ combative style and, hopefully, improving the presentation of government policy which has been chaotic throughout the pandemic with mixed messages and policy reversals. Public trust in the anti-pandemic measures, and in Johnson as prime minister, has been declining rapidly. Conservative MPs, who have been despised and ignored by Cummings, have grown vocally impatient.

The question now is whether the departure of his old Brexit colleagues can lead to Johnson changing. Both Cummings and Cain – and Johnson – were expert campaigners, first for Brexit, then Johnson’s party leadership bid, and then last December’s general election, but none of them has shown an ability to turn those skills into governing. Yet the two advisers have provided Johnson with what has been described as an “ultimate human shield, the lightning conductor for all the hostility from Whitehall and politicians”.

Watching British television over the past year, it has looked as though Cummings and Cain arranged for Johnson to be out of the office visiting factories, hospitals and construction sites as often as possible, as if he was still campaigning. He would dress up in protective suits and overalls with an array of hats, jogging up and down on camera as he delivered his message of the day. Back in the office, they were presumably doing the detailed work that he has shunned throughout his career.

Some critics suggest that Johnson has never wanted to actually do the prime minister’s job. He enjoyed decades of being billed as a possible future prime minister, he thrived on the campaign trails and he will revel in being a previous prime minister, but the work is neither what he wants to do, nor what he is cut out for. If that assessment is correct, he now needs to find a way to ensure that when he eventually leaves the job, he will not be known for having been Britain’s most unsuccessful prime minister during its worst peacetime crisis.