The British prime minister has a long history of rule breaking and disdain for the truth but he always manages to slip out. 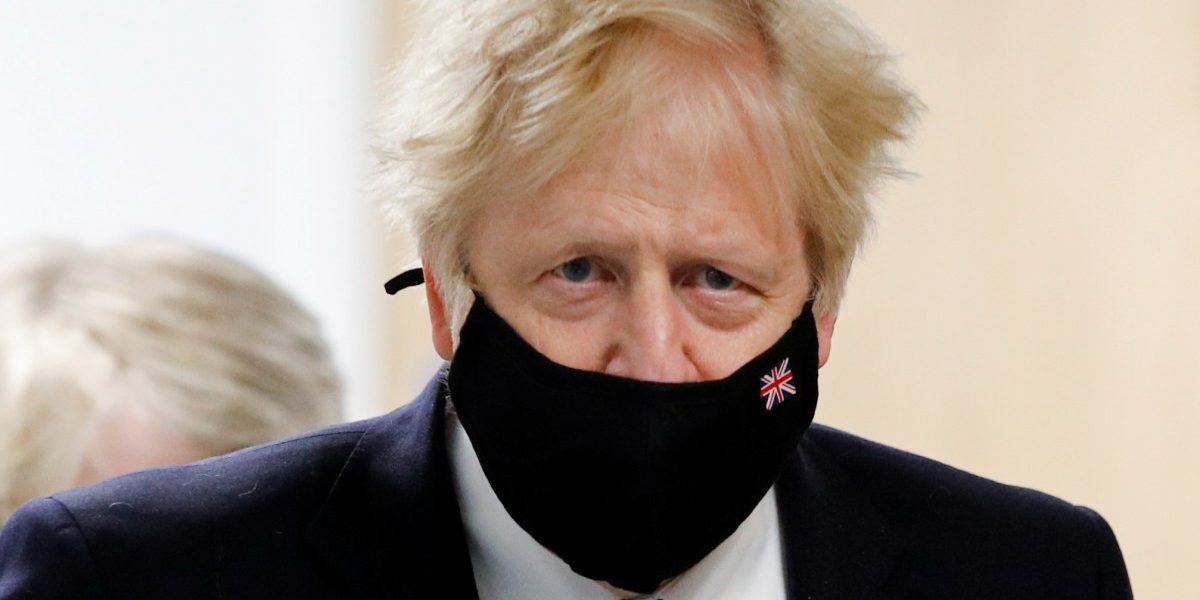 If Boris Johnson was chairman of a big corporation, he would surely have had to resign on January 31 after an official report was published that condemned “failures of leadership and judgment” in his office and home at 10 Downing Street. The report, written by Sue Gray, a top civil servant, also covered the adjacent Cabinet Office and listed over a dozen potentially illegal parties that were held during the past two years of strict Covid lockdowns and social distancing.

Instead, Johnson gave a rumbustious and insensitive performance in parliament, apologising for at least the third time in as many months for crises around his role as British prime minister. He took “full responsibility”, which has become his confessional route of avoiding the need to acknowledge and absorb detailed criticism – but showed no sign of changing his ways.

“I want to say sorry. Sorry for the things we simply did not get right and sorry for the way that this matter has been handled,” he said, humbly wagging his head. “It is not enough to say sorry. This is a moment when we must look at ourselves in the mirror and we must learn.” He then outlined planned organisational changes in Downing Street and the Cabinet Office that had been demanded in the report, but gave no hint however that he, personally, had to learn or change.

“I get it and I will fix it”, he added, no doubt hoping he was giving instant splash headlines for the next day’s papers. But they instead led with “A failure of leadership”, “Zero Shame”, “PM pleads for his job” and “Johnson rejects calls to quit”.

The report said that “at least some of the gatherings in question represent a serious failure to observe not just the high standards expected of those working at the heart of Government but also of the standards expected of the entire British population at the time”. There had been “too little thought given to what was happening across the country in considering the appropriateness of some of these gatherings, the risks they presented to public health and how they might appear to the public”.

Despite all that, after two months of mounting crises with allegations of lying and misleading parliament (a resigning offence), Johnson has  so far avoided being ousted from his post as prime minister.

He is now staging what must be the most audacious of the many recovery coups that have rescued his disaster-strewn career.

Two weeks ago it looked as if his time in office was about to end, even though he had won a landslide general election victory for his Conservative Party in 2019, and then fulfilled his pledge to take Britain to its Brexit future outside the European Union. Last year he led a highly successful COVID-19 vaccination programme. Britain acted faster and more effectively than most other countries in stark contrast to his unfocussed mismanagement of the pandemic early in 2019. Johnson then looked good for maybe 10 years in power.

Also read: UK: Boris Johnson Polling Is Now So Bad That Conservative MPs Should Ditch Him

Throughout his career, however, he has displayed disdain for established institutions and scant respect for the truth. This has led to the current flood of crises, with his credibility plummeting both among Conservative members of parliament and the party’s countrywide membership. Last month it looked as though there might be a vote against his leadership, which needs to be triggered by 54 (15%) of the 359 Conservative MPs. Johnson’s allies have cajoled and bullied many of the likely rebels into line, but the number is still rising.

The crisis built up from the end of November after a story in the Daily Mirror about Christmas drinks in Downing Street the previous year. That led to a stream of media reports of a total of 12 parties held in Downing Street offices and gardens between May 2020 and April 2021, with at least three being attended by the prime minister. Also leaked were details of three parties in the adjoining Cabinet Office and one in the education ministry.

One party was in Johnson’s private Downing Street flat (November 13, 2020), and one was in the Cabinet Room on his birthday (June 19, 2020) with a cake brought by his wife Carrie. Gatherings of two or more people indoors, and more than six outdoors, were prohibited at that time – Sue Gray’s report has the restrictions’ details and dates.

One of the worst apparent breaches was a party in the Downing Street garden on May 20, 2020, organised by a top official with a “bring your own booze” invitation at a time when outside recreation was officially allowed with only one person. The most publicly shocking was a party (without Johnson present) that went on late into the night on April 16 2021, the eve of the funeral of 99-year old Duke of Edinburgh. That party was contrasted in the media with a striking picture of Queen Elizabeth sitting in the funeral service the next day with no one alongside her because she was abiding by the COVID-19 distancing rules. 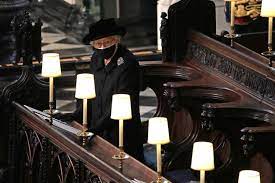 Britain’s Queen Elizabeth is seen during the funeral of Britain’s Prince Philip, on  April 17, 2021. Photo: Yui Mok/Pool via Reuters

Throughout, Johnson has obfuscated (some say lied) and never admitted that anything wrong was done. To begin with, he refused to admit to any knowledge of the parties, later claiming they were either work events or in line with COVID-19 restrictions which they clearly were not. Asked in parliament on December 8 whether he would confirm the November 13, 2020, event happened, Johnson replied: “No, but I am sure that whatever happened, the guidance was followed and the rules were followed at all times.”

Johnson fended off the stream of leaks by ordering an inquiry on December 8 by his cabinet secretary, who had to withdraw after a few days because of an on-line quiz that had taken place in his office. He was replaced on December 17 by Gray, who is a highly respected and experienced civil servant, but the leaks continued. Johnson swept them all aside saying “wait for the Sue Gray report”, but by the beginning of last week it was becoming apparent that her report would be damming with a massive amount of detail.

It is debatable whether what happened next was a clever plot or happenstance. It involves Cressida Dick, London’s highly controversial Commissioner of the Metropolitan Police. Dick’s five-year posting was extended last September for two years by Priti Patel, the home secretary and a committed Johnson supporter, who rejected widespread calls for the commissioner to be replaced.

On January 25, Dick unexpectedly announced that The Met was conducting inquiries into the parties, reversing the established police line that it was not looking into long-past COVID-19 regulation cases. The Met then asked Gray to make “minimal reference” to eight events it was investigating.

Gray then did substantial redrafting over the weekend to remove the bulk of the report and she also downgraded the title to a mere “Update” because it contains none of the expected analysis of the 16 cases.

That suited Johnson because it prevented publication of potentially incriminating information that could escalate the crisis around his leadership, possibly showing, that he misled parliament, which would lead to widespread calls for his resignation.

The Metropolitan Police (The Met) said on Monday that it was reviewing “more than 300 images and over 500 pages of information” on the allegations. Some photos are reported to incriminate both Johnson and his wife Carrie who could be fined, along with officials and guests.

The police intend to fine anyone found guilty of breaking the regulations – £200 (Rs 20,200) for the first offence rising to a maximum of £6,400 (Rs 6.5 lakhs) for repeat offences – but say they will not announce the names. Appeals will go to court for trial by judge and jury.

Under pressure from MPs, Johnson has reluctantly agreed to ask Gray for a further update when the police inquiries are completed, but it is not clear if he is still resisting publication of a full detailed report. His spokespeople have indicated he might be willing to say if he has been fined.

Johnson now hopes that the police inquiries, which could last weeks, will give him time to rebuild his prime ministerial momentum so that public interest in the parties scandal ebbs away and MPs decide not to try to evict him. On Feb 1 he flew to Ukraine for crisis talks that provide photo-ops and sound bites, and substantial policy initiatives are planned.

Many of the leaks about the parties are reported to have come from Dominic Cummings, Johnson’s maverick and divisive former chief of staff who he sacked in November 2020. Cummings is determined to get Johnson removed and can be expected to produce new leaks and allegations that have already started appearing in the newspapers. 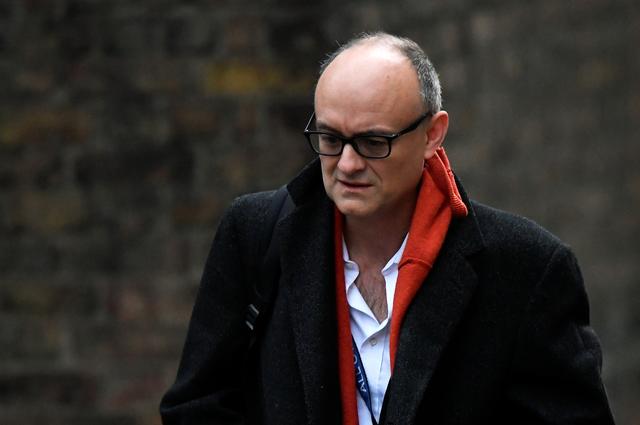 In a recent interview with the New York magazine, Cummings said removing Johnson from power was “an unpleasant but necessary job. It’s like sort of fixing the drains.”

Johnson has a history of rule breaking and re-emerging apparently unscathed. He was sacked as a graduate journalist trainee on The Times in 1988 over allegations he had fabricated a quote. In 2004 he was sacked as a front bench parliamentary spokesman and Conservative Party vice-chairman for allegedly lying to the party leader about an extra-marital affair he had with a colleague on The Spectator magazine where he was the editor.

There have been questions over a businessman helping to fund the £112,000 redecoration of his Downing Street flat and about the funding of two holidays in the Caribbean and Spain while he has been prime minister. An American woman, who claims she had a four-year (much photographed) affair with him when he was London mayor (2008-2016), is alleged to have received business favours.

It may seem odd that such a character with so little respect for conventions and rules can become prime minister. But these are deeply engrained life-long traits. His classic master when he was at school at Eton complained to his father than the 17-year-old thought he “should be free of the network of obligation that binds everyone”.

The reason for his success is that he exudes charm and panache and is a brilliant campaigner, which he has shown with Brexit and various elections. MPs and the party have supported him because they want him to win local council polls in the summer and a general election in 2024. They have known his limitations, which include a chaotic lack of interest in detailed policy issues and a short attention span, but thought they could tolerate them.

The question now is whether his lack of ethics is too serious for his supporters to tolerate and they dump him because he is no longer a vote winner. That would be the logical conclusion for any other politician, but so far his opponents have not united around a single cause and there are no outstanding characters to succeed him. So don’t write him off yet.