Why Boris Johnson Needs the Controversial Dominic Cummings by His Side

The many controversies around advisor Cummings have not shaken the prime minister’s faith in him.

When Boris Johnson walked into No 10 Downing Street in July last year for the first time as Britain’s prime minister, he was greeted by the cabinet secretary, Sir Mark Sedwill, who represents the centre of government power. Standing in the corner, aside from the rest of the staff, was a slim balding middle-aged man dressed in a scruffy t-shirt who would wield power not only over Johnson but across Whitehall.

The man was Dominic (Dom) Cummings, Johnson’s maverick chief of staff, who seems to have been positioning himself in a memorable photograph as the shadowy power behind the throne, operating aside from the system.

On Monday last, Johnson broke all conventions when he allowed Cummings to use the Downing Street garden to hold a press conference to explain why he should not resign or be sacked for breaching COVID-19 shutdown rules by travelling across Britain with his family.

Both men are experts at judging and responding to the public mood. That makes it odd that they have allowed what started as a media and political story in the “Westminster bubble” to become a vehicle for public anger to be vented against the government, reducing Johnson’s authority because he has insisted on keeping Cummings.

Unwisely for an adviser who should, as he must know, remain in the background, Cummings has let himself become the frontline story, with Johnson retreating to the sidelines after he failed in a Sunday press conference to kill off demands for Cummings to resign or be sacked.

Not only is Cummings being hounded by the media outside his north London house in fashionable Islington, he has also been barracked by neighbours. Along with people all over the country who have been contacting their local MPs and writing on social media, they resent the way that Cummings apparently bypassed COVID-19 restrictions, which they had been following strictly for two months.

Fearing that he and his wife had the virus, Cummings should, according to the restrictions, have isolated the family in their London home. Instead, he drove them 260 miles to a house adjacent to his parents’ Durham home in north-east England, justifying the journey by saying there was a relative there who would take care of their son should they fall ill. Later, after being hit by the virus, he drove the family 30 miles to Barnard Castle, a well-known tourist spot, to test (he claims) whether his eyes were good enough for him to drive back to work in London. 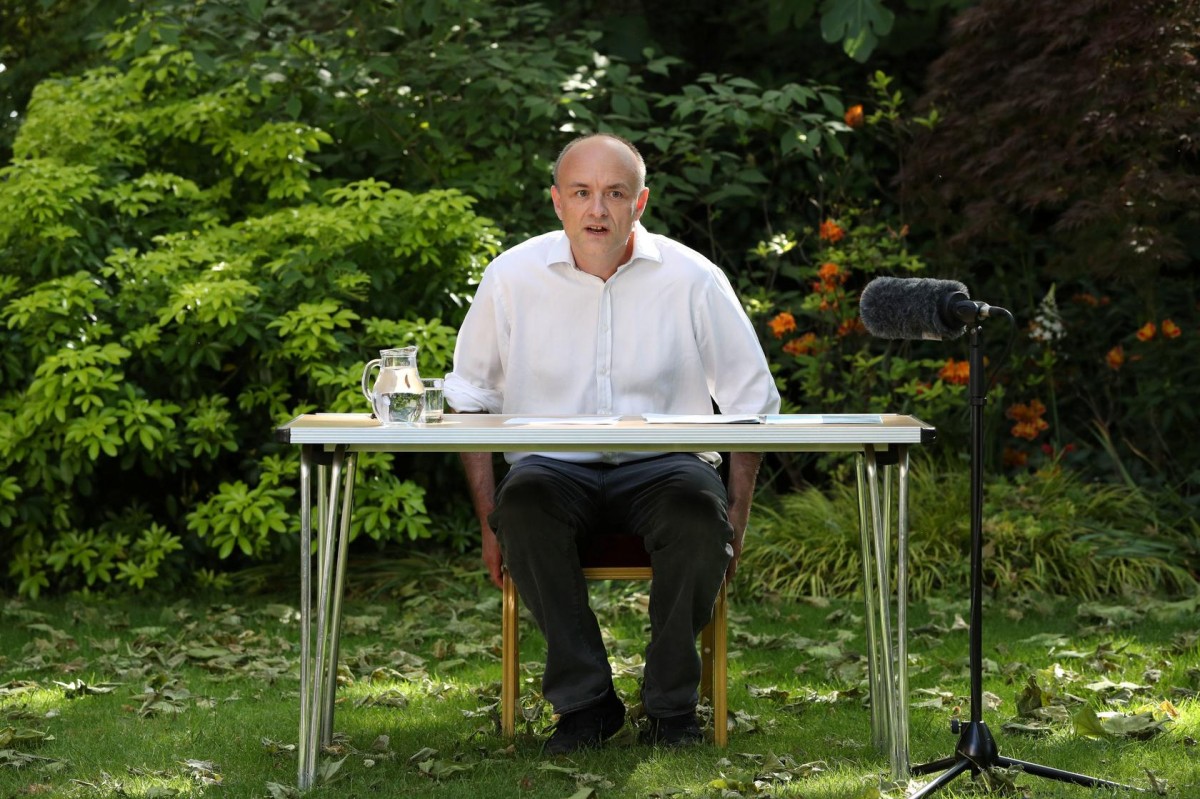 Cummings’ road to power alongside Johnson began with the successful Brexit campaign in 2016 and was followed when he steered Johnson last July to become Conservative Party leader and prime minister, and again when Johnson won last December’s general election.

They both have good if not brilliant brains but, while Johnson is fluffy, frequently unable to string coherent sentences together in public without a written brief, and famously incapable of remembering detail, Cummings is focussed and driven as a disrupter determined to overhaul how government functions.

Dubbed at various times as a Svengali and a Machiavelli, Cummings was once labelled a “career psychopath” by former prime minister David Cameron, who had also said he had a “malign influence” on those he dealt with and gave “bilious briefing to the papers”. He is extremely abrasive, moody and erratic, and can also be insulting about colleagues, once describing David Davis, then the Brexit secretary, as “thick as mince, lazy as a toad and vain as Narcissus”.

Both Johnson, 55, and Cummings, 48, have links to Britain’s elite, though neither is welcomed by the establishment. Johnson’s background is Eton and Oxford. Cummings was also at Oxford after Durham (private) School and has a former court of appeal judge as an uncle. He is married to the Spectator’s commissioning editor, Janet Wakefield, 45, who joined the magazine when Johnson was the editor in the early 2000s. She is the daughter of Sir Humphrey Wakefield, who owns a castle in the socially fashionable Northumberland, and is related to various aristocratic families in the county.

Brexit might well not have happened without Cummings as the leading campaign organiser.  He invented the devastatingly effective “Take Back Control” slogan – memorably recounted last year in the film Brexit: The Uncivil War with Benedict Cumberbatch playing Cummings. He introduced the use of digitally managed audience data to identify and target selected groups with specially designed marketing messaging that would sway opinion and win votes.

Also read: Britain Needs Boris Johnson Back to Lead. But Is He Up to the Challenge?

The slogan attracted voters ranging from committed Brexiteers, who wanted to take back control from Brussels, to ordinary people who, feeling left behind by globalisation, ignored by politicians, and overwhelmed by tides of immigrants, wanted to be in control of their lives.

It had no depth nor was it a detailed policy but, attached to Johnson’s populist campaigning style, it enabled people to reassert themselves behind a dream and a new-style leader. President Emmanuel Macron of France has described the campaign as “lies, exaggerations and cheques that were promised but will never come”.

But this is not a relationship based on Johnson’s gratitude for Cummings’ Brexit and electioneering services. It is much more basic and serious than that, and Johnson has exposed his own dependency by refusing to let Cummings go, even though his own and the government’s popularity ratings have been hit.

Put simply, Johnson probably reckons he could not manage without Cummings in Downing Street. He would lose the anchor who provides him with policy objectives and programmes, and who feeds him with endlessly repeated slogans like the decisive “Get Brexit Done” in last year’s election campaign. Acting under his tutelage and instructions, Johnson has been disciplined into drumming home basic messages and avoiding being mired in details that he cannot remember.

He probably realises that without Cummings he would tend to revert to his habitual role as the unfocused and jokey prankster that he displayed as mayor of London and even as foreign secretary. He would be vulnerable to political and civil service pressures without Cummings’ shield and would need more capable and independent ministers around him than the loyal Brexiteer lightweights that he has now, having dumped all who disagree with him and Cummings. 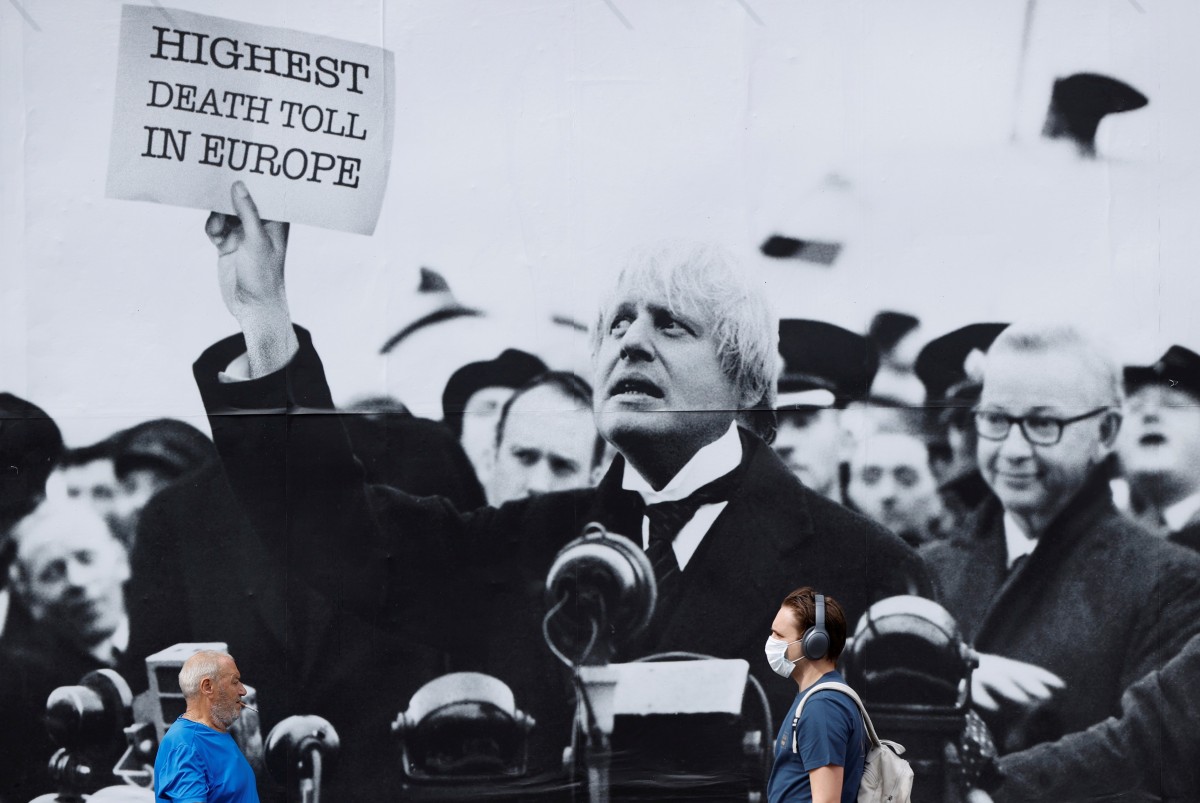 People walk by an advertising bill board of Britain’s Prime Minister Boris Johnson in Kentish Town following the outbreak of the coronavirus disease (COVID-19), London, Britain, May 22, 2020. Photo: Reuters/John Sibley

“The foundation of this UK government is a bunker of close allies surrounded by a lightweight, supine and largely ineffectual cabinet chosen mainly for their commitment to Brexit or their loyalty to Mr Johnson in last year’s Conservative party leadership contest,” the Financial Times said in an editorial on May 27. Rishi Sunak, the Indian-origin chancellor of the exchequer (finance minister), who was appointed in February after Cummings manoeuvred his independent-minded predecessor out of office, is named as one of just two ministers who “show the gravity demanded of a secretary of state”.

When Johnson won the election in January, he and Cummings expected to be leading Britain triumphantly out of Europe, and Cummings was looking forward to attacking the bureaucratic operations of Whitehall that he despises. He wrote on his blog that he was seeking job applications from “weirdos and misfits with odd skills” to work with him in remaking Whitehall.

Neither of them is suited to the task of leading Britain through the coronavirus crisis because they are not capable policymakers or administrators. Johnson likes to delegate extensively and Cummings believes in change through disruption, not orderly management. That must have played some part in recent months’ muddled policies on herd immunity, testing and tracing, social distancing, lockdowns, and airport quarantines. COVID-19 deaths are estimated to total 45,000 and perhaps even 60,000, one of the highest in the world.

Tempting though it might be to suggest that Downing Street and the whole government might function better without Cummings’ erratic and confrontational style, there must be many in the government and Conservative Party who worry that, without him, Johnson would not be able to cope. Since it is not possible, for now at least, to dump Johnson (and the next general election is four years away), some will be arguing that it might be better to keep Cummings as his minder.