Boris and Coronavirus: Can the 'Brilliant Bumbler' Lead the UK in Crisis?

Coronavirus is not the sort of crisis that Boris wanted for his Churchillian dream. 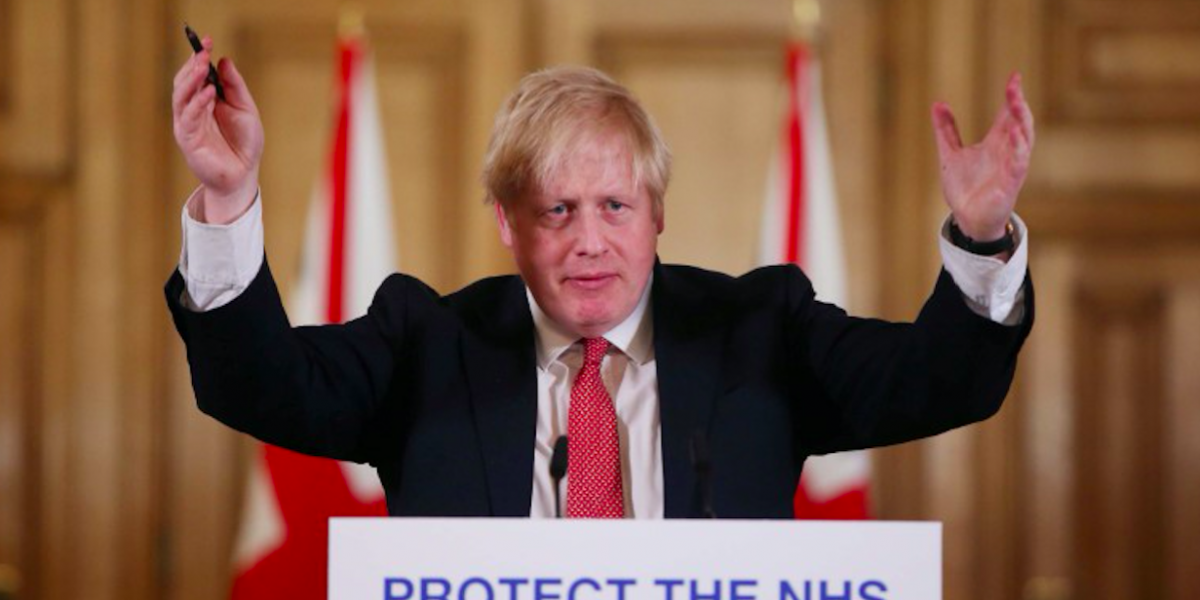 Boris Johnson, Britain’s usually blustering but canny prime minister faces the biggest test of his gilded life. His winning charm has enabled him so far to glide effortlessly from Eton to Oxford and on to journalism, and politics.

Along the way, he has been a jokey Mayor of London and an irresponsibly flippant Foreign Secretary. He has had two wives and an unknown series of female relationships, fathering five or maybe six children (four with a recently divorced long-suffering wife) and another on the way with his fiancé in Downing Street.

He finds it difficult to stay serious in public for long, and he is also frequently in denial, often for personal political reasons. That is now changing, as he showed last night when he broadcast to the nation on television and announced tough restrictions on people’s movements, backed if necessary by police action. He has resisted such draconian moves till now and is still resisting a total lockdown. That has led to criticism of both his failure to face up to the realities of the pandemic and his preference to maintain Britain’s liberal democratic traditions.

The previously most alarming and damaging denial – backed by rumbustious flippancy – was over Brexit, which he successfully but dishonestly sold as the trigger for Britain regaining its former glories of empire. That won him a resounding victory in a general election last year with the compelling slogan “get it done”. Britain formally left the European Union nearly three months ago but is only partially out, pending tough trade negotiations due this year.

Now, coronavirus has triggered a much more damaging state of denial in terms of risks to the lives and health of Britain’s 66 million people. Boris (no-one ever says Johnson) at times seems to find it difficult to replace incapable of replacing his flippancy with the stern approach of other prime ministers, forcing people to face reality with tough measures that he did last night. However hard he seems to try, he sounds earnest, looking sometimes puzzled and even worried, but not (except for last night when he was reading a script) commandingly forceful.

Also read: How the Coronavirus Outbreak Is Also a Socio-Economic Inequality Issue

Narendra Modi was suitably calm with a persuasive paternalistic style when he broadcast on March 19, urging the vast masses of India’s 1.3 billion population to “resolve that we will protect ourselves and save others”, and stay indoors from 7 am to 9 pm on Sunday for a ‘janata curfew’ – which has now become a nearly country-wide shutdown. .

In France, President Emmanuel Macron looked fiercely stern when, with cities already shut down, he warned “we are at the start of this crisis”.

Even Canada’s lightweight prime minister Justin Trudeau stayed serious earlier in the week when he talked about the border with the US being closed.

But not Boris, that is not his way when he goes off-script. On March 19, he managed to be serious for most of his daily live tv media conference but could not resist a headline-grabbing misleading statement, delivered enthusiastically.

“I think we can turn the tide in the next 12 weeks,” he declared to a bemused audience. He ducked a question about where the figure came from, as did one of his advisers when the question was tossed over to him. The next day he repeated the 12 weeks line, downgrading it to a “determination”, even though a group of scientists had that morning advised the government that social distancing would “need to be in place for at least most of a year”. Now 12 weeks is the time that those most at risk are being advised to isolate themselves. 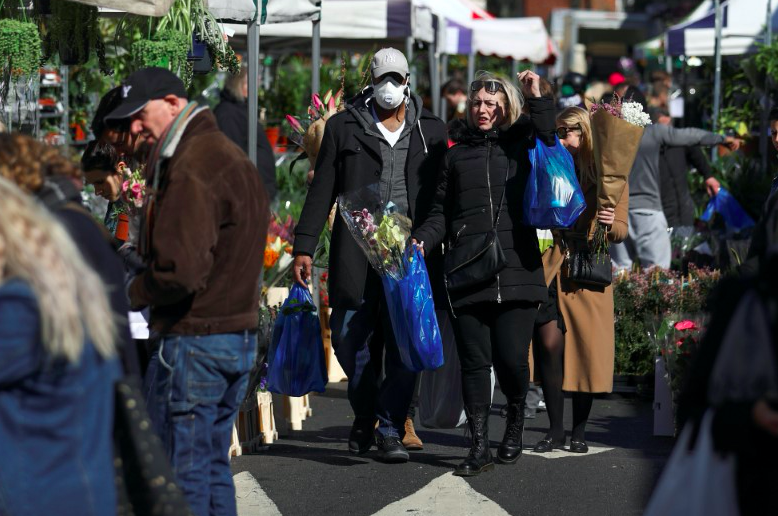 “I don’t want to sound unduly boosterish about things, nor strike that note, but I do think that we will turn the tide with a concerted effort,” said Boris after floating the 12 weeks. Even six years ago he was being described as a “Woosterish, boosterish Mayor” by a columnist who vainly hoped “voters in future general elections note Johnson’s naked careerism and adjust their votes accordingly”.

Boris tried to be stern in his first coronavirus TV appearance saying, “I must level with you, many more families are going to lose loved ones before their time.” He was then resisting closing activities down and was acting on the advice of top science and health advisers, though these experts were widely divided on the advice they were giving.

While this would mean more elderly people would die he said, it would be useful for the young to catch the virus and develop immunity – even though there is as yet no scientific evidence that a person becomes immune after being ill once. That contrasted sharply with tougher lines, shutting down cities, being taken in other countries such as the US and France and the devastating deaths in Italy.

The line changed daily to the current position of everyone, not just people over 70, staying indoors to avoid dying. Spreading immunity is now billed as a plus but not a primary aim. The aim however is still to curb the spread of the disease so that the National Health Service is not overwhelmed with patients. That led in the past week to gradual closing of schools, restaurants and clubs, but masses of people failed over the weekend to follow the advice and went in large numbers to parks and other venues.

To be charitable, Boris is seen as a supporter of individual freedoms rather than the heavy hand of government, so it does not come naturally to him to force people to stay in their homes, for schools and shops to be forced to close, and transport to be shut down, as is happening.

Also read: There’s No Hard Data This Drug Treats COVID-19. Can Doctors Give It Anyway?

Boris sees himself as a new Winston Churchill, Britain’s controversial wartime leader, about whom he wrote a biography. He has the right bulky build, bulky bordering on plump, with conveniently stooping shoulders, and the old warhorse’s absolute certainty that whatever he wants he gets and that he is right in whatever he thinks. With Boris, it also matters not a jot whether he is telling the truth or not.

Since childhood Boris has wanted to be prime minister. He made no secret of that when he moved from Eton to Oxford, where he became president of the Union. He lost his nerve and withdrew from running for the prime ministership in 2015, but succeeded last year on the back of Brexit that he had helped to engineer with a wildly dishonest referendum campaign.

This has given him his chance to fulfil his ambition to carve a spot in history as Britain’s greatest prime minister since Churchill, rather like Narendra Modi wants to grab that post-Nehru accolade. The difference though is that Modi wants to displace Nehru whereas Boris will probably be happy to be ranked alongside Churchill, emulating the towering figure.

Coronavirus, however, is not the sort of crisis that Boris wanted for his Churchillian dream. He saw himself leading Britain completely out of EU and facing down Brussels and European countries in a series of trade negotiations. With his highly adversarial top adviser, Dominic Cummings, he was looking forward to confronting new targets, ousting dissident senior bureaucrats, and showing what a couple of tough inspired negotiators and bureaucracy reformers he and Cummings are.

The enemy how however is not the European president or French prime minister that he can confront, nor Jeremy Corbyn the (outgoing) Labour Party leader that he can mock, or other parliamentary adversaries that he can goad.

Instead it is a deadly virus that he cannot tease or bully, that creeps up undetectable till it strikes at individuals, groups of people, cities and even nations. He cannot sack it as he effectively did recently with Sajid Javid, the chancellor of the exchequer (finance minister), or ignore as he does with his predecessor Theresa May, or bypass it as he does with ministers by planting Cummings-chosen advisers in their offices.

He can of course evade responsibility to a degree by taking experts with him to what have become daily press conferences, passing difficult questions to his chief medical officer Chris Whitty and chief scientific adviser Sir Patrick Vallance, or sometimes to Rishi Sunak, the new chancellor of the exchequer.

Boris has been credited with a brilliant mind since childhood, but he has never been able to master or focus on detail. Once, in a debate at the Oxford Union, he forgot mid-speech what the motion was and which side he was supposed to be on. He rarely puts together a coherent flowing sentence unless he is reading from a script.

This is the populist figure that the British electorate chose last year to be their prime minister because of exasperation with other politicians and the Brexit debate. It was widely recognised that he had scant regard for the truth, but that was dismissed because of a widely voiced view that “all politicians lie”.

Lying and buffoonery is not however what the nation expects and needs with the coronavirus. Boris, 55, has been smartened up in the past year by his 32-year-old fiancé, Carrie Symonds, the Conservative Party’s former publicity head, and by Cummings. They presented him as a viable prime minister during the general election and the run up to Brexit.

The question now is whether he can continue his charmed life and become the focused serious decision maker and national leader that Britain needs, rising to the challenge as his hero Winston Churchill did 80 years ago.

John Elliott is a journalist and author of the book IMPLOSION: India’s Tryst With Reality. He writes the blog Riding the Elephant.