Tuesday's victory is only the first hurdle for lawmakers, enabling them to take control of parliamentary business.

London: British lawmakers defeated Boris Johnson in parliament on Tuesday in a bid to prevent him taking Britain out of the EU without a divorce agreement, prompting the prime minister to announce that he would immediately push for a snap election.

The government was defeated by 328 to 301 on a motion put forward by opposition parties and rebel lawmakers in Johnson’s party – who had been warned they would be kicked out of the Conservative Party if they defied the government.

More than three years after the United Kingdom voted in a referendum to leave the European Union, the defeat leaves the course of Brexit unresolved, with possible outcomes still ranging from a turbulent ‘no-deal’ exit to abandoning the whole endeavour.

Tuesday’s victory is only the first hurdle for lawmakers, enabling them to take control of parliamentary business. 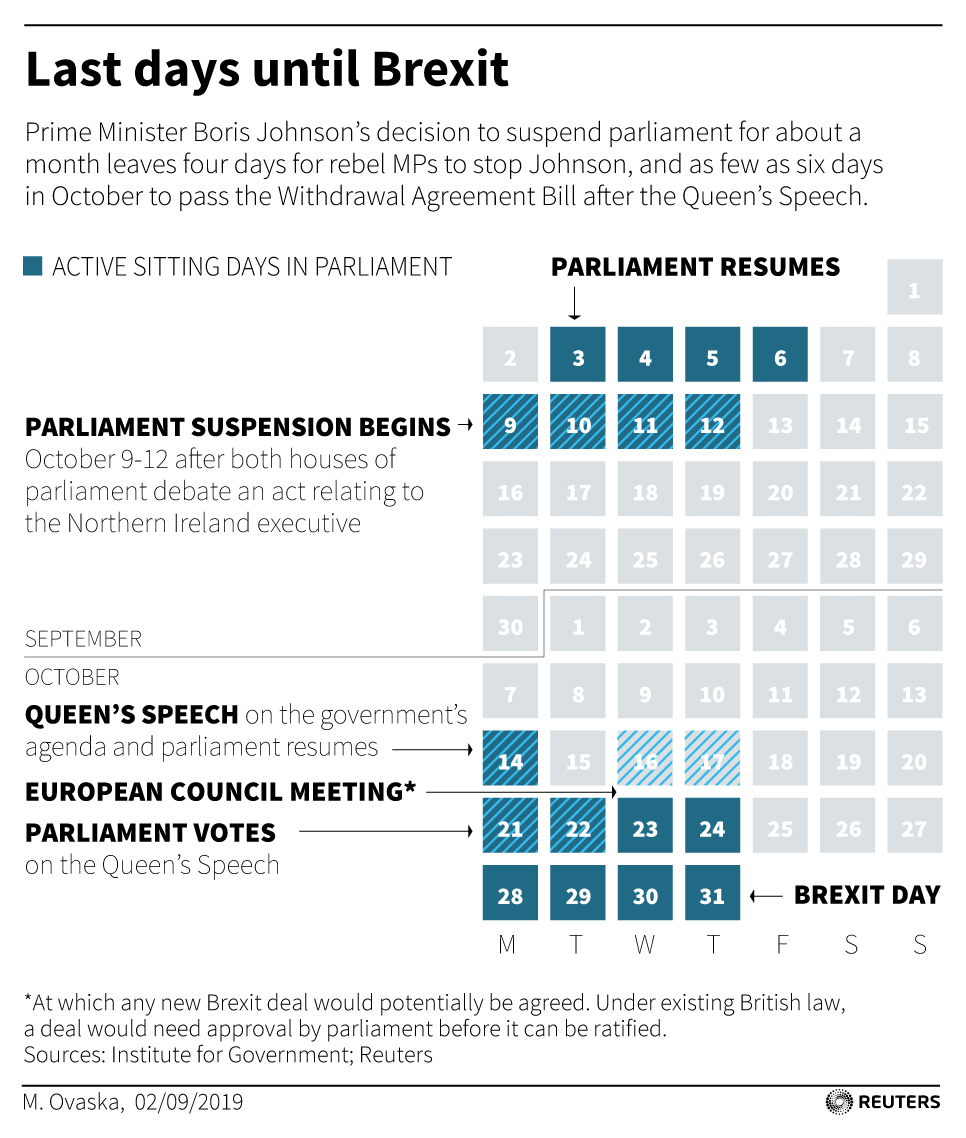 On Wednesday they will seek to pass a law forcing Johnson to ask the EU to delay Brexit – for a third time – until January 31 unless he has a deal approved by parliament beforehand on the terms and manner of the exit.

It puts Johnson in a similar bind to that faced by his predecessor Theresa May, who failed three times to get the backing of lawmakers for the Withdrawal Agreement that she had negotiated with the EU. Johnson took over from her six weeks ago with a promise that his more robust approach would force a better deal out of the EU that would satisfy parliament.

“I don’t want an election, but if MPs vote tomorrow to stop negotiations and compel another pointless delay to Brexit, potentially for years, then that would be the only way to resolve this,” Johnson told parliament after the vote.

“I can confirm that we are tonight tabling a motion under the Fixed Term Parliament Act.”

In a historic showdown between prime minister and parliament, Johnson’s opponents said they wanted to prevent him playing Russian roulette with a country once touted as a confident pillar of Western economic and political stability. 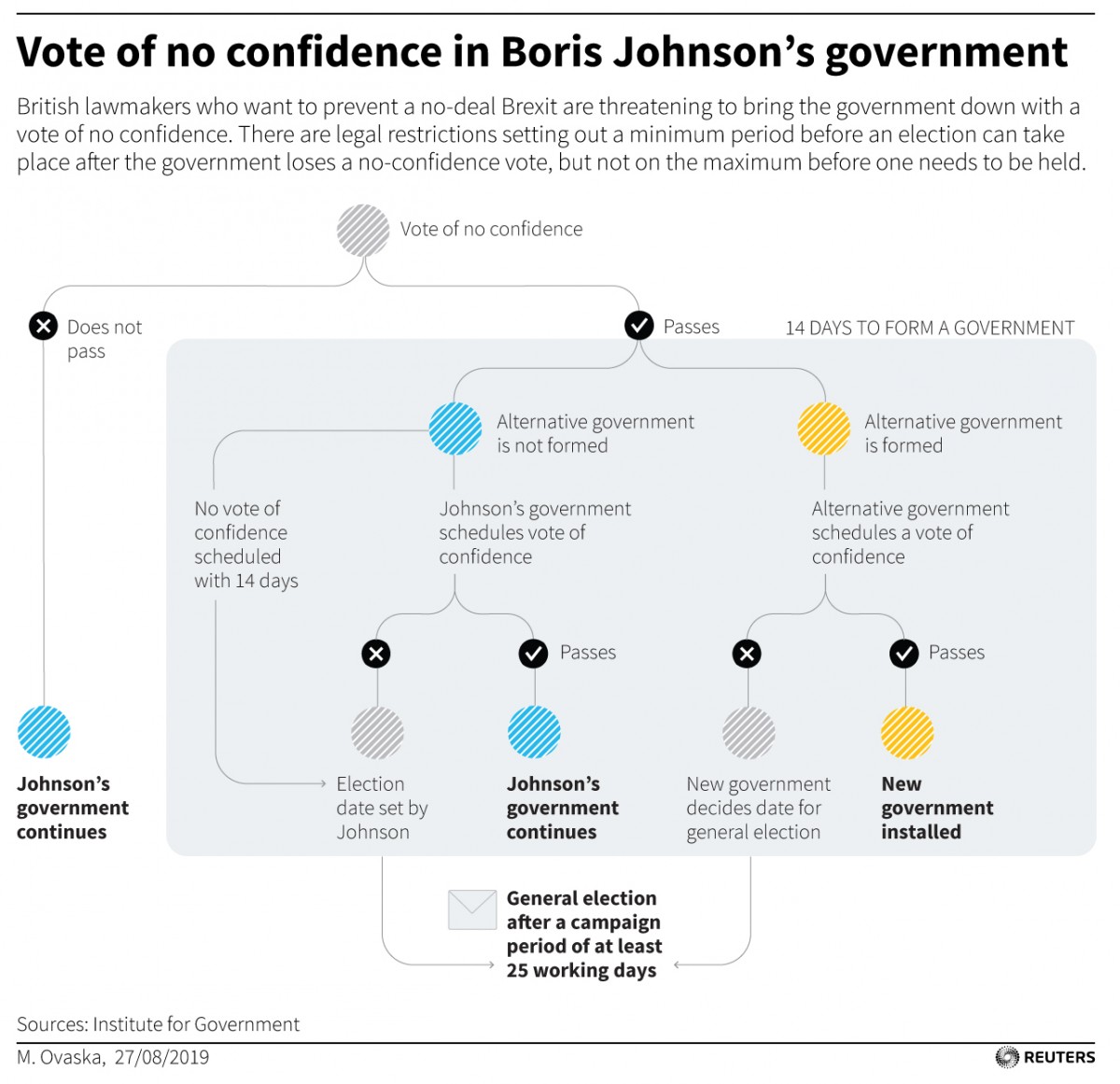 They argue that nothing can justify the risk of a ‘no-deal’ Brexit that would cut economic ties overnight with Britain’s biggest export market and inevitably bring huge economic dislocation.

Johnson cast the challenge as an attempt to force Britain to surrender to the EU just as he hopes to secure concessions on the terms of the divorce, helped by the threat to walk out without one. Ahead of the vote, he said would never accept another delay to Brexit beyond October 31.

“Parliament is on the brink of wrecking any deal we might be able to strike in Brussels,” Johnson said. “Because tomorrow’s bill would hand control of the negotiations to the EU.”

Johnson’s government will now seek to hold a vote on Wednesday to approve an early election, most likely on October 14. This would pit the avowed Brexiteer against Labour leader Jeremy Corbyn, a veteran socialist.

In the Brexit maelstrom, though, it was unclear whether opposition parties would support such a move – which requires the support of two-thirds of the 650-seat House of Commons.

Also read: How EU Families in Britain Are Coping With Brexit Uncertainty

Corbyn has long demanded an election as the best way out of the crisis, but many of those seeking to prevent a ‘no-deal’ Brexit say Johnson could time the poll to ensure that parliament cannot prevent an Oct. 31 departure – with or without a deal.

After the vote, Corbyn told Johnson that he must get the Brexit delay bill that will be discussed on Wednesday passed before trying to call an election.

The 2016 Brexit referendum showed a UK divided about much more than the EU, and has fuelled soul-searching about everything from secession and immigration to capitalism, empire and modern Britishness.

It has also triggered civil war inside both of Britain’s main political parties as dozens of lawmakers put what they see as the United Kingdom’s fate above that of party loyalty.

Just as Johnson began speaking, he lost his working majority in parliament when one of his own Conservative lawmakers, Phillip Lee, crossed the floor of the House of Commons to join the pro-EU Liberal Democrats.

The pound, which has gyrated to the twists and turns of Brexit since the 2016 referendum and is highly sensitive to the prospect of a ‘no-deal’ exit, had briefly dipped as low as $1.1959 before the vote in parliament. Barring a minutes-long “flash crash” in October 2016, sterling has not regularly traded at such low levels since 1985.

Fears of a ‘no-deal’ Brexit were rising elsewhere. 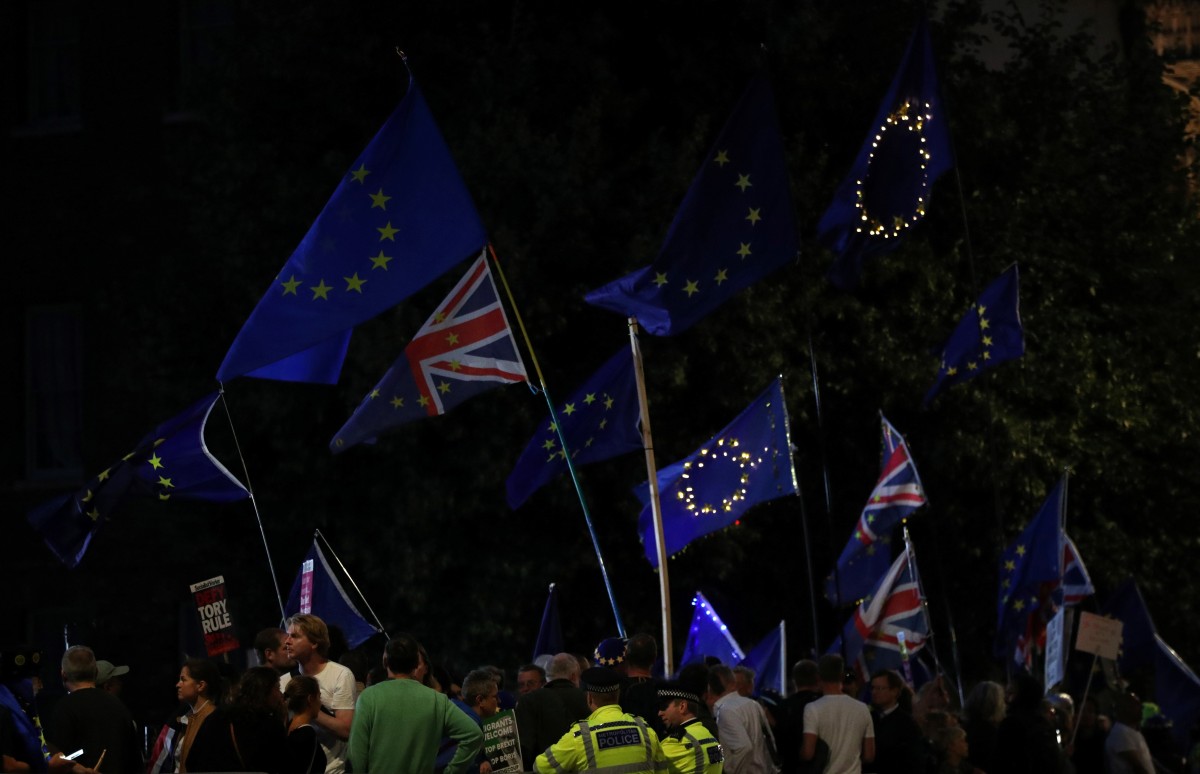 The European Commission said such a scenario was a “very distinct possibility” and French foreign minister Jean-Yves Le Drian said it was the most likely scenario.

In a document seen by Reuters, the European Commission set out proposals to be published on Wednesday to provide financial help for EU businesses, workers and farmers if Britain crashes out of the bloc without any agreement.

It restated its view that a ‘no-deal’ divorce would hit the British economy much harder than that of the EU.

The UN trade agency UNCTAD said it would cost Britain at least $16 billion in lost exports to the EU, plus a further substantial sum in indirect costs.

The US investment bank JPMorgan said an election would make a no-deal Brexit more likely.