Biden or Trump? Results of These States Are Key to Choosing the Next US President

The ten states – with 179 electoral votes among them – that could unlock the fate of the “most consequential election in a lifetime”.

New Delhi: While voters queue up in the United States, the next president will be elected through a circuitous route to the White House – with the spotlight squarely focused on the outcome of ten states.

The popular vote will determine whether all the electoral seats allocated to a particular states will be bagged by a candidate. Out of the 538 seats in the electoral college, the winner has to cross the threshold of 270.

In 2016, Donald Trump had lost the popular vote, but swept the electoral college as he won a larger number of states with smaller victory margins.

A crucial part of American poll punditry is to find out the path to the presidency by identifying the states which could ‘swing’ the election. Most of the states are termed comfortably ‘Blue’ or ‘Red’ based on their voting trends and demographics, but then are always a dozen or so states where the results could be competitive.

“So how do we define those battleground states? We can look at polling from state to state and look at those contests that are within the margin of error. So if a state has, 600 respondents and the margin of error is plus, or minus 4%, we could say, ‘Well, if they’re within that margin on either side, if they’re within say six points and the margin either way, sort of helps them overlap’. We can say that’s a toss-up state,” said vice president of the Republican Polling and Strategy Firm in North Star Opinion Research, Jon McHenry.

Ahead of voting day, it was clear that the “battleground is extending toward Democrats when it comes to the presidential battleground,” pointed out Margie Omero, Principal at Democratic Polling Firm, GBAO. The top ‘swing states’ in play in this election had all been won by Trump four years ago.

She said that had the mood been more favourable towards Trump, “you would see Virginia, Colorado, Minnesota, New Mexico perhaps, be more battleground states than there are”.

Based on the consensus among US pollsters, here are ten states – with 179 electoral votes among them – that could be the key to unlocking the fate of the “most consequential election in a lifetime”.

While the ‘Keystone’ state voted blue for over 60 years, the streak was broken by Trump in 2016. Even in the last days of the campaign, both Trump and Democratic presidential candidate Joe Biden were making multiple stops in the state, showing that they consider Pennsylvania to be the “tipping state”. According to analysts, it is the most visited among the battleground states, and had the lowest rate of early voting – which means that there were a lot of voters left in the field for the two candidates to woo.

Polling average: Biden ahead by 3.7% 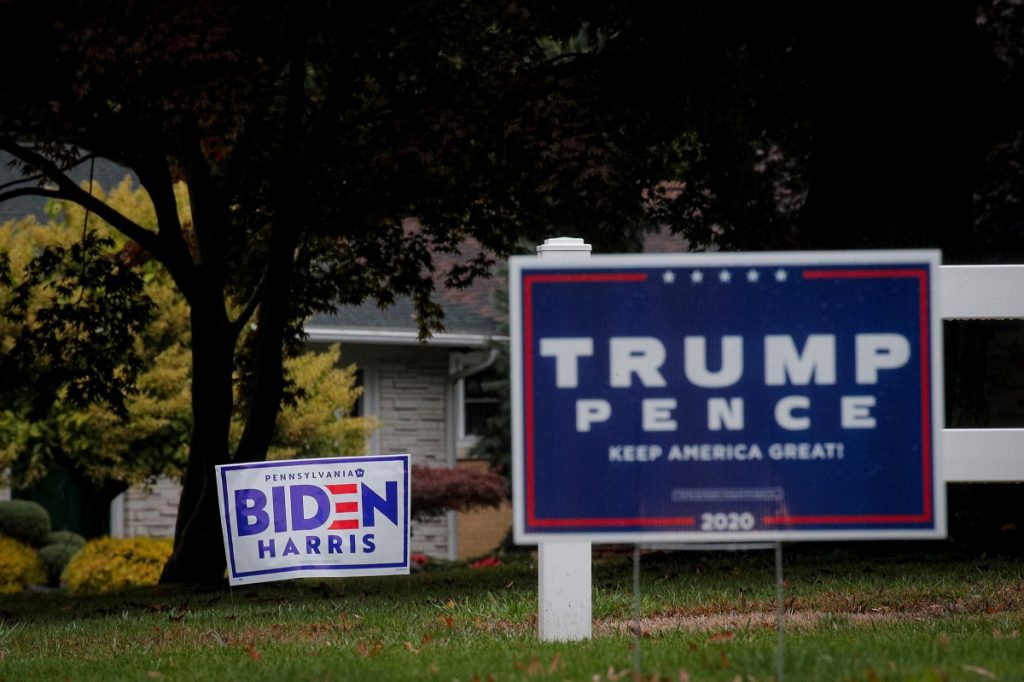 Campaign signs for US President Donald Trump and Democratic US presidential nominee Joe Biden are seen near an event at Erie International Airport in Erie, Pennsylvania, October 20, 2020. Photo: Reuters/Brendan McDermid

Wisconsin has always been known as a swing state due to its close winning margins of less than 1%. The only time that there was a decisive vote was in the two elections fought by Barack Obama in 2008 and 2012.

According to FiveThirtyEight, three factors would be decisive in Wisconsin – white voters without college degrees, Republican-leaning suburbans and turnout among black men.

Polling average: Biden ahead by 9.2%

Also read: Explainer: What Is the US Electoral College and How Does It Work?

The lone-star state has the second largest pool of electoral votes in US after California. No Democratic presidential candidate has won in Texas since 1976, but there has been  a surge of interest as most polls have shown that the race is very close this time. Early voting has surpassed the turnout in 2016, which is usually predicted to favour the Democrats. Republicans had launched a legal challenge to cast aside voting in drive-through locations in a Texas county, which was rejected by a federal judge on Monday.

The pandemic-hit economy and rising unemployment, along with a diverse voter base, has led to Texas being termed as one of the ‘swing states’.

Polling average: Trump ahead by 1.3%

While Democrats have not won this state in presidential elections for 24 years, it has become less red over the years. According to AZ central, bigger turnouts among the Democratic leaning-Hispanic population and a large independent electorate has made the state swing blue over the last two years.

Polling average: Biden ahead by 2.2%

This state has always voted for the eventual winner in the last six presidential elections. While Trump won the state in 2016, there was a strong blue wave in the 2018 mid-term elections. If Biden manages to turn his polling lead into a win, it will be largely due to backing from older and Hispanic voters. With an early poll closing time, the results from Florida will be the earliest among the battleground states.

Polling average: Biden ahead by 3.1% 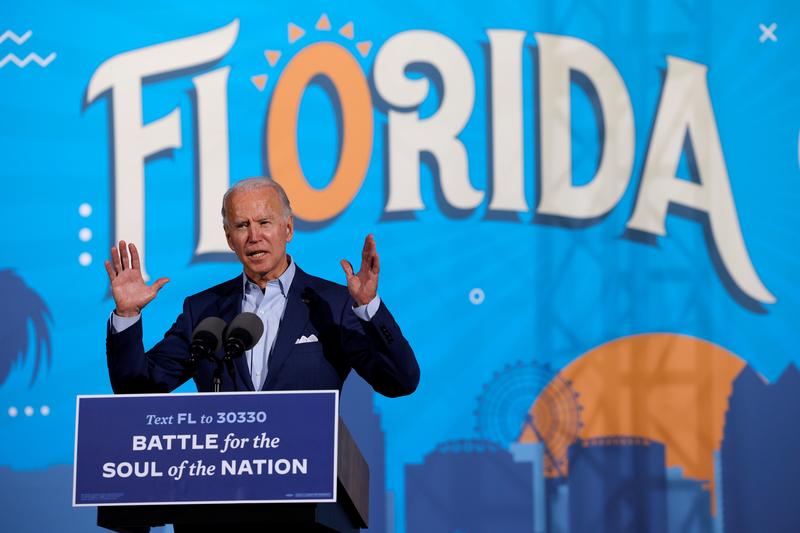 Democratic US presidential nominee Joe Biden speaks at a Get Out the Vote campaign stop in Tampa, Florida, October 29, 2020. Photo: Reuters/Brian Snyder

The high early voting turnout raised hopes in the Republican stronghold. While Trump won the State by over 5% in 2016, he is tied in most state polls with Biden. The population has grown and become more diverse in the last one decade, with the New York Times asserting that its politics is being defined by young voters, anti-Trump suburban women and minorities.

Polling average: Biden ahead by 0.2%

A classic swing state, Iowa has voted for the Democratic presidential candidate six times and the Republican hopeful four times in the last ten elections. Iowa has both a large number of white working class – who favour Trump, and a high number of college educated population who have usually leaned Democratic. Trump’s winning margin in 2016 had been a shock for most Democrats, but they have won lost political ground in the last two years.

Polling average: Trump ahead by 1.6%

Trump’s winning margin in Michigan had been the narrowest in the country, by less than 11,000 votes. Democrat votes are concentrated in the urban population centres in the state’s southeast, while Republican voters have been generally blue collar, non-college educated. With the sliver-thin majority in 2016, Trump was already facing a tough re-election battle in Michigan, which has been compounded by the mishandling of the Covid-19 pandemic, said Jonathan Hanson, a lecturer at University of Michigan’s Ford School of Public Policy.

Polling average: Biden ahead by 5.4% 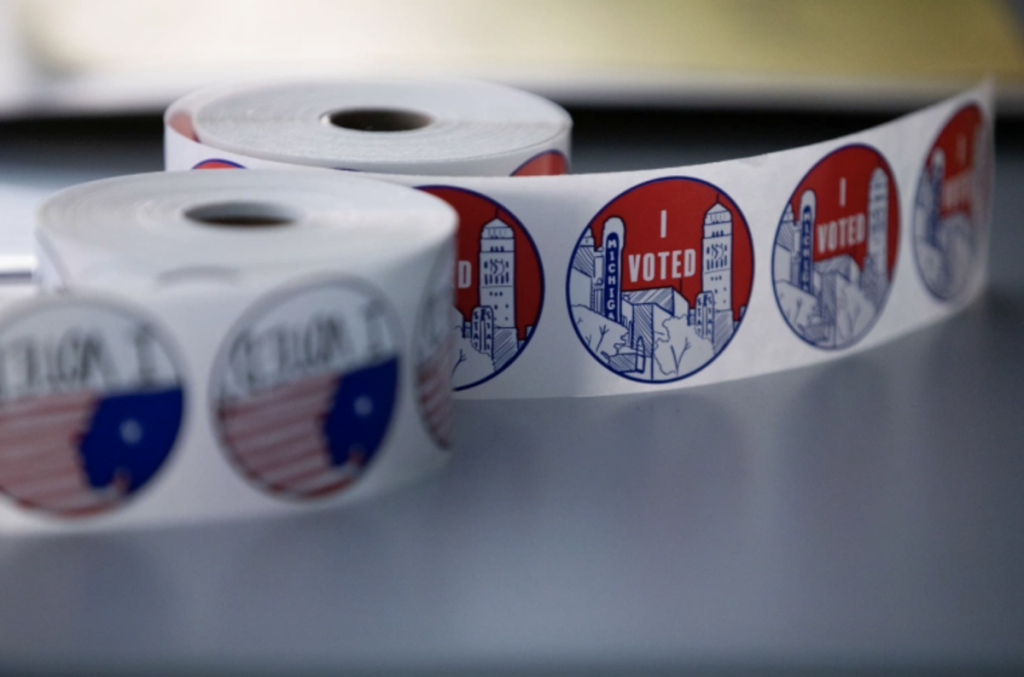 ‘I Voted’ stickers for people who cast their ballots for the upcoming presidential elections are seen as early voting begins in Ann Arbor, Michigan, on September 24, 2020. Photo: Emily Elconin/Reuters

In yet another southern state, the changing demographic has given hope to the Democrats, along with high early voting. This state has voted for Democrats only twice – in 2008 and 1976. Along with Florida, North Carolina is a state that Trump has to win in order to return to the White House. “Biden-Harris can win the election without North Carolina, I don’t think Trump can,” said a political science professor at University of North Carolina in Greensboro.

Polling average: Biden ahead by 0.3%

Ohio is yet another too close to call state, with Trump and Biden locked in a tie in most polls ahead of voting. This is a surprising development given that Trump had carried the state comfortably in 2016. While Trump has to maintain his base in rural areas and the industrial belt, Democrats are looking for a higher turnout among black and urban voters. According to a Republican pollster, Ohio “dictates where the Midwest ends up”.

Polling average: Trump ahead by 0.9%