Tsikhanouski was arrested last year after he galvanized an unprecedented popular movement against Lukashenko. 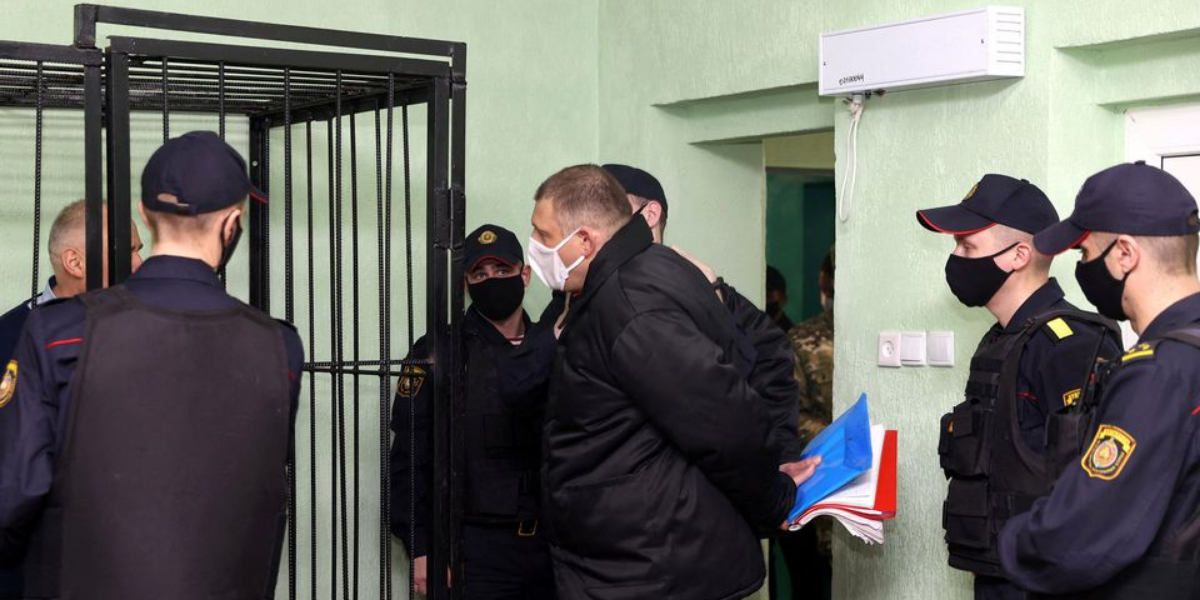 Tsikhanouski’s wife Sviatlana Tsikhanouskaya, who was a political novice at the time of his arrest, replaced him as an election candidate and claims to be the rightful winner of the vote.

She denounced the verdict. “The dictator publicly takes revenge on his strongest opponents,” she tweeted, immediately after the sentence was announced.

My husband, Siarhei Tsikhanouski, is sentenced to 18 years in prison. The dictator publicly takes revenge on his strongest opponents. While hiding the political prisoners in closed trials, he hopes to continue repressions in silence. But the whole world watches. We won't stop. ✊ pic.twitter.com/hdnHj8y6HZ

“While hiding the political prisoners in closed trials, he hopes to continue repressions in silence. But the whole world watches. We won’t stop,” she added in English.

The 43-year-old has been in custody since May 2020. He was found guilty of organizing mass unrest and inciting social hatred.

Tsikhanouski had planned to run against Lukashenko in the August 2020 presidential elections in Belarus. However, he was arrested before the vote and jailed.

While campaigning, Tsikhanouski coined a new insult for Lukashenko when he called him a “cockroach.” The campaign slogan became “Stop the cockroach,” and supporters waved slippers – sometimes used to kill the insects – at protests.

Soon after announcing his presidential bid, the activist was detained and charged with violating public order.

Pavel Latushko, a former Belarusian culture minister who went into exile after speaking out against members of Lukashenko’s government told DW that the sentence is “not a surprise for me personally and it is not a surprise for Belarusians. This is a clear example that the regime has no limits today.”

“The regime is organizing torture and (plane) hijacking. (Lukashenko) is organizing the trafficking of people, hybrid wars, and mass human rights violations,” he added, so it is no great leap to jail opponents.

Several other opponents of Lukashenko were also sentenced by the court. One of Tsikhanouski’s five co-defendants in the high-profile case, veteran politician Mikola Statkevich, was sentenced to 14 years. The now 65-year-old challenged Lukashenko in elections in 2010 but was sentenced to 6 years in prison. Released early in 2015, he was barred from being a candidate in the 2020 poll.

Another defendant in the case was Ihar Losik. The 29-year-old was sentenced to 15 years. He was detained in the summer of 2020 and accused of using the messenger app Telegram to incite riots through his popular channel.

The three other co-defendants were the blogger Uladzimir Tsyhanovich as well as two activists linked to Tsikhanouski – Artsiom Sakau and Dzmitry Papou. Tsyhanovich was handed a 15-year term, while Sakau and Papou were jailed for 16 years apiece.

Siarhei Tsikhanouski was sentenced to 18 years in prison, Artsiom Sakau & Dzmitry Papou to 16, Ihar Losik & Uladzimir Tsyhanovich to 15, Mikalai Statkevich to 14. The very existence of these people is a crime for the regime. They're repressed for the wish to live in free Belarus. pic.twitter.com/UuL9Fx2IAe

German foreign minister Annalena Baerbock condemned “the scandalous verdicts,” adding that they “disgrace the rule of law and international obligations of Belarus.”

US Secretary of State Antony Blinken demanded an end to the “harsh repression” in Belarus following Tuesday’s sentences.

“Neither these individuals, nor the Belarusian people, warrant such harsh repression,” Blinken said in a statement.

We condemn today’s politically motivated convictions of Belarusian opposition figures Syarhey Tsikhanouski, Mikalai Statkevich, and journalist Ihar Losik. We call for their immediate, unconditional release and that of all 900+ political prisoners held by the Lukashenka regime.

Vows to keep up fight

Ahead of the sentence, Sviatlana Tsikhanouskaya had said any verdict would be “illegal and not something with which one can make peace.”

“I will keep defending the person I love and who became the leader of millions of Belarusians,” Tsikhanouskaya said in a video address.

“I will try to do something very difficult – maybe impossible – to bring closer the moment when we will see each other in a new Belarus,” she said.

Tsikhanouskaya, who had been a stay-at-home mother of two children at the time of her husband’s arrest, was forced to flee ex-Soviet Belarus after her electoral bid, to neighboring Lithuania.

Doubts about the election result saw unprecedented mass protests in Belarus, the largest of which saw some 200,000 people taking to the streets of the capital, Minsk. Lukashenko’s regime responded with a violent crackdown on the demonstrators, with more than 30,000 people arrested and thousands brutally beaten.

Lukashenko’s government has jailed or forced into exile all of his prominent opponents and Belarusian courts have been repeatedly criticized for issuing politically motivated sentences.

One hearing sentenced in September sentenced dissident Maria Kolesnikova to 11 years in prison for violating national security and conspiring to seize power.

In July, another opposition leader and former banker, Viktor Babariko, was given a 14-year prison sentence on fraud charges.