Influential cleric Moqtada al-Sadr and Iran backed Nuri-al-Maliki are locked in a tussle to gain enough power before the upcoming elections. 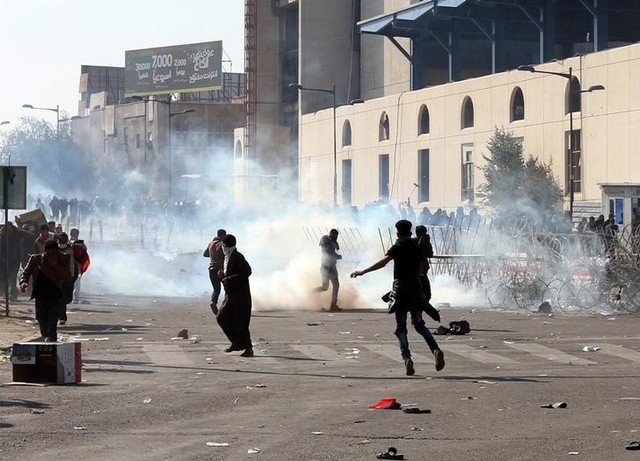 Baghdad: Bloody protests in Baghdad over the weekend by followers of influential cleric Moqtada al-Sadr signal the resumption of a power struggle between Iraq’s Shi’ite leaders which had been put on hold to focus on the war against ISIS.

With Iraqi forces all but certain to defeat ISIS in Mosul this year, Sadr has begun mobilising his supporters ahead of two elections, for provincial councils in September and the crucial parliamentary vote, by April 2018.

His main rival is former Prime Minister Nuri al-Maliki, a pro-Iranian politician who started positioning himself last year as a possible kingmaker or even for a return to the premiership itself.

The political tussle played out on the streets of central Baghdad on Saturday when five demonstrators and a policeman were killed in clashes between security forces and Sadr followers demanding an overhaul of the state election commission, which the cleric believes favours Maliki.

A return to power for Maliki would bolster Iranian influence in Baghdad, giving Tehran leverage in any conflict with US President Donald Trump’s administration, which put new sanctions on the Islamic republic following its missile test last month.

Although Sadr is openly hostile to Washington’s policies in the Middle East and has spent considerable time in Iran, he would be a less dependable ally for Tehran in Baghdad. He has a troubled relationship with Iraqi political groups allied with Iran, and portrays himself as an Iraqi nationalist.

Maliki’s eight-year rule ended in 2014, when the Iraqi army collapsed in the face of an ISIS offensive, forcing him to hand over power to current Prime Minister Haider al-Abadi. Both men are members of the Shi’ite Dawa party.

He now holds the ceremonial position of vice president but still wields considerable influence, chairing the Dawa party which controls the largest bloc in parliament.

Abadi, a moderate Shi’ite politician, was better able to work with the Americans who helped rebuild the army and provided critical air and ground support to troops battling the Sunni jihadists after they seized a third of Iraq in 2014.

Iraqi forces have completed the first phase of the campaign to retake Mosul, the biggest city under ISIS control, removing the militants from the eastern side of the city.

Abadi has overseen the two-year fightback, but lacks a political power base to match Sadr or Maliki.

“Abadi came as a compromise between the Americans and the Iranians,” said Wathiq al-Hashimi, chairman of the Baghdad-based Iraqi Group for Strategic Studies think tank.

“Given the escalation with the Trump administration, Iran would for sure seek to have a strong, loyal ally in Baghdad” to take over after the parliamentary elections next year, he said.

The new US president says he has put Iran “on notice” after it test-fired a medium-range ballistic missile in January.

Some Western powers say that any launch of nuclear-capable ballistic missiles would violate a UN Security Council resolution which enshrined a deal which curbed Iran’s nuclear programme in return for an easing of international sanctions. Iran says its missile launches do not breach the deal.

The escalation, and the Trump administration’s halt to immigrants from seven mainly Muslim nations, placed Abadi in a dilemma. He resisted calls from influential pro-Iranian Shi’ite politicians to retaliate against the ban, citing Iraq’s need for US military support.

Commenting on his phone call on Thursday with Trump, he said Baghdad will steer clear of US-Iran tension.

Fourteen years after the US-led invasion that toppled Saddam Hussein, the country still suffers a shortage of electricity, water, schools and hospitals, while existing facilities and infrastructure suffer widespread neglect.

Street mobilisation is important for Sadr as he cannot rely on a regional backer to sustain his popularity.

Reacting to the killing of his followers on Saturday evening, Sadr said he was suspending protests for the time being, but added: “Their blood won’t have been shed in vain.”

Hashimi said Saturday’s violence was unlikely to herald a dramatic shift in the balance of power, but the protesters had taken notice that Sadr cannot be ignored. The protests enabled him “to mobilise his base under patriotic slogans and reassert his leadership,” he said.

Sadr is the heir to a clerical dynasty which suffered under Saddam Hussein. While the Sadr family remained in Iraq, his main Shi’ite rivals, including Maliki, fled Saddam’s persecution and returned to Iraq only after the invasion.

Iran has trained and armed Shi’ite militias collectively known as Popular Mobilisation forces to counter ISIS. Most of their leaders have close links with Maliki.

Maliki’s Dawa party accuses Sadr of obstructing the war on ISIS, saying his street protests increase the burden on the armed forces at the time when they are about to dislodge the militants from Mosul, their last city stronghold in Iraq.

A lawmaker close to Maliki, Ahmed al-Badri, also accuses the Sadrists of “being part of the corruption problem”.

“The elections are around the corner and everybody wants to win the street, and everybody, including the Sadrists, are part of the corruption problem through their participation in different governments,” he told Reuters.

Sadr’s followers reject the accusations of obstructing the war effort. “It’s their corruption that facilitates the entry of Daesh,” said Ali Abu Mahdi, a 42 year-old state employee who marched in Saturday’s demonstration. “Both are in the same bag.”