Azerbaijan and Armenia Agree to a Ceasefire

After nearly two weeks of clashes in Nagorno-Karabakh, Armenia and Azerbaijan have agreed to suspend hostilities. Russia's top diplomat Sergey Lavrov said that the cease-fire is set to go into effect later on Saturday. 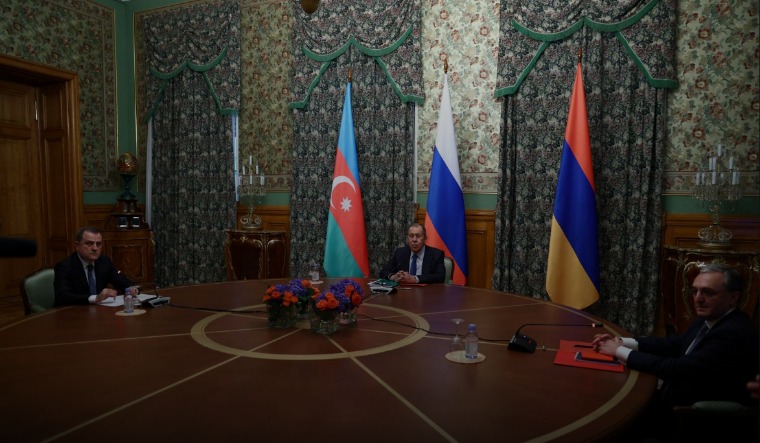 Armenia and Azerbaijan said that they have agreed to a cease-fire in Nagorno-Karabakh starting at noon Saturday, following 10 hours of talks between diplomats from the two countries in Moscow hosted by Russian Foreign Minister Sergey Lavrov.

Since September 27, more than 400 people have been killed in fighting over the contested region. Nagorno-Karabakh is officially part of Azerbaijan, but under control of ethnic Armenian forces backed by Armenia since the end of a separatist war in 1994.

Armenian Foreign Minister Zohrab Mnatsakanyan and his Azerbaijani counterpart, Jeyhun Bayramov, agreed to a cease-fire”on humanitarian grounds for exchanging POWs and other detained persons and dead bodies,” according to a statement read out by Lavrov.

The cease-fire deal puts a hold on a conflict that has threatened to spin out of control, potentially pitting Turkey, a close ally of Azerbaijan, against Russia, which has a defense pact with Armenia.

The EU, Russia and the United States have all called for the fighting to stop, and for peace talks to be mediated by the so-called Minsk Group, which is co-chaired by France, Russia and the US.

The group was created in 1992 by Organization for Security and Co-operation in Europe (OSCE) to encourage a peaceful, negotiated resolution to the conflict over Nagorno-Karabakh amid a full-blown war that killed at least 30,000 people and ended without a peace treaty in 1994.

Saturday’s statement indicated that negotiations moving forward would be mediated by the Minsk Group.

As the talks got underway Friday, Azerbaijani President Ilham Aliyev gave a defiant address on domestic television, saying that the nearly three decades of international talks had not “yielded an inch of progress” and that Azerbaijan had not “been given back an inch of the occupied lands.”

“Mediators and leaders of some international organisations have stated that there is no military solution to the conflict,” Aliyev said.

“I have disagreed with the thesis, and I have been right. The conflict is now being settled by military means and political means will come next.”