It is the third such attack on the Montreal-based company, which runs two mines in the West African country, in the past 15 months. 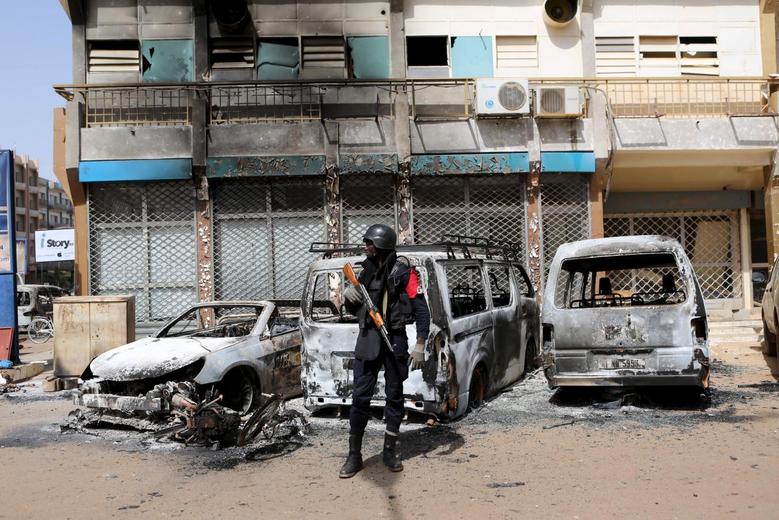 A soldier stands guard in front of burned cars across the street from Splendid Hotel in Ouagadougou, Burkina Faso, January 17, 2016. Photo: Reuters

Gunmen ambushed five buses carrying workers for a Canadian gold mining company in Burkina Faso. It is the deadliest attack in five years of near-constant extremist violence in the country.

At least 37 civilians are dead and more than 60 are wounded after gunmen attacked a convoy of local employees working for the Canadian gold mining company Semafo in Burkina Faso on Wednesday.

Five buses and a military escort were ambushed approximately 40 kilometers (25 miles) from a gold mine in Boungou in the eastern part of the country.

The convoy suffered “several fatalities and injuries”, the company said in a statement, adding that operations at the mine were not affected. The death toll, which thus far does not include security personnel, is expected to mount. It is already the deadliest attack in nearly five years of violence in the country.

It is the third such attack on the Montreal-based company, which runs two mines in the West African country, in the past 15 months. Vehicles on their way to the mines were victims of a similar deadly attack in August last year, while a police vehicle was targeted on the same road in December.

Jihadist violence has plagued Burkina Faso in recent years. The northern part of the country has served as a haven for Islamist extremists who cross the border from Mali. More than 630 people in the country have died in regular attacks that include raids on villages, road mines and suicide bombings. Past instances of violence have been claimed by various militant groups, like al-Qaeda and the “Islamic State.”

Until the Wednesday ambush, the country’s deadliest attack had occurred at a hotel in the capital Ouagadougou in January 2016. Jihadists killed 30 people, about half of them foreign nationals.

The country is among the world’s poorest nations, with poorly equipped security forces and a fragile political system that have been unable to rein in the violence.