According to a new research report by the Transnational Institute, firms that provide Europe with security infrastructure to deal with the refugee influx are among the biggest arms sellers to the areas of conflict that have the largest outflow of migrants. 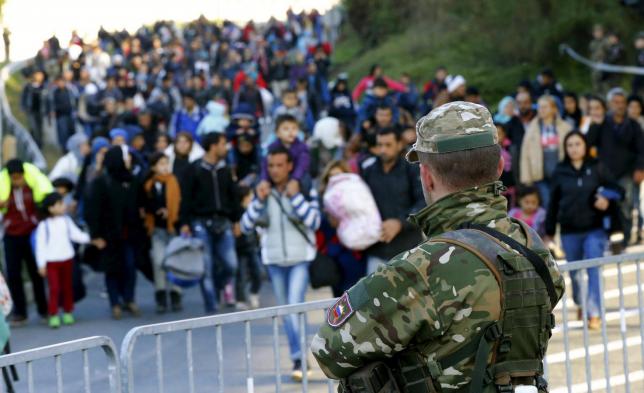 A member of the Sowenian army observes migrants walking towards the Austrian border near the village of Sentilj, Slovenia, October 24, 2015. Credit: Reuters A Macedonian police officer gestures towards a refugee who is preparing to cross the Greek-Macedonian border near the village of Idomeni, Greece December 4, 2015. Credit: Reuters

Since 2015, millions of people have made their way to Europe to seek asylum, primarily escaping wars and violence in West Asia and North Africa. Asylum seekers have moved from countries torn apart by civil war, militant and terrorist activities, and weak economies. The UN High Commissioner for Refugees’ recent Global Trends report says fighting in Syria, Afghanistan, Burundi and South Sudan have forced people to flee, mainly to Lebanon, Jordan and Turkey, and onwards to Europe, putting the refugee numbers at 21.3 million people last year.

The influx of refugees has tested the European Union, leading to much disagreement among, and within, member states on ways to tackle the crisis, including disparaging views on refugee quotas, resettlement and border controls. European countries have also adopted questionable policies to keep refugee numbers in check. Denmark, for instance, has by law allowed authorities “the power to search clothes and luggage of asylum seekers… with a view to finding assets” to cover expenses such as food and accommodation. Many countries are turning increasingly hostile toward taking in more refugees, and far-right groups have taken to the streets against the arrival of asylum seekers and are blaming this influx for an economic recession in the region. As a result, numerous refugees are held at the borders and detention camps, and subjected to harsh treatment, with many others still choosing to cross over land and sea routes in hopes for a safer and better life.

As European countries try to ‘secure’ their border, a new report has revealed one sector has continued to benefit from the refugee crisis – military and security companies that provide European countries with their basic security infrastructure. The soon-to-be-released report, ‘Border Wars: The Arms Dealers Profiting From Europe’s Refugee Tragedy’, authored by Mark Akkerman of Stop Wapenhandel and published by Transnational Institute, details how these companies have profited by “actively encouraging a growing securitisation of Europe’s borders, and [are] willing to provide ever more draconian technologies to do this”.

The report also discloses that among the beneficiaries of the border security contracts are some of the “biggest arms sellers to the Middle-East and North-African region,” who fuel the conflicts in that region, which is the cause for why so many people have fled. “Those companies that helped create the crisis are now profiting from ‘securing’ Europe’s borders,” says Akkerman.

The EU’s increasingly militarised response to ‘fighting illegal immigration’ has meant the border security market is now booming; it was estimated at some 15 billion euros in 2015 and is predicted to rise to over 29 billion euros annually in 2022. Arms sales to West Asia and North Africa, from where most refugees are fleeing, is also on the rise; between 2006-10 and 2011-15, global arms sales to West Asia increased by 61%.

Given that the European refugee policy focuses on targeting traffickers and boosting border security, there have been big budget increases, which have in turn helped the sector. From 2004 to 2020, the EU, through its main funding programmes, will give its member states 4.5 billion euros for border security measures. Meanwhile, between 2005 and 2016, the EU also increased the budget of Frontex, its main border control agency, by 3688%. Besides, new member states are required to strengthen borders as a condition of membership, which creates additional markets for profit. Importantly, some of the arms sold to the West-Asian and North-African region are also intended for border control. For instance, in 2015, the Dutch government granted a 34 million euro export license to Thales Nederland for the delivery of radar and C3-systems to Egypt.

According to the report, arms companies such as Airbus, Finmeccanica, Thales and Safran, and technology giant Indra, are the big players in Europe’s border security complex. Airbus, Finmeccanica and Thales are also among the top four European arms traders. All three firms actively sell arms to countries in West Asia and North Africa. Between 2005 and 2014, EU member states granted these firms (and others) arms exports licenses to West Asia and North Africa worth over 82 billion euros.

Israeli firms have also benefitted from European efforts to fortifying its borders, and have played a role in securing the Bulgarian and Hungarian borders.

Besides naming and exposing the companies profiting from the refugee crisis, the report also details the role the arms and security industry plays in shaping European border security policy through lobbying. Unsurprisingly, the arms and security industry has also successfully captured much of the 316 million euros in funding provided by the EU for research on security issues. Through regular interactions with the EU’s border institutions and through their research, these firms are able to direct border policy to better suit their interests. For instance, the European Organization for Security, members of which include Thales, Finmecannica and Airbus, has actively lobbied for increased border security.

Beyond presenting a detailed account of how arms and security firms are benefiting from the refugee crisis, the report also makes a strong case for the need to end the military-security-industrial complex in Europe, which targets some of the most vulnerable people in the world at present. Transnational Institute’s Nick Buxton says, “To really address the refugee crisis, we need to stop fueling the conflicts in the first place, and invest money spent on arms firms into providing a safe passage and a fair treatment of refugees”.