Police and business owners said they were taking precautions to protect property, with memories still fresh of sometimes violent protests over racial injustice in many cities over the summer. 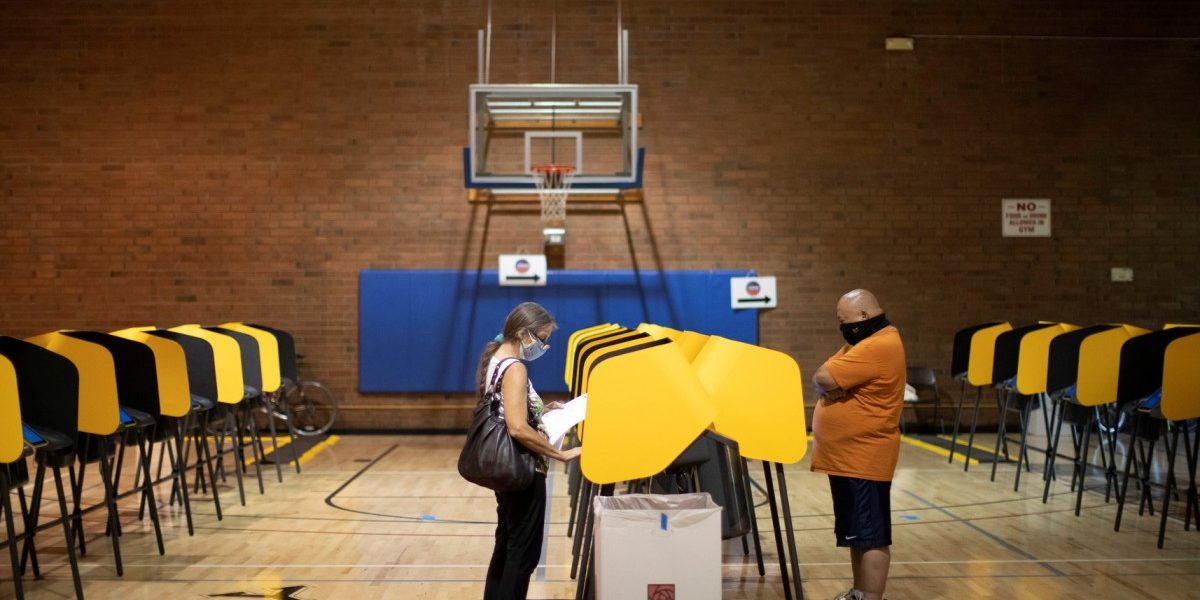 People vote during the US presidential election in the gymnasium of the Victory Park Recreation Center in Pasadena, California, US, November 2, 2020 Photo: Reuters

McConnellsburg: Millions of Americans will cast ballots on Tuesday in an Election Day unlike any other, braving the threat of COVID-19 and the potential for violence and intimidation after one of the most polarising presidential races in US history.

In and around polling places across the country, reminders of a 2020 election year shaped by pandemic, civil unrest and bruising political partisanship will greet voters, although more than 90 million ballots have been already submitted in an unprecedented wave of early voting.

Many will wear masks to the polls – either by choice or by official mandate – with the coronavirus outbreak raging in many parts of the country.

Some voters in major US cities will see businesses boarded up as a precaution against politically motivated vandalism, an extraordinary sight on Election Day in the US, where voting is typically peaceful in the modern era.

The tensions surrounding this year’s presidential election were in the air on Monday in the gun section of the Buchanan Trail Sporters store in the small town of McConnellsburg, Pennsylvania.

“No matter who gets in they have a feeling there will be some civil unrest,” Sally Hoover, the shop’s co-owner, said as half a dozen shoppers browsed the cases filled with weapons and bullets.

Hoover is supporting President Donald Trump, a Republican, as he fights for a second term against the Democratic candidate, Joe Biden, a former vice president who is ahead in the polls.

“These people around here aren’t going to go looking for the fight,” Hoover said. “But if the fight comes to them, they are going to defend their property and way of life.”

Tensions from Times Square to Texas

The American Civil Liberties Union and other civil rights groups said they were watching closely for signs of voter intimidation.

The ACLU’s Georgia affiliate deployed around 300 lawyers across the state at about 50 potential “hot spots” for voting trouble on Tuesday, including 15 polling places in Atlanta.

“We have poll observers who are looking out for any voter intimidation,” Andrea Young, ACLU Georgia’s executive director, told reporters. “We don’t know exactly what will happen, but we want to be as ready as possible.”

The US Justice Department’s Civil Rights Division is deploying staff to 18 states to monitor for voter intimidation and suppression, including in some battleground counties and in cities shaken by civil unrest this year.

Police and business owners said they were taking precautions to protect property, with memories still fresh of sometimes violent protests over racial injustice in many cities over the summer.

In New York City, the Macy’s department store and the skyscraper that houses the Trump-favored Fox News channel were among the buildings that were boarded up. On Rodeo Drive, one of the most expensive shopping streets in California’s Beverley Hills, staff stripped the display windows at Tiffany & Co. and Van Cleef & Arpels of their jewels.

“Hopefully this is all for nothing,” Kathy Gohari, vice president of the Rodeo Drive Committee, the merchants association, said on Monday as she watched workers nail plywood over luxury storefronts.

An alleged plot by an anti-government militia group to kidnap Michigan’s Democratic governor, uncovered last month, has highlighted the potential for political violence on Election Day. Police in Graham, North Carolina, doused a group of anti-racism activists with pepper spray as they were marching to a polling station on Saturday.

On a Texas highway on Friday, in a spectacle reminiscent of the movie Mad Max, a convoy of pickup trucks mounted with billowing Trump flags surrounded a Biden-emblazoned bus filled with campaign staffers in what seemed an attempt to force the bus off the road.

Trump praised the pickup drivers as “patriots,” and expressed impatience with his Federal Bureau of Investigation when the agency said it was looking into the matter.

In the New York City area and elsewhere, convoys of vehicles with Trump flags stopped on highways and bridges, according to local media, snarling traffic in a defiant show of support for the president.

Even once votes are cast, Americans from the president down have expressed anxiety over what could be a protracted ballot count.

As the US has suffered through the deadliest coronavirus outbreak on the planet, many states have expanded early voting to reduce contagion-spreading crowds at polling stations.

A record-setting 97.7 million early votes had been cast either in-person or by mail as of Monday afternoon, representing about 40% of all Americans who are legally eligible to vote.