What Africa's Drought Responses Teach Us About Climate Change Hotspots

The efforts that local communities are taking, such as organising workshops to share concerns and solutions, can inspire the whole world to come together for such crisis. 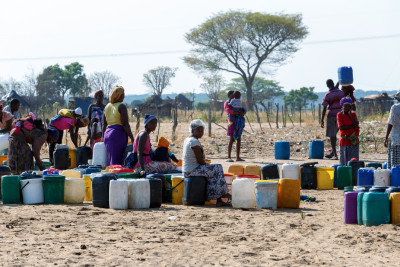 People in Namibia are seeking ways to reduce vulnerability to problems like drought. Credit:Shutterstock

The world may still argue about whether or not climate change is for real. But in vast expanses of arid southern Africa, the daily struggle to cope with a changed climate is well under way. The lessons being learnt here on a small scale could prove vital in the fight for human survival.

The impact of drought has been felt acutely this season over southern Africa, as El Nino hit hard. Perhaps this is what we might expect under future climate change conditions and so we had better learn how to prepare for it: more frequent years that record less rainfall than usual, along with the associated crippling impact on livelihoods and the economy.

This is particularly the case in semi-arid regions of Africa and Asia. These climate change hotspots are highly dynamic systems that already experience harsh climates, adverse environmental change and a relative lack of natural resources. People here are often further marginalised by high levels of poverty, inequality and rapidly changing socio-economic, governance and development contexts.

This requires an effective response. In northern Namibia and eastern Botswana, research is already under way into what’s currently working and not working in relation to managing climate impacts. A major regional project is seeking ways to reduce vulnerability and develop longer term climate adaptation responses.

The Adaptation at Scale in Semi-Arid Regions (ASSAR) project aims to redress the lack of information about the best ways to minimise vulnerability and develop adaptation responses. In addition it aims to produce future-focused and societally-relevant knowledge of pathways to well being.

One of the initial steps has been to undertake vulnerability and risk assessment workshops. The case study sites are in northern Namibia’s Omusati region and eastern Botswana’s Bobonong district. These workshops differ from many vulnerability assessments that often focus either on the village scale or on a resource-based sector. The workshops bring together people from all walks of life. These include village leaders, non-governmental organisations and government officials among others. This group is called the Knowledge Group. Issues and hazards of most concern are identified through prior interviews and then refined by this group. During a two-day workshop the Knowledge Group unpacks how the most important issues impact different livelihood groups in the area and the best responses.

During workshops in Botswana in November 2015 and in Namibia in March 2016, drought was found to be one of the three most important issues facing both regions. One of the exercises was to develop an impact chain to assess possible positive and the negative future impact of drought.

Groups mapped how drought affects the biophysical system – farming, water and natural resources, for example – and then how this will further impact on families’ lives, economic activities and broader political and institutional environments.

In Namibia, the indirect impact of drought on livelihoods that were identified included:

Impact of drought in Botswana

In Botswana, there were some similarities and some additional points that were raised related to the impact of drought:

One of the strengths of the workshops is that they help the Knowledge Group to identify solutions they think could be strengthened or implemented at the local or district level. So in Namibia, there was a discussion about promoting food banks to address food insecurity at the community level. As part of this, each household is encouraged to contribute 20 litres of mahangu (millet) that is stored by the traditional authority and used in time of distress.

In Botswana, a number of strategies were mentioned like irrigation using underground water, leaving phane worms on the ground to allow them to reproduce for the next season and using water harvesting more. There was also support for moving away from dependency on government projects.

In Namibia, the regional actors talked about the impact of drought on their activities. Water in northern Namibia is transferred from Angola first through an open canal and then through a piped reticulation system. When there is a drought there is greater demand for water and people land up damaging the canal when getting water for their livestock. This reduces both the overall amount of water and reduces the water pressure.

The decrease in water pressure reduces the reliability of water supply for the villages at the end of the pipeline. During droughts people move even further afield with their livestock for grazing and so require water in these far off areas too. These additional challenges not only compromise the water supply system, but lead to increased maintenance and operational costs.

To help meet the water supply demands, the Omusati Directorate of Rural Water and Sanitation requests resources from the national level to drill more boreholes, particularly in remote areas. NamWater also has plans to improve the quality and extent of pipes in the area over the coming five years.

The Department of Planning, in the Regional Council, is central to managing drought, even though this might not be obvious at first. It helps with sanitation which is particularly important during disease outbreaks that commonly occur during drought. It also tankers water into villages when supply is low.

One of the department’s responsibilities is for constructing clinics, hospitals and schools. Illustrating how drought can impact on these services, the director explained that the construction of a school in the region had been put on hold for two months in 2016 as there was not enough water for the building process. Examples like this show how education and other services can be impacted by drought directly.

It is clear that drought is already affecting many parts of the system in semi-arid regions. Unfortunately with climate change, drought is likely to become more frequent. It is critical to assess the viability of scaling up successful local solutions as well as identifying new solutions. Importantly, this needs to be done by including local stakeholders, as well as local government and NGOs and connecting them to international funding and organisations.

This article was originally published in The Conversation. Read the original article here.