Afghanistan Evaluates ISIS Threat in the Wake of Kabul Attack 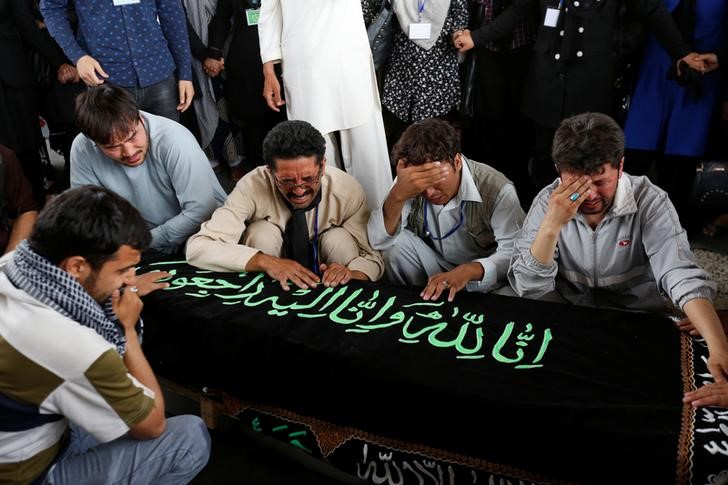 Men mourn over the coffin of a victim a day after a suicide attack in Kabul, Afghanistan July 24, 2016. Credits: REUTERS/Mohammad Ismail

Kabul: ISIS is threatening more attacks against Afghanistan‘s Hazara minority after Saturday’s suicide blasts in Kabul that killed 80 people, pledging to retaliate against support by some in the mainly Shi’ite group for the Assad regime in Syria.

But assessing the threat from Daesh, as ISIS is known in Afghanistan, is difficult.

Some question whether it was really responsible for Saturday’s blasts and some officials ask whether the ultra-radical Sunni movement, hitherto largely confined to an area near the border with Pakistan, poses a wider challenge.

A Daesh commander who uses the name Abu Omar Khorasani said the bombing of the rally by thousands of Hazaras protesting about the route of a new power line was in retaliation for the support offered by some members of the community to the regime in Syria.

Many Hazaras have gone through Shi’ite-governed Iran to fight for the government of President Bashar al-Assad, a fellow Shi’ite, against ISIS.

“Unless they stop going to Syria and stop being slaves of Iran, we will definitely continue such attacks,” the militant commander told Reuters by telephone from an undisclosed location.

“We can and we will strike them again.”

The government says it has been hitting Daesh hard even before Saturday’s blasts, one of the most deadly attacks in the country since the beginning of the Taliban insurgency in 2001.

It said government forces had killed hundreds of insurgents in the past two months in assaults on Daesh strongholds in the eastern province of Nangarhar, which straddles the highway from Kabul to the Pakistani city of Peshawar.

In the latest fighting, at least 122 insurgents were killed in the past 24 hours, it said on Tuesday. The numbers could not be independently confirmed.

Nevertheless, Saturday’s attack on the Hazara minority adds a dangerous complication to the war the Western-backed government in Kabul has been fighting with Taliban insurgents.

As well as the risk of dragging Afghanistan into ISIS‘s wider campaign in the Middle East, it raised the spectre of sectarian violence, something Afghanistan, a majority Sunni country, has largely been spared during decades of war.

But while seeing the threat, officials are cautious about whether the attack represents a real turning point for Daesh, which has been under heavy pressure this year from both US air strikes and Afghan ground forces.

“Having a couple of people that you’ve hired put on a suicide vest and sneak into a crowd of many thousands really is not that sophisticated,” said US military spokesman Brigadier General Charles Cleveland.

Attacked in Pakistan as well

On the ground, the NATO-led force advising government troops estimates the number of Daesh fighters at between 1,000 and 3,000, many of them former members of militant groups like the Pakistani Taliban, the Islamic Movement of Uzbekistan and the Afghan Taliban.

Many of the Daesh fighters operating in Afghanistan are from the Orakzai tribe on the Pakistani side of the border. Those militants have also been hit hard by the Pakistani military, according to an Afghan security report seen by Reuters.

While the movement may have been limited to eastern Afghanistan, that need not stop it from seeking to spread violence and raise its profile with more attacks on civilian targets, officials said.

“That’s our concern, these high profile attacks, they are effective because they’re not that difficult to achieve,” Cleveland told reporters in Kabul.

The Hazara, who have long suffered violence and discrimination in Afghanistan, have responded with fury to the attack, accusing the government of inaction or worse. Some even doubt ISIS‘s claim of responsibility.

“There is no evidence to prove Daesh’s involvement. It could have been others,” said Dawood Naji, one of the organisers of Saturday’s rally.

“I don’t think Daesh would be a major concern for Afghan people because they are not very active and have no foothold.”

Government and NATO force officials insist, however, that ISIS is being hit hard.

The Afghan army has launched its first major offensive since the holy month of Ramadan in Nangarhar.

According to the interior ministry, 654 Daesh and Taliban fighters, including several senior commanders have been killed in Nangarhar in the last two months.

On Monday, Afghan special forces killed Sahad Emarati, a senior Daesh commander and destroyed training camps during a firefight in the province, said Attahullah Khogyani, a spokesman for Nangarhar’s governor.

“We think that Daesh is under pressure,” Cleveland said. “As their terrain gets restricted, you see them trying to conduct more external operations and attacks.”