A Generator, Four Palestinians and Five Israeli Soldiers: You Know What Happens Next

In A-Rakiz, settlers sent soldiers in to put a stop to a Palestinian man's "criminal act" of fixing the roof. He is now paralysed below the neck. 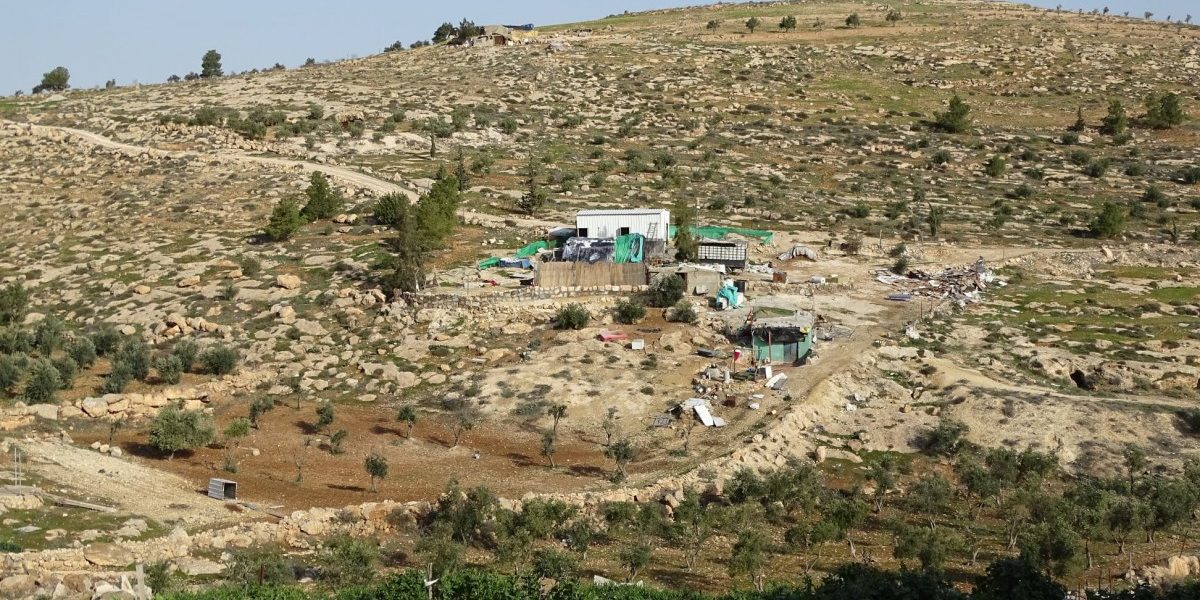 A-Rakiz is perched on the sharp spine of a rocky ridge in the South Hebron hills. It would be a charming, if rugged, place to live were it not for the ruins of its houses scattered over the village lands and for the two illegal settlements of Avigail and Chavat Maon on either side. A-Rakiz has a history of house demolitions going back some years. On November 25, 2020, the army destroyed another five houses there, including that of Harun’s parents, Rasmi and Farsi, and the one Rasmi built for Harun and his bride-to-be. Since then the family has been living in one of the caves still more or less intact in the village. It’s cold in the cave during these winter months. I know, I sat there with the parents for some hours last week. 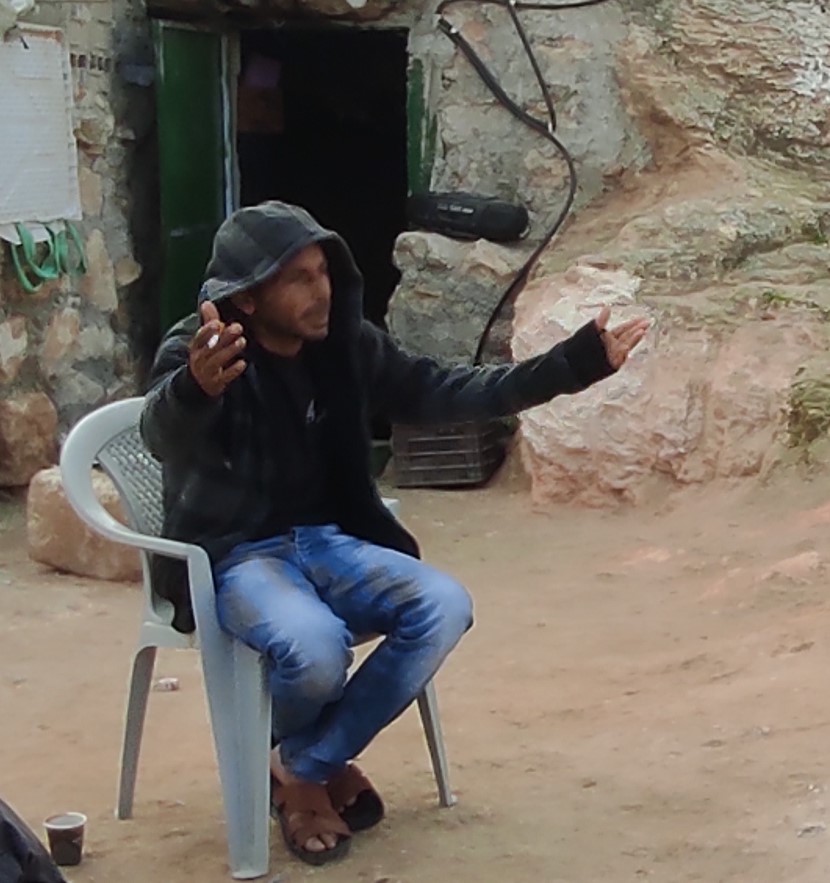 Ashraf, Harun’s neighbour, lives in his compound of shacks and sheep-pens just across the wadi, on an isolated hill next to a dirt road. On New Year’s day, Ashraf was fixing a roof over one of the sheep-pens. He had rented a generator to give him power to saw through the metal bars and corrugated slabs he needed for the roof. January 1 was a Friday. The soldiers usually don’t come into A-Rakiz on Fridays, before their Shabbat. So it seemed to Ashraf that he could work freely that day, which was dry and cold. That was before he sighted the drone hovering over his home. He knew it belonged to the settlers and that it probably meant trouble. 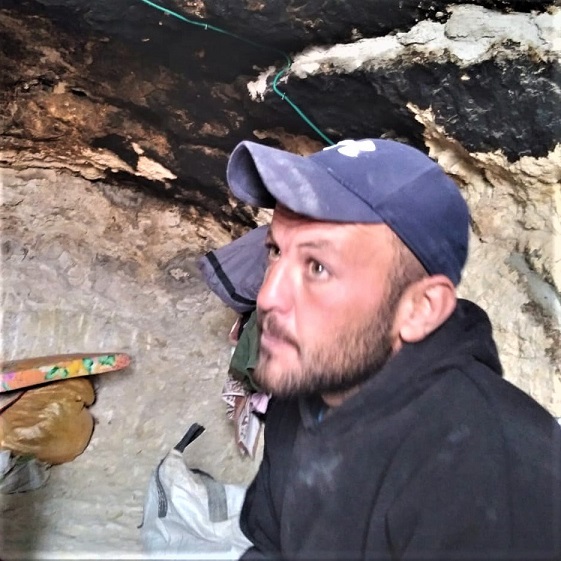 Harun, 24 years old, was soon to marry. He has a younger brother, Muhammad, sixteen, who worships Harun, and five sisters. The youngest is Doha, five years old. Harun left school when he was around twelve and went to work—herding the family’s sheep and goats, also working on the refuse dumps, scavenging for scrap metal, which is worth some money. For the last couple of years, he worked on building sites inside Israel, though he couldn’t get the permit that Palestinians are supposed to have. It’s really hard to get one. They caught him, and he was supposed to appear before a military court on January 4, but that turned out to be impossible. 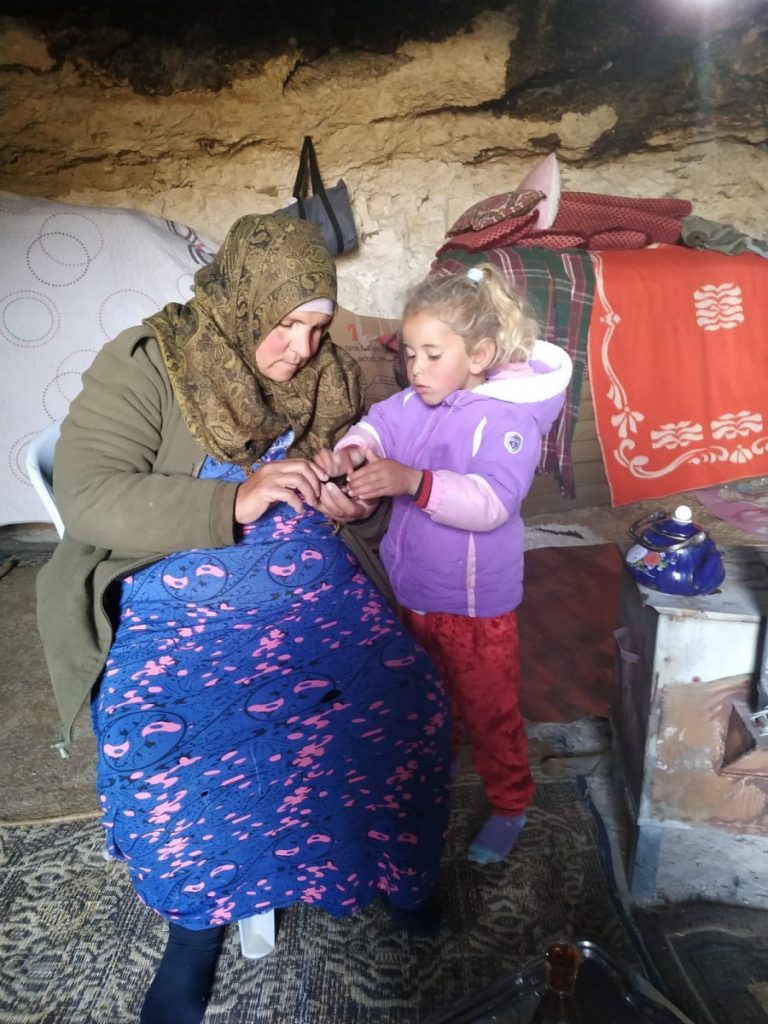 Farsi, Harun’s mother, is a strong-willed, articulate woman overtaken by catastrophe. She told me the story. I already knew most of it from the reports in the papers and on the internet, but hearing it from her lips was different. She stopped in the middle a few times, to cry. 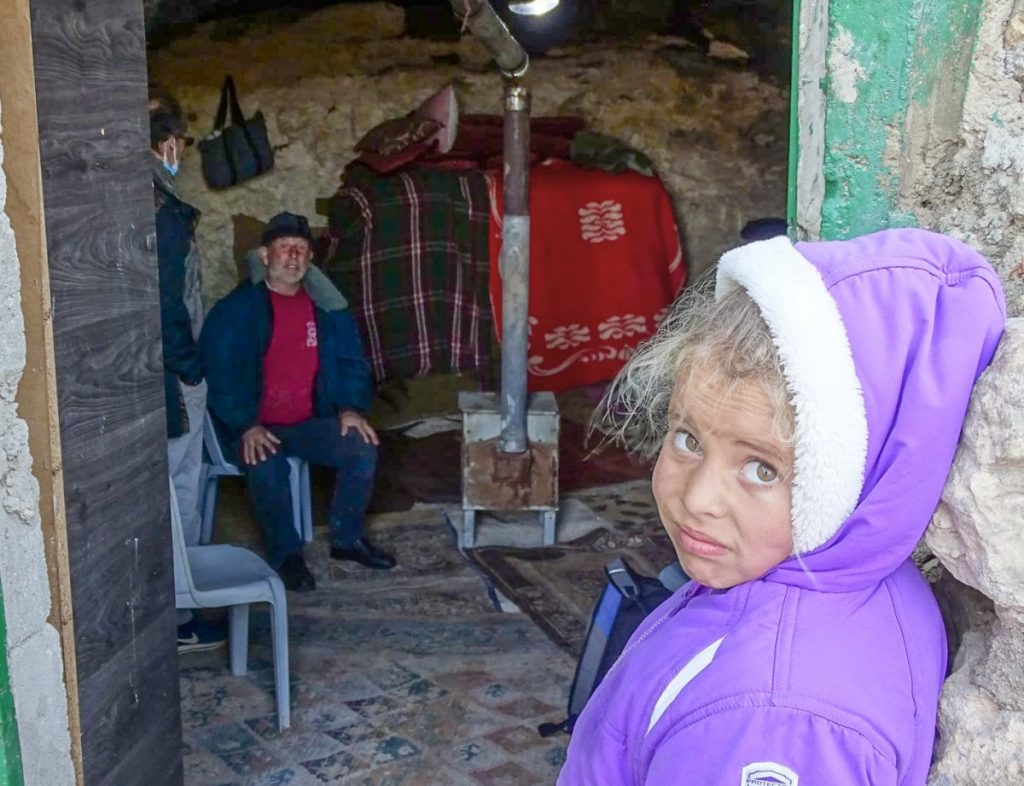 Rasmi, Harun’s father, was rushing off to the hospital to be with Harun, as he does every day, but he welcomed us gently into the cave and sat with us for a few moments, as the ancient tradition of hospitality requires. Everyone says he is a kind man. He has the weather-beaten look of a Palestinian man from the South Hebron hills. 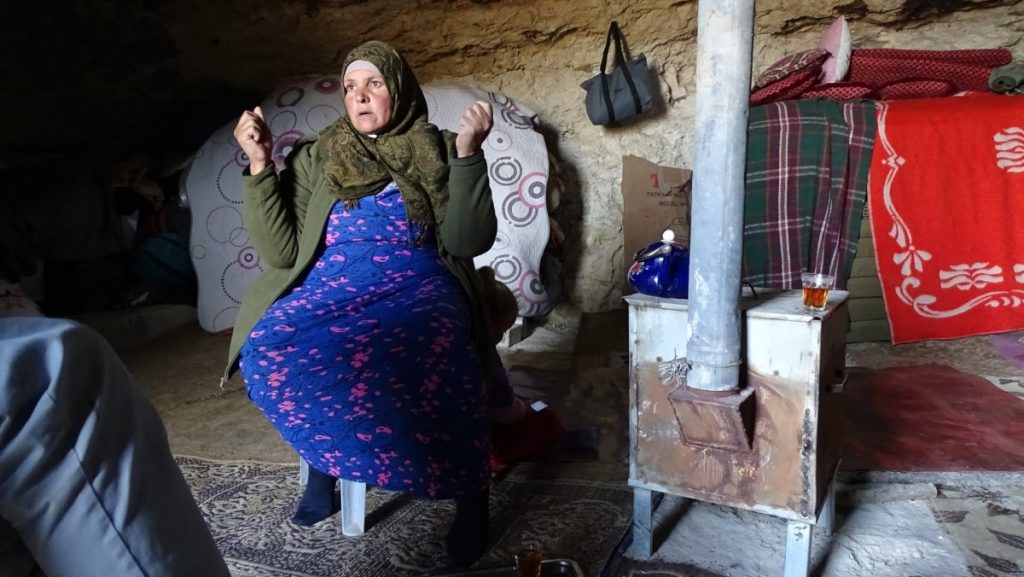 I’ll give a précis of the story, as Farsi narrated it; many of you know it already. Farsi witnessed all of it, and by now she has told it many times. The settlers sent the soldiers in to put a stop to Ashraf’s criminal act of fixing the roof. Around 2 pm five soldiers invaded Ashraf’s house, humiliated his wife and son, and found an electric generator, which they promptly confiscated. Why is a Palestinian not supposed to have or use a generator? Let’s put aside that question. 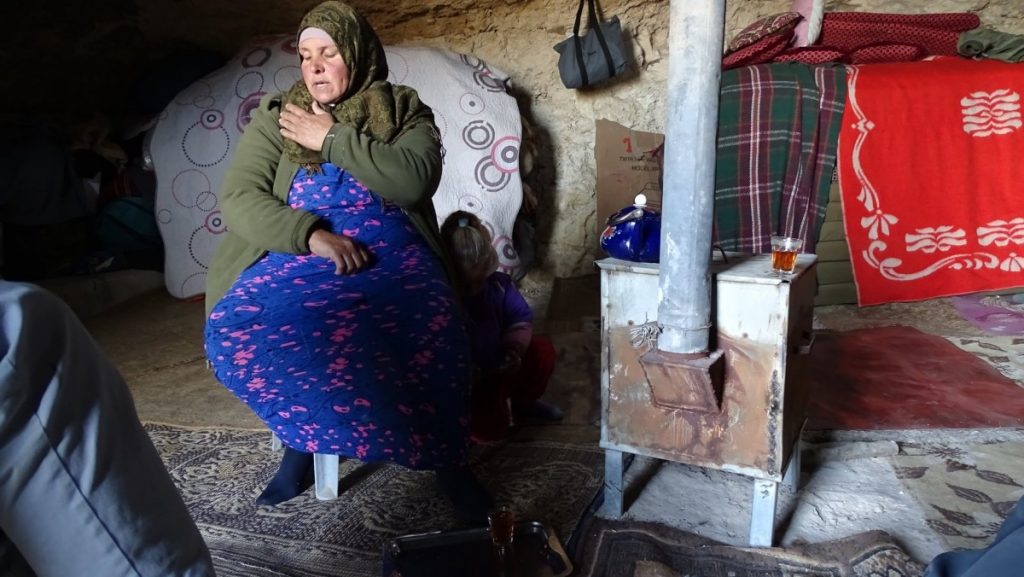 The soldiers carried the generator to their vehicle. Ashraf protested, so they beat him up. Rasmi, Harun’s father, ran to help his neighbour. The soldiers beat and kicked Rasmi as well. Harun saw what was happening and tried to save his father. So Harun, too, was beaten. Now Ashraf, Rasmi, Harun, and another neighbour, Murad, pried the generator out of the soldiers’ hands. It was, by the way, a very rudimentary generator, worth at most a few hundred shekels. If you knew A-Rakiz, you would understand what the loss of a generator means. 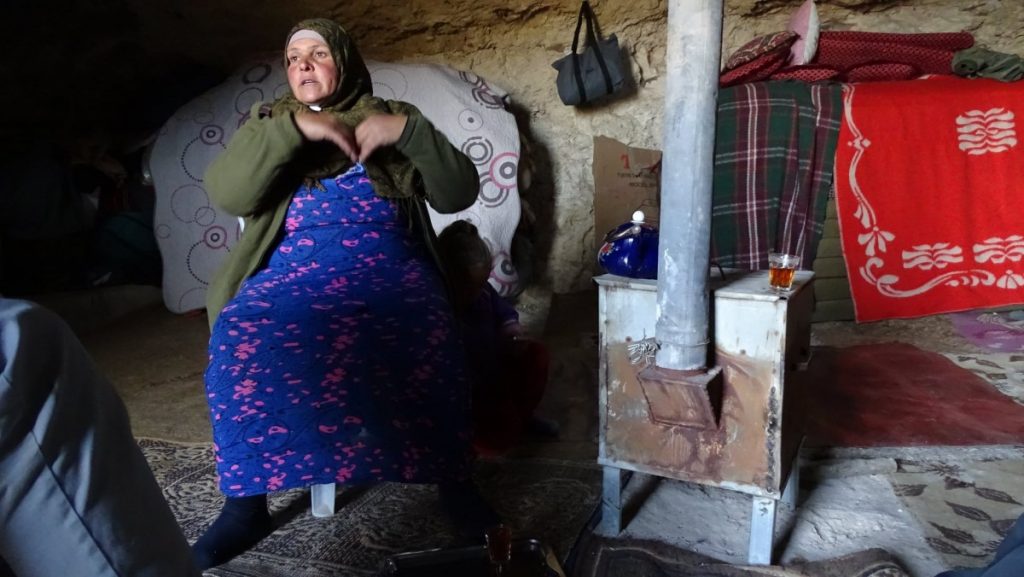 Four soldiers pitted against four Palestinians. The fifth soldier, from the Civil Administration, watched from the side; at some point, he shot in the air.  There was lots of yelling and confusion. The generator changed hands several times. In the scuffle, a soldier shot Harun from point-blank range. The bullet penetrated his throat and severed the spinal cord between vertebrae 6 and 7. [See the video.] The soldiers shot off at least eighteen more bullets (the casings were found by the villagers). They then left the village, with the generator, and set up an ambush on the road.

Here is the hardest part of the story. Harun, shot in the neck, bleeding to death, is being taken to hospital in Ashraf’s car. Ashraf is driving, and Rasmi, Harun’s father, is with them. The car is stopped by the same soldiers who had stolen the generator, and one of whom had shot Harun. They shoot at the tires of the vehicle, puncturing one of them. Miraculously, Ashraf manages to drive on three wheels to the village of Twaneh, where Harun is transferred to another car. It, too, is stopped at an army roadblock on the main road: the same soldiers again. The driver manoeuvres past the roadblock and makes it to the hospital none too soon. Ten minutes later, the doctors say, and Harun would not have survived.

He is paralysed from the neck down and breathes with an oxygen machine. Maybe eventually he’ll recover his ability to breathe on his own. He is conscious but unable to speak because of the tracheal oxygen catheter. He mainly communicates with his eyes. He will probably be paralysed for life. If he can be transferred to a rehab hospital in Israel—this might even happen soon—there is some slight hope that his situation will improve. He might even get back some sensation and a little mobility in his upper limbs. Farsi says he has some residual feeling in his hands. She worries about Muhammad, the younger brother. Harun was everything in the world to Muhammad—model, teacher, adviser, friend. If Harun lives, he’ll be in hospital for many months. And then what? 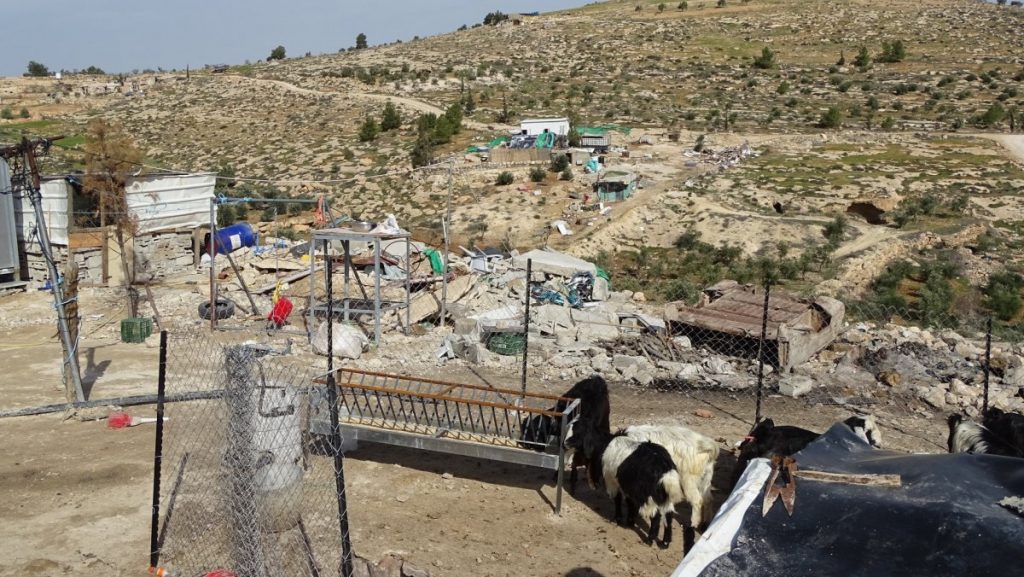 It’s a sunny winter day in South Hebron. I’d forgotten how cold it gets there. The wind cuts through you like the shock of grief, and the sunlight is frozen crystal. We visit the ruins of the houses destroyed on November 25, including Farsi and Rasmi’s home behind the sheep pen, and next to it the house for Harun and his bride. An orphaned village, hanging on amidst the splendid hills and wadis. 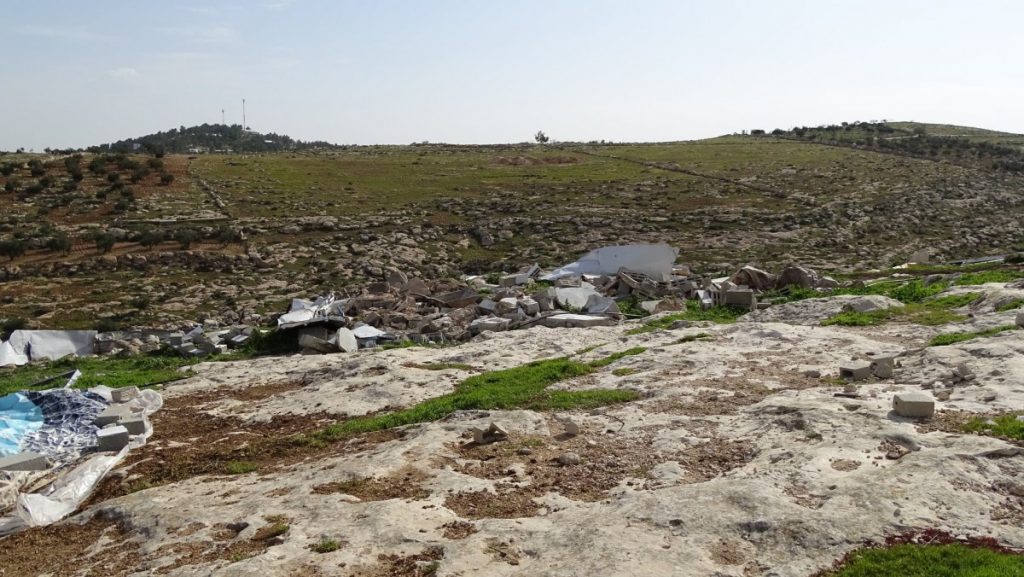 Maybe the government thinks that, with the new administration in the US, this is their last chance for a while to wreak havoc in the territories. It’s all about final and formal annexation, a de facto reality in any case. And it’s about all the rest, apartheid, extreme cruelty, eternal Jewish domination—except that eternity may yet turn out to be shorter than expected. 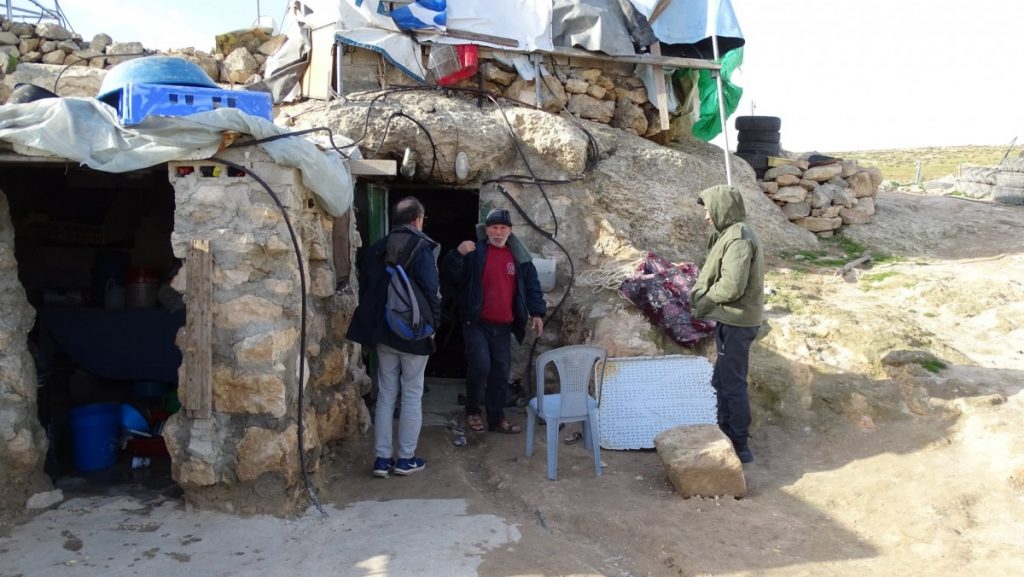 I knew the story, but I needed to meet the family and hear it directly from Farsi. And I wanted to be with them—at least that. Since then, I find it hard to think of other things. A life shattered on a soldier’s whim. But the main thing is that this one swift incident illumines, like a flash of lightning, like a rifle shot, the inner logic of the occupation as a whole. It was by no means an aberration, an exception, an unwitting mistake. No one knows what the soldier who shot was thinking, maybe he panicked, maybe he hates Arabs, and though he will have to live with what he did for the rest of his life—who knows, maybe remorse will work its terror and its magic in his heart—once the soldiers came to the village on their ugly, hair-brained mission, all the rest followed naturally, perhaps inevitably. The ultimate wickedness, probably a decision, followed afterwards, at the roadblocks.

On March 2, the soldiers came back to A-Rakiz and wrecked another home, Khatim’s. A sane person might think that after what happened to Harun, they’d leave A-Rakiz alone for a few weeks. The sane person would be wrong.

Maybe Allah will miraculously heal Harun. Farsi utters this sentence many times in the course of the morning. Inshallah, we all say. May Allah give you health. I promise her I will tell the story, so that even people very far away will know and feel her pain.