"We want social justice, citizenship, and are against sectarianism, and this is also what Iraqis want." 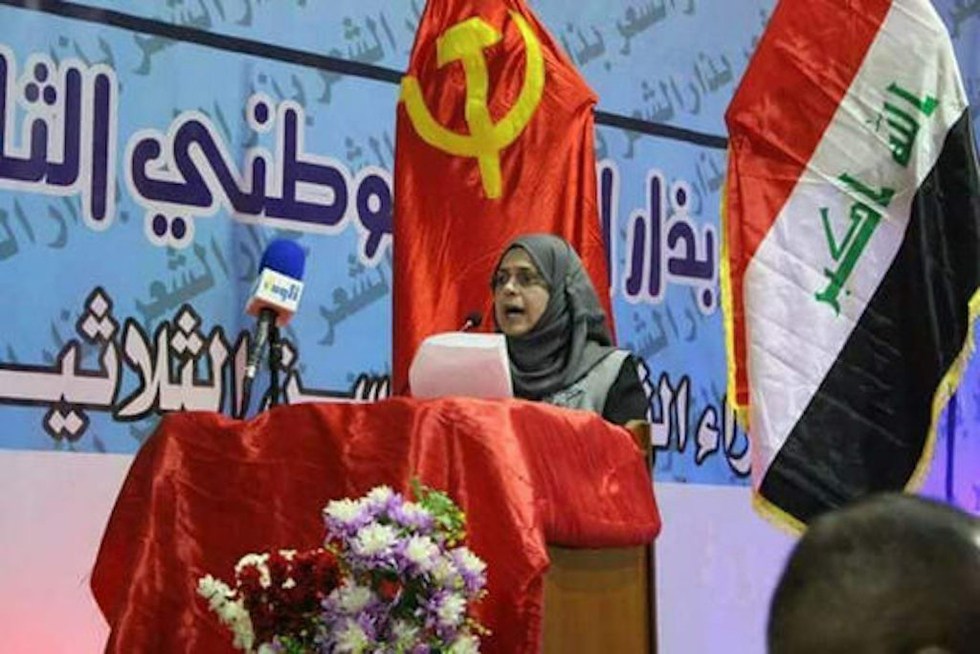 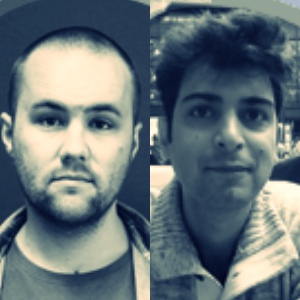 Baghdad: Iraqis appear to have broken with the political establishment in response to what they see as rampant corruption and incompetence.

The biggest winner in the elections on May 12 was the boycott movement, which was evident after it emerged that only 44.5% of eligible voters went to the polls.

But those who did vote overwhelmingly cast their ballot for the Sairoun Alliance, a coalition of supporters of the Shia cleric Muqtada al-Sadr and the Iraqi Communist Party (ICP), as well as the smaller Iraqi Republican Party.

Not many could have predicted the formation of such an alliance a few years ago, much less anticipated that it would end up resonating with so many Iraqis.

The union between the religiously conservative Sadrist movement and the ultra-secular ICP seemed baffling to outside observers, but it appears to have created a successful synthesis.

One of those who appears to best typify the new politics is Suhad al-Khateeb, a communist who won a parliamentary seat for the religious city of Najaf – one of the most important hubs of Shia Islamic theology.

Khateeb, who is a teacher, anti-poverty activist and women’s rights activist, had not considered running in previous parliamentary elections.

“I didn’t run in the [2014] election, but I was part of a group that visited people all over the Najaf,” she told Middle East Eye.

“We visited them to listen to their problems and help them, in the slums of Najaf and the poor neighbourhoods. I had not thought about running in elections.”

However, she was motivated to run on the Sairoun Alliance ticket this time around after garnering support from her colleagues and students.

“People visited me at school. They looked up to me and saw me as a role model of how a politician should be,” she explained. “My colleagues, who support various political parties, respect me and support me.”

During the Cold War, communism and Islamism were, for the most part, existential enemies. In the Middle East, the two were in regular conflict, with the former accused of being “godless atheists” and the latter accused of “clerical fascism.”

Muhsin al-Hakim, whose grandson, Ammar, led the Al-Hakim party at the elections, was responsible for issuing religious edicts in the 1950s branding communism incompatible with Islam, helping make the then-powerful ICP unpalatable to many religious voters.

But political alliances between communists and Shia Islamists are not entirely unheard of.

In the 1950s, prior to the Hakim edict, there were alliances between nationalist-minded Shia families and the communists – not least because many of the latter came from the former – against the UK-backed Hashemite monarchy.

Najaf, much like the rest of Iraq, has seethed at the rampant unemployment, corruption and cronyism that has typified the current political class in the country.

On 6 May, at the opening of the new Najaf International Stadium in the city, crowds bombarded the prime minister’s spokesperson as he attended the opening event, with cries of “you are all thieves!”

Disgruntled Iraqis booing one government official after another at opening ceremony for Najaf Stadium.. crowds kept chanting “you are all thieves!”pic.twitter.com/546bO6R8KE

The ICP’s general secretary, Raid Jahid Fahmi, explained that in preparation for the elections, his party and the Sadrists had agreed to focus on a number of issues with shared goals – fighting unemployment and corruption and combatting external influence on Iraq – rather than emphasising ideological differences evident in issues like women’s rights or secularism.

For Muqtada al-Sadr and his allies, the next step is to form a government, which must be done within 90 days.

While they have reached out to current Prime Minister Haider al-Abadi and a number of other parties, including Kurdish ones, they appear to have specifically excluded the Fatah Coalition and former Prime Minister Nouri al-Maliki’s State of Law coalition from a possible future alliance. The latter two parties are the most closely linked to Iran.

Limiting Iranian influence in Iraq has been one of the benchmarks of Sadrist policy. As supporters poured into Baghdad’s Tahrir Square to celebrate Sairoun’s apparent victory on Monday, they chanted: “Iran is out, Iraq is free” and “Bye bye Maliki”.

Though Iran has long been influential in the holy Iraqi cities of Karbala and Najaf, there are growing fears that rising tensions between the Islamic Republic and its regional neighbours – particularly Israel and Saudi Arabia – could end up engulfing Iraq.

“There is a conflict between Iran and the US in the region, in Iraq, Yemen and Bahrain,” said Khateeb, “But we, the Iraqis, want our independence back from the US and Iran.”

“These two counties would harm the Iraqis with their conflict.” 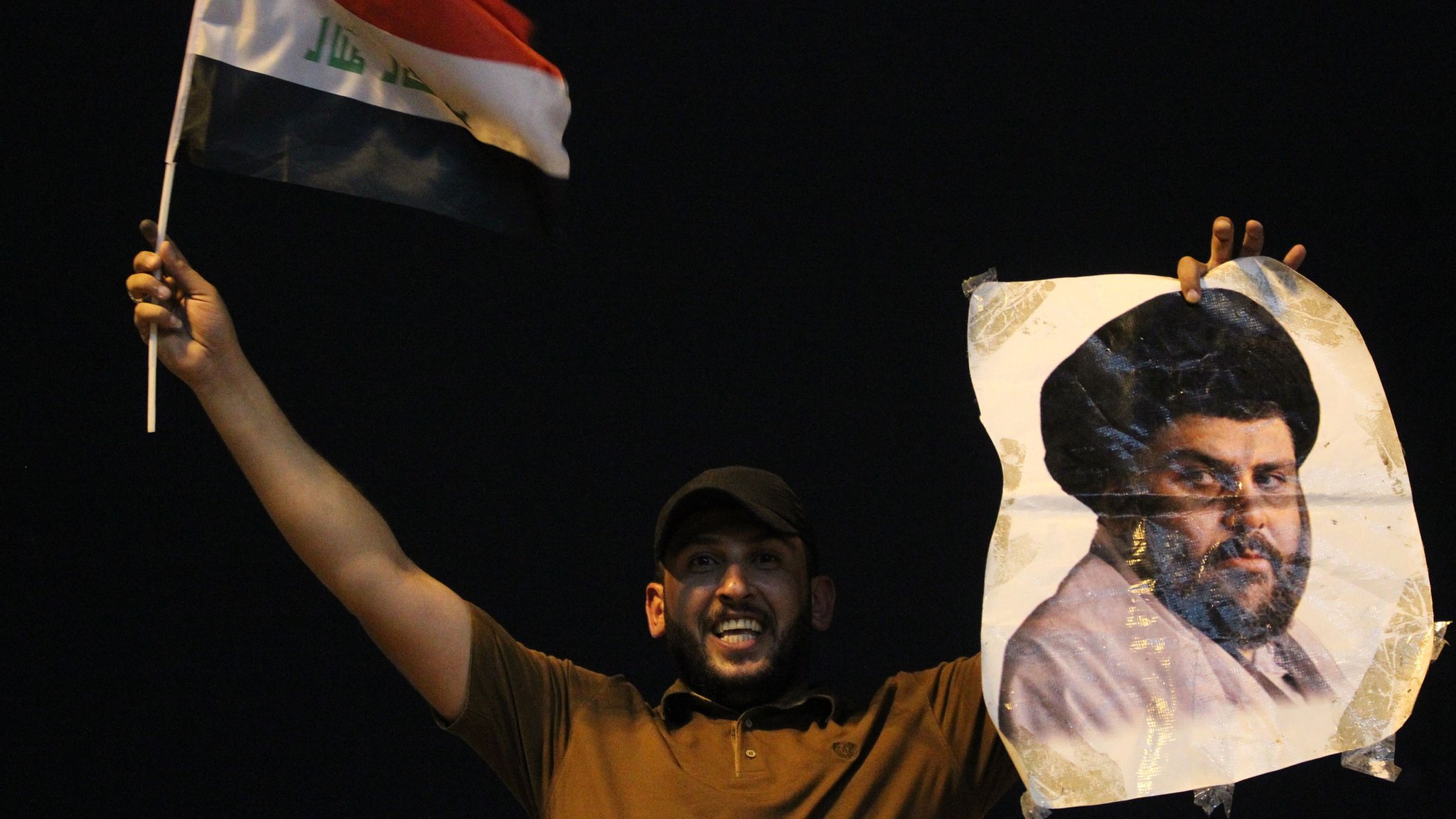 A supporters of Muqtada al-Sadr in Baghdad. Credit: Reuters

But marginalising Iran will be difficult with Fatah, which is composed of Tehran-backed militia members, having garnered the second largest number of votes in the election.

If the anti-Iran camp cannot come to an agreement within 90 days, pro-Iran forces could reassert themselves.

The success of the Sairoun Alliance also cannot mask the fact that, to a greater extent, Iraqis simply refused to take part in the electoral process. In the capital Baghdad, which accounts for 69 seats in parliament, only 33% of people actually voted.

“I think the main thing is not to get too carried away by Sadr’s success, which is chiefly a factor of low turnout,” said Patrick Osgood, an Iraq analyst.

“It’s the governing coalition process that matters and that promises to be a real horlicks.”

He added: “Iran still gets a vote.”

The result of Iraq’s elections, which was widely expected to favour Abadi’s Nasr Coalition (it came third), has taken many by surprise, both inside and outside Iraq.

But the real difficulty will come as horse-trading begins over the creation of a new government and building alliances without watering down the promises made by Sairoun during its campaign.

“Sairoun supports the people in many different ways. It represents Iraqis, and we the Iraqi Communist party have a long history of honesty – we were not agents for foreign occupations,” said Khateeb.

“We want social justice, citizenship, and are against sectarianism, and this is also what Iraqis want.”