Turkey's government and most of the opposition have shown rare unity in their rejection of the largely symbolic move which breaks away from decades of carefully calibrated language from the White House. 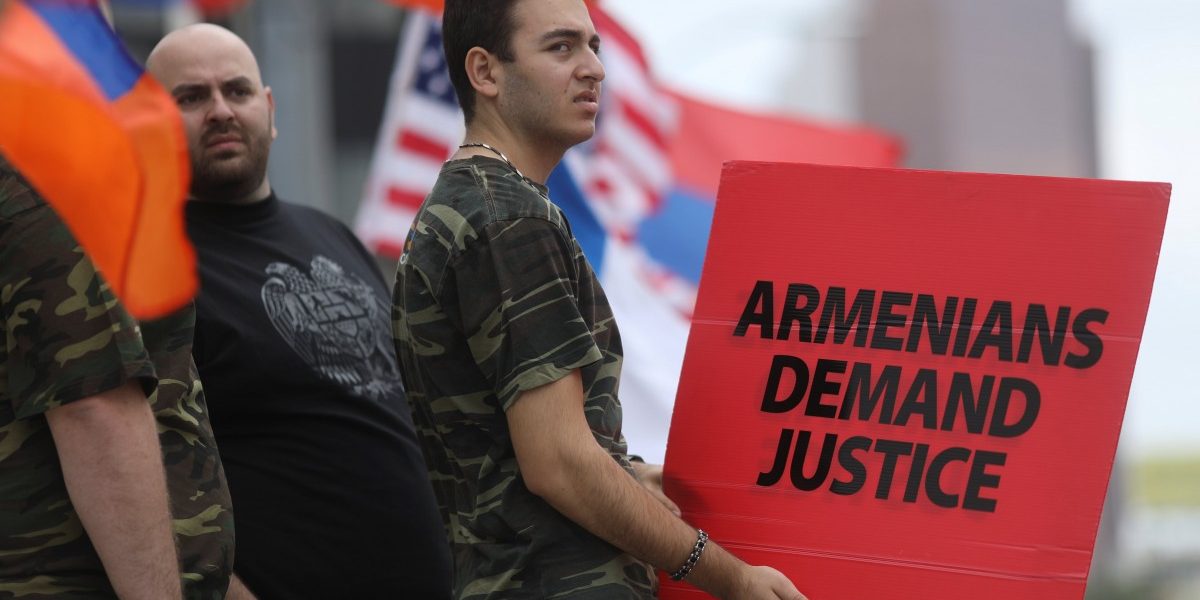 A man holds a placard as members of the Armenian diaspora in the U.S. rally to mark the anniversary of the 1915 genocide, in Los Angeles, California, U.S. April 24, 2021. Photo: REUTERS/David Swanson

US President Joe Biden said on Saturday that the 1915 massacres of Armenians in the Ottoman Empire constituted genocide, a historic declaration that infuriated Turkey and further strained frayed ties between the two NATO allies.

The largely symbolic move, breaking away from decades of carefully calibrated language from the White House, was welcomed by the Armenian diaspora in the United States, but comes at a time when Ankara and Washington grapple with deep policy disagreements over a host of issues.

Turkey’s government and most of the opposition showed rare unity in their rejection of Biden‘s statement. Foreign Minister Mevlut Cavusoglu said Turkey “entirely rejects” the US decision which he said was based “solely on populism”, while the opposition denounced it as a “major mistake”.

Biden‘s message was met with “great enthusiasm” by the people of Armenia and Armenians worldwide, Armenian Prime Minister Nikol Pashinyan wrote in a letter to the US president.

In his statement, Biden said the American people honour “all those Armenians who perished in the genocide that began 106 years ago today.”

“Over the decades Armenian immigrants have enriched the United States in countless ways, but they have never forgotten the tragic history,” Biden said. “We honour their story. We see that pain. We affirm the history. We do this not to cast blame but to ensure that what happened is never repeated.”

In comments that sought to soften the blow, a senior administration official told reporters that Washington continued to see Turkey as a critical NATO ally and was encouraging Armenia and Turkey to pursue reconciliation.

For decades, measures recognising the Armenian genocide stalled in the US Congress and most US presidents have refrained from calling it that, stymied by concerns about relations with Turkey and intense lobbying by Ankara. Ronald Reagan, the former US president from California, a hub for the Armenian diaspora in the United States, had been the only US president to publicly call the killings genocide.

Turkey accepts that many Armenians living in the Ottoman Empire were killed in clashes with Ottoman forces during World War One, but contests the figures and denies the killings were systematically orchestrated and constitute a genocide.

In Montebello, California, a city in Los Angeles County that is home to many Armenian-Americans, members of the community held a small and somber ceremony during which they placed a cross made of flowers at a monument to the victims. Some attendees wore pins reading “genocide denied genocide repeated.”

Raffi Hamparian, chairman of Armenian National Committee of America, said in a statement that Biden‘s “principled stand … pivots America toward the justice deserved and the security required for the future of the Armenian nation.”

A year ago, while still a presidential candidate, Biden commemorated the 1.5 million Armenian men, women and children who lost their lives in the final years of the Ottoman Empire and said he would back efforts to recognise those killings as a genocide.

Ties between Ankara and Washington have been strained over issues ranging from Turkey’s purchase of Russian S-400 air defense systems – over which it was the target of US sanctions – to policy differences in Syria, human rights and a court case targeting Turkey’s majority state-owned Halkbank.

Biden‘s declaration follows a non-binding resolution by the US Senate adopted unanimously in 2019 recognising the killings as genocide.

Previous US presidents have abandoned campaign promises to recognise the Armenian genocide for fear of damaging US –Turkish relations, said Nicholas Danforth, non-resident fellow for The Hellenic Foundation for European and Foreign Policy.

“With relations already in shambles, there was nothing to stop Biden from following through,” said Danforth. “Ankara has no allies left in the US government to lobby against this and Washington isn’t worried whether it angers Turkey anymore.”

Turkey’s President Tayyip Erdogan had established a close bond with former US President Donald Trump, but since Biden took over, Washington has grown more vocal about Turkey’s human rights track record. It has also stood firm on its demand that Ankara get rid of the Russian defense systems.

Biden had also delayed having a telephone conversation with Erdogan until Friday – seen largely as a cold shoulder to the Turkish president — when he informed him of his decision to recognise the massacres as genocide.

Despite the tense relations, Erdogan and Biden are due to meet in June on the sidelines of a NATO summit in Brussels.

Saturday’s announcement was slammed by the Turkish government and several opposition politicians. Faik Oztrak, the spokesman for the main opposition Republican People’s Party, said “it will open wounds that will be difficult to repair not only on US-Turkey ties but also on a potential compromise between the people of Armenia and Turkey.”

The US Embassy in Turkey said its missions in the country would be closed on Monday and Tuesday for visa services due to the possibility of protests.