The embassy on Wednesday issued a detailed list of Indians who were hospitalised, went missing or survived the tragedy. 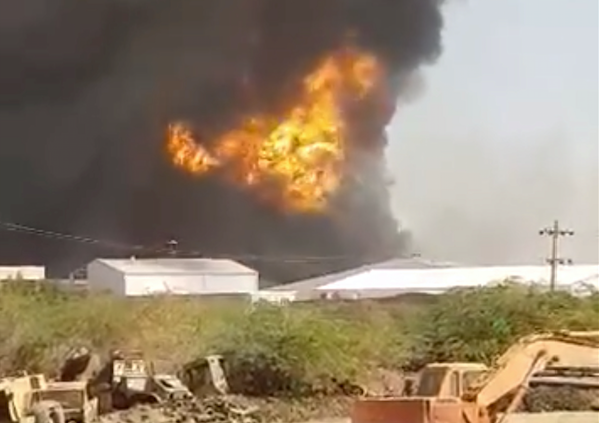 New Delhi: At least 18 Indians were among the 23 people killed and more than 130 injured when a gas tanker exploded while unloading at a ceramic factory in Sudan, the Indian mission at Khartoum said on Wednesday.

Sixteen Indians were missing after the incident that happened at Seela Ceramic Factory in Bahri area in Khartoum, Sudan’s capital, on Tuesday. The blast was so powerful that it blew the tanker into a nearby lot, according to witnesses and a senior civil defence official quoted by Reuters.

Video footage showed people running and shouting for help at the site of the accident. Flames and smoke billowed from the factory as volunteers and security forces tried to put out the fire.

The fire completely destroyed the factory, a government statement said.

The Embassy representative has rushed to the site. A 24-hour emergency hotline +249-921917471 has been set up by @EoI_Khartoum.
Embassy is also putting out updates on social media.

Our prayers are with the workers and their families.

“As per latest reports, but so far not confirmed officially, 18 are dead,” the Indian Embassy said in a release.

“Some of the missing may be in the list of dead which we are still to receive as identification is not possible because of the bodies being burnt,” it added.

The embassy on Wednesday issued a detailed list of Indians who were hospitalised, went missing or survived the tragedy. The missing and hospitalised Indians are predominantly from Rajasthan, Delhi, Uttar Pradesh, Haryana and Tamil Nadu.

Reference trailing Advisory dated 03.12.2019 on the fire incident at the Seela Ceramic Factory, Bahri, Khartoum. As per latest reports, but so far not confirmed officially, 18 are dead. The status of others….contd..

contd… are as per lists given below, but some of the missing may be in the list of dead which we are still to receive as identification is not possible because of the bodies being burnt. pic.twitter.com/SmBu9usj6o

As per the list, seven people have been hospitalised, with four in critical condition. The Sudanese government has called on citizens to donate blood to treat the wounded.

Thirty four Indians who survived have been accommodated at the Saloomi Ceramics Factory residence.

The Reuters report quoted two witnesses at the scene who reflected on the overall confusion.

“I don’t understand what happened, I heard a blast and ran. One man in a galabeya (a long flowing garment) was running behind me, he suffered a serious injury and I was also injured in my leg,” said William, a factory employee.

“I pulled out 14 bodies which were completely burnt,” said Hussein Omar, a volunteer.

An AFP report said that preliminary observations indicated that necessary safety equipment was missing at the site. In addition, inflammable materials were reportedly stored there.

“There were also inflammable materials improperly stored, which led to the spread of the fire,” the government said, adding that an investigation has been launched.