Why Are Khasi Women Being Held Responsible for the 'Dilution' of the Tribe?

Instead of punishing Khasi women for marrying outside the tribe, the men at the helm need to introspect on how their own actions have corroded the matrilineal foundations of the tribe. That the Khasi Hills Autonomous District Council (KHADC) would lash out with a legislation, as it did on July 25, 2018, to curb marriages between women of their tribe and men of other communities, was inevitable. In the hills, fatwas by village durbars or NGOs aimed at restricting alliances between a Khasi woman and a non-Khasi man are neither new nor unusual. But the introduction of the recent legislation is set to divide opinions and exacerbate the conflict even more. At the heart of the issue, which has been rabidly gnawing at the tribe for decades, is the suspicion that an alliance between a Khasi woman and a non-Khasi man is mere social contract that will allow the outsider male to exploit the tribal status of the Khasi woman.

The story of this piece of legislation began in 1997, when the Khasi Hills Autonomous District Council (KHADC) passed the Khasi Social Custom of Lineage Act 1997 (KSCLA) after a long struggle to articulate the issue and provide solutions. This Act defined who a Khasi is, so that the identity could not be easily stolen by unscrupulous people. The Act said such a law was necessitated by the fact that a “large number of people have been misusing the Khasi custom and lineage for their personal interests which has jeopardized and seriously disturbed the socio-cultural life of the Khasi people”. It had a tough passage through the office of the state governor, who took eight years to approve it and make it a law in 2005.

Records reveal that the effort that went into creating such a law goes back right to the late 1970s, when the leaders of the tribe wrestled with problems of surviving as a tribe into the next century. It was introduced as a Bill in 1980 under the title ‘Tribal Lineage Bill, 1980’. It was passed by the KHADC and sent to the governor, and public consultations were held simultaneously. The governor returned the Bill in 1987, raising several points. The Bill was reintroduced in 1992, incorporating all the points raised by the governor. After further consultations, the Bill was unanimously passed as the KSCLA.

Interestingly, several of the then members of the district council (MDC) were sons of non-tribal fathers who wholeheartedly threw their weight behind the legislation.

But the law seemingly failed to serve the purpose. The rising trend of such marriages has roused a cacophony from youth groups, community-based organisations and non-governmental organisations, all of whom are demanding that the law be made more stringent so as to ensure the tribe remains intact. The issue has been hanging fire for decades as very few politicians have the stomach for heading into a sea of controversy bordering on infringing on the privacy of others to ‘bell the cat’. 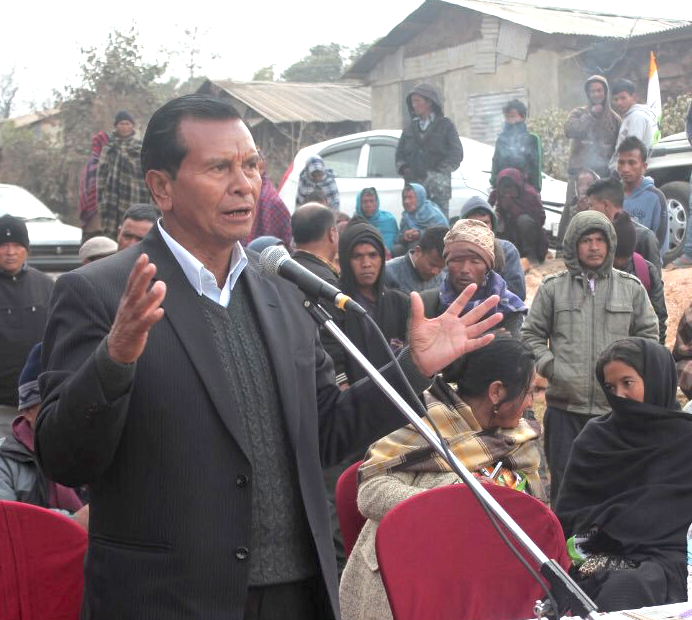 But things took a new turn after the appointment of Hispreaching Son Shylla as the new chief executive member of the KHADC in July this year. Shylla, a member of the National People’s Party, put together a Bill within a couple of weeks of his assuming the CEM’s chair. The newly passed Khasi Hills Autonomous District (Khasi Social Custom of Lineage) Second Amendment Bill, 2018 seeks to strip the rights of being a Khasi from any woman who marries a non-Khasi man. Apart from the title, the woman stands to lose all the privileges of being a member of the tribe. By enacting it this way, the KHADC hopes to cover the breach in the original Act. This time, too, the Bill was unanimously passed and, to add a feather on Shylla’s political cap, he has the weighty support of all three women members of the KHADC.

Shylla claimed the step was not taken in a vacuum but was a result of long years of collective thinking. “By this amendment we are protecting our small tribe from being assimilated and diluted by the larger population surrounding us,” he said, adding that marriage with a tribal woman was used as a license to do business to buy land in the area. Besides, many individuals who could not even speak the Khasi language had taken up the Khasi title to claim reserved category vacancies in the government, he claimed.

This is not the first time the question of what makes one a Khasi has become so contested. A.S. Khongphai versus Stanley D.D. Nichols Roy on May 16, 1965 stands out as a landmark case. Nichols Roy, one of the then leading Khasi politicians, was accused of illegally using the Khasi identity since he was not born of a Khasi mother. His father, though, was Khasi, and his opponents claimed it was not enough. The historic ruling declared that notwithstanding the fact that Nichols Roy took his title from his Khasi father, he was a Khasi because he was recognised as such by the society in which he lived as a Khasi man. This resulted in the setting up of a guideline which has today become the standing rule for making a decision on such disputes.

At present, however, it is the Khasi women, the very core of the matrilineal tribe, who are the targets of the Act and stand to lose their identity as Khasi if they marry outside their community. The attempt to control their lives and preferences has drawn sharp criticisms from leading women activists of the state. Among the most vocal critics are Angela Rangad, founder of Tur u Rangljuki, a group campaigning for the rights of the marginalised and unorganised workers, and Agnes Kharshiing, president of the Civil Society Women’s Organisation. They called the Bill a violation of women’s rights and an attempt to impose gender discrimination and patriarchal norms in a matrilineal society. They also said the Act, which allows for a provision of testing the ‘Khasiness’ of an individual based on which the KHADC would issue a certificate, smacks of racism with its emphasis on racial bloodlines.

There is no pure race and scientific research shows that all people share the same ancestry, the women said. They were last Monday heckled by a mixed group of members of the Khasi Students’ Union, Federation of Khasi, Jaintia and Garo People and others at a panel discussion on the Bill held by a local television channel.

State Women’s Commission chairperson Theilin Phanbuh and several women activists signed a petition asking the governor not to give his assent to the Bill.

Shylla and the MDCs of the district council are of the view that members of the tribe should bear in mind the experiences of forced assimilation in other parts of the world. The example they cite is of the indigenous tribes of the North Americas who have been so assimilated by the larger population through marriages that they now have to define their indigenousness by the ‘quantum of blood’ test. Although the Khasis are nowhere close to that situation, Shylla and KHADC argue that if inter-marriage continues at this rate, Khasis will soon lose their ‘originality’ in terms of blood and culture. They claim that in such a scenario, even if the Khasi clans and titles exist, the bearers of these will no longer be the original tribes-people.

Having taken such a major step to ‘safeguard’ the tribe, Shylla and the KHADC have, however, failed to come up with any plans to go deeper into the issue, which slices into the very heart of an individual and family, and exposes the hidden secrets of domestic life. The Bill has simply laid the onus of ‘saving’ the tribe on the women of their tribe without even seeking their views and the circumstances influencing their decisions. They have not, however, tried to answer the most natural question that begs an answer: why is it that the women seek life partners outside their community?

Khasi men have failed their women

The question opens a pandora’s box, which the self-appointed custodians of the tribe may not be able to face. A senior and well-respected member of the tribe said a straightforward answer to the question would be: “Because Khasi men have failed them.” The hard fact, the elder said, is that “Many women have no choice but to tie their lives with other men who will at least give them and their children a stable life.”

Several Khasi women who responded to this question gave similar answers: male members of the tribe have a propensity to sow wild oats, for which they leave their family behind and fail to provide for their maintenance and often indulge in ‘unofficial’ polygamy. This has a devastating effect on the women – and by extension their children – ultimately leading to break up of the marriage. The lack of legally binding institutionals of local marriages also means that the marriage remains unmoored and prone to break up easily.

According to the 2011 census, Meghalaya comes second to Mizoram as the state with highest rate of separation and divorce in the country. Early marriages and single motherhood are rampant in the state. Michael Syiem, a well known activist, had campaigned hard for a law to register all marriages, hoping that official registration would bring some semblance of permanence to the wedding and also allow the aggrieved party to claim alimony in case of separation. The government has now created a registry of marriages, but very few have signed up.

This brings the question back to the men who are admittedly prone to leave their partners. Studies have revealed that matrilineal societies face special issues and problems compounded by modernisation and the overwhelmingly patriarchal world, which has devastated the traditional kinship or kur system, the foundation of matrilineal societies. There is no longer any uniformity in the practice of matriliny, with a section taking their lineage from the father’s side. The ancient traditional system of clan exogamy and matrilineal edifice is thus crumbling.

These problems need to be deciphered and solutions sought – not by politicians alone but by experts who are well aware of the complex issues of identity and status facing the three minuscule tribes: Khasi, Garo and Jaintia. It is only the three district councils which are constitutionally empowered to stave this off and prevent total obliteration of the unique matrilineal tribes.

In the petition mentioned above, the signatories pointed out that if the KHADC is serious about saving its tribe from extinction, they should sincerely tackle the larger problems facing the Khasis such as acute landlessness and loss of a common land called raid, which was open for use by all members of the tribe or clan. The land question is more vital to the survival of the tribe rather than who a Khasi woman marries.

Several Khasi people this reporter spoke to said the prime issue is not whether the Bill gets the legal consent or not. What is more pressing for the Khasis – one of the last few remaining matrilineal tribes of the world ­– is whether they can solve the matrimonial incompatibility conundrum highlighted by controversial amendment. After all, if the women shy away from being married to the men of their own tribe, there is little hope for the future of any tribe. It is therefore the men, and the institutions these men run, who need to introspect and provide the solutions to the problem before it is too late.

Linda Chhakchhuak is an independent journalist based in Shillong.