The Uttar Pradesh police's plan to set up cameras that will detect distress on women's faces and alert officers has led to fear of targeted tracking and harassment of interfaith couples.

Saharanpur: Latest among questionable efforts announced by law enforcement to tackle women’s safety is Lucknow police’s plan to set up cameras equipped with artificial intelligence that will automatically take a photo of a woman in distress on the basis of her facial expression, thus pushing police to act.

“The cameras will be able to detect any change in the facial expressions of a woman being subjected to stalking, threats or harassment on the streets, and an alert will be sent to the police control room,” said additional director general of police
(law and order) Prashant Kumar.

This is being done under the Smart City project of the Adityanath-led Bharatiya Janata Party government in the state.

The idea was announced at a workshop, ‘Ashish: Abhay aur Abhyudaya’, conducted at the Lucknow University campus on Wednesday (January 20). The event was attended by women residents of the institution’s hostel, the hostel provost Bhuvneshwari Bhardwaj, the dean of students’ welfare, Poonam Tandon, and Lucknow Police Commissioner D.K. Thakur.

Thakur said at the workshop that about 200 “hotspots” will be identified from across Lucknow on the basis of where women’s movement is the most and from where most complaints are received. As soon as there is noticeable sign of distress in a woman’s expression, the cameras will be activated, he said.

“Before she dials 100 [the national police helpline] or 112 [the UP emergency service], the police will be alerted,” he said.

In addition to questions on whether such a plan is feasible for rapid action at all, activists and lawyers have said that not only is this an infringement on an Indian citizen’s right to privacy, but it can also be used as a tool of surveillance against vulnerable communities.

Also read: Caging Women Is Violence – Not ‘Safety’ or ‘Protection’

Many have pointed out that such a measure will take away women’s right to decide if or when they want to report a crime.

Between 2015 and 2019, crimes against women in the state had increased by over 66% according to a report by the National Crime Records Bureau.  Across India, cases of rape against women belonging to Scheduled Castes communities increased by 37%, and those of assault by 20%.

Uttar Pradesh had recently also been in the news for the brutal gang-rape and murder of a young Dalit woman by four upper caste Thakur men in Hathras.

A few days ago, Madhya Pradesh Chief Minister Shivraj Singh Chouhan had mulled a new system where women will be required to register themselves at the nearest police station when they are going out of home for work using which information the police will then track them for their “safety.”

Mishi Choudhary, legal director at the Software Freedom Law Center, a movement to protect freedom online, wrote in a tweet, “…Stop this nonsense. The entire world is  putting moratoriums but in India, we seem to be not only travelling at top speed in the other direction, the actions are indicating that rule of law is no more than a small bump in the road on our way.” 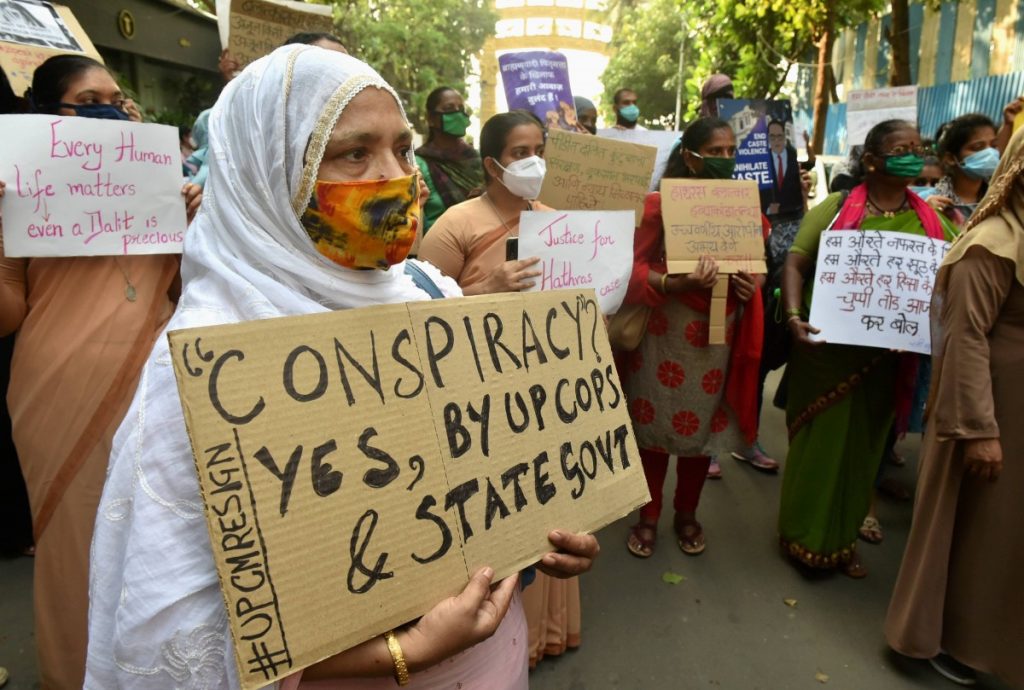 Activists hold placards during a protest against the death of a 19-year-old Dalit woman who was allegedly gang-raped two weeks ago in Hathras (UP), outside Chaitya Bhoomi in Mumbai, Tuesday, Oct. 6, 2020. Photo: PTI/Mitesh Bhuvad

In another tweet, she said, “Where govt reads every face, political dissent is under permanent intimidation. We cannot live our lives outside the range of others’ cameras anymore. Wherever we go and whatever we do in the public sphere we can expect our image to be recorded without our knowledge or consent.”

Anja Kovacs, founder and director of Internet Democracy, an organisation that works around women, technology and surveillance, said in a tweet, “Apart from the tremendous extension of control in public space this entails, it’s based on so many problematic gendered assumptions, including the laughable one that women in distress necessarily look at the police as desirable, or even possible, ‘saviours’ #genderingsurveillance.”

She added, “What women, and most other people, need is more freedom, not more social control. We need a rights framework to deal with problems and challenges, not a protectionist one #genderingsurveillance.”

What women, and most other people, need is more freedom, not more social control. We need a rights framework to deal with problems and challenges, not a protectionist one #genderingsurveillance

Kovacs said that surveillance will only take people’s freedom away, it will put some at greater risk than others.

“I can’t see any advantages here. Using surveillance tools to ensure safety is a really problematic notion. What it actually does is that it increases social control. If people do not fit the norms made by the institution or person doing the surveillance, it will make it easy to harm those people who are already vulnerable in our society,” she said.

She added that this puts interfaith couples at risk in the wake of Uttar Pradesh’s notorious ‘love jihad’ ordinance and the actions taken under it.

She also said that following women all the time to ensure their safety is not feasible and that the police should instead invest in infrastructure and creating a safe space instead. “Changing gender norms and holding culprits accountable for their actions is what will actually work,” she added.

“There are some women who want to stay away from the police. For example, consider sex workers. What will happen if the police begins to track them?” asked Kovacs.

Assessing the reason for a woman’s distress will be difficult for police, she added. “What if she is distressed because somebody informed her that somebody in her family died?” she said.

Anushka Jain, associate counsel with the Internet Freedom Foundation that works on defending online freedom, privacy and innovation, feels that artificial intelligence systems are not the solution to the problem of sexual harassment.

“You can’t just install some technology and say that everything is going to be fine from then. I know, it sounds good because it is fancy technology. But it is also almost impossible to implement this in reality, because the police will not be able to handle the barrage of alerts it will receive once this is in place,” she said.

Jain also questioned some of the rationale behind picking spots in the city.

“On what basis are they going to decide which areas they should put the cameras in? Why certain parts of the city? This will only lead to more surveillance on women. To continuously track women’s gestures is so, so invasive,” she said, adding that the right to privacy covers privacy even in public spaces and should be respected.

“It is a patriarchal concept to want to save women. We don’t know how this data will be stored, who will have access to it, and what if it is some police officer who is harassing a woman?” she said.