No politician or mediaperson will be allowed entry into the village of the gangrape-murder victim until the SIT formed by the UP government completes its probe. Delhi CM Arvind Kejriwal during a protest against the death of a 19-year-old Dalit woman in the Hathras case, at Jantar Mantar in New Delhi, October 2, 2020. Photo: PTI/Arun Sharma

Wearing masks and raising slogans against the UP government, they demanded that chief minister Yogi Adityanath resign, alleging his administration was “shielding” the accused. Most of those at Jantar Mantar, which turned into the first big gathering of protesters in Delhi since the anti-Citizenship Amendment Act (CAA) demonstrations in February-March, said they were outraged over the way the UP police cremated the victim’s body in the dead of the night.

The protest was to be held at India Gate initially but had to be shifted to Jantar Mantar owing to the prohibitory orders in place in the Rajpath area. Delhi police had said a gathering of up to 100 people would be allowed at Jantar Mantar with prior permission.

Police officials repeatedly made public announcements urging protesters to keep their masks on and maintain social distance. Later, some protesters were booked for violating CrPC Section 144 and other COVID-19 restrictions, a senior police official said.

Congress general secretary Priyanka Gandhi Vadra, who had tried to march to Hathras with her brother Rahul Gandhi on Thursday but they were briefly detained by UP police in Greater Noida, attended a separate prayer meeting for the 19-year-old Dalit woman.

She said every woman needs to raise her voice and question the government to seek justice for the “daughter of Hathras”. She added the Congress party will continue to exert pressure on the Adityanath government till justice is delivered in the case.

The woman succumbed at Delhi’s Safdarjung Hospital to the injuries she suffered in the assault by four upper-caste men in her village in Hathras district on September 14. The four have been arrested.

The incident triggered outrage across the country after TV footage showed that the local police cremated the body at night, without the family’s consent. Her family members alleged they were not allowed to bring the body home one last time.

Priyanka Gandhi, who has been at the forefront of the attack on the Uttar Pradesh government, slammed the Hathras administration for cremating her after the sunset. “Our country does not have a tradition where the father, the brother the family of the victim is not allowed to light the pyre,” she said at the prayer meeting organised. 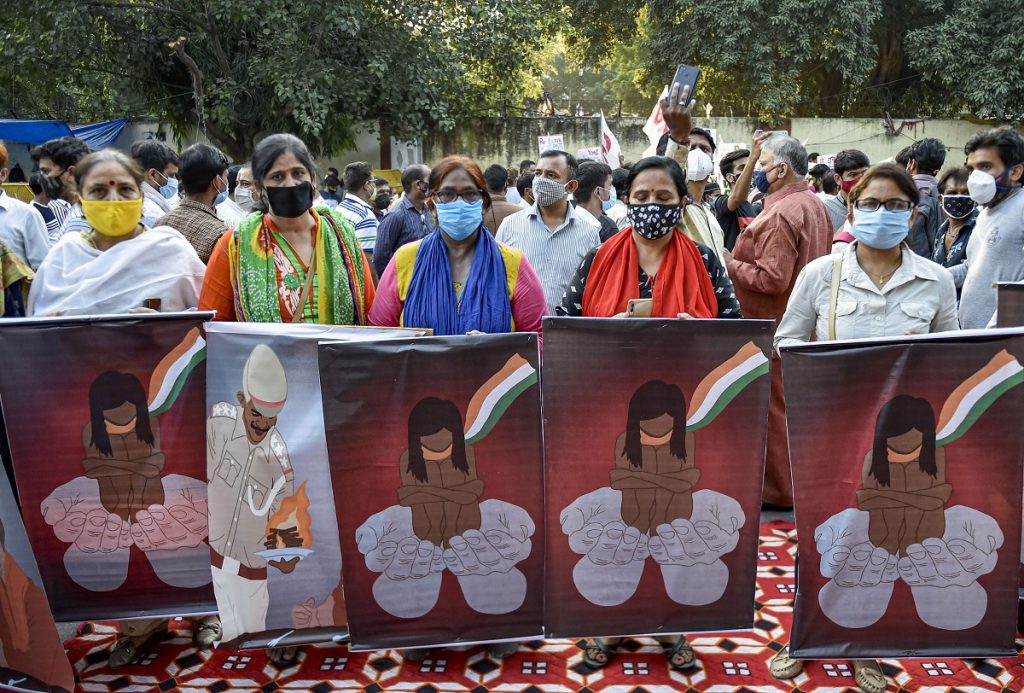 People from various organisations stage a protest against the alleged gang-rape of a 19-year-old Dalit woman in Uttar Pradesh’s Hathras, at Jantar Mantar in New Delhi, October 2, 2020. Photo: PTI/Ravi Choudhary

Later in the evening, civil society activists, students, women and political leaders gathered at Jantar Mantar against the incident and the UP government’s response to it.

Addressing the protestors, Kejriwal said there should be “no politics” on the issue and the accused must get the strictest punishment.

“The entire country wants that the accused get the strictest punishment. Few people feel attempts are being made to shield the accused. That should not happen… The family needs help and sympathy. The family should not be troubled,” he said.

Bhasker said people from different groups have gathered at Jantar Mantar, which shows how enraged people are. “It is time we start fighting against the rape epidemic.”

Lawyer-activist Prashant Bhushan said the UP police have surrounded the village, are not allowing opposition leaders and media persons to enter it and have also taken away the mobile phones of the family members of the victim. “What is happening in UP is goonda raj,” he alleged.

“The silence of the Central government and the top leadership of the BJP on such a heinous crime and the UP government’s response thereafter speaks volumes about the authoritarian and anti-democratic “chehra“, “chaal“, “charitra” and “chintan” of the ruling party,” Yechury added.

In view of the protest, the Delhi police had beefed up security at Jantar Mantar.

Senior police officers and paramilitary personnel were deployed to manage the crowd and the site has been barricaded to restrict the movement of people, an official said.

The entry and exit gates of a few Delhi Metro stations that lead to Jantar Mantar were closed for a few hours.

CPI(M) leader Brinda Karat said the lawlessness in UP is “a caste code in operation, not the Constitution of India”.

Bhim Army’s Azad demanded that a fast-track court be set up to hear the case daily. “The culprits should be punished as soon as possible so that others get scared before committing such crimes. We will go to Hathras and till the time the matter doesn’t come to Delhi, there is no chance of getting justice,” he said.

Politicians or mediapersons won’t be allowed to enter the village

No politician or mediaperson will be allowed entry into the village of the gangrape-murder victim in Hathras until the Special Investigation Team (SIT) formed by the Uttar Pradesh government completes its probe, Hathras additional superintendent of police Prakash Kumar told PTI on Friday.

The Hathras administration had Thursday clamped prohibitory orders under CrPC Section 144, which bars assembly of more than four people.

Political parties had staged protests to demand justice for the 19-year-old Dalit woman, who died earlier this week, a fortnight after she was gang raped allegedly by Thakur men. The police and administration’s actions in the case have been severely criticised, especially after the police cremated the woman’s body in the middle of the night against her family’s wishes.

Amid countrywide outrage over the case, UP chief minister Yogi Adityanath had on Wednesday formed a three-member SIT, which was instructed to submit its report by October 14, according to officials.

Meanwhile, the woman’s family has alleged that their phones have been confiscated and their outdoor movements confined. “My family members are being threatened. My uncle asked me to try to reach out to the media. My uncle was assaulted by DM sahib yesterday, after which he fell unconscious,” a young relative alleged.

The district magistrate has been caught on video asking the woman’s family to soften their stance and change their statement. “Half of the media people have left today, the other half will leave by tomorrow. Only we will stand with you. It is up to you whether you want to change your statement or not,” district magistrate Praveen Laxkar is heard saying.

The developments came as Friday saw Aam Aadmi Party (AAP) and Samajwadi Party (SP) workers staging protests in Hathras, while a two-member delegation of the Trinamool Congress (TMC) was allegedly manhandled in a ruckus at the village’s border.

Some media personnel also alleged manhandling by the administration and police officials at the site, and Seema Kushwaha, who served as Nirbhaya’s family’s lawyer, alleged that she was not allowed to meet the family.

Five policemen, including the superintendent of police, from the Uttar Pradesh police have been suspended by the government. The SIT had called for their suspension, alleging that they have mismanaged the case. The team also called for lie-detector tests on those arrested and the victim’s family.

Also read: What the UP Police Hopes to Gain With Its ‘No Evidence of Rape’ Claim in Hathras Case

Uttar Pradesh minister Ajeet Singh Pal on Friday described the gang-rape and murder as “a small issue”, asserting that the Dalit teen was not raped.

“Doctors have already made it clear that the Hathras woman was not raped,” Pal, the UP minister of state for slectronics and information technology. The police and members of the Yogi Adityanath government have been trying to claim that the woman was not raped, just because no sperm was found on the body. However, a number of legal experts have reiterated that sperm does not need to be found for the offence of rape to be made out, and that the medical report makes brutal sexual violence and rape clear.

“We can do nothing if the opposition is attacking (the government). They have no issue and are raking up such small issues intermittently. They are just raising issues and doing nothing in the public interest,” the minister told reporters when asked about the opposition’s attack against the government over the issue.

When reporters countered him, according to PTI, Pal said that the matter was being investigated and all findings would be made public.