Uttar Pradesh: Out for Scooty Ride With Friends, Dalit Schoolgirl Gang-Raped by 6

Police have arrested two out of the six accused within a day of the registration of the FIR in Bareilly. 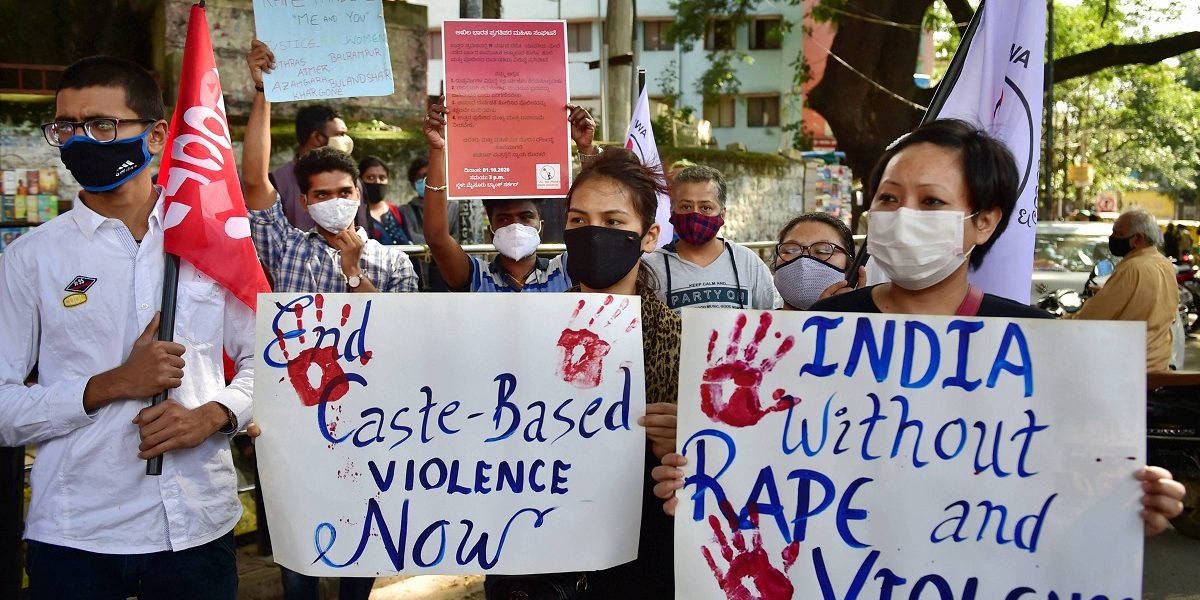 Representative image of a protest against the gangrape and murder of a Dalit teenage at UP's Hathras. Photo: PTI/Shailendra Bhojak

New Delhi: A Dalit teenager was dragged from a scooty she was riding, assaulted and gang-raped by six men on May 31, in Uttar Pradesh’s Bareilly. Two of the six accused have been arrested.

The 19-year-old, a resident of the Bhagwanpur Dhimri village, had been riding with two of her school friends when the men intercepted them. She informed her family on Saturday, June 5.

Her elder brother told The Wire that she was deep in shock and has suffered injuries. He also said that the accused had threatened her with death if she complained to the police.

Police said that the victim also did not want to “embarrass her family.”

The FIR was filed on June 5 when the young woman’s elder brother and her school friends took her to the local police station in Izzatnagar and lodged a complaint. In her complaint, the victim said, “I was riding a scooty with one of my school friends while my other friend was on a different bike. When we were passing through the village, a few young men stopped us.”

She added that three of them dragged her away from the scooty while the other three accused started assaulting her friends. One of her friends managed to escape from, but her other friend was seriously injured and fell unconscious.

One of the victim’s friends, who was also assaulted, told The Wire, “They snatched our phones and started thrashing me. We couldn’t understand what was happening and then I fell unconscious. I couldn’t do anything for my friend.”

Further, she said, “I still remember their names. They were calling each other by their names, ‘Dharmendra’, ‘Anuj’, ‘Vishal’, ‘Neeraj’, ‘Amit’ and ‘Naresh’. ‘Naresh’ was the most aggressive of them all and probably leading the gang. I want strict action against the accused.”

Bareilly SSP Rohit Singh Sajwan sent a team with the young woman to the village to trace the absconding accused.

The SSP confirmed to The Wire that an FIR has been filed under Section 376D (gang-rape) and the The Scheduled Castes and Scheduled Tribes (Prevention of Atrocities) Act, 1989, has also been invoked against the six men.

“We recorded her statement and inspected the crime scene to get more information. Two of the accused have already been traced, and the others will be caught soon too,” he told The Wire.

Two accused, Vishal Patel (22) and Anuj Patel (23) were arrested on Sunday, within 24 hours of the registration of the FIR.

One of them was shot on the leg before his arrest, the SSP said.

The victim had been sent for a medical examination and her statement, under CrPC Section 164, would be recorded in court, the SSP added.