The Story of Afghanistan's Female Football Players, One Year Into Taliban Rule

'It's hard when I turn on the TV and see the sports channels or I see a soccer match.' 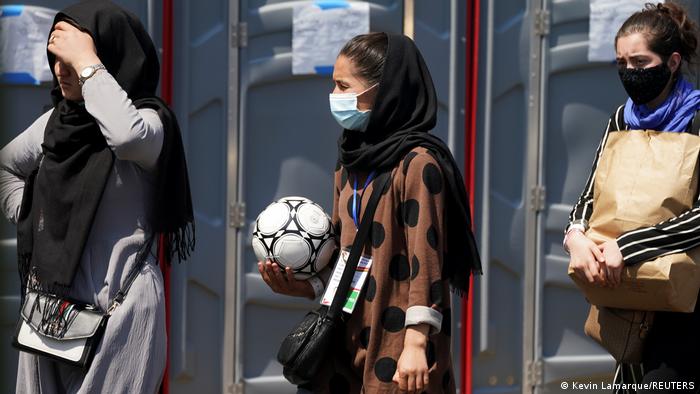 One year since the return of the Taliban, Afghan female athletes still face an uncertain future. Photo: Reuters

“I knew if I stayed, the Taliban would find me, beat me and burn me alive. So, I thought if I got killed by a bullet or I was crushed at the airport while waiting to escape the country, it would be an easier death.”

Recalling how she stood among more than 10,000 people desperately waiting, hoping and praying to pass through one of three gates and get inside Kabul airport in August 2021, Nilofar’s story is all too common.

Eleven months on, Nilofar remembers with terrifying accuracy the days spent without sleep, hearing the cries of mothers around her who could do little but watch their children suffocate in the mass of people frantically attempting to get on one of the few flights out of the country.

Nilofar’s only crime had been to have the audacity to participate in a form of sporting activity and encourage other girls to do the same. But it led the Taliban to hunt her down.

“Every human should be able to do these activities,” Nilofar told DW. “It is a human right, but the Taliban do not accept women as human.

“They make the girls believe that playing sport is a crime for women because the philosophy that the Taliban have is that women are made for the home and nothing else.”

Lucky escape with a tragic twist

Nilofar eventually got inside the airport perimeter with the help of an American soldier, but refused to leave until she could ensure that 16 footballers on the local team she coached — who were still on the other side of the gate — would make it on to a plane, too.

In the end, she was only able to bring eight other girls with her. Days after reaching Doha, Qatar, Nilofar learned that the American soldier who helped them had been killed in the suicide bombing of the airport on August 26, 2021.

Although Nilofar was one of the lucky ones to reach safety in a third country, there has been a significant mental toll for those who escaped. 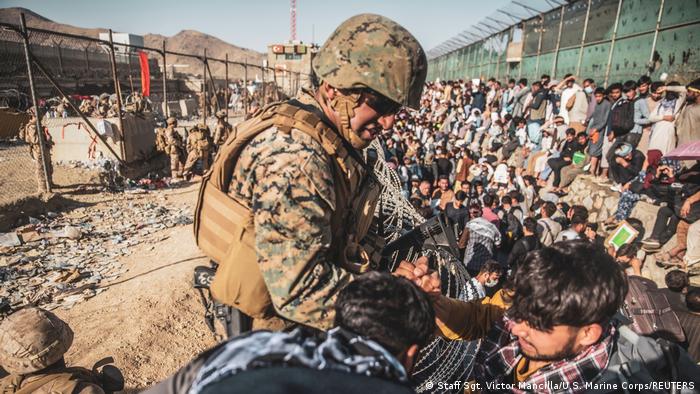 In August 2021, the Kabul airport was the scene of chaos when the Taliban regained control of Afghanistan. Photo: Reuters

Young female Afghan athletes are scattered across the globe, still too scared to even contemplate playing sport again and constantly worried about their families who remain under threat in Afghanistan, simply because their daughters participated in a sporting activity during the previous 20 years.

“It’s hard when I turn on the TV and see the sports channels or I see a soccer match,” Nilofar explained. “I think back to the girls who I worked with, who I encouraged to play sports, whose activities I facilitated with equipment.

“I think back to the days when we worked hard to encourage women to stand up for their rights.

‘We lost 20 years of achievements and efforts’

Afghan national volleyball player Muzhgan Sadat paints an almost identical picture. Without any opportunities to pursue her passion for sport, constant uncertainty and worry for her teammates still trapped in Afghanistan, hers is a life stuck in limbo.

Sadat had already been forced to leave her home country in 2019 due to Taliban threats over her role as captain of the national volleyball team.

Watching the scenes in Kabul unfolding last August from Kazakhstan, where she was attending university, Sadat saw years of progress disappear overnight.

“We lost our 20 years of achievements and efforts in Afghanistan to build our team,” she told DW. “We worked so hard for that, gathering female participants, encouraging families and girls to participate in the sports community in Afghanistan.

“Then suddenly you wake up one day and everything is gone. It’s like a bad dream.”

Sadat remembered how, in 2017, female athletes across the country received written warnings from the Taliban to cease all sporting activities or face serious consequences.

Despite the threats, Sadat and her volleyball teammates put their desire to enjoy a simple human right and to play sport ahead of their own safety.

“[Afghanistan] is a country where, as a woman, you can assume there will be attacks from anywhere,” Sadat said. “When you’re doing any activities, you cannot say you are safe.

“All of us who were going to training, either with the Olympic committee or at private clubs, accepted the risks, knowing something could happen to us — maybe the terrorists or others would attack or kill us.” 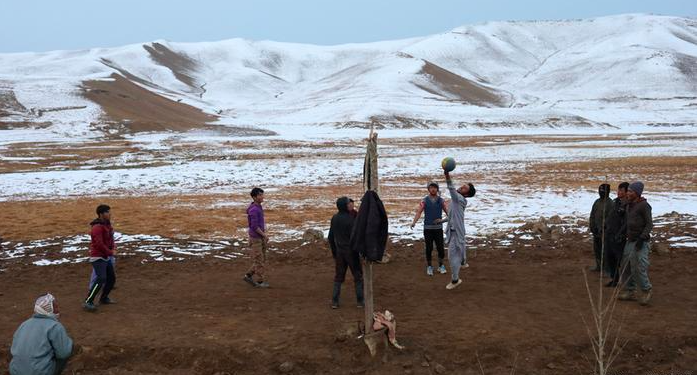 Afghan boys are playing volleyball — an activity which is now frowned upon for girls. Photo: Reuters

Learning to ride a bike

Over the past year, the situation for female athletes who remained in Kabul has become far bleaker, with many trapped inside their homes knowing that just stepping outside could be costly.

Sadat and Nilofar, alongside many nonprofit organizations, continue to work to find escape routes for those still in the country, but progress through official channels is slow and unofficial routes into neighboring countries such as Pakistan are risky.

Despite the pain, Nilofar and some of the female footballers she used to train in Afghanistan have been able to carve out one moment of happiness after reaching their current location.

“I was very eager to learn how to ride a bike,” said Nilofar. “It sounds childish because children learn to ride bikes when they are 3 or 4 years old. But as a woman in Afghanistan, you were not allowed to ride a bicycle around the city, even when the Taliban were not in charge.

“When we arrived [here], I learned to ride a bike along with some of the other girls. It was such a great experience and I wish every girl would be able to do that.”

Sadat, too, continues to hope and dream of a day when she and her teammates will be together again and able to compete in the sport they love.

“We haven’t lost our hope that one day all of [her volleyball teammates] can get out of Afghanistan and can start playing again in peace,” she said. “With no one interrupting them, no one stopping their activities or preventing them from achieving their dreams.”