The Country Where Having a Miscarriage Can Land You in Prison

El Salvador shows what happens when countries criminalise abortion: women end up behind bars, and sexual violence is institutionalised. 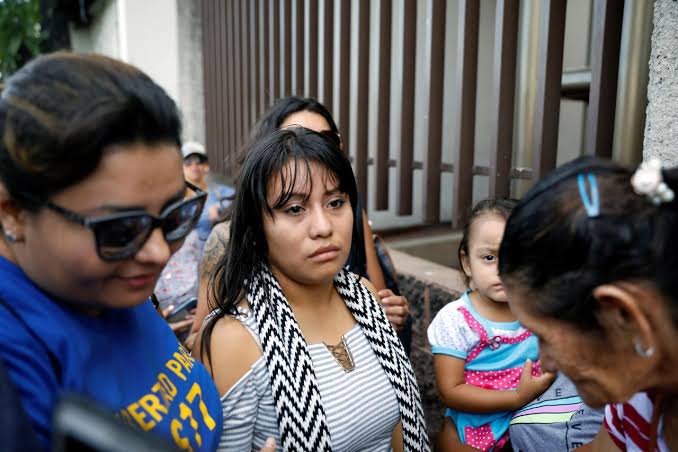 Evelyn Hernandez, who was sentenced to 30 years in prison for a suspected abortion, arrives for a hearing in Ciudad Delgado, El Salvador, August 15, 2019. Photo: Reuters/Jose Cabezas

One recent night in San Salvador, I was driving through some of the more notorious gang neighbourhoods in the area with a photojournalist friend, who was scouting for homicides. As we turned down a street in the municipality of Ilopango, my friend pointed out a looming structure — the Ilopango women’s prison — where, it turns out, a number of women convicted of abortion-related crimes are incarcerated.

El Salvador has some of the most draconian abortion laws on the planet. Since 1998, the procedure has been totally banned — including in cases of rape and incest, or when the mother’s life is in danger. Even having a miscarriage can land you behind bars. The charge is often “aggravated homicide,” which can carry a sentence of up to 50 years (ironic considering San Salvador is among the world’s murder capitals — you’d think the police would have enough actual homicides to deal with).

A new documentary titled En Deuda con Todas — produced by the Galician organisation Agareso — offers a striking glimpse at the war on reproductive and human rights in El Salvador. One protagonist is Teodora Vásquez, released from prison in 2018 after her 30-year sentence was commuted to ten. Her crime? “Killing” her newborn by fainting during labor. She was awaiting the arrival of an ambulance and awoke to find her baby dead.

Then there’s 26-year-old Sara Rogel, a chipper, ponytailed inmate at a prison in the Salvadoran department of Sonsonate, who is six years and four months into her own three-decade sentence for “aggravated homicide” — this one for slipping and falling in her home while pregnant. Requiring urgent medical attention, Rogel recounts how the police showed up and attempted to handcuff her before the surgeon was even done.

In fact, medics are frequently the ones to alert Salvadoran law enforcement to obstetrical complications potentially qualifying as prosecutable offenses. Failure to do so can mean violating the Salvadoran constitution — Article 1 of the document recognises human life as beginning from the very moment of conception.

Another interviewee in the film is Xiomara Argueta, a Salvadoran OBGYN who suffered sudden complications during her own pregnancy and knew that her baby wouldn’t survive — and that she wouldn’t either, if the medical personnel attending to her abided by Salvadoran law. But she had an out: “In my country,” Argueta humbly acknowledges, “women with money don’t go to jail.”

As in the United States, where the wealthy are able to skirt abortion restrictions, Salvadoran women with access to the proper resources can either have the procedure performed at private clinics in the country, travel abroad to abort, or obtain abortion pills. According to figures I received from a Salvadoran feminist activist, an in-country abortion can cost up to $1,200, and pills are similarly expensive — plenty of families survive on $200 a month or less. 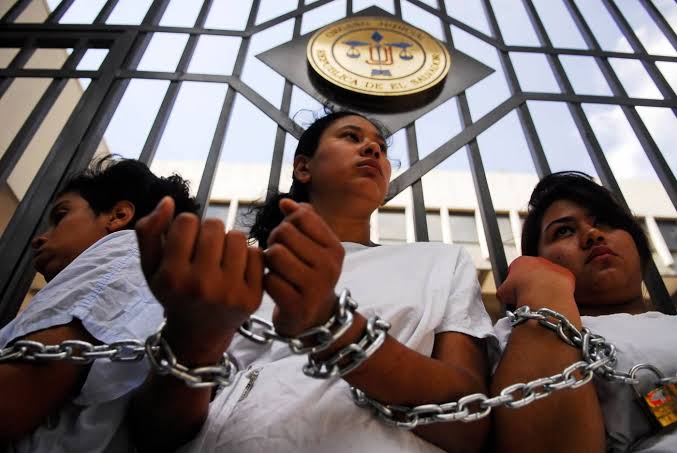 Women stand chained together outside the Supreme Court in San Salvador, May 2013, during a protest in support of a 22-year-old woman identified as Beatriz who requested an abortion because she suffers from lupus. Photo: Reuters/Ulises Rodriguez

What we end up with, then, is the criminalisation and repression of poor women and girls — with cases of nine-year-olds carrying their pregnancies to term following rape by a family member. The effective institutionalisation of sexual violence against women — and the rape stigma that, as in any patriarchal society, hits women rather than men — also means that rapists frequently enjoy impunity for their crimes while women are punished for, you know, miscarrying. For many poor women who are not keen on reproduction, the only options are unsafe (i.e. potentially lethal) abortions or suicide. Perhaps the Salvadoran state can begin prosecuting female corpses for aggravated homicide of embryos.

The state’s crusade against reproductive rights has plenty of institutional support. The Catholic Church — among other powerful religious forces in El Salvador — vouches for the morality of the barbaric campaign. Politicians, too, are ready with anti-abortion sound bites — like Congresswoman Karla Hernández of the right-wing ARENA party, who swears that women’s bodies are “programmed like computers to give birth” and that cancer and other maladies will proliferate if abortion is permitted. The left-leaning FMLN has also been bad on the issue, doing nothing in its ten years in power (2009–2019) to reverse the abortion ban.

In En Deuda con Todas, Hernández asserts that “the trauma of rape can’t be resolved with the trauma of an abortion.” In my own experience, I’d say abortion ranks among the most relief-filled decisions of my entire life — though I’d imagine spending decades in prison for either voluntarily or involuntarily dispensing with a clump of cells in my womb would be pretty traumatic.

There have been a few relative victories on the abortion rights front in El Salvador, as when 21-year-old Evelyn Hernández was acquitted last year of “aggravated homicide” for delivering a stillborn baby after being raped by a gang member. Granted, this was after she had spent nearly three years in prison.

As Salvadoran human rights defender Morena Herrera notes, the criminalisation of women continues to amount to “state violence.” Which brings us back to the previous point: in such a violent state — where homicides, forced disappearances, extrajudicial assassinations by state security forces, and ongoing impunity for slaughter conducted during El Salvador’s brutal civil war of 1980–1992 are a daily reality — this sort of ultra-policing of women’s bodies comes off as ludicrous and illogical.

Then again, perhaps distraction is precisely the point. If the patriarchal state has no interest in protecting its citizens from the moment of conception, it might as well blame poor women for the oversight.

But that, in itself, is one colossal crime.

Belén Fernández is the author of The Imperial Messenger: Thomas Friedman at Work, Marytrs Never Die: Travels through South Lebanon, and, most recently, Exile: Rejecting America and Finding the World. She is a contributing editor at Jacobin.

This articles was published on Jacobin. Read the original here.