Several on Twitter pointed to the public humiliation of Muslim girls and women who had to remove articles of clothing on the street. Others noted how a section of students were missing classes. 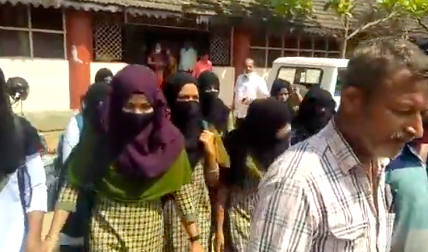 Students in Shimoga walk away from their school after refusing to take off the hijab. Photo: Video screengrab/Twitter/@NikhilaHenry

New Delhi: As high schools reopened in Karnataka on Monday, February 15, tweets from across the state have surfaced, showing students and teachers allegedly being forced to remove their burqas and hijabs.

All educational institutions in Karnataka had been shut since last Wednesday, February 9, after a pre-university college’s decision to bar girl students in hijabs from entering the classroom led to protests and counter-agitations across the state, and later, India.

The Karnataka high court, in its interim order pending consideration of all petitions related to the hijab row, had restrained all students from wearing saffron shawls, scarves, hijab and any religious flag within the classroom.

On Monday, high schools were reopened amidst Section 144 of the Criminal Procedure Code imposed in areas of Udupi, Dakshina Kannada and Bengaluru. In places, enforcement of this order led to scenes that were captured on video.

The news agency ANI has tweeted a video purportedly showing a teacher asking students to remove their hijab before entering the school in Mandya town of Mandya district. An altercation is seen, in which, according to ANI, a parent is heard requesting the teacher to allow students into the classroom so that they can take their hijab off after that. “But they are not allowing entry with hijab,” the parent purportedly says.

The discussion takes place in Kannada and the translation is ANI’s.

#WATCH | K'taka: Argument b/w parents & a teacher outside Rotary School in Mandya as she asked students to take off hijab before entering campus

A parent says,"Requesting to allow students in classroom, hijab can be taken off after that but they're not allowing entry with hijab" pic.twitter.com/0VS57tpAw0

Journalists Deepak Bopanna also tweeted videos from the same Mandya school, showing how teachers and staff too were forced to take off their hijabs before entering the school.

Journalist Imran Khan tweeted that Mandya district administration had issued instructions to schools to not allow teachers in with the hijab, mandating that the hijab must be removed at the gate itself.

The videos show women, purportedly members of staff, complying with the order.

Even teachers & other staff being asked to remove #Hijab before entering campus at a school in Mandya. Instructions have been given to most schools in the district to follow this norm. pic.twitter.com/B6FC84quBn

Several on Twitter pointed to the public humiliation that Muslim girls and women were being made to go through.

Someone should show these visuals to the judges. Is this what you wanted? Asking women to remove the hijab at the gates? https://t.co/1VVE590Ijc

IT WAS NEVER ABOUT THE UNIFORM: Muslim teachers and staff being publicly humiliated to remove their #hijab before entering school campus.#KarnatakaHijabRow pic.twitter.com/T99Xp5VHTK

The humiliation young girls and women teachers from Muslim community are being subjected to while forcing them to remove their hijabs & abayas in full public view amid camera glare is deeply disturbing. The schools won't lose anything if hijabs are removed inside premises.

Journalist Nikhila Henry tweeted a video from Shimoga noting that students left the campus after refusing to take off their hijab. Henry observed how the Karnataka high court order against religious clothing has led to Muslim students thus missing classes.

Students of a Shimoga school refuse to remove hijab and leave the campus. The Karnataka high court order on ban on religious clothing has led to Muslim students missing out on classes, the first day the schools reopened after closure. ⁦@TheQuint⁩ pic.twitter.com/a6s31PpbWg

Chief minister Basavaraj Bommai had noted on Sunday that the decision regarding reopening of pre-university and degree colleges will be taken after assessing the situation.

In Udupi, thhsildar Pradeep Kurudekar, who visited a few schools, told the news agency PTI that Muslim students were abiding by the high court’s interim order by removing hijabs before entering classes.