Shaheen Bagh: What Irks the Saint?

The Shaheen Bagh protest has rattled the Sangh parivar not merely by its persistence but by the number of women at its heart. 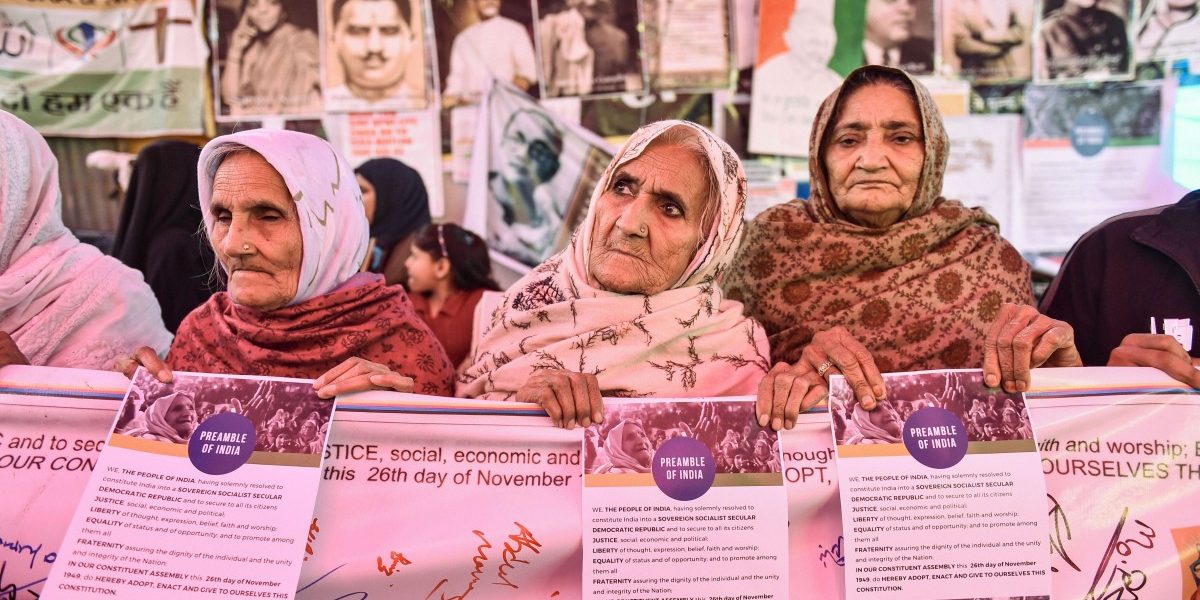 Let’s have no qualms regarding the fact that India is a patriarchal state. A brutal patriarchy, to be precise.

Like much of the social and political muck in the Indian society, patriarchy runs in bloodlines. It occupies the four walls of institutions of Indian democracy. It literally rules Indian streets, by lanes and homes. It brazenly manifests itself even in matters of justice and law. From sexist remarks of Prime Minister Narendra Modi (remember, Rs 50 crore-wali girlfriend?) to the regular defamation of women by sitting ministers and Members of Parliament, the hydra heads of misogyny take birth in many voices.

It is hence no surprise that the sitting chief minister of the most populous state of the country, the “saint” Yogi Adityanath, has mocked the protestors of Shaheen Bagh in the most sexist manner. He had asked, “Where are the men? Why were the men of Shaheen Bagh sleeping under the quilt while women were pushed forward?” If making vile statements against the minority community of the country and threatening them with dire consequences is an acceptable norm, raising patriarchal fingers on such protests would be even more acceptable to the gullible, mesmerised masses, since patriarchy resides deeper in our social psyche than secularism or pluralism.

In fact, if there is anything which can give competition to caste in its run for attaining the numero uno position in the hierarchy of India’s social horridness, it is patriarchy. If Dalits are worse off in the country on many socio-economic parameters, the cohort of Dalit women are marginalised even within that. To validate my statement, in 2017-18, 84% of women in India had an institutional delivery, but only 11% of Schedule Caste women had one in the same time frame.

What Adityanath has said in his conclusions on the Shaheen Bagh protests is not merely his attempt at inducing malice towards a group of Muslims protesting against an unconstitutional act of the government. Of course he’s angry at this newfound audacity of Muslims across the country, but a large part of the wrath is against women in particular.

The hideous meaning in Adityanath’s questioning the absence of men in these protests is so revealing. How can women protest on their own? How can they even imagine their existence protesting on a street without their assumed saviours, the men of their ilk? If anything, the Shaheen Bagh protest has raffled the Sangh parivar not merely by its persistence but by the lead and number of women which are at the heart of this protest.

The distaste for women in general and for their rights in particular runs deep in right-wing philosophy; whether it’s the Taliban or the Sangh parivar, the disregard for women and the disquiet induced by women of stature is incalculable. I remember, the Taliban had once threatened the feminist Pakistani author, late Fahmida Riaz, with death by the bullet for her bold writing. It is learnt that Fahmida appa, in her intrepid style, had said that if they shoot her with a bullet, they should ensure that it goes through her throat because she will keep speaking the truth till the end!

The history of protests across the globe reveals that bigots are most fearful of women’s protests. They expect “appropriate” gender behaviour, according to the societal norms they construct, and when the women deviate from this behavior, they are dealt with an iron fist. A classical case is the resistance offered by the women of Chile. After the takeover by Augusto Pinochet as the dictator of Chile, the women formed the Association of Relatives of the Detained and Disappeared (Agrupacion de Famiiiares de Detenidos-Desaparacidos). This was similar to the Association of the Parents of Disappeared Persons in Kashmir (an organisation also formed by a woman). The Chilean association met with brutal assault by the regime but finally succeeded in becoming a rallying point of protests against Pinochet.

The women’s protests against Apartheid in South Africa also had a similar history. The stiff opposition of the women to the Pass Laws of the South African regime in 1956 happened even when the men had succumbed to the laws. The women resisted the racial law with the slogan, “Now you have touched the women. You have struck a rock. You have dislodged a boulder. You will be crushed.” These South African women protests were even criticised by black men who found it inappropriate for women to lead the anti-Apartheid struggle in the country.

What the protest means

The history of all women-led protests thus tells a story which has a common thread. Political cultures are manufactured from protests on the street. Political cultures in turn influence social cultures. Irrespective of the outcome of any protest, it is also conceived as a threat to established patterns of peoples’ behaviour.

Shaheen Bagh is thus not only a protest against the state’s harrying of the minorities, it is also an irritant to those who stand against women in general. Adityanath’s comments reveal this apprehension. He is not merely worried about a few thousand women blocking a road in Delhi against a biased citizenship law; he is worried at the confidence and courage this protest has given to its female protestors.

Watch: ‘Sambit Patra Should Come to Shaheen Bagh, I Will Pay Him Rs 5,000’

Through such protests, the powerless show their means, ability and mettle to communicate with the most powerful of the land. Imagine the havoc such communication can cause in a society which survives on patriarchy? The friar chief minister also realises the potential infectivity of such a female-dominant protest. What if women of his faith catch the ‘disease’?

The women of Shaheen Bagh, irrespective of the outcome of their protest, have definitely opened the veins of India’s patriarchal order. Howsoever tiny this vein may be and however little it may bleed the country white, in the imagination of people like Adityanath, it needs to be urgently stitched. We shouldn’t therefore be confused at the targeting of this protest by the most extremists of the lot.

The Shaheen Bagh protest shall be remembered in history not for what it achieved (if anything) but for who these brave women were. It shall be remembered for nonconformity rather than for simple dissent. In the words of Virginia Woolf, “The history of men’s opposition to women’s emancipation is more interesting perhaps than the story of that emancipation itself.” Shaheen Bagh shall be part of that story.

Shah Alam Khan is a professor in the Department of Orthopaedics, AIIMS, New Delhi.