Protests resumed at the temple shrine after its doors were thrown open on Monday for a special two-day puja. Unprecedented security has been deployed at the temple in the light of protests by right wing Hindu groups.

New Delhi: After the Ayyappa temple in Sabarimala opened its doors on Monday for a two-day special puja, protests by Hindu groups opposing the entry of women aged between 10 and 50 years resumed. A woman reached the 18 steps at the hilltop shrine on Tuesday morning, where she was heckled and hassled about her age, according to Hindustan Times.

The woman was identified as Lalitha and claimed to be 52 years old. But protestors accused her of lying and forced her to retreat to a police camp. When she showed her Aadhaar card to prove that she was over 50 years of age, protesters apologised and led her to the temple for darshan, according to Hindustan Times. A cameraperson of a local television channel was injured in the protest.

On Monday, there was unprecedented security over apprehension of protests by those opposing the Supreme Court order allowing women of all age groups into the shrine.

Though no girl or woman in the age group of 10-50 years was spotted at the temple on Monday, police said a 30-year-old woman had reached the base camp at Pamba along with her husband and two kids.

Sabarimala virtually turned into a fortress with hundreds of police personnel, including armed commandos, dotting the place where surveillance cameras and mobile phone jammers were installed. On Tuesday, the “Sree Chitira Atta Thirunal” puja will be performed to mark the birth anniversary of the last king of the princely state of Travancore, Chithira Thirunal Balarama Varma.

Sabarimala virtually turned into a fortress with hundreds of police personnel, including armed commandos, dotting the place where surveillance cameras and mobile phone jammers were installed.

On Monday, TV channels aired a clip of BJP Kerala state unit president P.S. Sreedharan Pillai admitting that the temple’s head priest had called him before threatening to shut the temple’s doors as women of menstruating age neared the shrine.

In the video, he said, “Sabarimala is a golden opportunity. It is an issue. Settling the Sabarimala issue in a straight line is not possible. We put forward an agenda and everyone else surrendered to it, leaving only us and our enemies, the government and its parties.”

Pillai claimed that the BJP had planned the protests when the temple was opened last month. Several people young female devotees and women journalists were attacked, hassled and their vehicles damaged by violent protestors as they tried to enter the temple.

Security at Sabarimala and nearby places was stepped up following violent protests by Hindu groups and mainstream political parties like the Congress and the BJP against the Kerala government’s decision to enforce the Supreme Court order lifting the ban on girls and women of menstruating age from entering the temple. 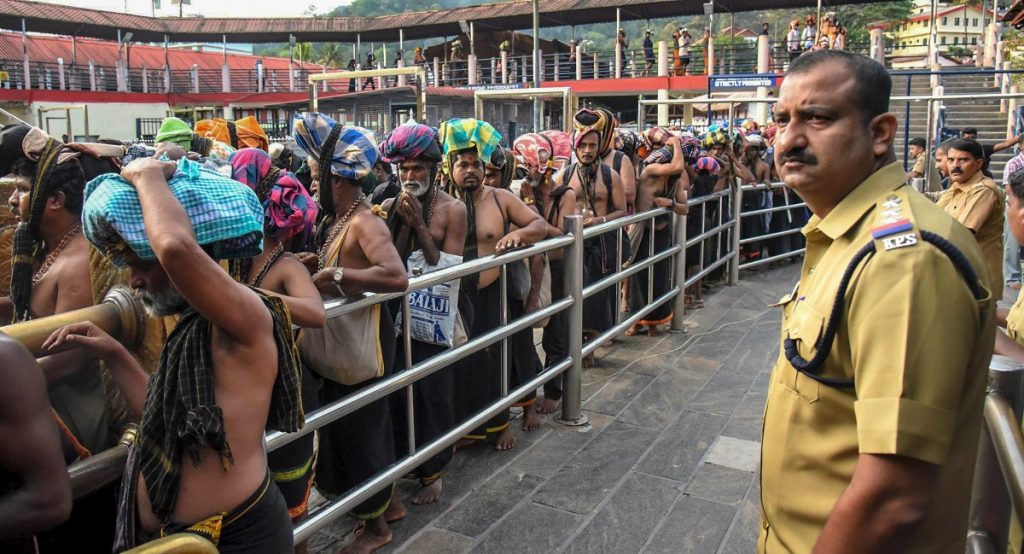 High security has been provided at the temple in the light of possible protests from right wing groups. Credit: PTI

Frequent checking and frisking by police did not go down well with devotees and right wing groups which protested at several places. TV channels showed heated exchanges between devotees and policemen over frisking.

Devotees complained of lack of amenities at the base camps that were damaged in the unprecedented floods in August.

Even journalists were not allowed to leave the Nilakal base camp for Pamba on way to the temple in the morning but the restriction was lifted later in the day.

Meanwhile, the Kerala high court said on Monday pilgrims should not be harassment under the guise of implementing the Supreme Court judgment.

“You can’t cause hardships to pilgrims,” the court said while hearing a petition seeking its direction to the government not to interfere with day-to-day affairs of the shrine.

Police and civil administration are on a high alert, officials said, adding prohibitory orders under section 144 CrPC were in force around the temple and will continue to be in place till Tuesday night when the doors of the shrine will close.

Around 2,300 security personnel, including a 20-member commando team and 100 women, have been deployed in Sabarimala and adjoining areas. 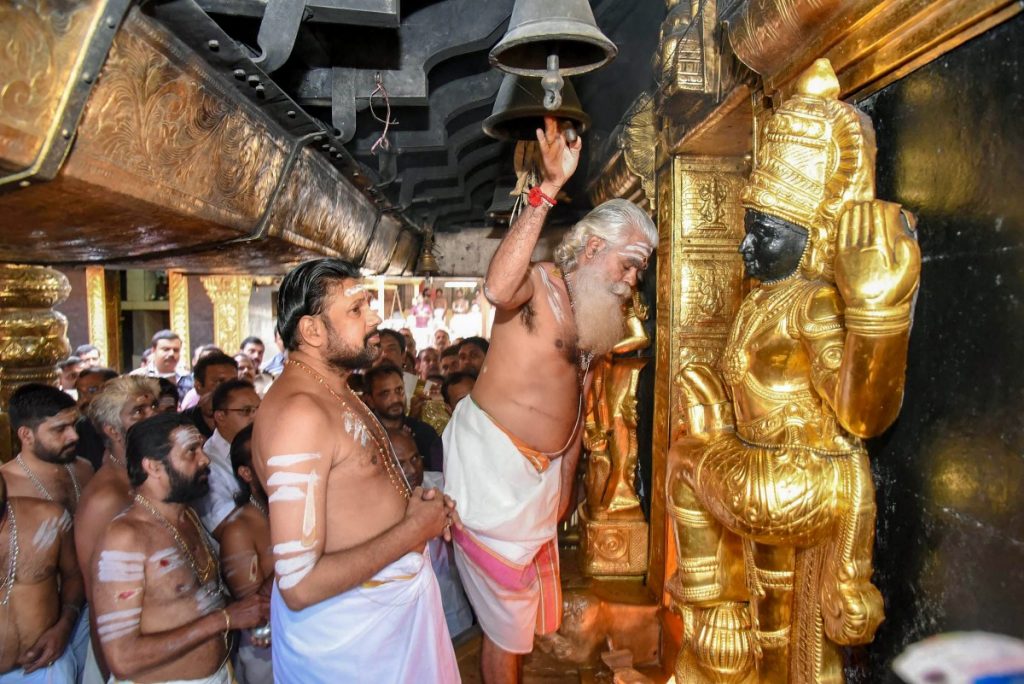 The Ayyappa deity inside the Sabarimala temple. Credit: PTI

According to official sources, police has prepared a dossier of members of Hindu right wing groups who are likely to visit the shrine to take part in the agitation against the Kerala government’s decision not to file a review petition against the apex court order.

At least 15 women police personnel aged 50 years or more have been deployed at the ‘Sannidhanam’, officials said.

When asked about why only women personnel over 50 years of age were deployed inside the temple, inspector general of police M.R. Ajith Kumar said women staff of “eligible” age from various departments have been deployed at the shrine for quite some time.

He also rejected allegations that devotees had to face hardships due to the restrictions imposed by police.

“Here, devotees can come and have darshan. There are no restrictions. Police has arranged adequate security for all devotees,” Kumar said.

The doors of Sabarimala had opened for six days on October 17 for the first time since the Supreme Court allowed women of menstruating age to enter the shrine but none could enter the temple amid a welter of protests and violent clashes.

Valiant attempts by around a dozen women, including activists and journalists in the 10-50 years age group, to script history came to nought as frenzied devotees of Lord Ayyappa heckled and hassled them, forcing them to retreat.

Both the Congress, the main opposition party in Kerala, and the BJP, which is desperately seeking to expand its footprint in the state, have lent support to the agitation against the Supreme Court verdict.