As reports of sexual violence against underage girls are reported at disconcerting frequency, Das Rupay's fictional protagonist Sarita's story is more resonant than ever. 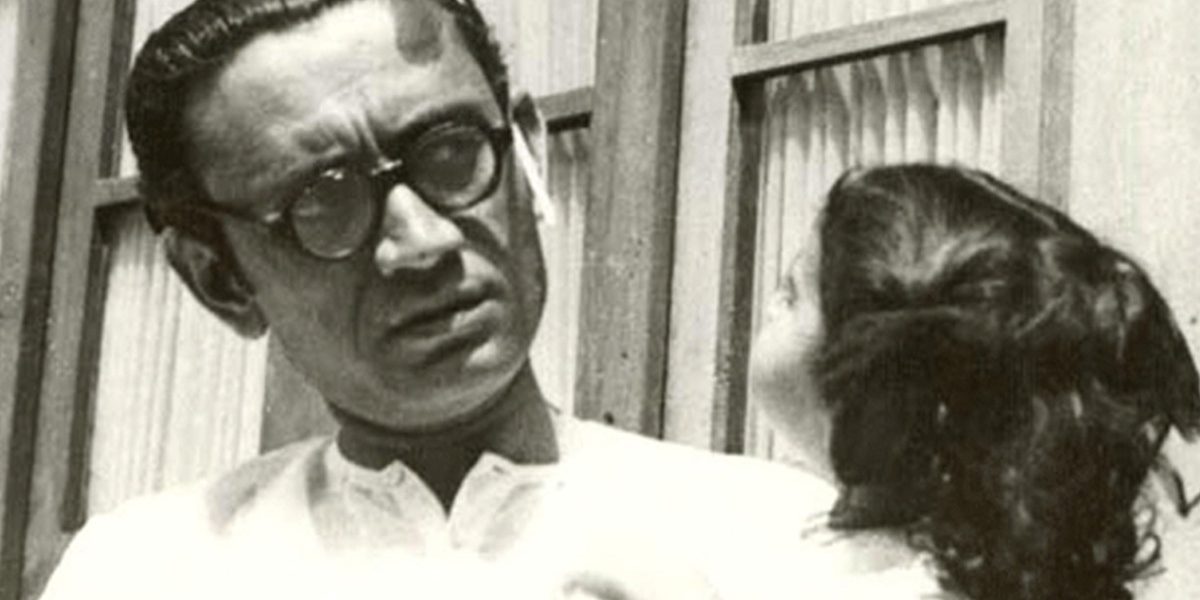 “She was playing with little girls in the neighbourhood alley.”

This is how Saadat Hassan Manto opens his story Das Rupay (Ten Rupees). “She” is the story’s young protagonist, yet, as Manto implies by introducing her with the generic third-person pronoun instead of her name, she could be any girl. Nearly eight decades after he wrote that story, she – the fictitious Sarita – seems to be gathering a disconcertingly increasing number of real-life sisters in India. As one comes across news reports of little girls being sexually violated – each more harrowing than the other – across the country, Das Rupay serves as an unnerving reminder of everything that’s at stake for and taken away from a young girl when she is raped.

Pushed into the flesh trade by her mother, 15-year-old Sarita is more a little girl than a teenager. Like most little girls, she’s free from worries. She enjoys, like I did in my teens, playing with girls a lot younger than her. And from the slivers of her personal life that have filtered through the horrific news surrounding an eight-year-old girl’s rape and murder in Kathua, we know she enjoyed playing with her horses. More recently, in the case of an 11-year-old girl who was raped by a dozen-and-half men over seven months in Chennai, her mother blithely assumed her daughter was playing with her friends when, in fact, she was being sexually abused.

Back in my teenage years, not all neighbours appreciated my propensity to play with girls younger than me. Some found such “childishness” annoying. As Tagore, too, illustrates in his short story, Samapti, this expectation for a girl to relinquish her girlhood no sooner than she hits puberty is anything but atypical in the Indian context.

In Das Rupay, Sarita’s playing in the nukkad irks her widowed mother for a different reason. Her daughter is an easy source of income and she hates to keep Kishori, the local pimp – and the fat-pocketed customers he brings  – waiting. As a cover for her complicity in trafficking her own child, the mother makes tall claims like, “I’m thinking of enrolling her to the municipality school that just opened,” which her neighbours know to be a sham. Sadly, for today’s flesh-and-bone Saritas, the school building isn’t always a safe place. School teachers, older students and even a principal in Patna can turn into sexual predators, as recent news reports suggest. 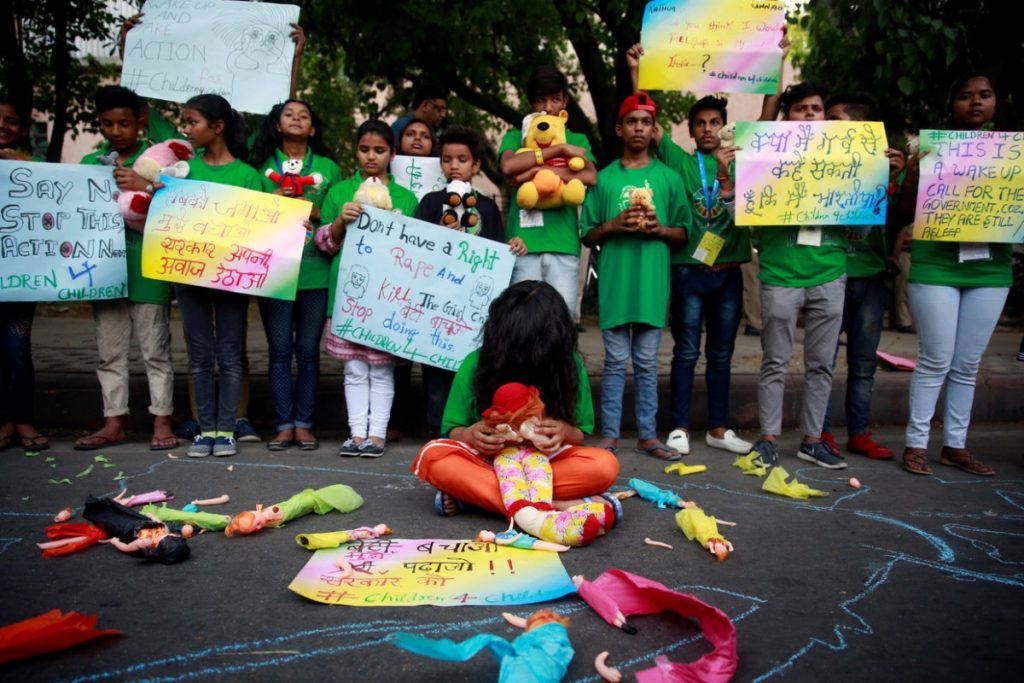 Children take part in a protest against the rape of an eight-year-old girl, in Kathua, near Jammu and a teenager in Unnao, Uttar Pradesh state, in New Delhi. REUTERS/Cathal McNaughton

The sadness of reality

It’s common knowledge that in the rape of young girls, someone who they trust – a teacher, a security guard or a neighbour – is often the abuser or an abettor. In Kathua, that someone the girl trusted would hand her over to her eventual rapists and tormentors adds a darker streak of perversion to the crime. For Manto’s Sarita, this involvement of an intimate “loved one” is a given. The moment her mother spots her playing and scolds her to stop “skipping and jumping,” sadness grips Sarita. She knows what it means: that Kishori has been waiting for her.

And yet, like the eight-year-old girl in Kathua’s love of the outdoors, like Nirbhaya’s delight in a film outing with a friend, Sarita, too, is given to the innocent joys of girlhood. When she learns that the seths Kishori has brought have a motorcar, she’s excited at the prospect of a joyride.

“She loved riding a car; when the vehicle sped through empty roads, the wind from outside slapping her face, an unspeakable joy seized her heart and she imagined the car to be an airborne vehicle, flying on the road.”

Manto goes on to describe how this girl of 15, who likes playing with her young girlfriends, is not the “woman” she is being forced to grow into by the “clients” who pay for her “services”.

The irony of Sarita’s innocence, as revealed in Manto’s signature plain-speak, is that she considers whatever happens to her on the “stone-cold benches of Worli” or on “Juhu’s wet sand” completely normal. Something she presumes happens to all girls. At one point, she asks her mother why another girl called Shanta, who is older now, can’t accompany her when she visits the houses of the rich. This is a chilling reminder of how young girls are often made to accept and even internalise sexual abuse, either by making it appear as a routine affair or by coercing them into silence using death threats. Like the teenager from Chhattisgarh, who was set on fire in May 2018, after her parents told a village council that men in the area had raped their daughter.

In Das Rupay, Manto contrasts Sarita’s love of riding cars with her dread of closed spaces. While draping a sari to go with Kishori to the seth’s car, she recoils, hoping the car would not stop at a hotel where “the men start drinking inside a closed room.” Her claustrophobia and unease with such hemmed-in spaces give one an unsettling insight into the trauma girls caught in similar situations must go through. The girl from Chennai was reportedly sedated before being taken inside vacant apartment buildings, basements, gyms and public restrooms by her assaulters.

The agency of masculinity

In telling Sarita’s story, Manto also shows how the agency of masculinity drives men to commit such acts with brazen impudence. The young men who have paid for Sarita’s “services” feel they are free to harass her. Deeming the girl/woman as one’s personal property is the hallmark of patriarchal agency. The sense of authoritarian ownership can stem from money, as in the case of Sarita’s clients, or from superiority of class, caste, majoritarianism or, simply from the chromosomal happenstance of being born as a male. It may be recalled that as the Kathua girl’s torturers were about to kill her, one of them – a policeman – reportedly asked them to wait as he wanted to rape her one last time.

Like with most of Manto’s works, Das Rupay stirs and shakes as much with its social commentary as with its literary brilliance. About halfway through the story, Kifayat, the driver of the car in which Sarita is seated between the two young men who want to “have fun” with her, swerves the car. With that, the story itself takes a twist that’s as unpredictable as it is fantastical. The car edges into Bombay’s slums, and Sarita, tickled by the touch of Shahab, one of the two men, breaks free of her inhibition. Even as her laughter rolls out of the car window to blend with the slaphappy breeze, she starts singing a film song. And then another. And another. Each one of these is a love song. One of them is the famous Devika Rani-Ashok Kumar duet, ‘Main ban ki chidiya ban ke sang sang dolun re‘. Manto uses to stunning effect the tropes of flight and films (and bring them together in his referencing of that single song) to inject life into a girl’s flight of fancy.

Sarita suddenly becomes a fluttering bird hopping between the front and back seats of the car, stripping the men of their bottled-up stiffness, but more remarkably, of their perversion. They join her in song, forgetting the transactional element of their relationship. This is easily the most endearing part of a story that could well have been a stereotypical, dark narrative. In its incredulity, it becomes the clear surface of a river that reflects everything – not merely the physicality or even emotional stability, but the core of her girlhood and inner joy – that’s in peril and arguably lost when a minor girl is sexually violated.

After an evening of frolic at the beach, marked by beer guzzling for the men and singing, dancing, and running along the shore for Sarita, Kifayat brings the car back to her urine-stinking neighbourhood. Sarita puts the ten-rupee note he had given her at the beginning of their trip on the passenger seat next to him.

Bewildered, Kifayat asks her why she is returning the money.

“What’s this money for?” is Sarita’s unambiguous response as she walks on.

Manto ends the story with Kifayat turning his head to look at his friends in the back seat. Asleep, they resemble the note in the front seat.

As worthless for fulfilling a little girl’s real desires, perhaps? And as worn out.