“Though the police slapped Section 354 against him, he was released without being produced before a magistrate. The due process was not followed because they are acting under pressure,” the complainant said. 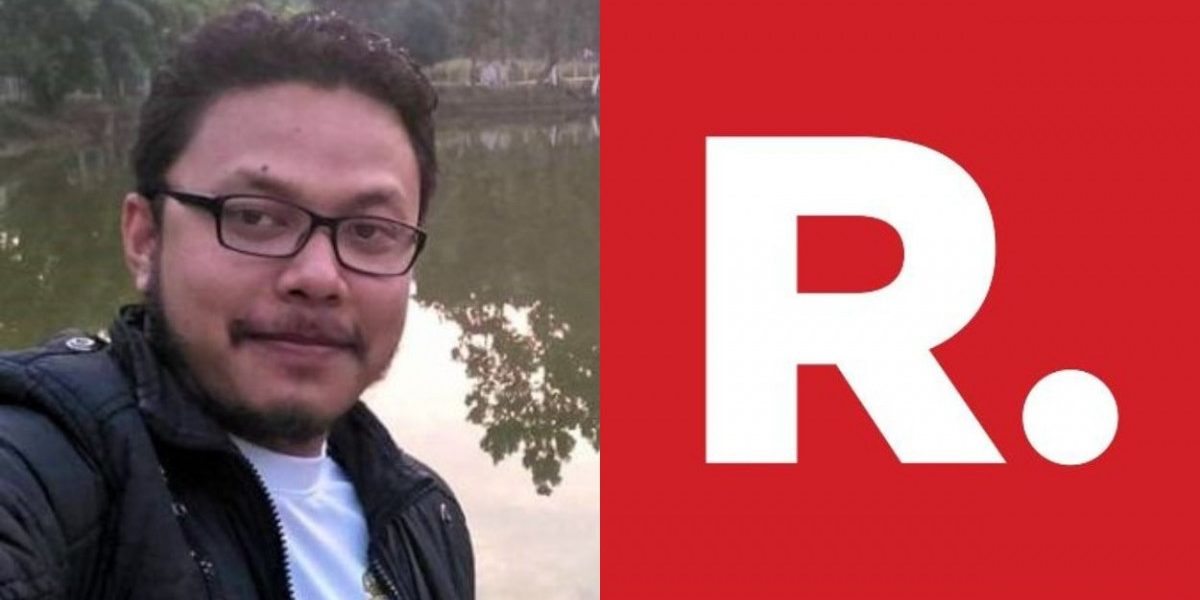 Republic TV reporter Aniruddha Bhakat Chutiya, who has been accused of “kidnapping” and physically and sexually assaulting a woman journalist in Guwahati, Assam. Credit: Facebook.

New Delhi: A Guwahati-based journalist has accused the Assam correspondent of Republic TV, Aniruddha Bhakat Chutiya, of “kidnapping” and physically and sexually assaulting her. A case has been registered against the broadcast reporter at Guwahati’s Dispur police station late in the night on December 1 based on an FIR filed by the complainant after she was “rescued” from a house in Joynagar area by her colleagues.

According to local media, the case has been registered under sections 354 (Assault or use of criminal force to woman with intent to outrage her modesty, 341 (Punishment for wrongful restraint), 392 (Punishment for robbery), 323 (Punishment for voluntarily causing hurt) 506 (Punishment for criminal intimidation) and 34 (Acts done by several persons in furtherance of common intention) of the Indian Penal Code. The accused was taken into custody soon after the complaint was made but was released on December 3.

However, the complainant, speaking to The Wire, alleged that the police “is acting under pressure” and “therefore released him from custody without even presenting him before a magistrate.”

“Though the police slapped Section 354 against him, he was released without being produced before a magistrate. The due process was not followed because they are acting under pressure,” she said.

The accused was released under Section 41 of the IPC.

The complainant also accused the police of “misguiding” her. “After I was rescued by some of my colleagues on Saturday (December 1) night, we rushed to the police station to lodge an FIR. I was in shock, not in a state to write a complaint. So the policemen asked a colleague of mine to write the FIR on my behalf. He had never written an FIR before, and the police didn’t guide him properly. They casually asked for a complaint in writing and said they would investigate. So, even though the accused kidnapped me with the help of another man with a knife, it was not mentioned in the FIR. I had marks on my body and yet it was ignored. And that is why the sections meant for attempt to murder and kidnapping were not brought against him. This has weakened the case.

“The policemen also gave me a wrong case number. Instead of number 3637, I was given number 3636,” the complainant said.

She was, however, sent for a medical examination.

Biren Baruah, the officer commanding (OC) of the Dispur police station, confirmed to The Wire that Aniruddha was “detained on Saturday night and released on Monday” without being produced before a magistrate. “He will cooperate with the investigation. We have asked him to come to the police station and he will come,” Baruah said. On asked about any specific date by which he would have to present himself at the station, he said, “I don’t know, the IO (investigating officer) would know.” Local media reported that “the investigating officer of the case refused to provide information citing pressure from the top brass of the department.”

“Even after six days, the Police hasn’t recorded my statement,” the complainant pointed out. The officer commanding couldn’t confirm when would it be done.

While narrating what happened on December 1, the complainant said she stopped at a stationery shop around 9.30 pm on her way home from work. “This is something I often do and Aniruddha was aware of it as I have known him for some time and he lived in the lane next to mine in the same area. I was surprised to see him waiting with another man in a secluded part of the lane. He was drunk, stopped me to talk and before I could react, he and that man dragged me into their house on the lane by putting a knife near my neck,” she said.

Once inside the house, her hands “were tied to a chair before he began physically assaulting” her. “When I resisted, he also sexually assaulted me. His mother was also present in the room and abetted him, which is why I have mentioned her in my complaint,” the complainant said. About the third person’s identity, she said, “I had never seen him before.”

After some time, she said, her “hands were freed” and “that is when I quickly pulled out my phone from my pocket which was on silent mode and informed my colleagues. They rushed, found the main gate of the house locked but somehow managed to rescue me.”

She added, “Though some people have said that I was in a relationship with him, it is not true. Being in the same profession, we did meet at various places and he had been pursuing me, but I had ignored it. I never thought it would come to such a pass.”

The Wire has sent a query to Republic TV editor-in-chief Arnab Goswami regarding the serious allegations against the reporter. This story will be updated upon receiving Goswami’s response.