The lack of adequate funds and a work permit mean they are always in a precarious situation, even if safe from violence. 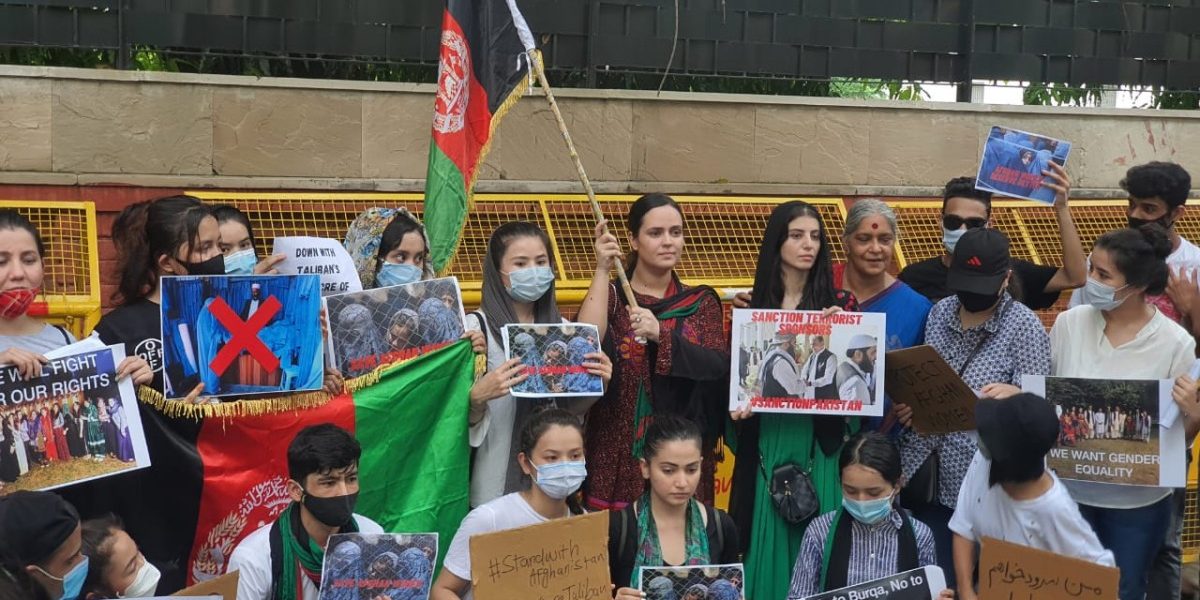 New Delhi: In August 2021, the world witnessed the takeover of war-torn Afghanistan by the Taliban. As Kabul fell to the Taliban’s guns, Afghan refugees around the world held peace marches, condemning the inaction of world leaders to combat the chaos in the seemingly perennial war zone.

Afghan refugees in Delhi also led two different protests to register their resistance against the injustices engulfing their homeland and to voice their pain on being neglected by the United Nations High Commissioner for Refugees (UNHCR).

Over the years, India has sheltered many Afghan refugees and asylum seekers under the aegis of the UNHCR. However, a number of women who have fled inhumane conditions in their homeland feel that building a life in India from scratch has been a painstaking undertaking.

Fariba Hakimi, mother to four daughters, arrived in New Delhi four years ago with two of her children. A victim of domestic violence, Fariba tried hard to survive the marriage with her husband, a drug addict. Affiliated with the Taliban, her husband took huge loans to pay for drugs, wrecking their home and their marriage. “My husband had to pay back the loan he took from a warlord; he was bankrupt. One day when I returned home, one of my daughters was missing. He had paid the loan by giving away my daughter, Farishta, to the warlord.”

Fariba was inconsolable, but felt she had to stay in the marriage. Two years later, another daughter was used to pay back her husband’s drug debts. This time Fariba protested more vehemently – only to be stabbed by her husband. After failing to get her husband arrested, she decided it was time to leave Afghanistan.

Hailing from Herat, today Fariba works as a gym trainer in Delhi. She says, “I have even sold boulani (Afghan bread) and prepared juice at local cafes to sustain my daughters here. Being a woman without a mehram (male guardian) in a foreign land is tough; in addition to poverty, I have also fought the male gaze.”

Fariba has not yet been accepted as a refugee and lives as an asylum seeker. Her application for refugee status was rejected by the UNHCR once and her form for an extension of asylum seeker status has been pending since June 2021. Given how uncertain her life is now, she says, it may have been better if she had died in Afghanistan.

Also read: ‘Efforts of Last 20 Years Wiped Out’: What the Taliban Takeover Means for an Educator

Police barricades and clotheslines demarcate the spaces where men and women sit together yet separately to demand their human rights as refugees. Another victim of domestic violence who fled Afghanistan’s Kunduz for Delhi sits quietly at the protest outside the UNHCR office in Vasant Vihar.

“I cannot go back, my husband has close links with the Taliban, he will kill me,” says Nadia Rahimi*, an Afghan woman who had sought refuge in India in 2015. As she tries to feed her sons biscuits for breakfast, which they reluctantly eat, Nadia says she is unable to make ends meet. She has been using up her savings to reach the UNHCR office to protest against the lack of opportunities that Afghan refugees and asylum seekers have. “Afghanistan is going back to where it all began; we are safe here but we have no future as refugees.” Nadia says other Afghan refugees, even complete strangers, are responsible for the half-full jars of food she has at home. The refugee community has been raising money for her. “I feel very helpless, but this is all the help I have,” she says, wiping tears with her hijab.

“Once I deliberately left my boys in the market because I didn’t have anything to feed them. Allah reunited us, but sometimes I don’t know what I will feed them the next day.” Nadia is among the many women who have fled Afghanistan without their husbands and struggle to earn a living in India, owing to cultural and linguistic barriers. Hailing from Chardara district, she receives Rs 5,500 from UNHCR every month as monetary assistance, but just her rent comes to Rs 9,000.

Sharifa Shahab, a 53-year-old refugee from Baghlan province, fled home with 16 family members. Shahab says, “The refugee status itself is a problem, but it’s a life in exile, our basic human rights get compromised and our vulnerability has no end.” Back in Afghanistan, Shahab worked as a women’s rights activist with the Afghan Independent Human Rights Commission. Having travelled to 29 provinces to promote human rights and discourage child marriage, forced marriage, human trafficking and sexual slavery, Shahab says she even rode horses to reach remote locations to defend human rights.

Also read: What Happens to Afghans’ Right to Internet Under the Taliban?

Shahab says that the UNHCR lacks a formal framework in India and tends to functions as an NGO, since the assimilation and naturalisation of refugees into citizens is an obligation expected only of nations that ratified the Refugee Convention. In addition, India also bars refugees from acquiring a work permit to enter the formal sector.

Due to the nature of her work, Shahab says, she was threatened by Taliban-backed corrupt government officials, but carried on. To silence her, Shahab’s son was abducted, but was later released in exchange of borrowed ransom. Today, Shahab is unemployed. She had received some money from her family in Afghanistan, but that has run out during the pandemic. She’s still an activist, though – and now represents the Afghan community at the Refugee Women Association.

“My people are dying; women are being traded as sex slaves. The world needs to do something, people need to raise their voice for us,” says Sakina Haidari, a 16-year-old from Ghazni province. Haidari decided that she wanted to stand for the people of her homeland the moment she saw violent images of war circulating on television and social media.

Haidari adds, “It has been more than 10 years that I’m living here as a refugee. I haven’t known what it feels like to live in one’s homeland, and maybe now I will never know.”

Rukhsara Hashemi, a 21-year-old refugee, says Kabul has never felt farther for her than it feels today. Hashemi’s father, a broadcast technician at Tolo News, received multiples death threats before the family finally fled. Hashemi and her siblings now struggle to pay for their school and college fee. While she works as a salesgirl to fund her college fees, her younger school-going sister paints cards and canvases to fund her education.

Hashemi recalls how she and her brother have qualified for a number of job interviews, but at the end, it’s the lack of a work permit that gets in the way. She says, “Without a work permit we cannot step into the formal sector, and even if we do, we get paid half of what Indian citizens do. This stagnates our growth.” She also says not having an Aadhaar card and PAN card makes refugees’ lives even more difficult.

Talking about the recent takeover of Afghanistan, Hashemi questions the Taliban’s motive. “Afghanistan has always been as Islamic republic, what Islam are the Taliban trying to impose?”

Miwa, a Delhi-based professional social worker, assisted with the translation of collected data from Dari and Persian into English.