The police is being held responsible for botching up the investigation. 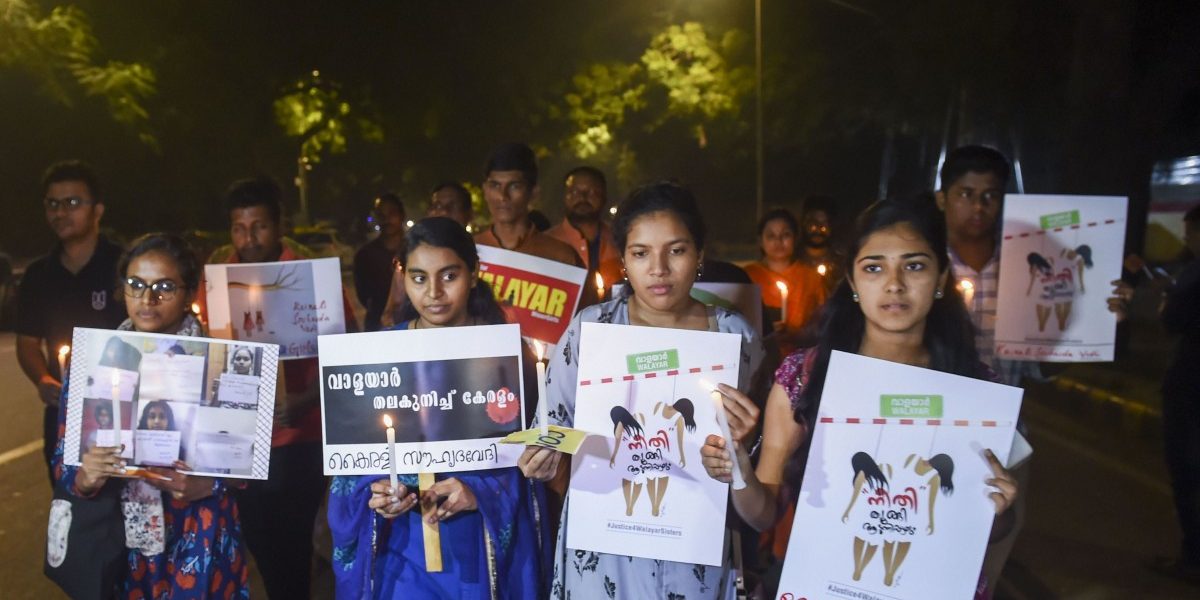 A protest march in Delhi against the acquittal. Photo: PTI

Kochi: After having fared reasonably well in the just concluded assembly by-polls, the Pinarayi Vijayan-led Left Democratic Front Government in Kerala has been caught on the back foot, thanks to a botched-up rape case in which two children of age 13 and 9 were found dead. All the accused have walked free after a fast-tracked trial process under the Protection of Children from Sexual Offences (POCSO) Act.

The opposition, civil society groups and concerned citizens cutting across the party lines are crying foul. Judge Muralee Krishnan S. observed that the “prosecution has miserably failed to prove the alleged offences against the accused beyond reasonable doubt”.

The United Democratic Front and Bharatiya Janata Party are already up in arms alleging the government deliberately botched up the case in order to shield the accused who, according to them, are Communist Party of India (Marxist) workers or sympathisers.

On March 4, 2017, a nine-year-old girl was found hanging from the roof of a one-room shed belonging to her mother, in Selvapuram near Walayar of Palakkad district in Kerala. Fifty-seven days before that, her 13-year-old sister had also been found hanging from the very same spot. Her death had been considered a a one-off case of a teenager dying by suicide. The girls’ mother and stepfather – both daily-wage labourers – were out working when their children died.

It was after the death of the younger girl that the matter took a serious turn, as local residents raised their voice against the police and district administration. The police and Child Welfare Committee under the Department of Social Justice were blamed for taking the ‘suicide case’ of the elder sister lightly.

None of the authorities had bothered to verify the details of the circumstances that led to her death on January 12, despite having a reference (vague but suggestive) of sexual violation in the post-mortem report. Ironically, this very report proved fatal for the case in the session’s court, where the accused were acquitted.

Forensic surgeon Dr P.B. Gujaral, who conducted the post-mortem examination of the younger girl, however, concluded his report by clearly suggesting a possible homicidal hanging. In the post mortem certificate, he wrote:

“…in the view of the age (nine years) and the length from the sole of heel to the tip of the right middle finger with right upper limb fully extended upward (151 cm) the possibility of homicidal hanging needs to be ruled out by correlating with measurements at scene of crime and through investigation”.

The investigation team, however, totally ignored this. The first case under Section 174 of the Code of Criminal Procedure was registered on January 13 in the Walayar police station. Another case was registered on March 4, 2017 after the death of the younger girl, under the same section.

Succumbing to the public outcry, the sub-inspector of police was placed under suspension and a new special team was constituted for the investigation. This team arrested four local residents and a minor, and charged them with Sections 305 (abetment of suicide of child or insane person) and 354 (criminal assault to a woman intending to outrage her modesty) of the Indian Penal Code.

Later, it was found that both children were subjected to sexual abuse, classified as ‘unnatural sexual intercourse’, and Sections 376 (rape), 377 (unnatural offences) of the IPC and Sections 5r/w6 and 7r/w8 of the POCSO Act were added to the charge. One of the accused, Pradeep Kumar, who does not belong to a Scheduled Caste, was also charged with Section 3(2) of the SC/ST (Prevention of Atrocities) Act.

The prosecution examined only 28 of the 50-odd witnesses, and gave up on the rest. Thirty-three documents were marked and the accused were examined under Section 312 of the Code of Criminal Procedure, and one of them submitted that he was not even present in the district at the time of the girl’s death.

Apart from considering the quantum of punishment, if the accused were proven guilty, the court took the following points into consideration during the trial.

Following this ‘golden rule’, the court felt serious doubts regarding the truthfulness of the deposition of three prosecution witnesses. These witnesses – three women/girls who had gone for an election campaign along with the two deceased girls – had been marked disloyal by the prosecution during the examination.

According to their statement given to the police, the deceased girls had told them that Kumar had exhibited his naked body before the elder girl and made her take a photograph of his nudity. Two of these witnesses in court omitted this part, which the court felt amounted to a material contradiction.

Moreover, three of these witnesses made contradictory statements about which election they were canvassing for. One of the witnesses said it was the Kerala assembly elections of 2016, one said it was for a local body election in which her mother was a candidate and the third one said it was a campaign by the student’s organisation, SFI.

Ironically, it was stated inside the court that the victims had been campaigning for the ruling LDF. Local residents say that this particular election campaign referred to in the judgement was in fact for the 2016 Kerala assembly elections, and the candidate they were campaigning was none other than the legendary CPI(M) leader and former state chief minister V.S. Achuthanandan.

However, during the cross-examination, the surgeon gave an alternate opinion as well – that it could be due to an infection in the region. The defence counsel argued that there was no conclusive proof to say that the girl was sexually assaulted. This very surgeon had earlier placed on the record that the possibility of sexual abuse should be ruled out through investigation. It was the police who totally ignored these forensic suggestions and threw the surgeon under the bus when it came to the cross-examination.

It is very perplexing that the prosecution did not bother to investigate the possibility of a homicidal hanging in both cases, despite having a forensic suggestion towards it. This is especially in the second case (for which the judgment is yet to be published on the court website), where the surgeon had suggested that the police rule out that possibility.

The children’s mother, who had earlier admitted that she had prior information that her elder daughter was sexually abused by the accused, did not depose in the court. According to the judgement, she came know about the sexual offences from the police.

The court, after analysing all these points, came to the conclusion that the prosecution could not prove nothing other than that the accused lived near the deceased and had the opportunity to commit the said crime.

CPI(M) on the back foot

When the case hit the headlines after the death of the younger girl, chief minister Pinarayi Vijayan said that no one guilty of this crime should be spared. But his own police department failed him miserably, with a totally botched up case.

The party was on the back foot right from the beginning, when local residents alleged that one of the accused was a CPI(M) worker who had been getting help from local party leaders. The mother of the girls repeated this allegation when the accused were acquitted, saying that they were helped by local leaders of the ‘sickle party’, referring to the CPI(M)’s election symbol.

The CPI (M) leadership denied the allegation and maintained that the party stands with the victim.

“Some local party workers might have accompanied the accused to the police station in the initial stages, which is quite normal, but after the lodging of the FIR, nobody from our party helped any of these accused,” said an area-level leader of the party.

Interview:  ‘To Be a Woman in This World Is to Cope with with Some Form of Violence’

“The developments in the Walayar rape case are very similar to that of Kathua or Unnao cases, where the Sangh parivar leaders are in the dock. None of us would hesitate to hit the streets against such atrocities. A reinvestigation must be conducted and that too with a central agency,” says opposition leader Ramesh Chennithala. The UDF has called for a hartal in Palakkad district on November 5, accusing the CPI(M) of shielding the accused in the Walayar rape case.

The BJP has started a 100-hour protest beginning Tuesday morning against the government. “The need for a CBI inquiry demanded by the mother of the deceased sisters must be considered,” said BJP leader Kummanam Rajasekharan.

The opposition stalled the assembly on the first day of the session, demanding a CBI inquiry. Chief minister Pinarayi Vijayan, though, rubbished the allegation of deliberate sabotage in the case. He said that the government will consider the possibility of a reinvestigation, be it by the state agency or a central one.

As the ruling party, the CPI (M) is already in damage control mode. The party had been receiving flak for appointing N. Rajesh, the defence counsel for the accused, as chairman of a district Child Welfare Committee – a political appointment through and through. After the chief minister’s statement in the assembly, Rajesh was removed from the post with immediate effect.

It is alleged that despite being appointed as the chairman of the CWC, Rajesh had been appearing in the court as defence counsel.  The opposition alleges that the nexus between the prosecution and the defence lawyer, who is a CPI(M) nominee, resulted in the collapse of the case. Interestingly, public prosecutor Latha Jayaraj is a Congress nominee who had been appointed during the tenure of the Oommen Chandy government.

The deceased girls lived a in a one-room shed with their mother and stepfather, both belonging to a Scheduled Caste. According to the many civil society activists, caste is likely to have played a crucial role in the case, leading to abject negligence from all authorities and the predators walking free.

The police, after insistence from the government which is under tremendous pressure, is mulling over the possibility of filing a revision petition in the Kerala high court. On the other hand, the director general of prosecutions has advised the government that there exists a possibility of a reinvestigation and that should be initiated.

Many legal experts say that a reinvestigation in the case will not be easy, unless some fresh pieces of evidence surface, giving the entire case a different trajectory.

“When, o, when, will the sun of justice dawn on the poor? It is dark from Walayar to Kashmir. Only criminals survive here and they rule the nation. Be warned: it will not always be so. The poet remembers. And people remember too,” poet K. Satchidanandan wrote on his Facebook wall after the verdict.