Not a Martyr: Dim the Halo Around Rape

Romanticising the rape and murder of Nirbhaya, the eight-year-old in Kathua, and countless others, and making martyrs of them, is no better than victim-blaming or shaming. They were raped and killed. No halo is bright enough to hide that. 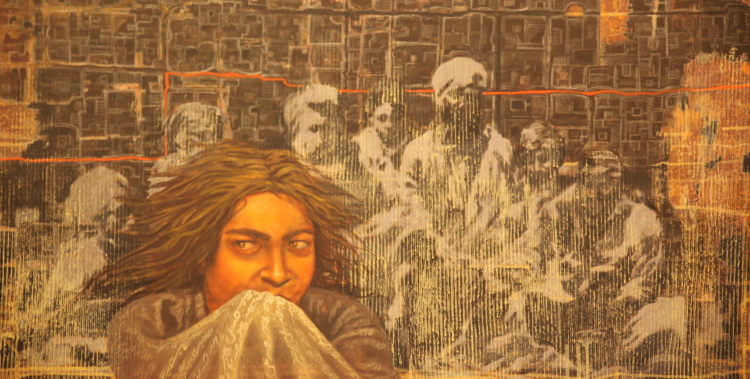 A painting by Tahir Siddiqui at the Dhoomimal Art Gallery in New Delhi, May 15, 2014, for a collection of more than 50 works in an exhibition paying homage to Jyoti Singh. Credit: Thomas Reuters Foundation/Nita Bhalla

On April 24, the Indian Supreme Court said rape victims, whether dead or alive, have dignity and cannot be “named or shamed”. The court was ruling on whether the identity of rape victims should be disclosed, following the brutal rape and murder of an eight-year-old girl in Kathua in Jammu and Kashmir, that has roiled the country in the past few weeks. The victim, right from the beginning, had been identified in the media by her name. According to the Supreme Court, that is problematic.

“The dead also have dignity,” the ruling said.

It said that even in cases where rape victims were alive and were either minors or of unsound mind, their identities should stay hidden as they have the right to privacy and cannot live under such a “stigma” throughout their life.

Words like shame, dignity, stigma abound through the ruling that attempts to view rape and women’s response to it through the problematic lens of a woman’s dignity. Naming is not shaming. Not in abuse cases at least. Which is why we all participated in the #MeToo campaign, right?

Wrong! Because even as we all enthusiastically participated in the #MeToo campaign, we were still calling Jyoti Singh, the 23-year-old paramedic who was raped and killed in 2012, Nirbhaya. Not her name but a decorative epithet imposed on her in the days following her rape, when she lay in hospital fighting for her life.

This despite the fact that both her parents had revealed her name and urged the media to use it.

“My daughter’s name was Jyoti Singh and I am not ashamed to name her. Those who commit heinous crimes like rape, their heads should hang in shame, not the victims or their families. You should take her name too,” Singh’s mother had unequivocally told the media on the third anniversary of her daughter’s rape and murder that had shocked the world and arm twisted the Indian government to strengthen its women safety laws.

“We want the world to know her real name… My daughter didn’t do anything wrong, she died while protecting herself… I am proud of her. Revealing her name will give courage to other women who have survived these attacks. They will find strength from my daughter,” he had said.

Singh’s parents wanted her to be known by her name. For them, she was a flesh and blood human being. They felt her pain and struggle, while the rest of India romanticised her death and turned a heinous crime into a tale of heroism, because of course, it helped us cope better as a society.

So, we called her names like Jagruti, Damini, Amanat, Delhi Braveheart and India’s Daughter. It touched our emotions, it outraged us because we can only feel for a woman when we mould her into a relation – mother, daughter, sister – or into a overtly courageous avatar. More than 90 women are raped in India every day. But we need epithets to feel outraged. We need to characterise them on their levels of gruesomeness, to feel outraged.

Why do we insist on calling Jyoti Singh Nirbhaya? On that December night, I am sure she was feeling far from courageous. Her fear and helplessness can only be imagined. When she screamed and cried for help, courage was far from her mind. When she fought for her life in the hospital for days, it was not a choice.

We romanticised her plight well. And in that we made her a martyr, her predicament a tale of heroism. When we call Singh Nirbhaya, we are hailing her personal courage as if to redeem the horrific crime. But there is no redeeming rape. Whitewashing victims of rape stems from the social conditioning to hide the shame – coalesced with a woman’s honour in this part of the world – and is no better than victim-blaming or shaming.

When we call Singh, Nirbhaya, we are putting a halo around her suffering. We are deifying her and her “lost honour”. If the Indian Supreme Court manages to ban rape victims from being named, they are going to fuse forever the concept of rape and lost honour. It is going to institutionalise the response of women to abuse.