Who Represents Women and Minority Tribes in the Naga Peace Process?

The sad answer is 'no one', given that women in the state are systematically excluded from decision-making bodies and minorities and the working classes do not appear to matter. A photograph taken during the signing of the 2015 framework agreement between the Centre and NSCN (I-M). Photo: PTI

The more than two-decade-old Naga peace process was jolted earlier this year when Nagaland’s governor flagged “unrestrained depredations by… organised armed gangs” and the state government’s hands off approach towards law and order. The National Socialist Council of Nagaland/Isak-Muivah, or NSCN (I-M), that has expended most of its political capital in maintaining the “symbolism of a state-in-waiting” took offence.

To distinguish itself from “armed gangs”, the NSCN (I-M) released its version of the hitherto secretive August 3, 2015, Framework Agreement. The outfit’s general secretary suggested that the agreement refers to it as the representative of one of “the two entities sharing sovereign power.” He added that the agreement will pave the way for the “inclusive peaceful co-existence of the two entities,” where ‘inclusive’ “means all Naga [sic] in different administrative units and political camps are to be included in the agreement (emphasis added).”

Until recently, the NSCN (I-M)’s inclusiveness covered only New Delhi and Camp Hebron. It refused to share the Framework Agreement with other factions, let alone Nagaland’s civil society. This pushed the civil society to seek an alternative route to the negotiating table where Nagaland’s future was being debated.

Nagaland-based factions nudged by the civil society joined hands to overcome their political insignificance and signed an “Agreed Position or Preamble” with the government on November 17, 2017. This forced the NSCN (I-M) to conditionally extend the scope of its inclusiveness to other factions, provided they accepted the primacy of the 2015 Framework Agreement.

Is there room for interpreting ‘inclusive’ in more inclusive ways by accommodating the concerns of women and minority tribes?

Women, irrespective of their ethnic background, are foremost among those not formally represented in the peace process. They deserve to be heard because they have suffered the most in the seven-decade long conflict and played a crucial role as peacemakers qua intermediaries between various stakeholders.

Despite constituting a sizeable share of the cadre of some of the factions, women are not part of the leadership of insurgent groups. Some of the best-known civil servants, writers, artists, academics, editors, journalists, entrepreneurs and sportspersons of Nagaland are women, but they are marginalised in the overground political space too. Except the Naga Mothers’ Association (NMA), the rest of the civil society as well as faith-based organisations are led by men. The NMA’s marginal status was evident during protests against the reservation of seats for women in urban local bodies.

The scale and persistence of the exclusion of women from formal decision-making bodies of Nagaland is perhaps unparalleled. There was no woman contestant in five out of 13 assembly elections and 12 out of 14 parliamentary elections held after the formation of the state in 1963. The last time a woman contested a parliamentary election was in 1980. Over the past six decades, only 17 women contested elections to 23 assembly and parliamentary constituencies in Nagaland. These include three women who contested more than one election. Only five of the 17 women contestants were fielded by Nagaland’s regional parties, while nine women contested as independents and the rest were fielded by national parties including the Bharatiya Janata Party. The Congress has never fielded a woman candidate.

Six out of the 12 districts of Nagaland have never seen women contestants, while in three others, women have not contested elections after the 1980s. Three districts – Dimapur, Mokokchung and Tuensang – account for 80% of women contestants after 1997, i.e., the period after the ceasefire agreement between the government and the NSCN (I-M) was signed. During this period, women from only six out of the 14 recognised Naga tribes have contested elections.

Just one woman, Rano Shaiza, managed to win an election in the last 60 years. Without belittling her enormous contribution in public life, it bears noting that Rano was Naga National Council president A.Z. Phizo’s niece and the sister-in-law of Manipur chief minister Yangmaso Shaiza, whose wife, Hangmila Shaiza, was Manipur’s first woman member of the legislative assembly. While Rano won the 1977 Lok Sabha election to the lone parliamentary constituency of Nagaland, she was the runner up in 1980. Interestingly, she forfeited her deposit when she contested the 1982 assembly election as an independent candidate from Western Angami constituency, which includes her native village, Khonoma. In this election she seemed to have bagged fewer votes than the electorate of Khonoma.

The odds against women candidates should be obvious. Yet a hysteria was whipped up when, after a decade and a half of stalling, the state government finally decided to implement a modest proposal to reserve seats for women in urban local bodies. The male-dominated civil society opposed the imposition of reservations, which is allegedly meant exclusively to address social inequality in caste-based societies on an inherently gender just tribal society. Women who dared to involve themselves in the election process were threatened with excommunication, in many cases by bodies that have no authority to do so under the customary law. 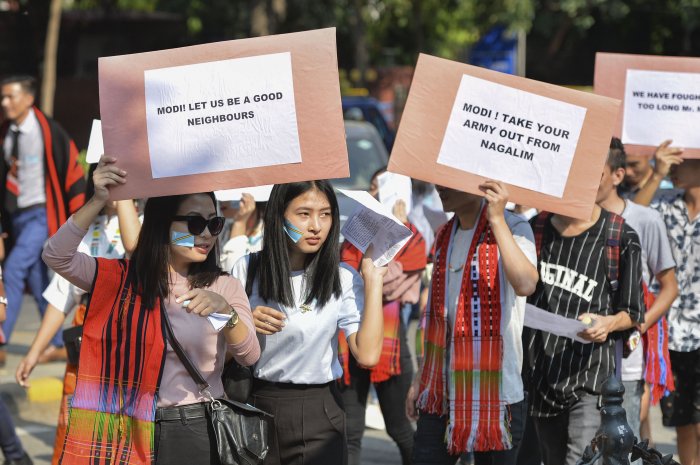 Delhi-based students from Nagaland stage a protest march demanding solution to the Naga peace talks, and a decision on the Framework Agreement. Photo: PTI/File

A Kuki was among the signatories to the memorandum of the Naga Club to the Simon Commission, which is the bedrock of the Naga political movement. Kacharis, on the other hand, were the founders of Dimapur, which has emerged as Nagaland’s commercial capital and transport hub. Both communities were part of the interim body that paved the road to Nagaland’s statehood. From being part of key milestones of Nagaland’s history, Kukis and Kacharis have been reduced to mere endnotes. They have remained unrepresented in the state assembly since the late 1980s.

Kukis were severely affected by the ethnic violence unleashed by the NSCN (I-M) in the 1990s, when many villages were depopulated. Kacharis, on the other hand, have suffered a steady loss of land since the late 1960s. Unable to bear the pressure, many Kacharis have migrated to Assam. The Kachari Rajbari, a monument of immense archaeological significance, lies unattended in the heart of Dimapur. The Kachari name of Dimapur has survived, though, because of differences among Nagas over a substitute that does not lean toward any specific Naga tribe.

There are at least three other groups whose interests are not represented in the peace process. These include unrecognised indigenous Naga tribal communities such as the Tikhirs, who have been struggling for decades for recognition as a tribe distinct from the Yimchunger tribe. The other unrecognised group is the small Rongmei Naga community of Dimapur, whose ancestors migrated from Tamenglong in Manipur long before the formation of Nagaland. They are caught in the crossfire between the Nagas of Manipur and Nagaland. The third group includes the Naga and non-Naga poor who supply the cheap labour that drives Nagaland’s highly unequal economy.

Can we expect that an agreement that is going to be signed in the 21st century will create conditions conducive to improving the representation of women in decision-making bodies and reforming customary laws that deny, among other things, equal property rights to women? Is it going to provide safeguards for the indigenous non-Naga tribes, unrecognised tribal communities and the working classes?

Vikas Kumar teaches economics at Azim Premji University, Bengaluru, and is co-author of Numbers in India’s Periphery: The Political Economy of Government Statistics.