What kind of an offensive anti-women narrative on the Delhi riots is the police trying to peddle? 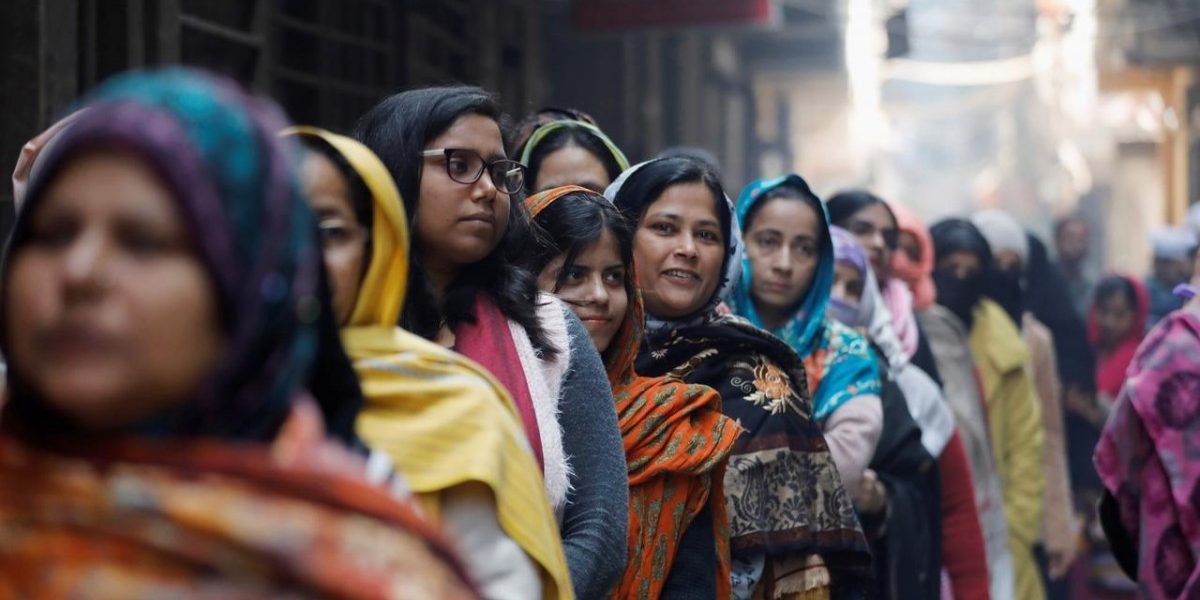 Voters stand in a queue as they wait to cast their vote outside a polling booth during the state assembly election, in Shaheen Bagh, New Delhi, India, February 8, 2020. Photo: Reuters/Anushre Fadnavis

Muslim women in India have been shackled and then saved so many times, it is hard to keep up. For the longest time they were oppressed, repressed and perennially depressed. Squashed into complete human rights misery – by their religion, by their primitive men, and by medieval personal laws.

Two principle acts of ‘saving’ ensued. First the triple talaq law, through which Prime Minister Narendra Modi himself rescued his Muslim sisters from the pincer-grip of their ever-talaq-ing patriarchal husbands. So firm and unyielding was this rescue operation that the poor sods now face jail time for saying the T word three times at a single go, even in their sleep, even though the Supreme Court judgment of 2017 emptied the utterance of all legal meaning. It has no legal consequence – said three times or 10. And does not amount to a legal divorce.

Yet, there was such mystifying celebration in the corridors of powers that most people imagined something dramatic had happened. Sweets were distributed, press statements issued. Photo ops of delighted Muslim women, in the rakhi format presence of leaders, graced our papers. The second rescue operation was Kashmir. Saving the Kashmiri women from the terrible laws of Muslim-land was a crucial narrative accompanying the August 5, 2019 take-over.

One would assume that these two seminal acts of rescue – and disproportionate usage of the nation’s resources and eyeballs – for just one community of oppressed women would be enough to last for a while. The rest of the nation could now go its merry way, and leaders could deal with important business like the COVID-19 crisis, the economic downturn, the Chinese intrusion and so on.

But, Muslim women, full marks to them, had taken the exhortation to ‘go forth and be free’ literally, and decided to lead, not just one or two, but an estimated 200+ protests against the CAA-NRC-NPR across India. It was quite breathtaking. Any believer in democracy would have been wonderstruck at the silenced and oppressed coming out to proclaim their existence, and demanding their place in the national story.

One must respectfully assume that the women knew what they were doing. Anyone who respects the agency of women must acknowledge that so many women, in so many cities and towns, understood the CAA and all its implications. They decided in their wisdom that it was neither in theirs’ nor their nation’s health to allow such a biased law to go unchallenged. They decided for themselves that the threat was grave enough for them to sit night after night in the most bitter winter Delhi had seen in over a century. You read right – coldest in 119 years!

As individuals, citizens, women, and a community – and they are rightfully all of these – they were fearful that their rights to their country were being insidiously diluted, and they felt they must fight unitedly under the one banner that guaranteed complete equality and freedom – the Constitution of India. Turns out that this much exercise of female freedom of spirit, body and intellect was not what their erstwhile saviours had in mind.

Also read: After August 5, It’s Hard for India’s Muslims to Not Feel Orphaned in their Motherland

So now it seems a third round of attention on Muslim women – Operation Shackle – is underway. This one is markedly different from the first two. The triple talaq thing was less about saving Muslim women than about legally whacking Muslim men down to their lowly place in the social pecking order of new India. The Kashmir one was about showing the entire Indian Muslim community that nothing and no place, especially Kashmir, can ever be controlled by large numbers of Muslims. This one is about the idiot Muslim woman, whose best bet for survival it seems is just to stay at home.

This newest narrative is being constructed via the Delhi riots investigation. A bare reading of some of these salacious, leaked ‘confessions’ on Zee News, reveals a spin deeply offensive to all women. For in this, Muslim women are feeble-minded morons.

In the newest ‘idiot’ avatar, Muslim women of Northeast Delhi were apparently being led around the nose like moronic flock of sheep by a retinue of pied pipers. Sample this gem from the Zee News stable on Aug 11, 2020:

“In her confessions, Gulfisha told Delhi Police Professor Apurvananda of Delhi University was also part of the conspiracy. He was in fact at the forefront of the planning being hatched for the riots. Gulfisha has confessed that Professor Apoorvananda also praised her after the riots for doing a good job.” 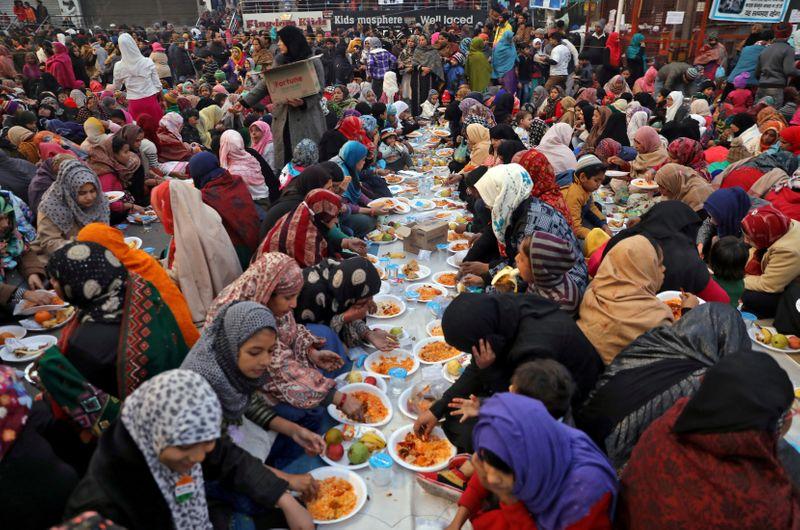 Never mind that this gentleman is variously spelled Apurvananda, Apoorvananda, Apoorvanand and Apurvanand in the same story (indicating to me the undue ‘no-time-to-even-do-spell-check’ haste with which it was put out), the description of his praise-showering for acts of gruesome violence is truly creepy. It has shades of the charismatic ‘Daddy’ of a Gurmeet Ram Rahim Singh Insaan type cult. In which the young Muslim woman is a ‘hungry for praise’ fawning acolyte. The Delhi Police needs to seriously review its playbook. Because this is a sick-making, anti-woman fantasy tale, and must never be allowed to take wings. More of the same:

“Gulfisha told police about the planning of these riots in which burqa-clad women were prepared to incite the riot so that no one could be identified. The women were also asked to bring chili powder, which could be poured into the eyes.”

The Hindi version of the same story adds stones, empty bottles, acid and knives to the list of things to be brought.

To project Muslim women or their choice of a burqa as an act of evil strategy, should offend people of all faiths. It offends me. It offends all women. Many Muslim women will experience their faith and the dignity of their attire being abused in this narrative. The narrative builds on a core of discomfort, even subliminal fear of this garment. This has nothing to do with debates on women’s emancipation or on what is the appropriate sartorial signifier of female freedom. Fact is the burqa evokes an instinctive negative reaction far more than say a full-on ghoonghat.

The reaction is not merely to something you may not like, but it is equally to something you do not trust. And the suspicion comes not from the folds of the burqa as garment per se, for such mistrust does not attach to the Pope’s far more voluminous robes. It comes from a suspicion of the Muslim wearer. It comes from hate assiduously cultivated over decades, worldwide. When the mind and heart are attuned to an instinctive othering, all accoutrements of ‘the other’ can become fodder for deepening fear and suspicion. The burkha is thus weaponised, and becomes something sinister. A criminal cloak, not a cultural choice. (‘Fear the Muslim. Fear women who don burqas even more. For they hide dark evil beneath their robes, including mirchi powder to be poured into innocent eyes.’)  The subliminal image construction of lurking female evil is an attack on all women, burqa-clad or not. And, yet there is more:

“Gulfisha used to visit different streets to mobilise women to incite them to stage protests against the Citizenship Law and NRC. The motive behind bringing burqa-clad women to the protest site was that the police would not use force against them, and the same was witnessed in Shaheen Bagh. If the police tried to use force, then the atmosphere will deteriorate and it will ultimately benefit the planners of the riots, she added.”

To this I take offence on more counts than can be counted. Let me just make two points. One, why is it that Muslim women, in burkha or hijab or neither, are so ‘incitable’? Is it that all Muslim women are potential rioters or Muslim women in burqa are specially privileged because they are both rioters and shields? What is going on? There is apparently this large population of seemingly dumbass people easily herded, yet who so cleverly and quickly morph into a strategic, armed formation.

Second, the man the story calls Professor ‘Apurvananda’ – is actually Apoorvanand, a respected academic, Hindi literature professor, and public commentator of dignified visage and insightful speech. It insults my sense of decency that he is portrayed as the cult leader of burqa-clad sheep. Picture it in your mind’s eye. And the image of a flock of brainwashed burqa-clad Muslim women following this male, Hindu, academic around, to commit arson, murder, and other unimaginable acts of horrific violence, will either anger or make you laugh out loud. You would have to be feeble minded or a very determined consumer of psychotropic drugs to believe this misogynistic tale.

To end, reading this ludicrous fiction has left me offended, disrespected and outraged. The story being created demeans all women, all Muslim women, and indeed all good people, of all faiths. I hope that all of India will stand up to this nonsense of projecting Indian women’s peaceful protests as a sinister act of conspiracy to commit riot, and vilifying anyone who stood with them, spoke with them, and for them, as their ‘criminal mastermind’. This is how they always try and bring women down.

World history and contemporary global reality tells us this – when women, especially subaltern women stand up, come out and lead, they bring peace, they further democracy, they deepen love for equality in the family, community and nation.

India will be disgraced if its most historic women-led protest of contemporary times is allowed to be sullied, demeaned and perverted by spin doctoring into a riot conspiracy. For this is how patriarchy and communalism combine. The women of India, the Muslim women of India, and all who supported, inspired, encouraged, cheered and sang with them, Hindu, Muslim, male, female and transgender, did not cause the Delhi riots. Indian women certainly know that. I truly hope the police figures it out pretty soon. Let the world not see the great Indian state, the world’s largest democracy, trying so hard to bring its own empowered women citizens to their knees.