Talking of how Muslim women’s education, employment and health have taken a backseat, the 39-point manifesto calls for political parties to respect, restore the rights of all minorities.

New Delhi: In light of the upcoming Lok Sabha elections, Bebaak Collective and grassroots Muslim women activists from over ten states released a national manifesto on March 27 at the Press Club of India.

The manifesto and its supplementary charter focuses mainly on women’s issues, and rights for the Muslim community and other minorities across India. It asks for the right for all citizens to live without fear, and with dignity.

The 39-point manifesto demands a law against mob lynchings and calls for all political parties to respect and restore the rights of all minorities. 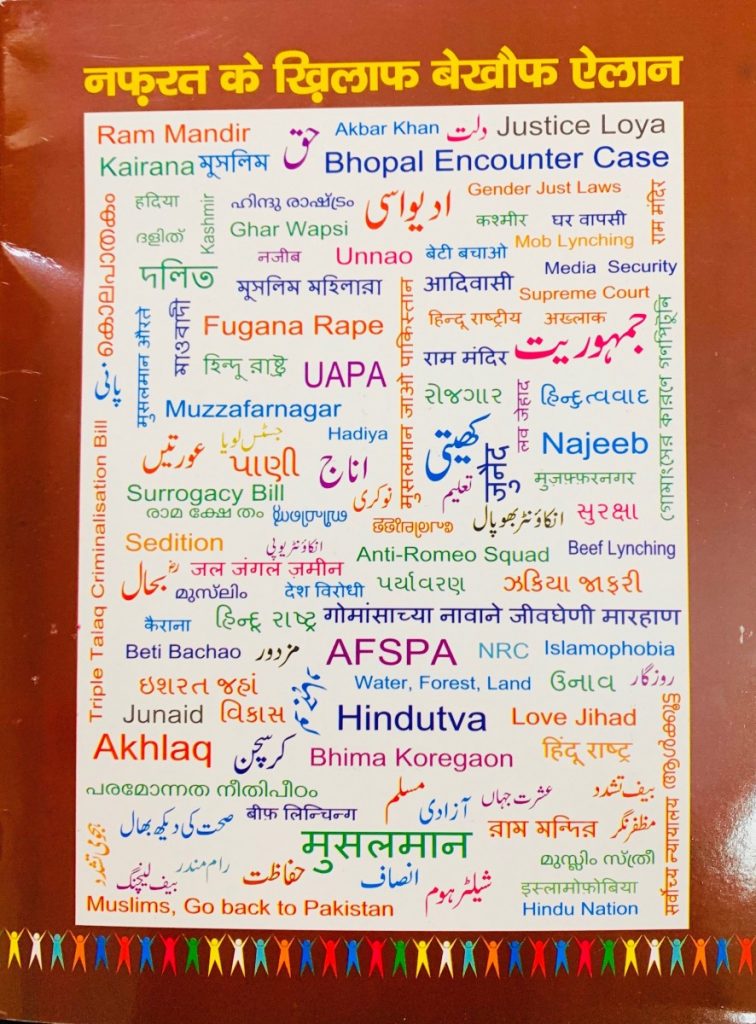 The manifesto for the general assembly elections, 2019. Credit: The Wire

In addition, the manifesto also demands 33% reservation for women in parliament, a repeal of the prohibition and restrictions on slaughtering and sale of cows, implementation of the Sachar Committee report on the socio-economic and educational status of the Muslim community, and end to female genital mutilation, recognition of the historical contribution of Muslims to the country, scrapping of anti-conversion laws, the curbing the rhetoric of ghar wapsi and love jihad and the reopening of cases of the 2013 Muzaffarnagar riots to punish the perpetrators.

The grassroots level women activists from Assam, Uttar Pradesh, Maharashtra, Bihar, Gujarat, Madhya Pradesh, Jharkhand, Uttarakhand, West Bengal and Haryana condemned the rising tide of intolerance and hate crimes committed against minorities across the country and asserted the democratic rights of all citizens enshrined within the constitution.

An atmosphere of fear and insecurity

Rehana Adib, a social activist from Muzaffarnagar, spoke about the climate of fear in the country. Talking about how most Muslim mothers fear for the lives of their family, she said, “I have to tell my son – be polite, say adaab. He gets upset with me since he is pursuing a law degree. He asks me why he has to bow and scrape. In spite of being a social activist, I am scared for my son’s life.” 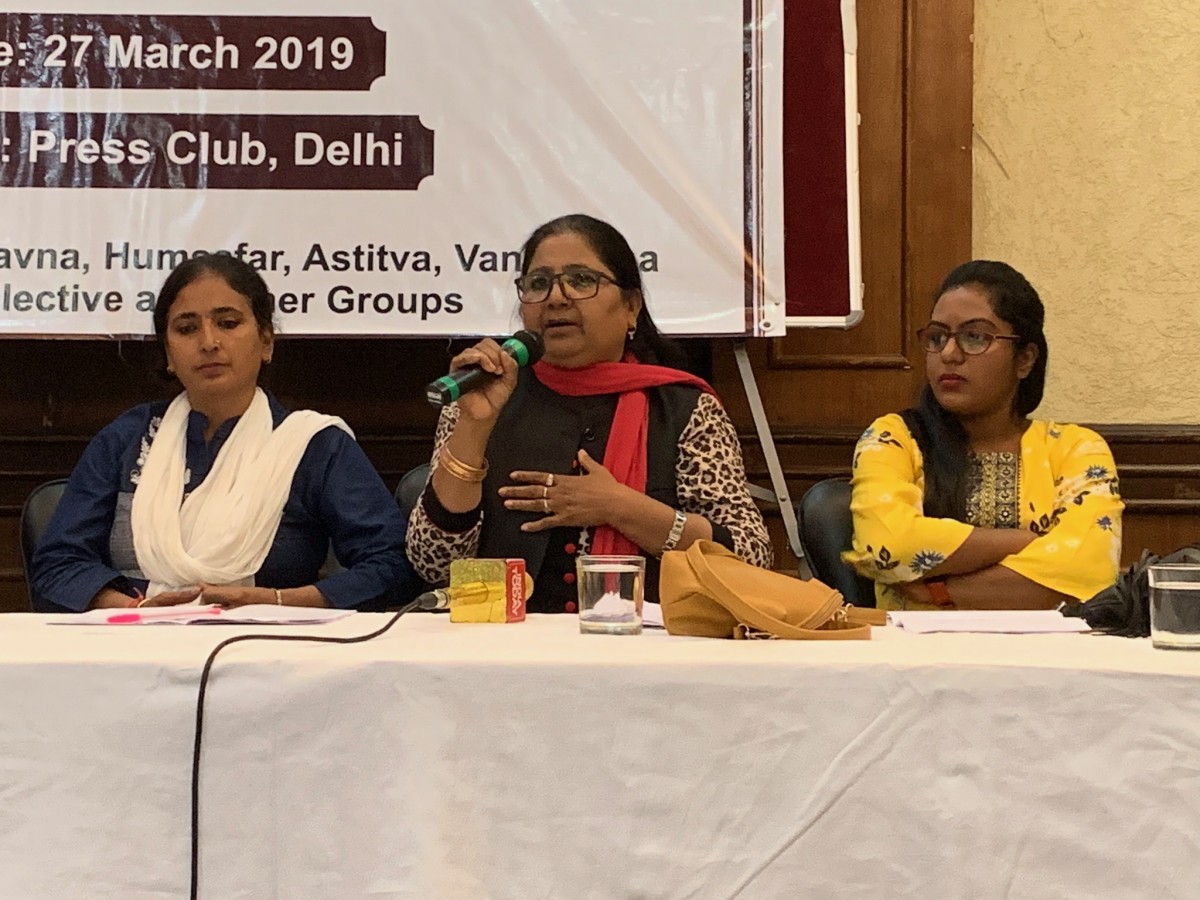 Rehana Adib, a social activist from Muzaffarnagar, speaks at the press conference on March 27, 2019. Credit: The Wire

Reshma Vora spoke of how Muslims in Gujarat live under an ever-enduring threat of communal violence. “We are scared about incidents of mob violence based on false rumours circulated on social media,” she says. The manifesto, too, laments the ghettoising of Muslims into areas which lack basic amenities and spatially limit women.

The manifesto also talks of the disproportionate policing of Muslim neighbourhoods and how the poverty of the community is used to stigmatise and criminalise them. It points out how conservative codes of morality, manifesting in the form of ‘Anti-Romeo Squads’, are being arbitrarily used to target minorities.

In the context of the rise of mob lynchings by gau rakshaks, the manifesto claims that the ban on beef enacted in various states is being used to target members of the Muslim and Dalit communities – who have been traditionally involved in the business. The ban has been used by cow vigilantes to assault members of the minority community and has also led to the monitoring of their private lives and their food practices, it says.

Shabana, from Uttar Pradesh, was vocal about the government’s implementation of laws that selectively target minority communities. Explaining how beef was one of the few affordable sources of protein for Muslims and other poor communities, Shabana pointed out that its ban disproportionately impacts and undermines the heath and nourishment of an already vulnerable community. The ban on beef has also emboldened cow vigilantes in the state, she said.

“We had never heard the word mob lynchings before this government. Why are mobs being encouraged and who is supporting it? When the Supreme Court has asked all states to enact laws against mob lynchings, then why is the government silent?” she asked. Shabana from Uttar Pradesh speaks at the press conference on March 27, 2019. Credit: The Wire

Khurshida, whose husband Umar was killed by a mob for transporting cows in November 2017, was amongst the women present. She broke down as she narrated her inability to pursue a legal case due to communal tensions in her hometown Mewat, as she said it could put her and her eight children at risk.

“Attending court hearings is also extremely difficult because of the threats we have received. The government is not helping us. I request the political parties who are elected to power to frame a law against mob lynching.” she said. 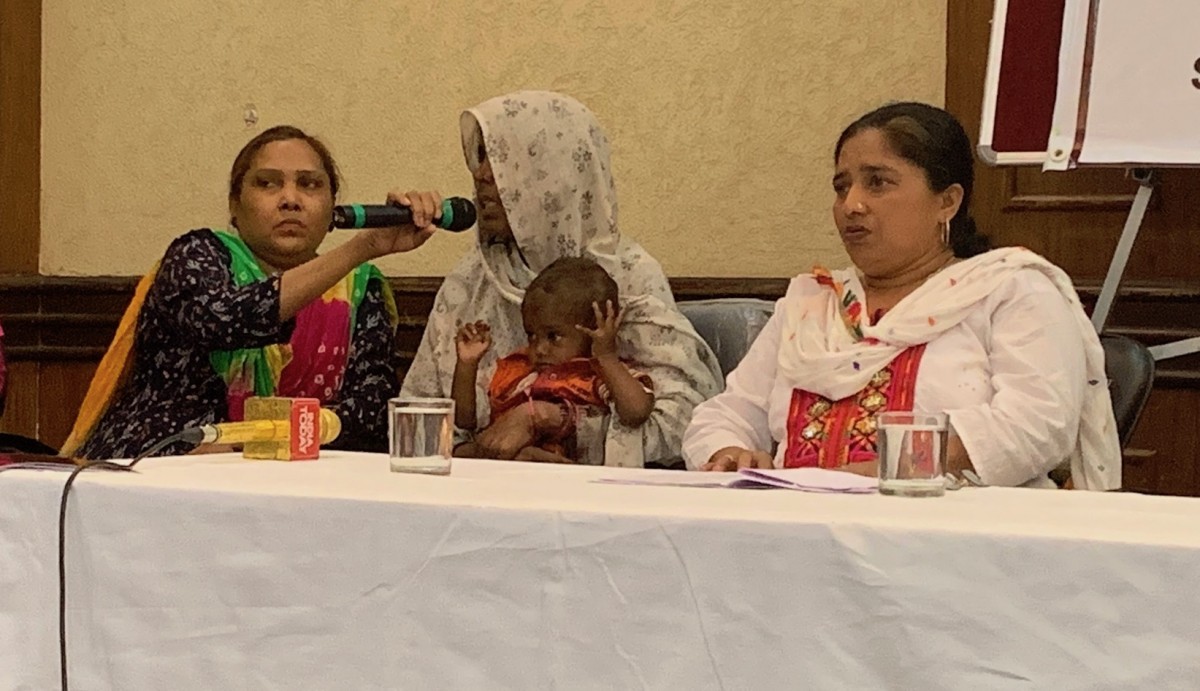 Khurshida, whose husband Umar was killed by a mob for transporting cows in November 2017, speaks at the press conference on March 27, 2019. Credit: The Wire

The manifesto also demands that the Muslim Women (Protection of Rights on Marriage) Ordinance, 2019 be scrapped as it “is discriminatory and reflects disproportionate punishment”. Stressing that the provisions in the bill would make Muslim women even more vulnerable economically and prone to abuse at home, the manifesto points out it counter productivity.

The manifesto also criticised the absence of gender justice in the uniform civil code and questioned the ruling party’s intentions to portray themselves as ‘saviours’ of Muslim women without advancing any policies to actually ensure gender equality.

Bringing up the practice of female genital mutilation, or khatna, prevalent amongst the Bohra community, Masooma Ranalvi, a member of WeSpeakOut, said:  “For the past five years, we are fighting against our religious leaders and have approached the government as well. But we have not been heard,” she says. The manifesto calls for the abolishment of the practice.

From Assam, Rehana spoke about the climate of fear and Islamophobia in the state that targets Bengali speaking Muslim women, especially in the aftermath of Assam’s National Citizenship Register (NRC).

“People are either citizens or foreigners in other places. Only in Assam do we see ‘doubtful citizens’,” she said. “They get profiled based on their religion and origin and are sent to detention camps to face ill-treatment and torture. Women, and especially Muslim women, continue to be the worst affected groups in this situation. Women’s names are changed after marriage, making it extremely difficult for them to link their documents in order to prove their citizenship,” she said.

The manifesto also calls the Citizenship (Amendment) Bill, 2016 “blatantly exclusionary” and claims that it “targets an already vulnerable community, in the name of regulation of population and pushes a sectarian agenda”.

Also Read: The Sangh Sees the NRC as a Device to Target Muslims All Over India

Addressing how Muslim and other minority communities have been neglected and left out of the narrative of ‘vikas’ and development in the country, Reshma Vora spoke about the hazardous impact on public heath due to the industrial wastage dumped into rivers in Gujarat. Saying that the Swachh Bharat Abhiyan  has yet to reach Gujarat, she pointed out the various social stigmas and health hazards that many women have to suffer as a consequence of this unhygienic water. 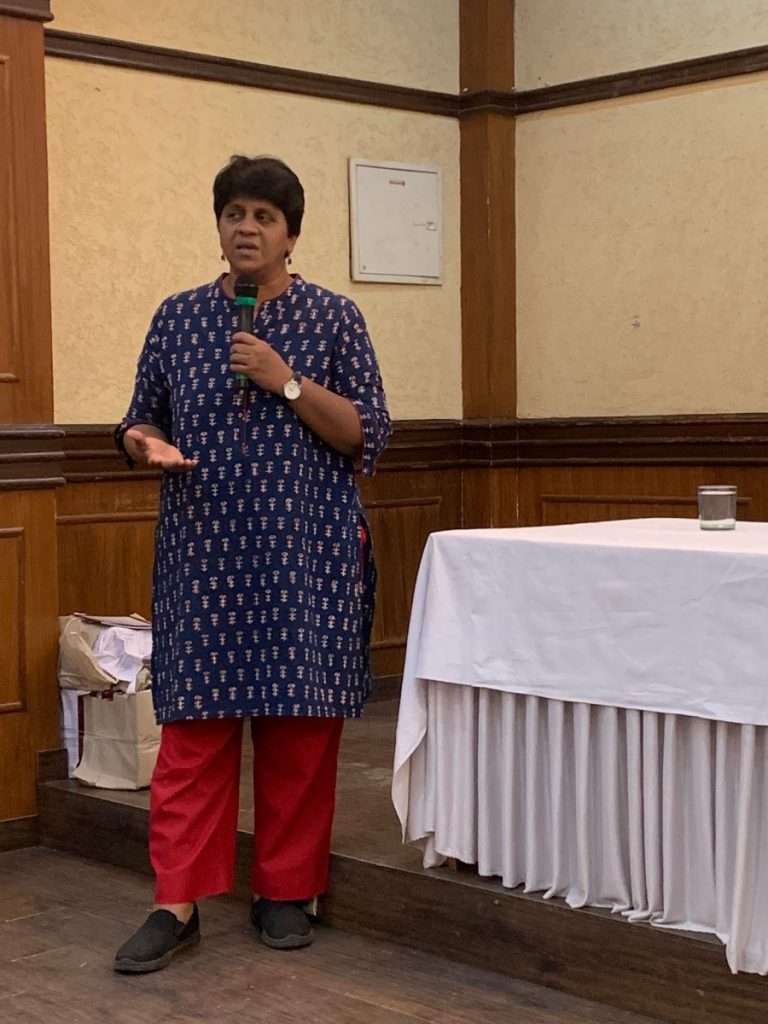 Hasina Khan of Bebaak Collective speaks at the press conference on March 27, 2019. Credit: The Wire

Talking about how incidents of violence have an adverse impact on socio-economic welfare of Muslim women, Fatima from Bihar said: “In the face of such extreme violence, the issues of Muslim women’s education, employment and health take a backseat, despite the fact that they remain urgent and necessary facets of life. Even while the Sachar Committee recommendations demonstrate the disproportionately low rates of education and employment among the Muslim community, and the policies exist to address this – there is no monitoring, or action taken by the current BJP-government. Muslims continue to be neglected in the country’s development project.”

The manifesto also points out how the total budgetary allocation for expenditure on minorities has shown a declining trend since 2012-13.

Hasina Khan of Bebaak Collective, which was among the petitioners who challenged the validity of the instant triple talaq case in the Supreme Court, said that the ruling government had strategically used Muslim women to polarise the community and criminalise the act of triple talaq through an ordinance.

“There is no doubt that the socio-economic conditions of Muslims were deplorable even before the current government came to power, but now the space to negotiate with the state through rights assertions or independent commissions has drastically reduced,” she said. “The constant vilification of Muslims, under the current BJP-led government, has led to virulent attacks against them.”