"Silence is no longer an option." New Delhi: Hundreds of people took to the streets in multiple cities across India to protest against the Modi government’s lack of action against the accused in the gang rape of an eight-year-old girl in Kathua, Jammu and Kashmir and of a minor girl in Unnao, Uttar Pradesh. A young woman holds up a sign at Sunday’s ‘Not in My Name’ protest against the Kathua and Unnao rapes. Credit: Karnika Kohli/The Wire

Despite the level of brutality in both cases, BJP leaders either unambiguously stood in defence of the accused or went out of their way to evade questions. After facing flak for his silence, Prime Minister Narendra Modi on Friday said, “The incidents of the recent days are a challenge to social justice. The incidents which have been in public discussion the past two days would be considered shameful by any civilised society. As a society and as a country we should feel ashamed.” 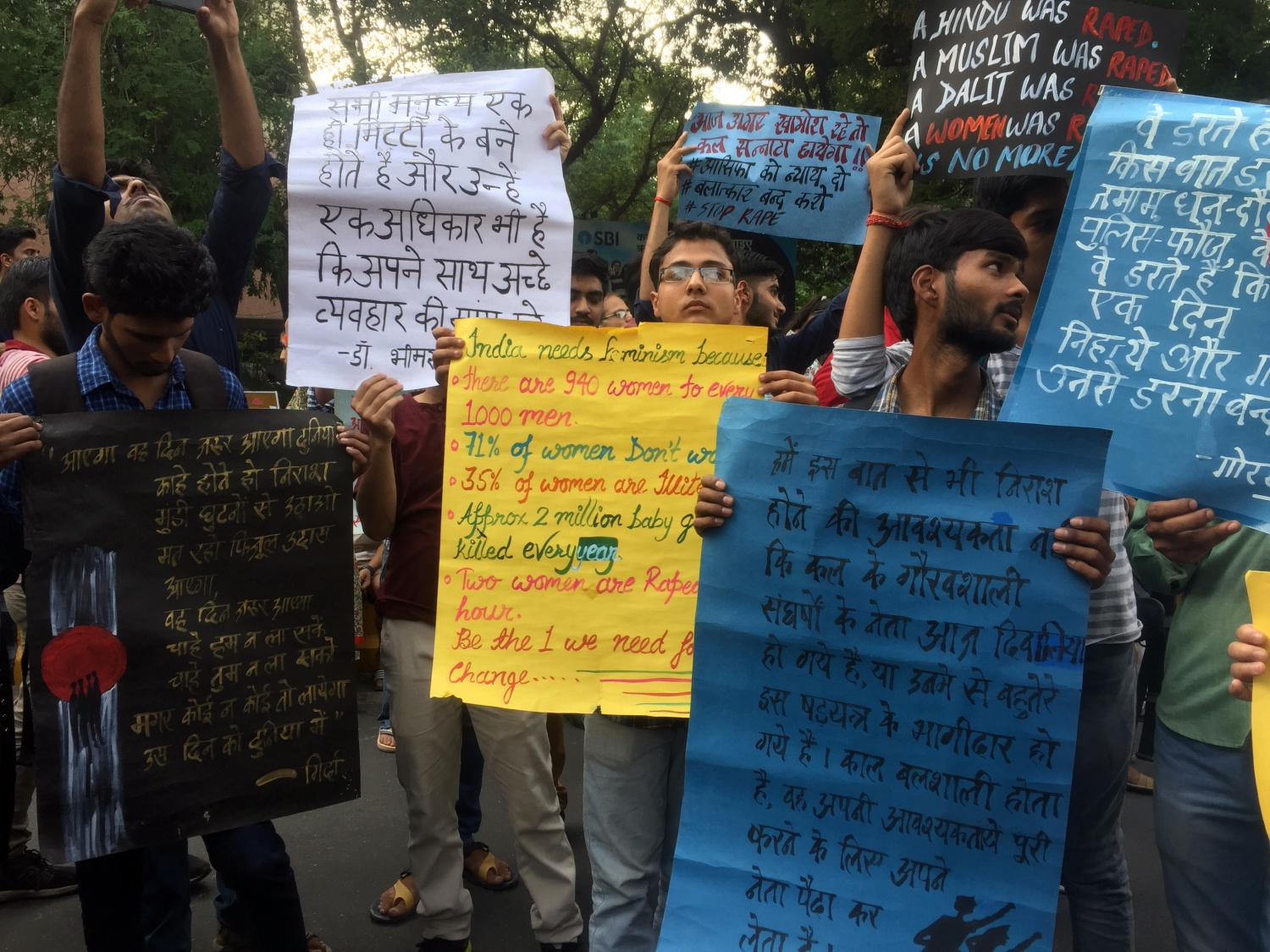 Curiously, Modi refrained from referring to Kathua or Unnao by name, adding that such incidents are an attack on human values regardless of the state or area they have occurred. In Kathua, policemen that were supposed to be investigating the case stand implicated, while a politician from the ruling BJP is the main accused in Unnao. “Now that all the accused in the Kathua case have been arrested and a detailed charge sheet filed, and it is up to courts to judge the matter, what does he mean by saying that none of the guilty in the crime would be spared? They have already been arrested and put in jail,” a former IAS officer wrote on social media. Credit: Karnika Kohli/The Wire

“The incidents of the recent days are a challenge to social justice. The incidents which have been in public discussion the past two days would be considered shameful by any civilised society. As a society and as a country we should feel ashamed,” Modi added. “The horses returned home, unable to tell/ How the gods died in a poisoned temple.” – from ‘The Nomad’s Daughter’, a poem by Manash Firaq Bhattacharjee. Credit: Karnika Kohli/The Wire

The protests in Delhi were organised under the ‘Not in My Name’ banner.

The organisers held similar countrywide protests in 2017 to raise their voice against increasing incidents of communal violence against minorities. 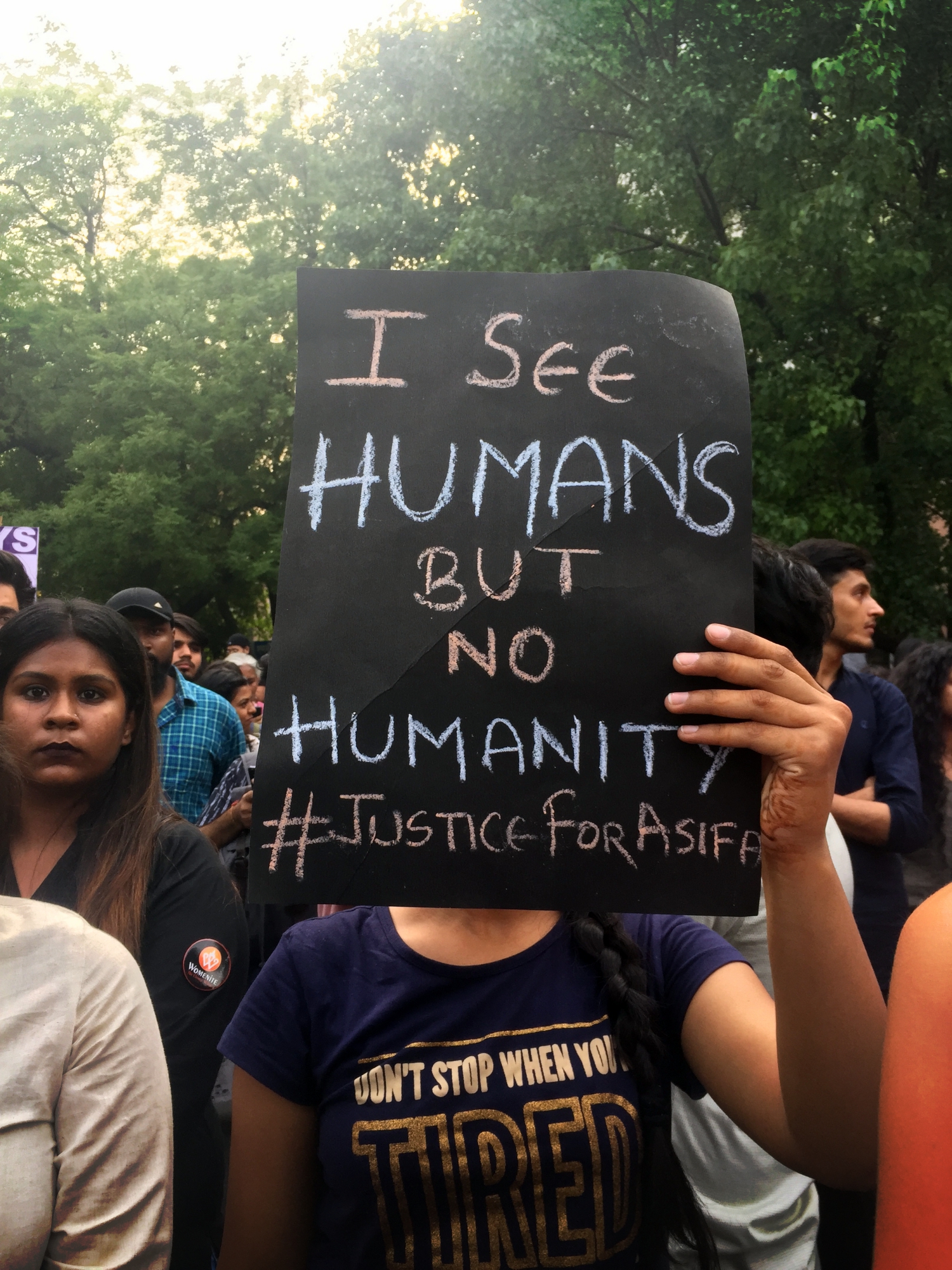 “Muslims live in fear of the shape of the next round of attacks, even as the rights of Dalits and adivasis enshrined in the Constitution are being questioned. And today, the impunity of those in power makes them defend the rape of women and even of an 8-year-old girl. Those in power shield raposts and take out marches to defend the brutal rape and killing of a child who was targeted simply because she was a Muslim,” it added. In Delhi, the protestors had four demands:

One, the immediate dismissal of the Adityanath government in Uttar Pradesh for protecting a rapist and for abetting the death in police custody of the father of the rape victim in Unnao.

Two, the immediate arrest of two BJP ministers who led rallies of the Hindu Ekta Manch in Kathua, for hate speech and creating enmity between people.

Pakhi Jain, in the 10th standard:

“We will have to raise our voices today, and parents please don’t stop your children. I know you are scared, in fact all of us are, but we are together, and it is us who have to live the future.” pic.twitter.com/IPGYhLtQag

Three, the immediete arrest of all Hindu Ekta Manch office bearers and leaders for hate speech.

And four, immediete security arrangements for all the families of the victims, and state support for arranging a competent prosecution team. 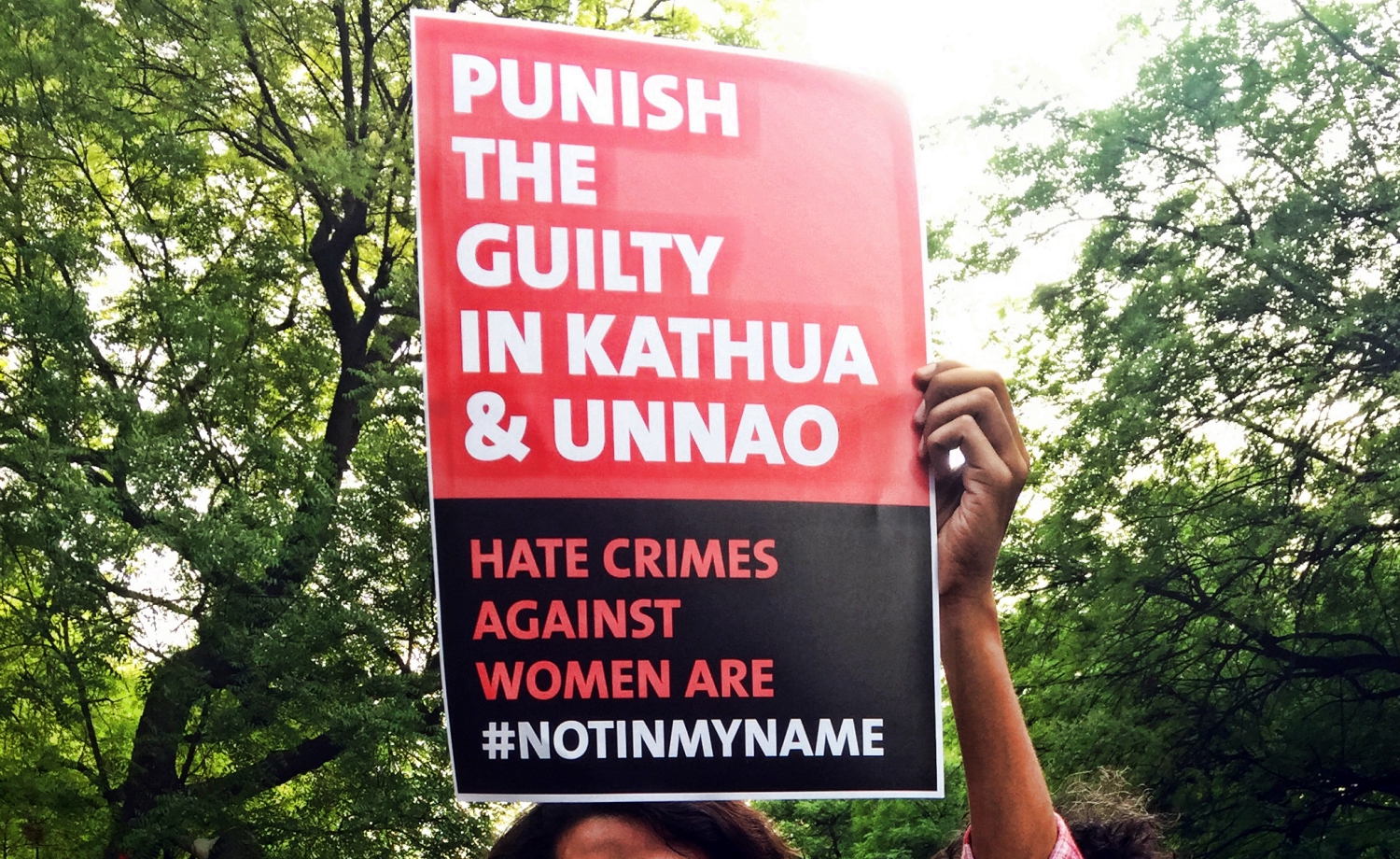 Meanwhile, the CBI made a second arrest in the Unnao rape case on Saturday as it detained the woman who allegedly took the victim to BJP MLA Kuldeep Singh Sengar on the day of crime. Holding him responsible for the “terrifying state of affairs”, 49 retired civil servants, in an open letter on Sunday, urged Prime Minister Narendra Modi to reach out to families of Kathua and Unnao rape victims to “seek their forgiveness”. “Given your supremacy within the party and the centralised control you and your party president exercise, you more than anyone else have to be held responsible for this terrifying state of affairs … We have had enough of these belated remonstrations and promises to bring justice when the communal cauldron is forever kept boiling by forces nested within the Sangh Parivar,” they added.

‘Credit goes to people of India, not Modi’

In a message on social media, another former IAS officer wrote that he was “stunned” by the news headlines, “PM Modi Silences Critics On Rape Cases, 2 Ministers Quit Soon After”. In fact, credit for the resignations of J&K Industries Minister Chandra Prakash Ganga and Forest Minister Lal Singh, and the arrest of Kuldeep Singh Sengar, the main accused in the Unnao rape case, “goes to the people of India, not PM Modi.”

Now that all the accused in the Kathua case have been arrested and a detailed charge sheet filed, and it is up to courts to judge the matter, what does he mean by saying that none of the guilty in the crime would be spared? They have already been arrested and put in jail. I would have still given him some credit if those ministers had been “dismissed” from the cabinet. But no, they were given a respectful exit through their “resignations”.

In the Unnao case … even the attempt of suicide by the rape victim in front of the chief minister’s residence didn’t wake up the PM. He maintained a studied silence in the hope that this too shall pass. But some enlightened citizens and lawyers filed a PIL in the Allahabad High Court which ordered Sengar’s arrest.