A case of domestic violence and dowry harassment has already been filed against Justice Nooty Rammohana Rao, his wife and son. 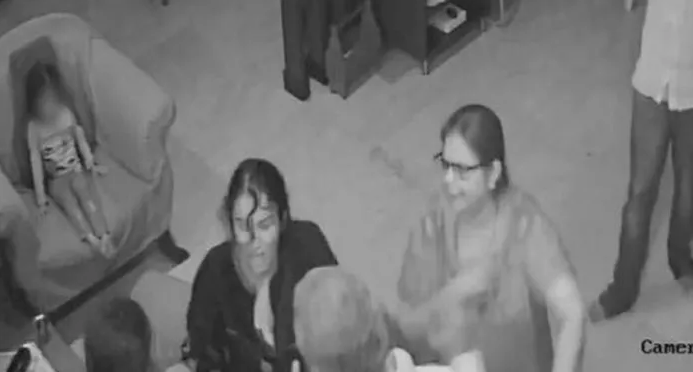 A screegrab from the footage. P

New Delhi: Shocking visuals of former Hyderabad high court judge Nooty Rammohana Rao and his family assaulting his daughter-in-law have emerged, strengthening the domestic violence and dowry case that has been filed against them.

Sindhu Sharma, who is married to Rao’s son Vasista, had already filed a complaint against her husband, the judge and his wife Lakshmi. The video’s timestamp indicates that the CCTV camera footage of the assault is from April 20. Sharma was admitted to a hospital in Hyderabad with injuries on that night.

She filed a police complaint on April 26, and the Hyderabad police registered a criminal case against the three accused on the same day.

Justice Ramamohana Rao was a judge in the Hyderabad and Madras high courts and retired in 2017.

The video shows all three accused assaulting her, even as Sharma’s daughters are in the same room. Sharma told The News Minute that her husband assaulted her frequently and demanded dowry.

On the night of April 20, she said she had to be rushed to Apollo Hospitals in Jubilee Hills because of the injuries she sustained. She told The News Minute that while the three accused were taking her to the hospital in a car, she was “verbally and physically attacked” again.

Sharma said the judge and his wife’s first concern at the hospital was to make sure that she does not tell the staff how she had sustained the injuries. “My mother-in-law kept yelling that I am mad and I needed sedatives. My clothes had been torn and I asked them to give me something to cover my body, they put a bed sheet on me,” she told The News Minute.

The hospital registered a medico-legal case on April 20, saying Sindhu had scratches over her chest on the left side, abrasions over her left breast and upper lip, and bruises over her right shoulder and her right forearm.

The police said that while Sharma had already informed them about the nature of the assault, the footage will serve as documentary evidence to bolster the case. A lawyer for Sharma said that the police may now add charges of attempt to murder against the accused.

Bizarrely, the judge and his family have denied the allegations, claiming that the altercation occurred after Sharma tried to take her own life. The family was “scared” that she would harm herself and her children, and tried to “restrain” her, sources told NDTV. Sharma had tried to kill herself once before, the family claimed.

Sharma told the media that though she had accessed the video footage earlier, she had not released it in the hopes of reaching a settlement. She said she wanted her children to have their father’s care also and decided to release the visuals only after Vasista sought a divorce.

After the police case was filed against the accused, Sharma had demanded custody of her children, both girls, aged about 4 and 2. While the younger daughter was handed over to the mother by the judge’s family, the high court awarded custody of the elder daughter after she filed a habeas corpus petition.

Media reports said that Sharma’s father had offered cash and gold as dowry to the accused family at the time of the wedding. “However, during the last few months, the in-laws have been harassing her demanding additional dowry. As the complainant and her parents refused to pay more, they started to assault her,” one report said.