Amidst Protests, Erdogan Pulls Turkey Out of European Treaty on Violence Against Women

Called the Istanbul Convention, it had pledged to prevent, prosecute and eliminate domestic violence and promote equality. 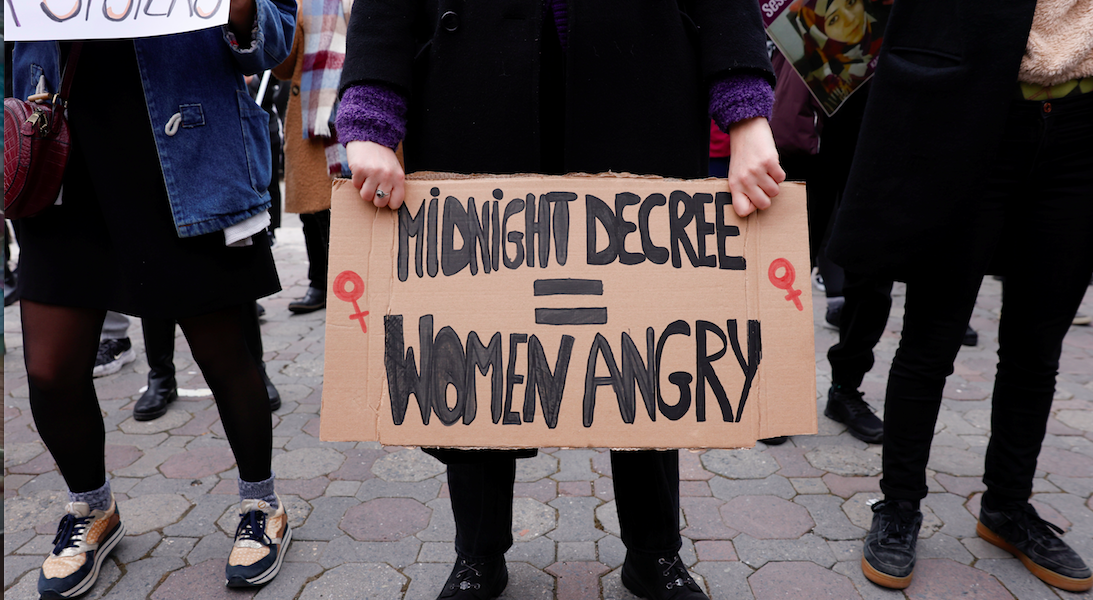 Activists hold placards during a protest against Turkey's withdrawal from Istanbul Convention, an international accord designed to protect women, in Istanbul, Turkey March 19, 2021. Photo: Reuters/Umit Bektas

Ankara: President Tayyip Erdogan pulled Turkey out of an international accord designed to protect women, the government said on Saturday, prompting protests and criticism from those who said it was necessary to tackle rising domestic violence.

The Council of Europe accord, called the Istanbul Convention, pledged to prevent, prosecute and eliminate domestic violence and promote equality. Turkey signed it in 2011 but femicide has surged in the country in recent years.

No reason was provided for the withdrawal in the Official Gazette, where it was announced in the early hours on Saturday. But top government officials said domestic law rather than outside fixes would protect women’s rights.

The convention, forged in Turkey’s biggest city, had split Erdogan’s ruling AK Party (AKP) and even his family. Last year, officials said the government was mulling pulling out amid a row over how to curb growing violence against women.

“Every day we wake up to news of femicide,” said Hatice Yolcu, a student in Istanbul, where hundreds of women carrying purple flags marched in protest at the withdrawal.

“The death never ends. Women die. Nothing happens to men,” she said.

“This move is a huge setback … and all the more deplorable because it compromises the protection of women in Turkey, across Europe and beyond,” she said.

Some are also hostile to the Convention’s principle of gender equality and see it as promoting homosexuality, given the pact’s non-discrimination on grounds of sexual orientation.

“Preserving our traditional social fabric” will protect the dignity of Turkish women, Vice President Fuat Oktay said on Twitter. “For this sublime purpose, there is no need to seek the remedy outside or to imitate others.”

Critics of the withdrawal have said it would put Turkey further out of step with the European Union, which it remains a candidate to join. They argue the convention, and related legislation, need to be implemented more stringently.

Germany said Turkey’s decision sent the wrong signal. “Neither cultural nor religious nor other national traditions can serve as an excuse for ignoring violence against women,” the foreign ministry said.

Turkey does not keep official statistics on femicide.

But the rate roughly tripled in the last 10 years, according to a group that monitors femicide. So far this year 78 women have been murdered or died under suspicious circumstances, it said.

World Health Organization data shows 38% of women in Turkey are subject to violence from a partner in their lifetime, compared to 25% in Europe.

“Shame on this bigotry, patriarchy, heartlessness that protects bullies and murderers instead of women,” Turkish author Elif Safak said on Twitter of the withdrawal.

Turkey is not the first country to move towards pulling out of the accord. Poland’s highest court scrutinised the pact after a cabinet member said Warsaw should quit a treaty that the nationalist government considers too liberal.

While critics say his government has not done enough, Erdogan has condemned violence against women and said this month it would work to eradicate it. Ankara has tagged violent men and launched a smartphone app for women to alert police.

Erdogan’s decision comes after he unveiled judicial reforms this month that he said would improve rights and freedoms, and help meet EU standards.

Talks over Turkey’s membership in the bloc have been halted for years over policy differences and Ankara’s record on human rights.