The 22-year-old's death in custody of the 'morality police' have brought many women to the streets, burning hijabs in protest and calling for the country's laws on women's dress to be rescinded. 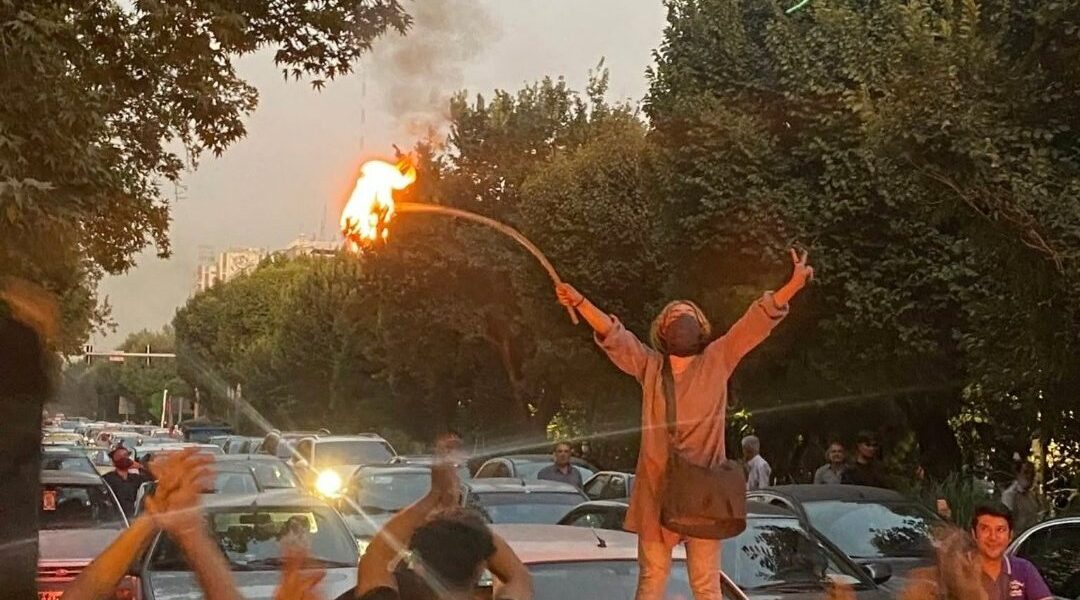 A viral photo of a protester in Iran burning her hijab in public. Photo: Twitter.

New Delhi: Protests in Iran continued for the fifth straight day on Tuesday, September 20, against the reportedly heavy-handed actions of ‘morality police’ in the West Asian nation against women protesting the country’s strict dress code which forces women to cover their heads.

In recent months, rights activists in the nation have been urging women to protest the dress code by removing their veils in public, an act which is likely to lead to their arrest by the authorities.

After the death in custody of 22-year-old Mahsa Amini on September 16, protests have continued to escalate and spread across the country, with women taking to the streets to burn their hijabs in defiance.

Amini was taken into custody by the police for not wearing her hijab “properly”. Hours after her arrest, she is said to have collapsed in custody and was taken to a hospital. Amini died in hospital after being in a coma for three days. Police deny Amini was mistreated, claiming she died of a heart attack. But her family says she had no record of illness and was in perfectly good health when she was arrested.

According to DW, photos began doing the rounds of Amini on a hospital bed with swollen, black eyes and blood running from her ears. Further, the Kasra Hospital, where Amini was admitted, said in a statement on Instagram that she had been brain-dead on arrival. However, the statement was later deleted.

In a phone call with Amini’s parents, Iranian President Ebrahim Raisi promised a full investigation into her death. Judicial and parliamentary investigations have been ordered as well.

Protests erupted at her funeral the day after her death with the police firing teargas to disperse the crowds, culminating in a spate of arrests. According to DW, five protesters are thought to have been killed in Kurdistan so far.

Following Amini’s death, the hashtag #MahsaAmini began trending and social media was inundated with posts expressing support for her and challenging what one Iranian journalist referred to as the country’s “gender aparthied” regime. Visuals were shared of women gathering in Kurdistan, Amini’s home provinces, as well as other parts of the country, such as capital Tehran.

This is Iran today. A woman proudly burning the most visible symbol of religious dictatorship; compulsory hijab.
Hijab police killed #MahsaAmini but now there are millions of Mahsa in Iran who are shouting NO to Forced hijab NO to gender apartheid regime.#مهسا_امینی pic.twitter.com/9tzd9IRwgB

Women have been sharing videos of themselves and other women being confronted by clerics for refusing to wear the veils in public, hurling insults and threats.

Do you remember these 13 brave women fighting against these Mullahs in iran for not wanting to wear hijab?
Now they are all in frontline of the protests but not alone. All united due to murder of #MahsaAmini pic.twitter.com/vbbAjr0Avy

The scenes in Iran are astonishing. How far will these protests go?
pic.twitter.com/AJeHB0yyYB

Everybody cries
Everybody breathes
Everybody wants to feel they’re free
Deep inside I know what I am worth
A LIFE OF MY OWN#MahsaAmini#مهسا_امینی @FFDP pic.twitter.com/9JQb4wpfZW

However, attempts were ostensibly being made to curtail this social media mobilisation as London-based rights watchdog Net Blocks highlighting internet blockages on in Sanandaj, the capital of the Kurdistan province.

⚠️ Confirmed: Real-time network data show a near-total disruption to internet connectivity in #Sanandaj, the capital of Kurdistan Province in west #Iran; the incident comes amid widening protests over the death of #MahsaAmini after her arrest by morality police 📉 pic.twitter.com/wZVHJjgpiR

As pressure mounts on Tehran to conduct impartial investigations into Amini’s death, foreign diplomats and members of international organisations have joined the chorus of voices calling for justice and accountability.

The UN’s acting high commissioner for human rights, Nada al-Nashif told the BBC that the allegations against the Iranian authorities of the torture and ill-treatment of the slain 22-year-old must be “promptly, impartially and effectively investigated by an independent competent authority”.

Nashif also noted how in recent times, “verified” videos of violence against women for wearing “loose” or “improper” hijabs have emerged and stressed that authorities should stop arresting women who do not abide by the rules, further calling for the rules to be repealed altogether.

In a statement being shared on Twitter, a Human Rights Watch researcher noted that “lethal” action against protesters serves to reinforce the “systemic nature of government rights abuses and impunity” and as such, called for the abolition of the morality police and for laws regarding women’s dress to be rescinded.

After a 22-year-old woman died in the custody of #Iran‘s morality police, authorities are now cracking down on protests, including apparently using lethal force. See @hrw quote from #Iran senior researcher @sepehrifar on this: https://t.co/ccY5KYJF3l #MahsaAmini pic.twitter.com/ZgwsLHXB1B

On Tuesday, German foreign minister Annalena Baerbock, on the sidelines of the UN General Assembly in New York, said Iranian authorities should listen to the protesting women, saying that they were “demanding rights that all people should have,” according to Reuters.