In War-Ravaged Kabul, Women Throng Parks for Peace and Picnics

In recent years, more than half a dozen of Kabul's gardens and parks have been restored or are being upgraded, with a focus on making them safer and more accessible to women

A group of girls pose for a picture in Chihilsitoon Garden, which was restored after it was damaged during four decades of war in Kabul. November 6, 2019. Photo: Thomson Reuters Foundation/Rina Chandran

Kabul: The sound of women laughing and singing in public is rare in Kabul, where four decades of war have left a population anxious and on edge as they go about their daily lives – except on Wednesdays when hundreds of Afghan women head to the parks.

In recent years, more than half a dozen of Kabul’s gardens and parks have been restored or are being upgraded, with a special focus on making them safer and more accessible to women.

“There are very few public spaces in Kabul where women are safe from harassment, so we like to come to the gardens,” said Salma Mohamedi, a high school student who had skipped classes to hang out with her girlfriends in Chihilsitoon Garden, which admits only women and families on Wednesdays.

“The security situation in Kabul is not so good, and many places are not safe. But it is peaceful and secure here, and we can be ourselves,” she said, as her friends played a game of catch on the grassy lawn, shrieking with laughter.

More than 75% of Kabul is informally settled, so there are few public places, and fewer still that are women-friendly, said Frozan Abdullah at UN-Habitat’s Afghanistan Urban Peacebuilding Programme that works with communities and authorities in eight cities.

The settlements agency is renovating some neighbourhood parks as part of a programme to upgrade informal settlements and is conducting the first audit of 60 public spaces in Kabul.

The survey, to be published next year, gauges how safe residents feel in public spaces, and includes an inventory of facilities such as benches, streetlights, toilets and security guards to assess how women-friendly they are, said Abdullah.

“Decades of war have led to depression, anxiety, and other physical and psychological problems, particularly among women as they are largely housebound,” she said.

“They also faced harassment, and a lack of facilities such as separate toilets and adequate lighting,” she added.

Forty years of war, from the 1980s’ Soviet occupation to internal fighting and the war against the Taliban, destroyed much of the city of Kabul, wedged in a narrow valley between the Hindu Kush mountains. 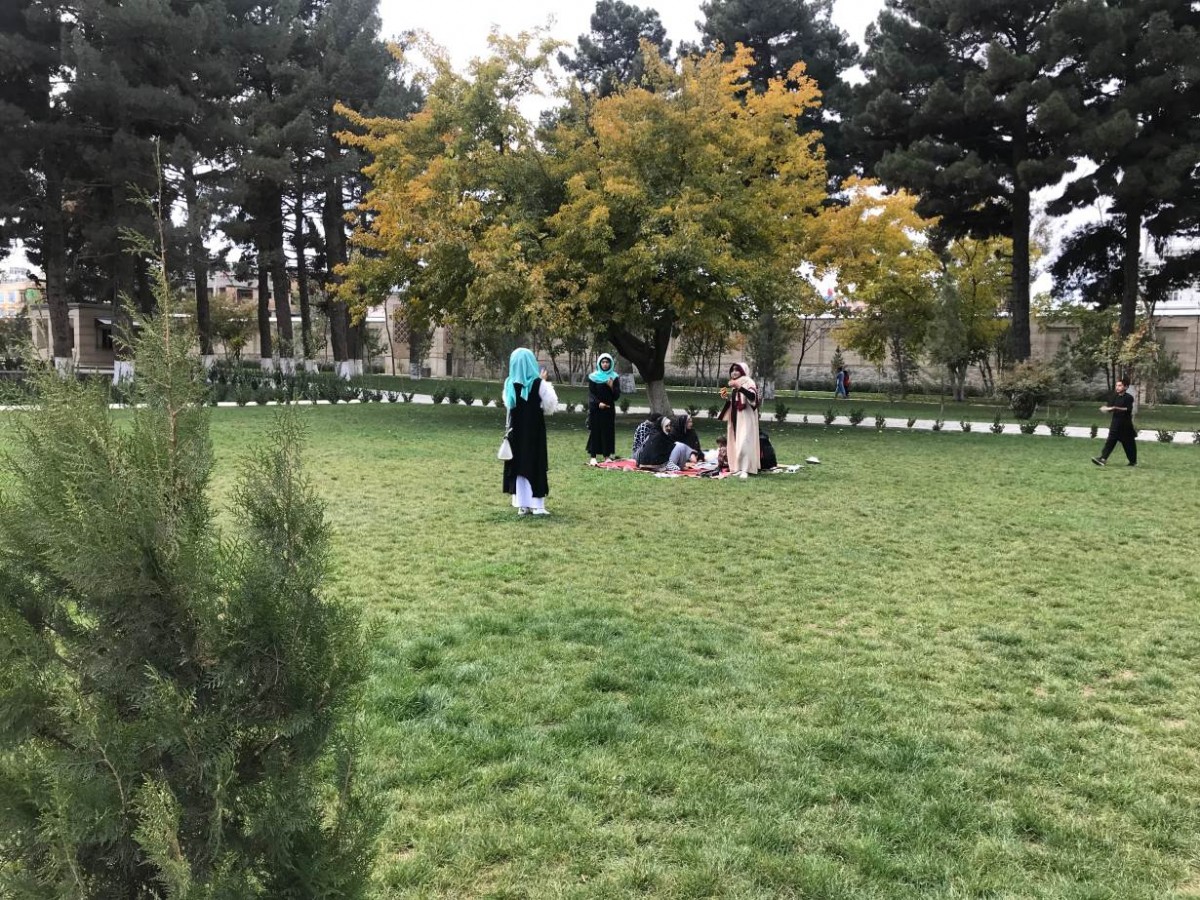 A family enjoys a picnic in Chihilsitoon Garden, which was restored after it was damaged during four decades of war in Kabul, Afghanistan. November 6, 2019. Photo: Thomson Reuters Foundation/Rina Chandran

While rebuilding damaged infrastructure took precedence after the fall of the Taliban in 2001, plans were also made to restore Kabul’s once famed gardens – not just as much-needed green spaces, but also to heal pent-up anxieties, said Abdullah.

Recent research has shown that time spent in parks results in less negativity among city residents.

But across Asia, cities are losing green spaces at a fast pace as a construction boom gobbles up land for offices and apartments, worsening the effects of rising temperatures.

In Chihilsitoon Garden, women sat on benches and read books, families spread out picnic lunches, and a rowdy group of girls sang at the top of their voices and posed for selfies.

The 12.5-hectare park, Kabul’s biggest historic public garden, was heavily damaged in fighting in the 1970s and ’80s. It lay in ruins until the non-profit Aga Khan Trust for Culture (AKTC) took over its renovation in an agreement with the city.

Its restoration followed AKTC’s upgrade of the 16th century Bagh-e-Babur, or Babur’s Gardens, where the first Mughal Emperor Babur is buried. The 11-hectare walled and terraced expanse now draws hundreds of thousands of visitors every year.

The Chihilsitoon Garden renovation was completed last year, and included upgrades to the surrounding neighbourhood where a busy market is located, and jobs in construction and restoration for residents, according to AKTC.

“These parks and gardens are important social spaces. For a war-torn society, these gardens can help heal the wounds and scars in the human psyche as well as in the urban fabric of the city,” said Luis Monreal, general manager at AKTC.

During their strict Islamist rule from 1996-2001, the Afghan Taliban banned music and movies and kept women from education, voting, and most work. Women were not allowed to leave their homes without permission and a male escort.

After the Taliban rule, women still hesitate to go by themselves to a park, so it helps to have adequate facilities, and designated days, said Abdullah of UN-Habitat. 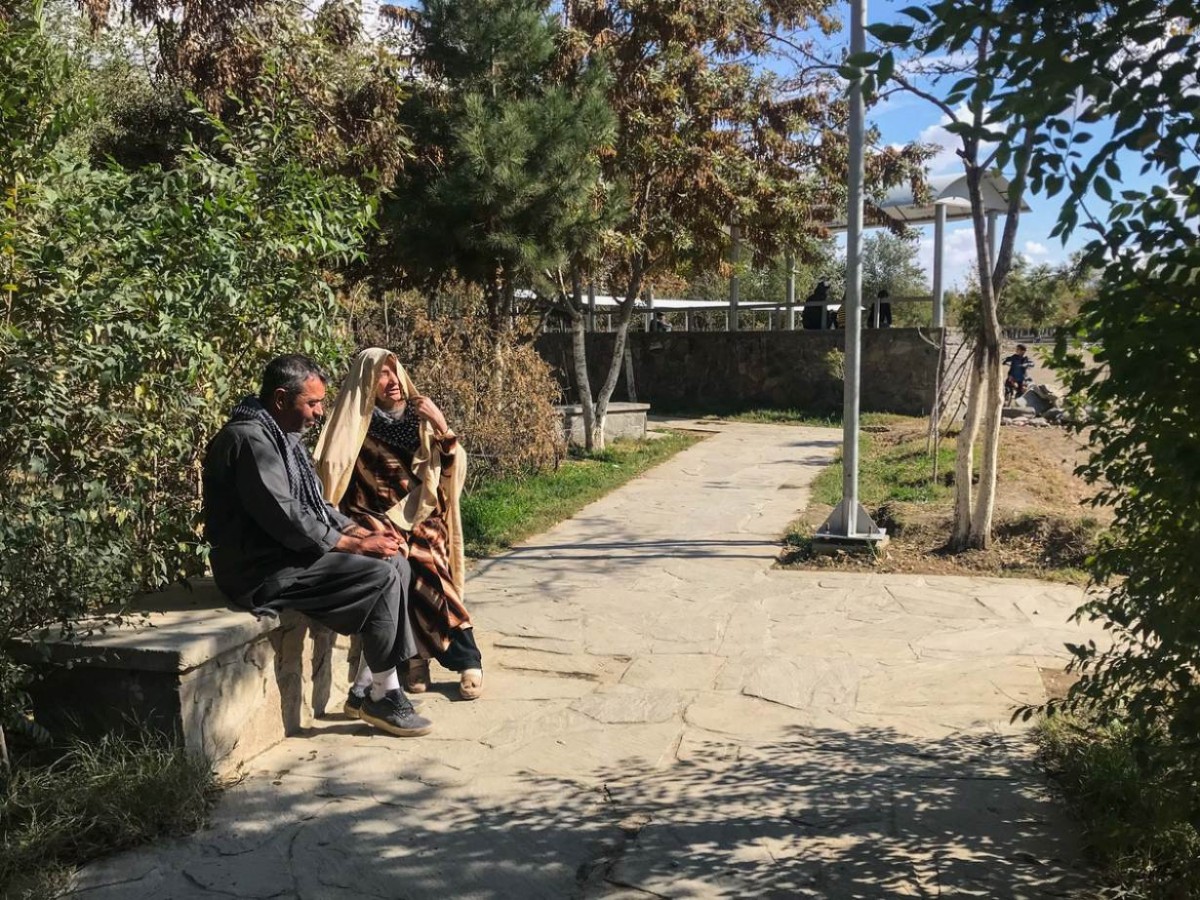 A woman and a man sit on a bench in a park that is being upgraded with wider footpaths, more lights and seating areas as part of a programme to make public spaces safer and more accessible for women in Kabul, Afghanistan. November 6, 2019. Photo: Thomson Reuters Foundation/Rina Chandran

“Otherwise, you will only see men in the parks. But women are just as entitled to recreational opportunities and open spaces in the city,” she said.

The audit of Kabul’s public spaces is part of a worldwide recognition that the urban planning process often ignores women’s inputs, which results in spaces that exclude them.

So-called gender mainstreaming in urban planning not only makes public spaces more inclusive but also has a favourable effect on women’s safety and wellbeing.

Cities such as Vienna have incorporated the principles with wider pavements, additional seating and barrier-free access to accommodate strollers.

In Kabul, there has been a concerted effort to open up more public spaces to women: Bagh-e-Zanana is the city’s only women’s garden, which doubles up as a marketplace for women.

Earlier this year, a local cinema began holding weekly women’s-only shows, with a day for families, as well.

Such initiatives are critical for greater inclusiveness in the city, said Kabul Mayor Ahmad Zaki Sarfaraz.

“The safety and security of women and children are very important, and our plan is for a gender-based development of Kabul city,” he told the Thomson Reuters Foundation in his office.

The city’s new development framework provides more spaces for women including markets and parks, as well as improved public transportation networks to enable easier movement and greater access to jobs and the community, he said.

“We want to encourage women to come out of their homes, walk on the streets, go to the parks and markets, and have access to all city facilities in a safe and secure manner,” he said.

For Mohamedi and her friends at the Chihilsitoon Garden, being able to spend time in the outdoors without having to worry about their safety is a good start.

“For a few hours, we do not need to think about being careful, about being harassed,” she said.

“Here, inside the garden, Kabul is pretty and safe for us.”

The article was originally published on Thomson Reuters Foundation. You can read it here.