In Odisha, A Workforce of Women With a Near-Impossible Mandate

Though they are the backbone of India’s child development programme, there isn’t enough interest in understanding anganwadi workers themselves – what drives them, their challenges and what can be done to fully unleash their potential.

“How many anganwadi workers have you met”? When I posed this question to the APPI team in Odisha – one that has been set up to help the state government improve nutrition outcomes for its children, the answer was “not many”.  Most of them had seen these anganwadi women only in training centres.

To my mind, knowledge that was high-level and top-down was going to be inadequate if we, as a foundation, were planning to devise programming that would impact the lives of millions of children in Odisha.

Instead, we thought, what if we went in and spent time on the ground, inside the system, and with the frontline anganwadi workers (AWWs) – the primary agents of change when it comes to nutrition. Would our worldview change? Could we watch and learn ground-up, and see what emerged as possible (and probably, better) ideas for nutrition-related programmes in the state?

The anganwadi system forms the backbone of the country’s ICDS

With a workforce of 1.4 million women and a 2018-19 budget allocation of Rs 16,335 crore, the anganwadi (AW) system forms the backbone of the country’s Integrated Child Development Services Scheme (ICDS) – the world’s largest community-based programme for child development. The state of Odisha itself has more than 130,000 anganwadi workers (AWW) and AW helpers (AWH).

This is a cadre made up entirely of women: the AWWs, the helpers, supervisors and district Child Development Protection Officers (CDPO). Yet at a state and national level, the AWW is an abstraction: the women are just faceless numbers, or at best cogs in the wheel that keep the ICDS running. There isn’t enough information or interest in understanding what makes them tick, what their lives and work look like, and what can be done to motivate and galvanise our largest cadre of barefoot workers.

Muniguda block in Odisha – where we spent 20 days as a result of our decision to spend time in the field – has 174 anganwadi workers and 174 anganwadi helpers. It’s easy to recognise these women – AWWs wear a red saree with a yellow border while the helpers’ sarees are blue with white borders.

Also read: During West Bengal’s Naxalbari Movement, Women Were Not Merely in the Background

If you are in the block, you can see the women through the day – going into the centre, going back home.  Some take buses, for some, their husbands drop them to the centres, some walk the long distances while yet others come from next door.

The government has specific guidelines for these AWWs – for instance, one task should take you two minutes; another, five minutes. There are various ‘days’ that have to be organised and specific functions that must be performed. On certain days eggs have to be given to the children, on another day, vaccines; on a third day, babies have to be brought to the centre to be weighed. Then there are ‘meeting days’ – when they must go to the meeting centres, do home visits and meet pregnant and lactating women. It’s an impossible schedule.

And if this is not enough, AWWs have now been tasked with additional responsibilities – early childhood education (ECE), where they are expected to teach their young wards, and self help group (SHG) formation and training – neither of which they were recruited or trained for. 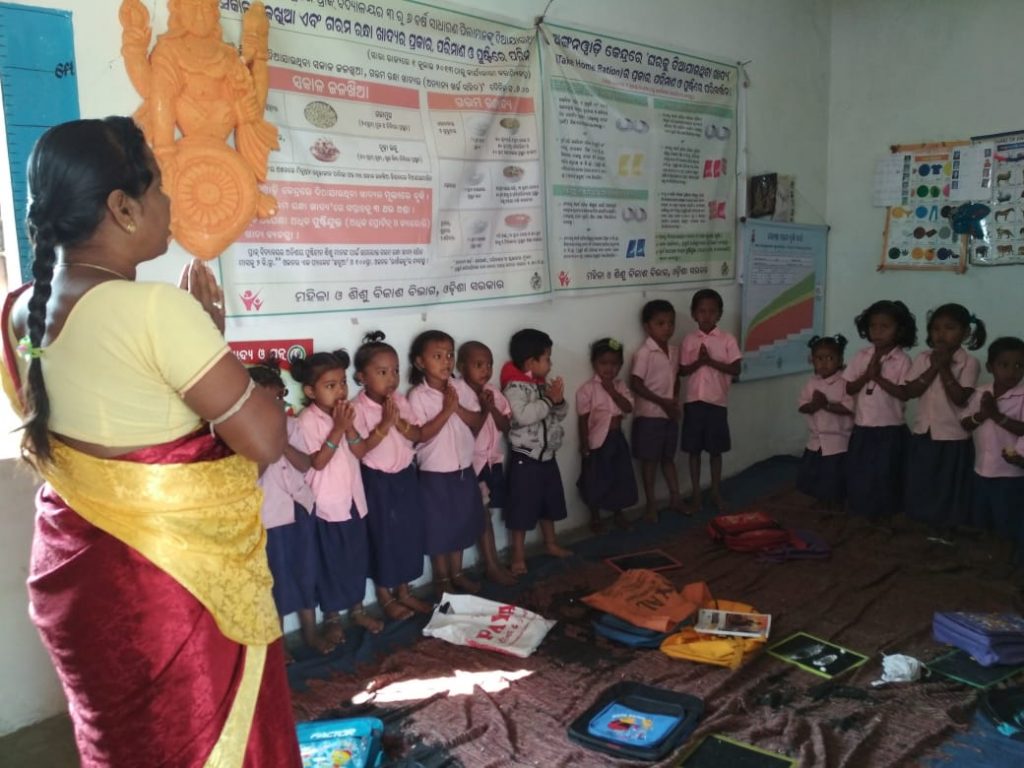 Watching them at work

The various elements of the AWWs schedule and activities are entered in paper-based registers. Each woman carries 13 of these registers – each 50 pages thick and with hundreds of  fields of data that needs to be captured, tracked and recorded. It ranges from measuring the children’s height and weight, tracking their food intake and training the new mothers, all the way to undertaking ECE activities, administering surveys and conducting awareness programmes.

These registers, which are filled manually, are the lifeblood of an AWW – the only proof of their performance in a system that has given them multiple roles, but still sees them merely as data collectors. And even the most illiterate of the AWWs know this and guard these books. They are carefully kept – in most centres they are locked up in steel almirahs, so that the rats don’t get to them. It’s also the first thing they show you when you visit the – aap register dekhna chahte ho?

Every month all the AWWs in one cluster shut down their individual centres for the monthly sector meeting. This meeting is for them to review the month and consolidate the detailed data they collect in their multiple registers. Each sector comprises 30 AWWs, and has one supervisor.

The AWWs are required to fill out a monthly performance report (MPR) – this is data that they have to transfer from their registers onto the MPR form, which in turn is sent to the district office. Given the amount of data that is asked of them and its complexity, this one-day sector meeting is not enough; so, they have a ‘pre-sector’ meeting to make up and consolidate this data.

This pre-sector meeting is now an institution in its own right. This is when, what we Indians call ‘group study’ happens. It’s a wonderful atmosphere – all the women gather in their red and yellow sarees in one of the centres. They sit around in circles and there is a fair amount of chatting. Some of the women know how to fill the forms, many don’t. Different groups are filling different forms from different registers; clearly this is a problem – the lack of accurate data, and a well-recognised one at that.

In Bhubaneswar, this problem is seen as one where you get data that is unanalysable, doesn’t tell you anything useful, and is not accurate. To those in power, the solution is a digitised MIS. Even under the National Nutrition Mission (NNM) the proposed solution to this problem is CAS (Common Application Software), which is a frontline worker (FLW) digital platform that aims to improve efficiency, provide real-time monitoring, and support FLWs with their work.

The vision is that every AWW will get a tablet where she will enter the data in real-time. There are other hopes for it as well – that it will introduce checks and balances that will ensure accurate data recording and collection. If for instance an AWW is visiting a pregnant or lactating mother, she will have to show a video to the mother before she’s allowed to enter data about the mother.

The problem though is that many of the women we met don’t even know how to use regular feature phones; all they can do is answer a call. But when they are asked via an IVR message to press one, very few can do it; leave alone working with smartphones and tablets.

Focusing on purpose, rather than protocol

Despite the deterrents – the unreasonable workload, the low salaries, the indifference of the state apparatus – the AWWs have a sincerity that is something else. When they get together for their pre-sector meeting, they pray, they sing; there’s a quality of seriousness and earnestness.

In our many conversations with them, you could see that they are trying to do something, they are quite open about their difficulties and they don’t cover up their faults.

They work on contract at Rs 6,000 per month; some of them have been doing this for 30 to 40 years; they grow old in the job. What’s amazing is that none of them have become cynical. If at all, they shower a lot of affection on the children.

If you look at it from Bhubaneshwar however – where the decisions makers sit – the AWWs are seen as people who need to be controlled, managed, monitored, disciplined, trained and demanded from; they are not seen as a workforce that can be motivated to deliver its best. 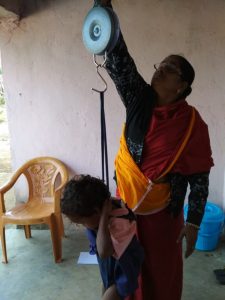 This is a cadre of only women, every single one of them: the AWW, the helpers, supervisors, district Child Development Protection Officer (CDPO); and we as a nation, should be proud of an institution like this. But we aren’t taking sufficient advantage of this all-women cadre. All the things they say about women being more responsible about families, society and development, you can see it play out here, but the system isn’t recognising this and designing for it.

Seeing them work, we wondered if there was any way in which this whole attempt at ‘building their capacity’ could look past the traditional technical training that they usually receive, and instead humanise them, give them dignity, and help them discover their purpose.

What if they could be enabled to articulate a mission for themselves and go about implementing it in a non-hierarchical setup? This is not a far-fetched idea. When you meet these women, you realise it’s possible to evoke purpose and meaning – it’s not far from where they operate from currently. And it’s far more effective than the current approach that is foisted on them – go to a training centre, learn this, do that.

Having spent 20 days learning from the AWWs, we tried some experiments: Our first idea was the IVR mechanism. However, this seemed far too difficult for the women, who were confused with following even simple instructions like ‘press one’.

We then thought – what if we tried a simpler, more traditional system. What if we set up a local call centre in Muniguda, with two local tenth standard pass girls, who would then call these AWWs every day and ask them to recite the data – have you given eggs today? How many? Have the mothers come? How many children have come in?

We know that the quality of data would be as poor as that recorded manually, but at least it would be digitised. The pre-sector meetings and time spent would be eliminated, data analysis would be easier, and, you could actually use the sector meetings to look at the data.

When we tested this with the AWWs, they were suitably enthusiastic about this incoming call mechanism versus the ‘press one, press two’ model.

The second pilot focused on attempting to improve the quality of a particular activity being undertaken. In some of the villages we went to, there was a nonprofit that trained shiksha didi who helped the AWW by focusing on ECE. We thought that maybe we could have a nutrition didi who would focus on mothers and pregnant women outside the AWC since most of the incidence of malnutrition happens in the 0-2 years group and usually outside the AWC. If the AWW had an assistant whom she could supervise, and that person had a routine, then the work stipulated in the guidelines would get done.

We believe there might be merit in applying this ‘immerse-watch-learn’ approach to other front line cadres as well, be it ASHAs and ANMs for health, small farmers in agriculture, or even teachers in education. And that the process of field immersion, learning from the frontline workers and harnessing their knowledge and acumen, might lead us, at APPI, to think of more ‘real’ ground-up solutions, versus the top-down ‘strategic’ solutions that seems to have become the norm.

This article was originally published on Indian Development Review. Read the original article.