In India, the Female Body Is a Territorial and Political Battleground

Rape and the disciplining of the female form are standard weapons of war, and Kathua is war. Apart from a war over resources and belonging, this is centrally a war over what it is to be human, and a woman. 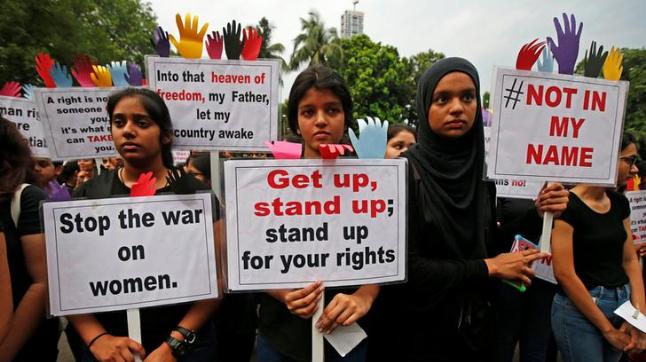 In Kathua, and the India it shines a light on, the right to a dignified life for every human is a pipe dream. Credit: Reuters

The brutal rape and murder of an eight-year-old girl in Kathua confronts us with a battle for the ‘Idea of India’. On the one hand are the beliefs that seem to have driven the alleged perpetrators, and on the other, the growing voices of those saying enough is enough.

The official chargesheet filed by the Jammu and Kashmir Police tells us a sordid tale about the motivations of the accused: a retired government official, a serving police officer, and two young men associated with them. In the kidnapping, raping and killing of a child, the retired official was operationalising a “plan to dislodge the Bakarwal community from Rasana area… in pursuance to that he made… an SPO in Police Department and [the other accused] part of [the] conspiracy and assigned them tasks.”

The chargesheet further suggests that the former official, Sanji Ram “was against the settlement of Bakarwals in Rasana Kootah, and Dhyamal area, and always kept on motivating the members of his community… not to provide land for grazing or any other kind of assistance… Accused Tilak Raj and Deepak Khajuria also had some serious issues with Bakarwals over the land occupation and crop damage being residents of the same area… during the investigation, it transpired that a particular community had a general impression that the Bakarwals indulge in cow slaughter and drug trafficking and that their children were turning into drug addicts.”

To boot out the apparently land-occupying, cow-slaughtering, immorally drug-addicted Bakarwals, some presumably more moral folk of Rasana made an ominous talisman out of one of their daughters – by drugging and slaughtering her. As they say, cows (bless them) are more secure in India than women and children.

The fight for territorial control

Pastoral and other mobile populations have long been looked down upon by settled communities. The development associated with the latter, say in the form of modern, sedentary agriculture, is held in contrast to the supposedly unpredictable movements of the former. Add to this the difference in religion and custom, and we have a potent mix.

In this mix are big questions of resource ownership and use, political territory and belonging and citizenship in India. Territory lends identity to the state and the ‘legitimate’ populations who reside within it. But territory, like notions of legitimacy and rightful belonging to a place, is not static. Modes of inclusion and exclusion, fencing out and letting in, border control and social othering, labelling and maligning, constantly produce and reproduce territory. As territory is demarcated, so are those who belong and those who do not.

The making of boundaries through territorial control seeps into the everyday, taking away even that which is legally sanctioned. The Kathua chargesheet tells us the accused challenged registered sales of land to the Bakarwals. News reports suggest this denial of rights to land and resources reached an extreme when the murdered child was not allowed to be buried in a local community graveyard.

Warring over the female form, and real and imagined ‘others’

Kathua showcases the deployment of the female body as a territorial and political battleground. Rape and the disciplining of the female form are standard weapons of war, and Kathua is war. Apart from a war over resources and belonging, this is centrally a war over what it is to be human, and a woman.

On one side of this aggression is the seemingly pure, moral Hindu, who diligently tills the land, or works for the government and its security forces, and seeks to live in peace (with and for himself). Women are put on a pedestal in this idyll. They are Bharat Mata, to be revered and protected by the muscular male in theory, while often being infantilised, exploited, harassed for dowry, and even killed in practice. Painful realities aside, ideals of righteousness where men reign supreme feed on a steady supply of real and imagined ‘others’.

In Kathua, apart from allegedly backward, resource-grabbing, Muslim pastoralists, are further others. In the alternative ‘facts’ that have circulated after the case gained national attention, we are told to not believe the chargesheet of the police. This document, which records statements of the accused, and takes into account forensic evidence is apparently false. Instead, we are given a mind-bending explanation of what really happened. In this parallel universe, Rohingya Muslim refugees are the actual perpetrators. They not only violated a fellow Muslim but also threw her body into a pious temple to sully the good Hindu community.

Through yatras, press conferences, protests, social media blitzes and even radio silence, the perpetrators and supporters of the atrocity of Kathua have loudly asserted their rights. Their entitled assertions accompany social and political exclusion for their targeted ‘others’. For the Kathua Bakarwals, as also for Rohingyas in a refugee camp that was recently burnt down as ‘revenge’ in Delhi, the assertions of the entitled signal exclusion from dignity and life itself.

In this, self-aggrandised political subjects collude with the state to arrogate superior citizenship to themselves. Left by the wayside are alternate ideas of citizenship. Setting aside the entitlements of maleness and property, different notions of belonging may anchor on an Arendtian right to have rights. Citizens exist as humans, recognised by the state and communities, irrespective of wealth, social status, or the ability to capture resources. In Kathua, and the India it shines a light on, the right to a dignified life for every human is a pipe dream. Here might – in terms of gender, caste, religious majoritarian status, access to the state and resource ownership – is the only right. The rest is irrelevant, and dispensable – like the Bakarwal child.

An alternate pitch, but can it be more inclusive?

As the battle for what is India – who can lay claim to its land and resources, who gets to define it culturally – gets into gear, perhaps we are seeing the beginning of opposition, and of alternate ideas. The public backlash against events in Kathua, with widespread media attention, and protests across the country is possibly a questioning of the majoritarian, violent, othering and hyper-masculine Idea of India. Presumably, protestors on the street across religion, generation, region and gender, support other visions? What these are is yet to be clear. Perhaps the job before citizens, and the political opposition, is to clearly etch an alternative? Without this clear alternative, protests for justice for the Bakarwal family will be a flash in the pan.

On the subject of visions and ideas of India, any side in this debate would need to ask why we barely register the constant violation of those who are India’s perpetual ‘others’: its Dalits and Adivasis. Violence against women and children, perpetrated by state and non-state actors, is routine in zones of conflict such as Bastar. Here too, the fight is over the land and other natural resources, and claims to ownership, citizenship, culture and belonging around these. If any Idea of India has to set itself against one that is culturally homogenising, hyper-masculine, majoritarian and violent, the inclusion of all ‘others’ is imperative.