Communalising the Hyderabad Rape-Murder Does Nothing to Ensure Women's Safety

Police claimed to have arrested the accused within 24 hours of the crime, yet what the communal rhetoric has failed to see are the many safety loopholes in one of India's most vibrant cities.

Delhi Commission for Women Chairperson Swati Maliwal takes part in a protest over the gangrape and murder of woman veterinarian in Hyderabad , in New Delhi, Saturday, Nov. 30, 2019. Photo: PTI

Hyderabad: The gang rape and murder of an aspiring 27-year old veterinary doctor brought under sharp focus the safety of women in Hyderabad, capital of the country’s youngest state.

The charred body of the victim, a resident of Shadnagar on the suburbs of the state capital, was found in an underpass adjacent to the Bangalore-Hyderabad national highway-44 and Rajiv Gandhi International Airport in the wee hours of Thursday, leaving many questions about whether the ‘Pearl City’, as Hyderabad is known since the Nizam’s rule, is safe for women any more after its bifurcation from Andhra Pradesh in 2014.

A section of the Twitterati, with pro-Hindutva leanings, was quick to colour the crime with a communal hue, citing the involvement of a Muslim youth. The fact that three of the four accused were of a different faith obviously debunked that communal crusade.

Shame on the low lifes who wanted to use the #Priyankareddy rape-murder as fodder for a communal campaign. All the more shameful that they hold power & Govt and actually can improve women’s safety & justice for women if they wished. But no, they won’t. https://t.co/iw1ODbuWH3

A host at a late night TV debate also accused Hyderabad MP Asaduddin Owaisi of the All India Majlis-e-Ittehadul Muslimeen of failing to raise the issue of the woman’s rape and murder in parliament for the sake of his alliance with K. Chandrasekhar Rao’s Telangana Rashtra Samiti.

Mohammod Ariff  (26), the prime accused, used to deliver goods from Hyderabad to Karnataka in his truck. On Wednesday, he had parked the truck near the Tondupally toll gate along with Shiva and the other two accused. Around 6 pm, while they were consuming liquor, they saw the victim parking her scooter near the toll plaza and decided to trap her. After finishing work at her hospital at Kollam she had gone to Tondupally from where she booked a cab to visit a skin specialist at Gachibowli.

“Naveen suggested the idea of a flat tyre and without anyone noticing him, let the air out. When she returned from Gachibowli at 9.18 pm, Arif told her about the flat tyre and offered help, to which she innocently agreed. He sent Shiva to fill air in the tyre,” the commissioner said and added that it was at this time that the victim called her sister and told her about the situation. Shiva returned 10 minutes later, saying the puncture shops were closed, and went away again.

The victim was suspected to have been gang-raped after her kidnapping and was murdered. Her body was later burnt between 2-3 am on Thursday in an apparent bid to destroy evidence. The body was identified by her parents based on the locket of Ganesha and the half-burnt scarf she had worn.

The rape and subsequent murder of the woman triggered widespread public outrage with demands from netizens seeking “instant justice”. Students took out protest rallies with candles across the two Telugu states.

With the manner in which she was brutally raped and murdered, the victim has come to be known as ‘Nirbhaya 2’ at a time when Hyderabad is increasingly being cited as the country’s second capital.

The 23-year-old physiotherapy student who was raped and tortured in a moving bus in South Delhi in 2012 has been remembered as ‘Nirbhaya – which means fearless. 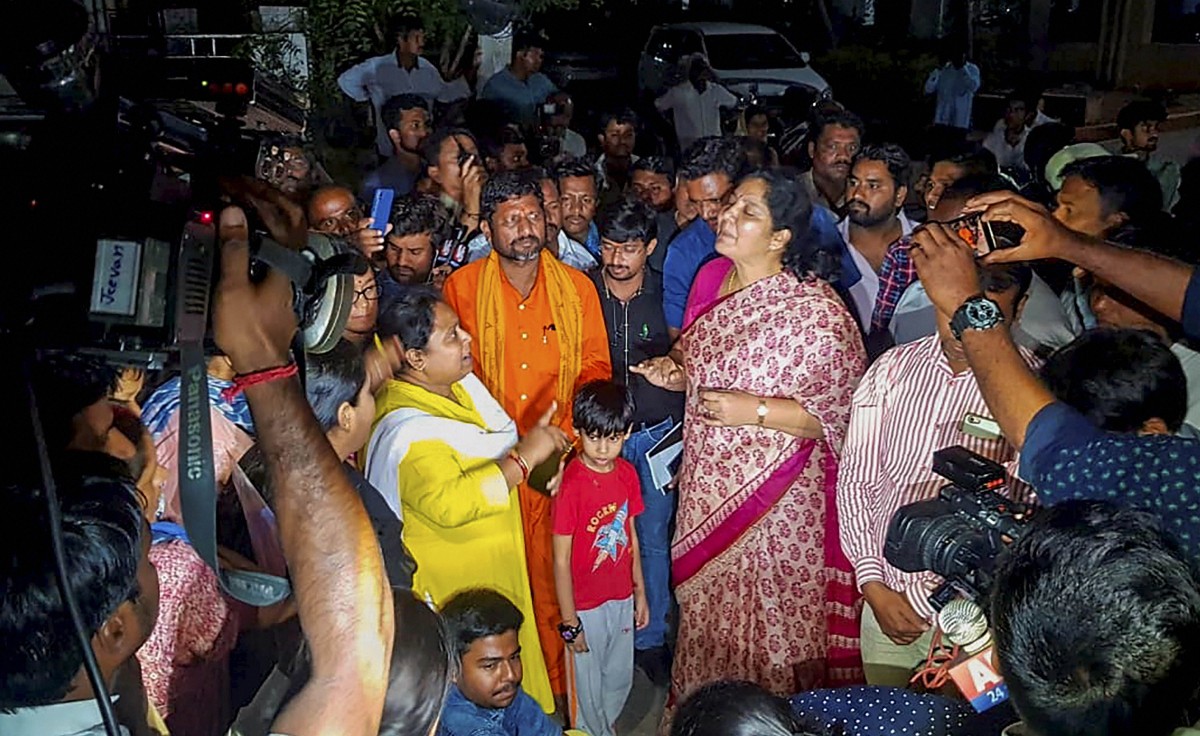 People stage a protest in front of the visiting Telangana Women and Child Welfare Minister Satyavati Rothod at the residence of the veterinary doctor who was brutally murdered yesterday, in Hyderabad, November 29, 2019. Photo: PTI

The Hyderabad police have claimed to have solved the rape case in a span of 24 hours by nabbing a gang of four suspects but their response mechanisms and their inability to prevent crimes have come under the scanner. Police commissioner Sajjanar told media personnel that four suspects were nabbed by tracking the calls made by the victim and the accused from their mobiles through the nearest cell tower.

In comparison with the example of the use of such technology is the victim’s father’s allegation that when he contacted the local police at the airport for help to trace his daughter at around 10:30 pm on Wednesday night, police had said that she must have gone out with her boyfriend.

The father also said that the police could have utilised the four hours between her last call to her sister Bhavya at 9:44 pm and her death at around 2:30 am on Thursday to save her.

Citing commissioner Sajjanar’s firm action in the past as the superintendent of Warangal in 2008, where three youths were allegedly shot dead in a police encounter for throwing acid on a couple of girls in Telangana’s Warangal city, social media users demanded a similar form of instant justice in the rape case of the 27-year old veterinarian.

A delegation headed by the state BJP president K. Laxman met with Telangana governor Tamilisai Soundararajan and briefed her on the increasing incidence of crimes against women. Incidentally, a degree student from Warangal was allegedly raped and murdered a day before the rape case in Hyderabad. Her body was found in the bushes on the outskirts of the city and the police suspected the hand of her boyfriend.

Another female body was found burning on Saturday at Saidulgutta in the same locality where the Hyderabad veterinarian was killed barely a few hours after the Cyberabad police arrested the suspects in that case. KCR, as Telangana’s chief minister is known as, was targeted by the opposition and the women’s rights groups for a spurt in crimes against women during his first stint. He was accused of failing to be sensitive to issues of women’s safety by not having women in his cabinet. In his latest term he inducted two women in his cabinet.

Delhi: Anu Dubey, a young woman, who was protesting near Parliament over atrocities against women was detained by Police earlier today. A team from Delhi Commission for Women has reached the police station. Police has now released her from detention. pic.twitter.com/zqk3SED4mY

The claims by the top brass over their “pro-active” policing with a slew of initiatives such as community policing, bringing the vast area under the commissionerate CCTV surveillance, introducing apps for monitoring and geo-tagging of patrolling teams such as
TSCOP and Hawk Eye have come under scrutiny in the light of the rape case. It is alleged that the policing was limited to the areas inhabited by VIPs and that the crime-prone outskirts and outer ring road were left out.

The city with an area of 650 square kilometres inhabited by 97.41 lakh people has seen exponential growth in the recent past. The capital has 1:653 police-people ratio over 1:474 in the national capital. A senior police officer in the city, on condition of anonymity, said that there is still a greater need for improving policing with an increase in police to people interface.