There is an inexplicable 25% difference, even though both men and women actors are represented by agents who can negotiate on their behalf.

The gender pay gap affects most industries, with women generally earning less than their male counterparts – and Hollywood is no different. Women stars earn around $1.1 million less than male actors with similar experience, based on new research findings. The gap appears to shrink a bit among higher earners but even among actors that have ten years or more of experience the difference remains statistically significant.

To examine the gender earnings gap among Hollywood stars, my colleagues John S. Heywood, Maria Navarro Paniagua and I used an array of different sources, including IMDb, Box Office Mojo to examine 1,344 films with 267 different stars. Women accounted for 38% of the actors under scrutiny.

When we simply compared what the actors were paid for these films, we found that female stars earned on average US$2.2m less per film – that’s 56% less than men. But a lot of this difference can be explained by the myriad factors that determine an actor’s pay. This includes the financial success of the previous films that actors had been in, the genre of the film and the actor’s popularity (based on things like social media followers). We also controlled for differences in time spent shooting (in other words working), for the profitability of the current film, for its production budget, as well as other movie and actor characteristics.

Also watch: How Bad Is the Gender Pay Gap in the Indian Labour Market?

Even when we cross-referenced the data with these various earnings determinants, we found that this explained only half of the pay gap. There was still an unexplained gender gap of more than US$1m dollars per movie, which is a 25% pay gap. This is when we control for everything that could affect the gap.

This gender wage gap of 25% is actually in the ball park of a number of estimates for other industries. For example, research has found an unexplained gender wage differential of 20% among software workers. Other research finds that women doctors earn around 20% less than their otherwise similar male counterparts. When it comes to top business executives, however, women earn 45% less than men.

Reasons for the gap

By looking at some of our control factors, we can see some of the reasons why female Hollywood stars earn less than their male counterparts. One of the main explained gaps we found was to do with what types of film that male and female actors tend to be involved with.

Action films are one of the most popular genres at box offices right now, thanks to strong demand from teenagers, who comprise about 80% of all moviegoers. This is reflected in the pay for top action film roles – men are disproportionately likely to be in action films so they enjoy higher pay as a result. Actions films also spawn a disproportionate number of sequels than other genres, which adds to the overall gap. 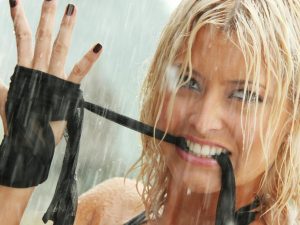 Female actors in action movies are paid considerably lesser than their male counterparts irrespective of their screen time. Photo: Screen grab from the 2007 Hollywood action-flick ‘DOA: Dead or Alive’

When it comes to age, however, the wage gap spikes for actors over 50. It’s around US$1m between male and female actors from under the age of 18 up to 50 but for the over 50s the gap increases to an average of just under US$4m. This could be explained by the fact that people prize the beauty and appearance of female actors more than they do for men and this becomes more of an issue for women over 50.

Contracts in Hollywood are negotiated actor by actor and movie by movie, allowing stars to be paid according to their current individual performance, productivity and contribution to a specific film. This means that they should be paid based on their value and experience alone. In an equal world, you’d expect there to be no gender pay gap and certainly not such a significant one.

Plus, stars of both genders frequently perform in the same movies where they essentially do the same work, at the same time and in the same location. Not only does this offer an interesting testing ground for gender pay equality, it highlights the injustice of the pay gap.

Some point to the pay negotiations process to explain the difference between male and female pay. The idea is that women do not push as hard for higher salaries or profit shares. But Hollywood stars retain professional agents that negotiate on their behalf and receive a share of the earnings that are agreed upon. Stars of both genders are also often represented by the same agent or agency.

These results carry potential implications for policies that aim to narrow the gender earnings gap in Hollywood. Transparency could be one solution – if contracts were made public this could reduce the gap. Even just knowing that there is this inexplicable 25% difference should hopefully encourage women actors to push for more.