Land and labour are two basic factors needed by rural people for income generation. While women have always played a key role in agricultural production, their importance both as workers and as farm managers has been growing in the last two decades as more men move to non-farm jobs – leading to an increased feminisation of agriculture.

However, ownership of land is concentrated mostly in male hands in our patriarchal society. Bina Agarwal has estimated that in India, not more than 2 to 5% cultivated land is in favour of women. Lack of entitlement to land (and other assets such as house, livestock, and tractors) is a severe impediment to efficiency in agriculture – in the absence of a title, women cannot get credit or be entitled to irrigation and other inputs, especially technology.

In addition to improved production, the clinching argument in favour of land titles to women is the stability and security it provides, the protection it affords from marital violence, and the bargaining power it gives women in household decision making and in the labour market for wages. Increases in female status helps reduce fertility and rates of child mortality.

However, without title to land, women are not recognised – even by the state – as clients for extension services or as candidates for membership in institutions such as co-operative societies.

Before 1956, devolution of both acquired and inherited property was governed by the personal laws of the community. Although equal rights were granted to women in acquired property (mostly urban) through the Hindu Succession Act, 1956, rights in inherited agricultural land were specifically exempted from the Act, and were made subject to tenancy and land reform laws of the states.

In India, agrarian reforms through the 1950s and later took place at a time when gender equality was marginal to the policy agenda and women’s organisations lacked their current visibility. Hence, in most government land reform programmes and land transfers, women’s land rights remained a non-issue.

As member of the National Advisory Council, I convinced Sonia Gandhi on the need to empower women through ownership of land. She sent my note to the law ministry, which amended the Hindu Succession Act in 2005, and did away with the discriminatory clauses by bringing agricultural land at par with acquired property and made Hindu (which includes Sikhs, Buddhists, and Jains) women’s inheritance rights in land legally equal to men’s across states, overriding any inconsistent state laws.

This can benefit millions of women dependent on agriculture for survival. However, neither the department of land resources nor the ministry of women and child development (MWCD) has issued a single circular asking states to implement the law.

States too have by and large ignored its implementation. For instance, Uttar Pradesh added unmarried daughters in the category of those who inherit agricultural land in 2008, but married daughters are still not included, which violates central legislation. Let us hope someone would go to the court and get this illegality removed. Section 46(1) of the Rajasthan Tenancy Act equates women with lunatics and idiots. 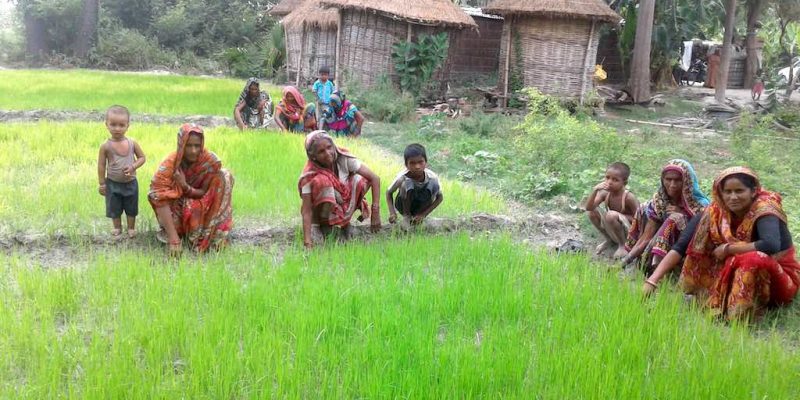 Even though the legal framework has been amended in favour of women, women often forego their claims in anticipation of support from their natal family in case of marital problems or their marriages breaking up – even though such support may not actually materialise.

Women also face impediments in operationalising the statutory codes and getting their names included in the records. Also, ownership does not always translate into control, as is the experience of matrilineal societies of Meghalaya where control is exercised by the maternal uncle. Decision making in cropping patterns, sale, mortgage and the purchase of land or the instruments of production remains in the hands of the men of the household.

Thus the issue is not only legal, it is also cultural. As women’s control over loans, income and assets goes down, their access to social resources such as knowledge, power and prestige diminishes. Disparity in gender status gets intensified with the emergence and deepening of other forms of stratification. Subordination and seclusion of women is more noticed in communities where social differentiation and hierarchy based on ownership patterns or on prestige is more pronounced.

The finance minister should have announced a new Central Scheme in the department of land resources to launch a campaign to correct revenue records and ensure that women’s land ownership rights are properly recorded by the states with intimation to women. The Scheme should have provided free legal aid to women seeking assertion of their rights. Tahsil and panchayat staff should be sensitised through training modules, so that they come out of their patriarchal mindset.

A national survey of 5,000 markets in India showed that none of the markets had a rest house for women producers, and neither did they have basic facilities like toilet blocks. This must change so as to attract women farmers to come to the market. Monitorable targets should be set for the district collectors to ensure timely implementation of law. The finance minister could have set a target of at least 30% cultivated land in women’s name by 2024.

It may be prudent to make these rights inalienable and non-transferable for the first 20 years on the pattern of pattas under the Forest Rights Act. Further, MWCD should prepare and circulate pamphlets to members of parliament that enable them raising concerns about women’s rights to land and property in parliament.

So, only about a quarter of the females in the age group 15-60 were either working or seeking jobs.

Regardless of the opportunities in MGNREGA, women’s exclusion from rural labour markets remains a potential concern. Rural women used to transplant and harvest paddy, which is now being done by machines, throwing millions of women out of work. The new non-farm jobs such as in construction, retail trade, and hospitality sector are largely male oriented. These are generated some distance away from the village where men can go on a cycle – but most rural women do not know how to ride one.

The decline in the number of female workers is a matter of concern as it increases their dependency on men and thus strengthens patriarchal norms.

It has to be understood that asset redistribution is superior to income redistribution. It provides a basis for overcoming distortions in the functioning of markets and for restructuring gender relations in the field of property rights, access to technology, healthcare, and governance. Asset ownership and control rights are preferable to numerous policy alternatives for women’s empowerment.

These are likely to bring in changes in public opinion about gender roles and deep-seated inequalities in prevailing socio-cultural norms and inequalities practised against them.

In the absence of both jobs and assets, women are getting economically disempowered and their dependence on men has increased. Government schemes unfortunately ignore intra-household inequities. One expected finance minister to show greater concern over these fundamental issues.

Naresh Chandra Saxena is a former member of the Planning Commission.