Encounter Killings Will Not Make Women Safer From Sexual Violence

The long fight against sexual assault in our country has highlighted the deep sexism and caste, religious and class prejudice that pervades investigating agencies.

On December 6, 2019, the Telangana police declared that “the law has done its duty”, referring to the alleged ‘encounter’ of four persons suspected of raping and murdering a 26-year-old veterinarian in Hyderabad. Police officials of several other states have lauded and endorsed the Telangana police’s actions.

The Telangana police’s account provides no explanation for why the suspects were taken out without handcuffs at 3 am, or how four unarmed men managed to overpower ten armed policepersons This is prima facie a case of custodial murder.

Widespread condonation of the use of violence in the name of women’s safety is a distraction from finding real and just solutions to ending violence against women. Most recently, the reports of a rape victim being set ablaze by her perpetrators in broad daylight in Unnao show us that the police have failed to protect victims while they are still alive. The rape victim succumbed to her injuries on Friday night.

Police “encounters” shift the focus away from the systemic failure of institutions in discharging their duties effectively in the first place. In the present case, there is no way to even know whether the suspects were indeed the perpetrators of the crime, or scapegoats used by the police to assuage public anger. The constitutional duty of the police is to prevent crimes and investigate them, and it is these roles that it must perform in accordance with the law and the constitution.

What is the legality of encounters?

The description of the custodial killings as “encounters” is a thinly-veiled attempt by the Telangana police to claim legitimacy for their brazenly illegal acts. Under law, such deaths amount to the commission of the offence of murder, unless they fall in the exception of self-defence. There is no exception exclusively available to police.

The justification of encounters as a legitimate response to the maintenance of law and order is antithetical to the rule of law. In fact, the Supreme Court has considered such abuse of power by the police to be “state-sponsored terrorism” and has issued detailed guidelines on the investigation of such police encounters.

Killings in police custody have been particularly decried for their impact on the legitimacy of the legal system itself. For instance, in D.K. Basu vs State of West Bengal, the Supreme Court observed that:

“If the functionaries of the government become law breakers, it is bound to breed contempt for law and would encourage lawlessness and every man would have the tendency to become law unto himself, thereby leading to anarchism. No civilised nation can permit that to happen.”

These custodial murders are not the only instance of abuse of power by the Telangana police. Reports suggest that this appears to be a rehearsed pattern. In 2008, three men, accused of throwing acid on two 20-year-old women in Warangal, Andhra Pradesh, were killed in an “encounter” with a team led by the same police officer as in the present case. The parallels to this case are chilling – the victim had accused the police of not acting on a complaint filed by her almost three weeks before the acid attack. The police, who received a lot of criticism for not taking any action, were suddenly lauded as heroes after the “encounter”.

The long fight against sexual assault in our country has highlighted the deep sexism and caste, religious and class prejudice that pervades investigating agencies. Allowing unrestrained power in the hands of the same police will not make the system easier for victims of sexual assault.

In the Unnao case, despite the legal mandate to expeditiously register FIRs in allegations of rape, an FIR was registered only after the victim approached courts to intervene. In the Hyderabad case, the family of the victim ran from pillar to post to get the missing person’s complaint registered, to be met with inaction and statements of victim blaming by the police. In the Kuldeep Sengar-Unnao rape case, the police have been instrumental in silencing the victim and shielding the BJP MLA who is accused of serious acts of gang rape. It is sobering to remember that the victim’s own father was beaten to death in police custody. Similarly, the rape victim in the Chinmayanand case was arrested on charges of extortion after her allegations against the powerful BJP leader became public. 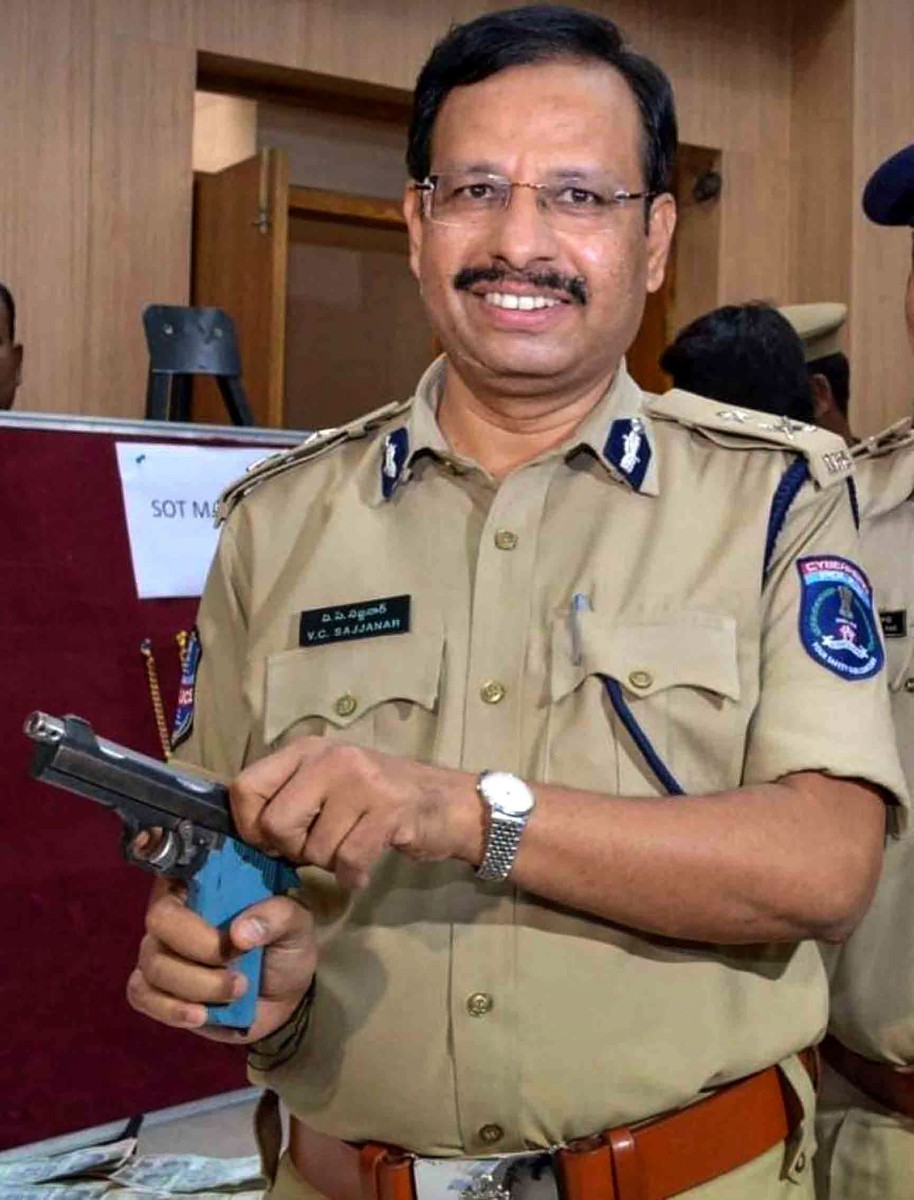 Cyberabad police commissioner V.C. Sajjanar, who was leading the ‘encounter’ team, posing with a gun in an undated photo. Photo: PTI

In our attempt to ratify the so-called encounter in Telangana, we have forgotten the lapses of the police across the country in performing their primary duties. The police has exceeded the powers granted to it, abdicated the functions it ought to have performed and have now closed the case with a dangerous precedent – all the while claiming the moral upper-hand for themselves and their political masters.

The mass rapes by Indian security forces in Kunan Poshpura (2004), and, the brutal rape and murder of Manorama by security forces in Manipur brings forth the strong nexus between untrammelled policing power and sexual assault. These cases also forcefully demonstrate that it is marginalised communities, especially women from these communities – Dalits, tribals, Muslims – that have historically suffered the brunt of police violence.

Despite the brazen illegality of the killings, politicians and public personalities have rushed to applaud the Telangana Police for “doing justice”. While these figures reap the benefits of their spectacle, the biggest victim of encounters is the justice system, and every victim who needs to put their faith in it.

The glorification of “righteous violence” in the public psyche, through encounters, lynching or the death penalty, does not offer solutions to sexual violence. Rape is a tool of patriarchal control and vigilante-styled violence only strengthens patriarchy’s culture of toxic masculinity. Justice for victims of sexual violence requires something much more difficult – it needs comprehensive and structural change of mindsets and institutions.

If we can learn anything from the tragic death of the victim in the Unnao case, it is urgency of comprehensive witness and victim protection programmes. We need legislative reform to ensure that adult rape victims have the right to be heard before deciding to grant bail to persons accused of sexual offences. We need more trained DNA experts and DNA testing centres. The state must listen to feminist law reform experts and introduce timely change in the justice delivery system in order to strengthen it, and not to subvert it by abandoning the judicial process.

The delegitimisation of the criminal justice system harms victims of crimes, and disincentivises various actors in the system – police, lawyers, prosecutors or judges – from performing their role as per the law and the constitution. By allowing the police to replace a proper investigation with murdering the suspects, we permit even further fracturing and distortion of the criminal justice system.

Proper process under law must be followed

The National Human Rights Commission has decided to conduct an enquiry into the encounter. The Telangana high court has also taken judicial notice of the alleged encounter and has asked for the video of the post-mortem of the bodies of the four suspects be handed over to the court. The high court has also directed that the bodies be preserved till 8 pm on December 9. A PIL has also been filed before the Supreme Court to take up the encounter killings.

Watch: Why ‘Encounter’ Killing by Hyderabad Police is Nothing to Celebrate

While these various bodies and courts consider this case, the guidelines of the Supreme Court in PUCL vs State of Maharashtra on the investigation of extra-judicial killings ought to be followed in a fair manner in the Hyderabad ‘encounter’. It is imperative that an FIR be registered against the police officers involved in the ‘encounter’, followed by an independent investigation by the state CID or a team from another police station led by a sufficiently senior officer.

A prompt inquiry by a magistrate must be conducted and all evidence must be preserved. If it is found that the death of the suspects was caused by shooting without legal justification, the concerned police officers must be suspended and disciplinary and criminal action taken against them and those that directed this action.

A state that panders to public sentiment and delivers different forms of justice for different kinds of cases takes away from the rule of law and the idea of an impartial state. Case upon forgotten case of the rape of Dalit and tribal women, and the shockingly high number of politicians with rape charges against them, show us that when men accused of rape are powerful, and/or victims are from marginalised communities, the victims will be disbelieved, persecuted and silenced.

Calls for violence seemed to be reserved for suspects who are not upper-caste, upper-class men from privileged communities. In this context we must ask: Is a world where the police and their political masters have free reign to kill without any investigation or judicial process really the utopia where all women find freedom?

The Women in Criminal Law Association (WCLA) is a collaborative group for women in criminal litigation that aims to share knowledge, build skills, and create inclusive professional networks.