How Egyptian Women Have Broken the Stigma Around Sexual Violence

An explosion of social resistance is shedding new light on Egypt’s epidemic of sexual violence. 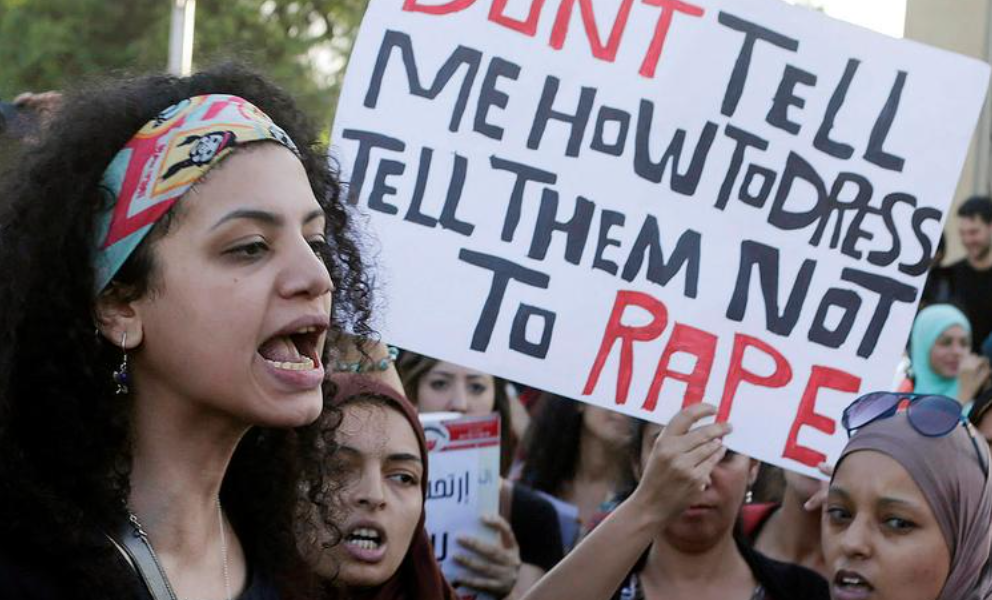 FILE PHOTO: Women chant slogans as they gather to protest against sexual harassment in front of the opera house in Cairo June 14, 2014, after a woman was sexually assaulted by a mob during the June 8 celebrations marking the new president Abdel Fattah al-Sisi's inauguration in Tahrir square. Reuters/Asmaa Waguih

In late December 2019, the story of a niqab-wearing Egyptian girl from the city of Farshout made headlines in the Egyptian media. She spoke out about her gang-rape by a group of influential men in the small Qena city in the heart of Upper Egypt. The girl relayed terrifying details of her kidnapping and gang-rape in a remote field.

“Farshout girl”, as she is known in the media, spoke from behind a veil — only her eyes were visible — about her panic while listening to her rapists discussing what they were going to do with her. She spoke about seeing a literal shroud that someone brought for the purpose of burying her after killing her. She spoke about how she succeeded in escaping from her rapists, and how she went, almost naked and bleeding, to a police station to file a report against her rapists — despite their brutal reputation — and how she waged a bitter struggle within her Upper Egyptian community to obtain “some justice” for what happened to her.

She spoke about her father’s explicit rejection of what she did to her rapists, and how she “disowned” her father because of his unsupportive attitude in an unusual reversal of the traditional family relationship rules in Egypt, where children are usually disowned by their parents and not vice versa.

The scene of the Farshout girl cannot be fully understood — as a scene that shatters a large number of stereotypical perceptions about Egyptian women in general, especially sa`idiyat (women from Upper Egypt) and veiled women — without placing it in the context of the decades-long struggle of Egyptian women against sexual violence in Egypt.

When Noha al-Ostaz won the first court ruling as a plaintiff in a case of sexual harassment in 2008, it coincided with the beginning of the emergence of a new generation of feminist institutions and initiatives — such as Nazra for Feminist Studies (2007) and HarassMap (2010) — that placed the issue of sexual violence at the top of its agenda.

Since then, the discussion of violence against women is no longer the preserve of specific cultural groups, political circles, and feminist and human rights organisations. Rather, it has moved to the margins of the mainstream.

The period since 2011 has witnessed a real escalation of a fluid movement around the issue of sexual violence in Egypt, which took different forms with multiple actors. There are groups that resisted the spread of sexual violence during the events of the January 25, 2011 revolution and its aftermath, such as the “OpAntiSH” (Operation Anti-Sexual Harassment) group.

The last two initiatives in particular shatter all prevailing perceptions of the feminist movement in Egypt as limited to civil society organizations or feminist groups that belong to the broader cultural, political and human rights circles. They shatter perceptions of resistance to the epidemic of sexual violence in Egypt, whether in the form of organizing, writing, resorting to the law or the newer mechanisms of gathering and publishing testimonies about sexual violence, as the preserve of a certain type of women and not others.

Also read: How Should We Read NCRB Data on Violence Against Women Across States?

The Farshout incident is only one of dozens of recent incidents that have placed the issue of sexual violence at the heart of the feminist movement in Egypt thanks to the work of groups of girls who openly raise the issue — not as victims asking for support from the state and from society, but as actors who are more closely engaged with the political, social and legal context. The latter is historically complicit in relation to issues of violence against women in Egypt.

What we are witnessing now is the continuous and uninterrupted explosion of sexual violence cases, whether in upper-class circles such as in the Fairmont case, or in the Coptic Orthodox Church, where a number of priests face charges of sexual abuse revealed by Coptic girls, or within the artistic and cultural and human rights community — nothing but vivid displays of the ferociousness of the issue of sexual violence in all sectors of Egyptian society. The feminist struggles that are taking shape raise critical questions about sexual violence, societal complicity and state responsibility in a three-layered fashion.

The first layer is on the level of the state and its legal instruments. At the state level, decisive measures still come slowly and in response to the women’s mobilisation and their pressure, as we have seen recently from the passing of a legal amendment to protect the privacy of whistleblowers in crimes of sexual violence, or the public prosecution’s direct intervention in arresting alleged perpetrators in a number of recent sexual violence cases.

Therefore, the current feminist movement still needs to activate procedures and laws that make litigation in cases of sexual violence an easier path for women. Egypt still needs a comprehensive law to combat sexual violence in the private and public spheres, along the lines of similar legal reforms that were adopted in other countries in the region, such as Tunisia.

The second level concerns institutional policies against sexual harassment in all fields that need to be put in place, an effort that female journalists, academics and filmmakers are currently undertaking by putting pressure on various institutions such as universities, companies, and press and media organisations to have clear policies and mechanisms to combat sexual violence in the workplace.

The third level is the publishing of anonymous testimonials in cyberspace, where the disclosure breaks the silence and confronts everyone with painful and shocking accounts. The testimonies of women, loaded with all the contradictions of state and society, bear witness to the systemic failure in dealing with crimes of sexual violence. This is a pivotal moment of pain, of positive confusion, that Egyptian society desperately needs.

Hind Ahmed Zaki is an assistant professor in political science and Middle East studies at the University of Connecticut. Her doctoral thesis (and current book project) entitled In the Shadow of the State: Gender Contestation and Legal Mobilization in the Context of the Arab Spring in Egypt and Tunisia won numerous prizes, including the best dissertation prize in the field of gender and politics and the best fieldwork award for dissertation research excellence from the American Political Science Association in 2019. In addition to her academic work, she is also an activist within women’s rights circles in Egypt and the region.

This article was originally published on MadaMasr and is republished via Progressive International.