When It Comes To Dismissing Marital Violence, Aren't We All Josephines?

The insensitive remarks made by the former Kerala Women’s Commission chief should help us understand why a majority of women who face domestic violence do not approach the police, or their own families and friends. 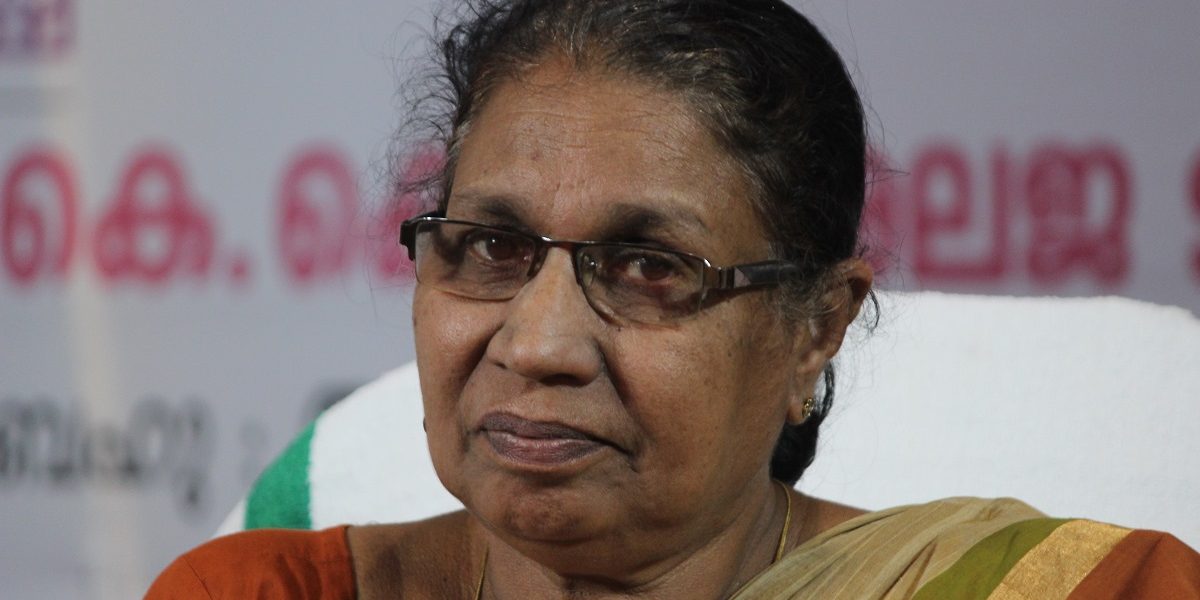 Recently, there was a small political storm in Kerala over the controversial remarks of M.C. Josephine, the chairperson of the Kerala Women’s Commission, who later resigned. In a live interaction on a television phone-in show, a caller mentioned being subjected to domestic violence and not having told anybody, including the police. To this, Josephine responded: “Enna pinne anubhavicho!” (Oh, then you suffer!).

News of this incident spread quickly across traditional and social media in Kerala and outside it. Josephine has made controversial and callous remarks in the past as well. Opposition political parties – particularly the Congress and the BJP – and many outside of party politics have condemned the remarks. Faced with this backlash, at a time when the state government led by the CPI(M) is set to embark on an ambitious gender outreach programme, she resigned under pressure.

Unfortunately and alas inevitably, the incident was soon constructed in party political terms and in terms of political correctness. There is little discussion of the extent and nature of domestic violence and the patterns of reporting and silence around it. Meanwhile, other recent prominent cases of gendered violence continue to be reported in Kerala and there have been recent imaginative and subtle attempts to sustain discussions around patriarchy. In the past, political classes and their constituencies have been more comfortable with discourses and interventions around ‘development’ and women’s economic rights more than issues of sexual harassment and violence. We seek to contextualise Josephine’s intemperate remarks as considerable evidence already exists that even ignorant remarks reflect a dismissive attitude towards marital violence that is common within a patriarchal context.

People at a protest demanding an end to violence against women. Photo: cathredfern/Flickr CC BY NC 2.0

The only credible large scale data source for domestic violence and reporting in India is the National Family Health Survey (NFHS), which surveyed a large representative sample of women of reproductive age (15-49 years) using sophisticated sampling and questions consistent with the Demographic and Health Survey conducted in many parts of the world. The NFHS covers sexual and emotional violence as well, but here we focus on physical violence including pushing, shaking, slapping, punching, kicking, dragging, twisting arm, pulling hair, strangling and burning.

The figure below shows that in Kerala, expectedly, of those who did reach out, most often it was to their natal families (parents or siblings) – and yet only a sixth of them did so. Less than a tenth shared with their husband’s family and only 2% shared with neighbours and friends. Of relevance for Josephine’s controversial remarks, only 3% of women reporting domestic violence on the survey had approached the police. Other institutional possibilities – social organisations, lawyers, religious leaders – are used even less. The real question is why three-quarters of women who faced domestic physical violence in Kerala did not report this to anyone – and why only 16% reported it to even their own natal families and only 3% reported it to the police. 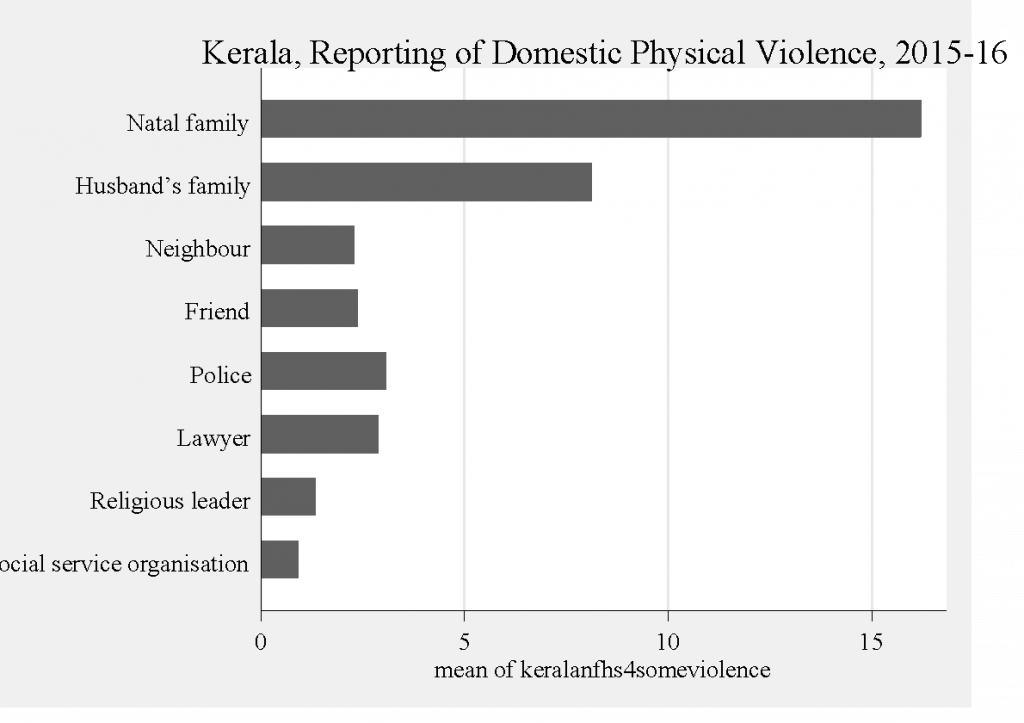 While the very low level of reporting domestic violence – not only to the police but even within networks of family and friends – is of immense concern, it is hardly shocking for those working on gender issues. Previous rounds of NFHS presented similar patterns of silence, as have qualitative studies. Framed against this background, Josephine’s remarks are all the more troubling.

In fact, much is known about the silences of those facing violence. Surveys such as the NFHS reveal that in some Indian states, more than half the women justify the use of physical violence. Women are often silenced by social norms that legitimise domestic violence if they fail in their duties as ‘good’ wives and daughters-in-law, making them believe that somehow they are responsible for the violence they face.

Where community members believe that a woman is a ‘worthy victim’ and is blameless, they are more likely to intervene. Women often do not report violence to institutions because of fear of being disbelieved or humiliated – or worse still, blamed for the violence. Police officials often view marital violence as a private matter, preferring that couples ‘compromise’ rather than file a police complaint, even in all-women police stations.

When domestic violence is precipitated by alcohol abuse, victims feel humiliated because of the violence as well as having a spouse who is an alcoholic. Studies indicate that dowry demands and alcoholism are among the major causes of domestic violence in Kerala.

Research also reveals that when domestic violence is accompanied by dowry-related violence, women are less likely to be silenced and more likely to be supported. Thanks to feminist activism over several decades, dowry-related violence is penalised and considered an unacceptable form of violence against wives. Dowry harassment is seen as true oppression, but non-dowry related domestic violence has not invited a similar degree of social censure. In fact, in recent years “men’s rights” groups have successfully fought to dilute the legal protections for those facing domestic violence.

Resounding as the silence around domestic violence is for Kerala, it is still larger for many other parts of the country. The figure below shows that for India as a whole, the percentage of women in domestic violence situations who reach out to family and friends is only between half and two-thirds of the corresponding numbers for Kerala. Reporting to institutional sources, including the police, is far worse still, reaching only between a tenth and a fifth of Kerala’s already low levels. 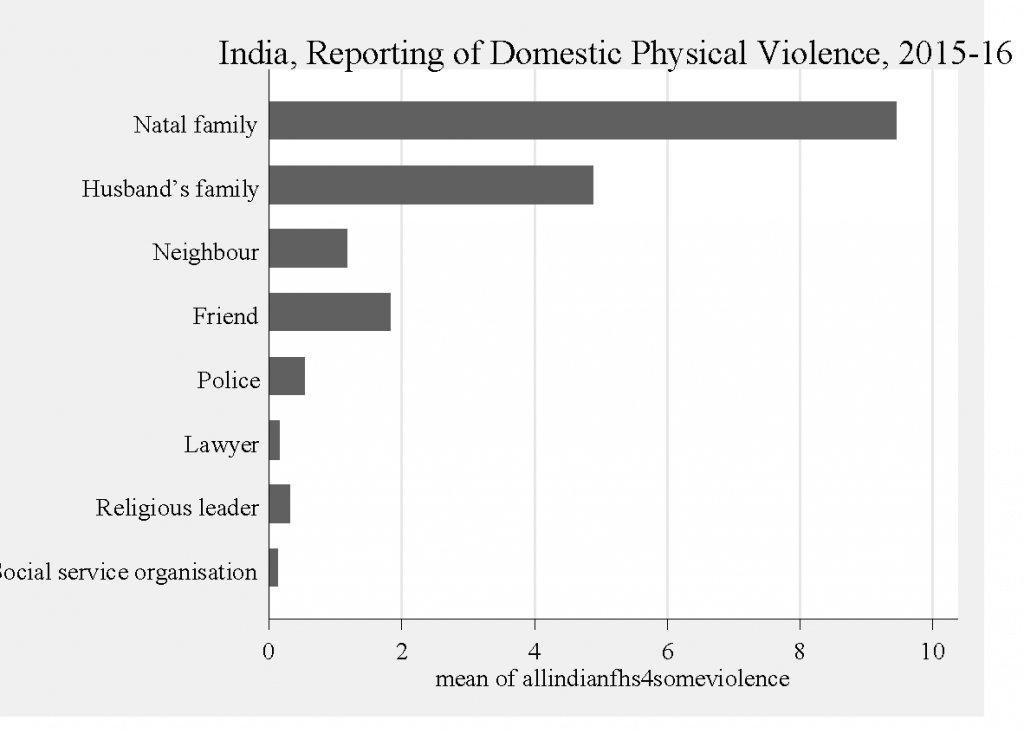 This reality is consistent with research suggesting a ‘pyramid of reporting’ (see figure below): among the few who share their experience of violence, most often it is shared first with the natal family, less often with in-laws, and still less with acquaintances. Reporting to institutions, such as the police or women’s organisations, is far less. An even smaller fraction of this gets to the court, and only a sliver gets convicted although there is a civil law (Protection of Women from Domestic Violence Act, 2005, PWDVA) and a criminal law (Section 498A) under which women can seek redress from courts. 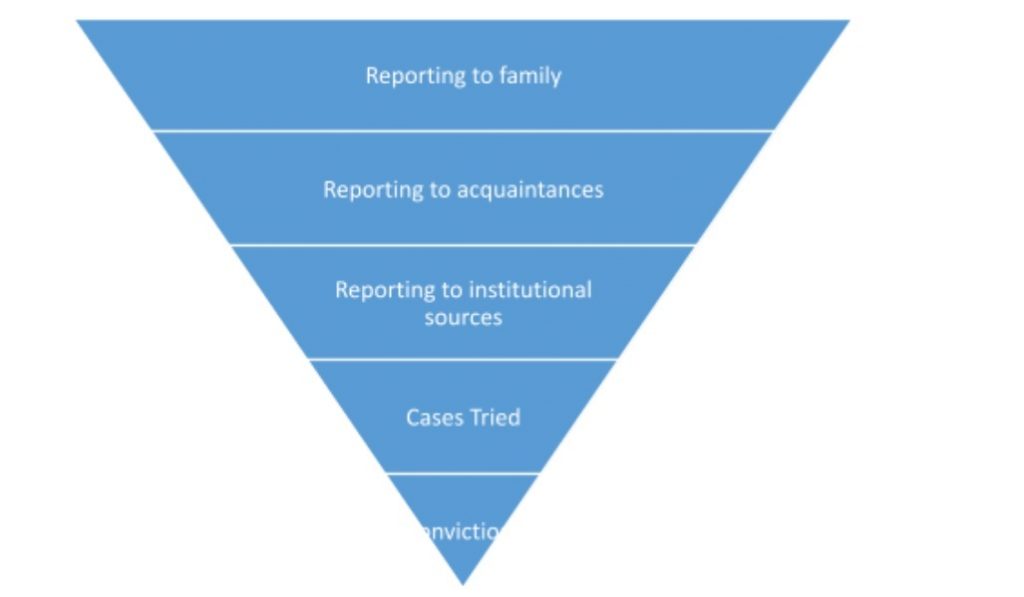 Changes in reporting of violence over time

What has been the trend over time? When we compare data from two successive rounds of NFHS (2005-06 and 2015-16), the incidence of domestic physical violence in Kerala reduced only slightly over that decade, from 15.3% to 13.3%. But despite this, there were large changes in the patterns of reporting violence over the decade. The figure below plots reporting to family and friends (left graph) and institutions (right graph) in 2005-06 versus 2015-16. The 45-degrees line helps to gauge the extent of change over time: dots below the line indicate a higher value in 2015-16 and dots above the line indicate a higher value in 2005-06. The figure shows that incidence of reporting to family halved in Kerala over the decade – from 32% to only 16% for natal family and from 17% to only 8% for husband’s family.

And yet the figure shows the opposite trend for institutional reporting (right graph). Although the incidence of reporting to police is extremely low, it more than doubled in Kerala from 1.3% to 3.1%. Similarly, there is an upward trend for reporting to the other institutional sources as well. The opposing time trends in the two sets of graphs call for greater research and understanding of underlying dynamics. The ‘pyramid of reporting’ is changing considerably in Kerala. 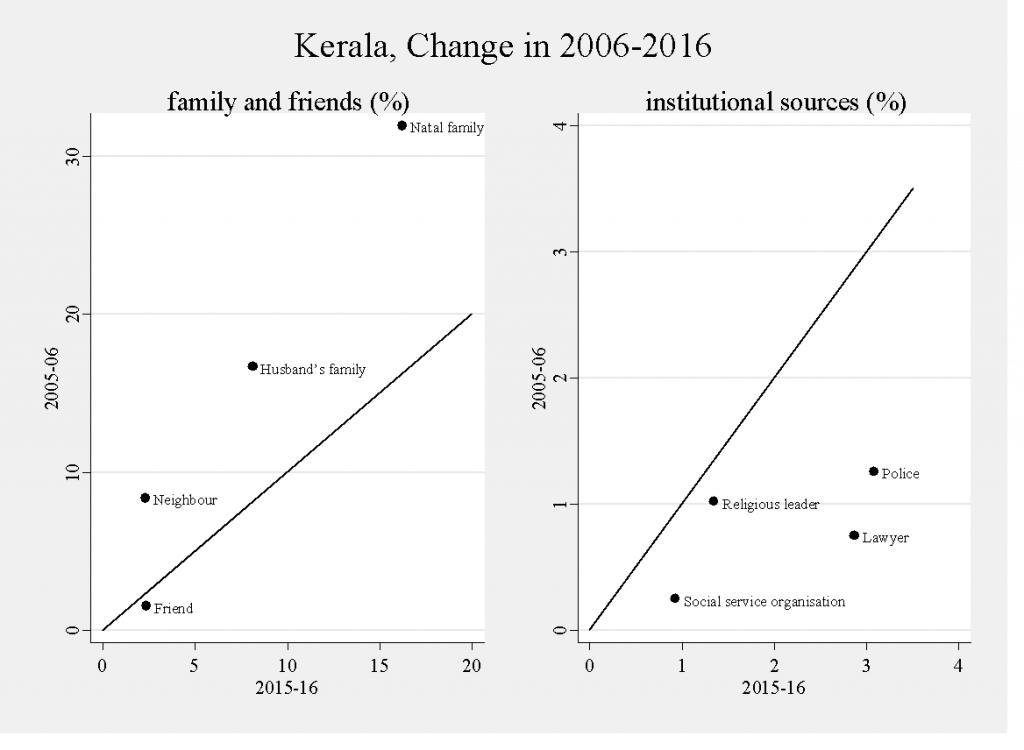 What is disturbing – but not unexpected – is that rather than view Josephine’s remarks as a trigger for deeper understanding of the situation, political expediency and casual outrage have marked the response. Presumably, the storm will unfortunately be relegated to this chaaya-cup and politics and social media will move on to other matters to get outraged about. There is little evidence that political leaders of the Congress or the BJP who successfully called for Josephine’s resignation, are particularly aware of the extent and nature of domestic violence reporting or the deeper causes of silence. In fact, it would not have been surprising if Josephine’s remarks had actually come from any one of a number of political leaders of the CPI(M), Congress or other parties – or for that matter, from senior bureaucrats, religious leaders, and so forth. We find the expressions of outrage to be insincere.

Leadership – whether political, institutional or social – should be backed by a greater understanding of the situation, in this case, the understanding that women overwhelmingly do not approach the police, or for that matter even their own families and friends. Leadership should also be about acknowledging the problem rather than being self-righteous without sufficiently engaging with the problem. In today’s aggressive and uber-masculine models of leadership – whether from the prime minister, chief minister or opposition leaders – there is little appetite for self-reflection. Ironically, those aggressive models belie a lack of self-confidence and a lack of ambition towards truly transformative politics.

If a Gandhi were around today, would he not respond by not only questioning Josephine’s remarks but also, in the same breath, acknowledging that most of us are cut from the same cloth as her? Rather than cast stones at Josephine or the government that appointed her, would we not be better served by Gibran’s well-known words: “And when one of you falls down he falls for those behind him, a caution against the stumbling stone. Aye, and he falls for those ahead of him, who, though faster and surer of foot, yet removed not the stumbling stone.”

Is it too much to dream that this deplorable incident can become an opportunity to acknowledge the depredations of patriarchal power and our own individual and collective complicity in it – and through that process, transcend the everyday jostling for power to attempt a more compassionate politics? If we can’t even hope for such a possibility, what are we really left with?

Suraj Jacob teaches at the Azim Premji University. Sreeparna Chattopadhyay is an independent researcher based in Bangalore.