Nearly 75% of those who reported being victims of domestic violence did not seek help from anyone. 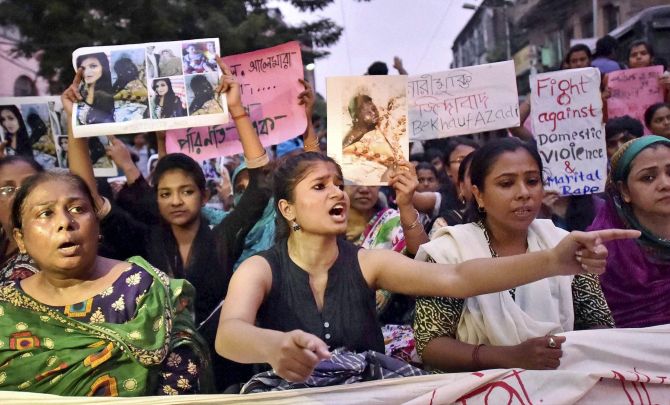 Women block the roads as they sit in protest against domestic violence in Kolkata. Credit: File/PTI/Ashok Bhaumik

Domestic violence has serious economic, social and health consequences – not only for women and children, but also for the wider family. It is an acute problem in India. National Family Health Survey (NFHS) data indicate that over 30% of Indian women have been physically, sexually or emotionally abused by their husbands at some point in their lives.

The recent global and Indian #MeToo movement has revealed that many Indian women have experienced sexual harassment or sexual assault at the workplace and yet kept silent about it for years. We observe similar patterns among women who have been abused by their husbands.

Using NFHS data and ethnographic data from a Mumbai slum, it was found that the majority of Indian women who experience domestic violence do not share it with anybody or seek help. Among those who do, a “pyramid of reporting” of domestic violence exists: Informal sources (natal family followed by friends) are favoured sources of support and very few women report violence via institutional routes (nongovernmental organisations and police).

It is yet another matter that satisfactory resolution is rare even when the matter gets into the institutional and court system.

Why does reporting of violence matter?

Reporting is the first step towards ending the silence around domestic violence. It is also an act of resistance and an exertion of female agency. But this is not without its risks – ranging from a lack of acceptance by families, humiliation by the police, to retaliatory escalation of violence. The extent and type of support that a survivor of violence receives, including practical assistance and dealing with emotions, impacts coping with and recovery from trauma.

India lacks mandatory reporting mechanisms such as routine screening and reporting by hospitals when women visit with suspicious injuries. Further, due to entrenched patriarchal practices within legal institutions, domestic violence is often treated as a private family matter. Progressive laws exist (e.g., Section 498(A) of the Indian Penal Code and Protection of Women from Domestic Violence Act (PWDVA)), but several men’s rights groups and other organisations have called for their repeal.

In July 2017, the Supreme Court passed a verdict that banned immediate arrest unless “visible signs of injuries are present” in case of dowry harassment under Section 498A to prevent women from misusing this law. However, there is little empirical evidence to suggest widespread misuse. And the focus on visible injuries imagines all domestic violence victims to be visibly physically battered. In instances of emotional abuse, there may be no physical injuries and in instances of marital rape or other sexual violence, women may feel uncomfortable revealing them to a police officer.

What is reported and to whom?

Thirty-one percent of respondents in NFHS (Round 3, 2005) – a little over 20,000 women –reported that they experienced domestic violence. Shockingly, almost 75% did not seek help from anyone. The table below presents further details of whom women sought assistance from.

The ethnographic data reveals, that of the women experiencing severe violence – including broken bones, bruises and burns – none went to the police to report violence except in one instance where a woman sought police help not for battery, but the abduction of her toddler son by her husband.

Many felt that the police were unreliable, not working unless bribed and that seeking police intervention would tarnish their reputation in the community.

The extent to which women seek more than one source of help is quite limited. Of all women experiencing domestic violence, 26% seek help from at least one source, and 7% seek help from multiple sources – with the natal family figuring prominently in these instances.

The ethnographic data suggest that the absence of natal family is a barrier to reporting instances of violence to other sources. Pointing to a large dented brass vessel with which her husband repeatedly hit her, one woman said she did not report it the police:

“I do not have any sahara (support) – no mother, no father. How many years will my mausi (maternal aunt) support me? I thought of all this and tolerated it.”

The natal family’s willingness and ability to help varies greatly and is shaped by poverty, patriarchal norms, cultural legitimisation of violence and family structure. Many women did not think their families would be able to bear their “burden,” especially because typically they had children, and that stopped them from sharing their ordeal. This is often a pragmatic assessment, given the precarious economic and social existence of their natal families.

It is not as if women who are being abused are always abandoned by their friends and neighbours. The spatial configurations of an urban informal settlement are such that a woman who is being physically abused publicly will be “rescued” – even if only temporarily – by her neighbours. This is not just because the community feels empathy for women, but also because violence of this nature is seen as a form of public nuisance and many families would prefer a peaceful neighbourhood.

Also read: Why Sexual Assault Is Among the Most Traumatic Experiences Women Can Face

While some women drew on the idea of a “universal sisterhood” by identifying other women as sources of support, this was not the dominant discourse. Community support was predicated on often subjective and ad hoc assessments of whether the victim was “worthy” of support. The worthiness of a victim was contingent on whether she was a good mother, wife and daughter-in-law.

Often loyalties were also split along regional and caste lines as well as whether families were tenants or owners. Expectedly, local women whose families owned their homes had the most supportive systems, while migrant, tenant, women had the least support.

Our study highlights that while the existence of informal reporting of domestic violence is welcome, there are limits to the extent to which informal sources are willing or able to help survivors against the backdrop of their own precarious existence and the existence of patriarchal structures, practices and discourses. This points to the need for strengthening institutional mechanisms for help-seeking.

While approaching the police and other formal agencies of governance may be forbidding for several women experiencing domestic violence, a potential case can be made for the role of intermediary civil society organisations. While several such organisations exist, the linkages with other units such as legal, financial, medical and psychological support are weak or absent.

Findings suggest that institutional mechanisms for reporting domestic violence must be strengthened and made more responsive to the needs of victims. It is possible to do this as the experience of Dilaasa in Mumbai and the very successful multi-sectoral model of one-stop crisis centres in Bangladesh have indicated. After all, how domestic violence is addressed is a critical barometer of India’s commitment to gender equity.

Sreeparna Chattopadhyay is an anthropologist at the Public Health Foundation of India, Bangalore and Suraj Jacob is a political economist based at Vidya Bhawan, Udaipur.

This article is a summary of their article in the current issue of the Economic and Political Weekly.